Scrambled filters, LFO outputs and a ‘toneblast’ switch: We go on a sonic adventure with some American originals. 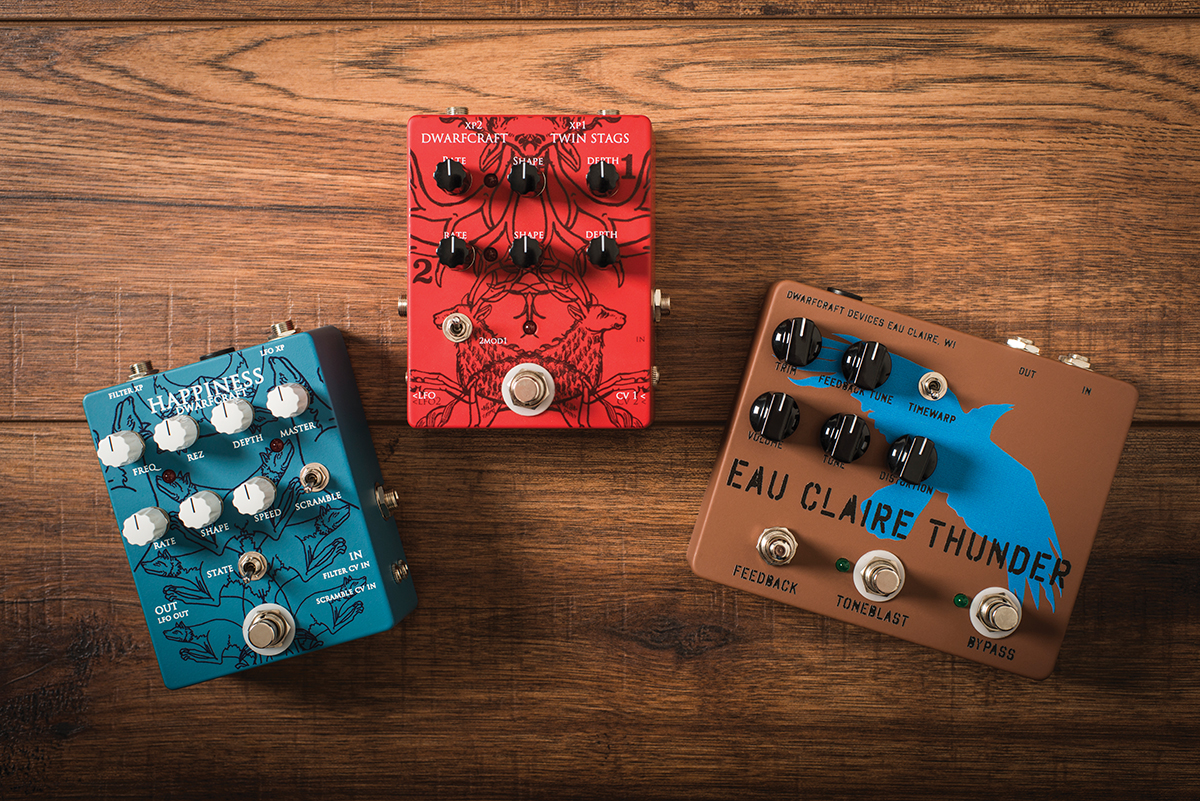 Dwarfcraft might sound like the world’s geekiest online role-playing game, but the only wizardry at work here is electronic. Dwarfcraft Devices is a genuine boutique operation and all the pedals are built in Eau Claire, Wisconsin, along with some synth modules… which might be a clue to understanding the firm’s approach to stompboxes. There’s a lot of analogue filtering, and many of Dwarfcraft’s products are designed to play as nicely with keyboards and synths as they do with guitars and basses.

Here we have the Happiness multi-mode filter and Twin Stags dual tremolo – both of which feature synth-compatible CV inputs and LFO outputs – plus the Eau Claire Thunder, a fuzz box with options labelled ‘toneblast’, ‘timewarp’ and ‘feedback tune’. If that’s not intriguing, we don’t know what is. 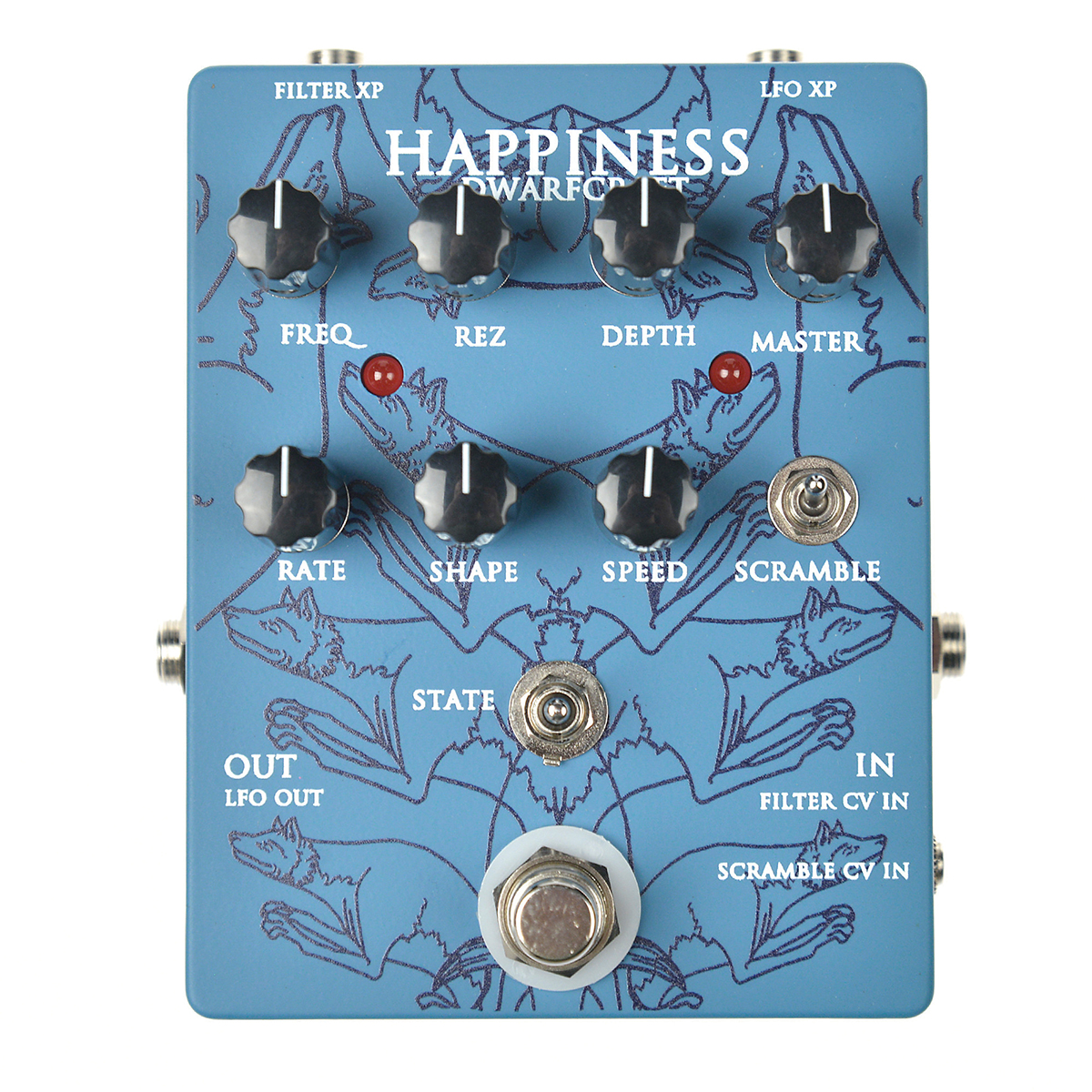 Look away now, blues-rock purists. The Happiness is inspired by the filter found in the Steiner-Parker Synthacon of the late 70s and recently revived by the Arturia MiniBrute. So it’s all about pulsating synth-like effects, with a triangle-shaped low-frequency oscillator (LFO) providing the heartbeat. It’s fully analogue.

The most important controls are those on the left-hand side: these are responsible for regulating the filter’s cut-off frequency and resonance, and the rate and angle of the LFO. Then there’s a three-way toggle switch for setting the filter to high-pass, band-pass or low-pass, and a speed control for the scramble mode that’s engaged by the switch on the right. This throws a stepped ‘sample and hold’ factor into the oscillation.

Two expression pedal inputs mean that you can use your feet to change the rate and/or cutoff frequency, and the two mini-jack sockets on the right side allow you to synchronise both standard and scramble rates to any device with a control voltage (CV) output. This could be handy if, say, you want the Happiness to pulsate in time with a drum sequencer.

Well, this thing is barmy. We did plan to start off with a simple autowah or phaser setting and take it from there, but looking for conventional sounds in here is like looking for financial advisers at a bog-snorkelling festival. If the Happiness has a characteristic sound it’s a sort of sci-fi ‘pew-pew-pew’ effect, but tweak a couple of knobs and it could become ‘wup-wup-wup’. The shape control lets you manipulate the attack/decay angle of the LFO – hard impact to the right, soft ramping to the left – but it’s very interactive with the depth knob, and much depends on whether you’ve set the switch to cut out the top end of the signal, the bottom end, or both.

There’s a warning in the manual to lower the output level before pushing the resonance control past halfway, which is where is starts to self-oscillate – it’s sage advice, because there are high-pitched squeals and chirrups involved and they get super-loud quite suddenly. The effect is even more sci-fi now, especially when you glitch it up with the scramble switch. We could play around with this for hours without even having a guitar plugged in. 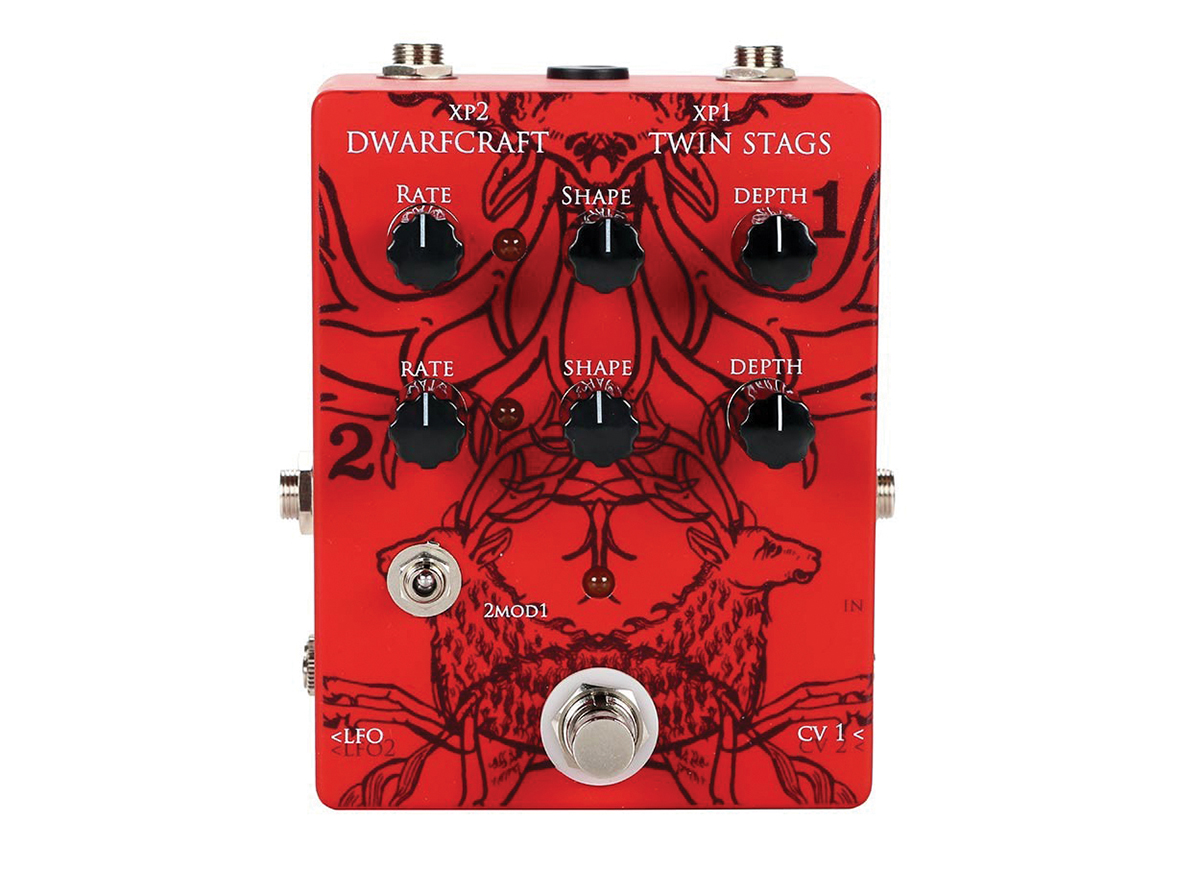 Okay, we all know what tremolo is (well, apart from a certain legendary guitar and amp designer who kept getting it mixed up with vibrato). The Twin Stags puts two of them in one box, each using a VCA-powered by a triangular LFO, and includes the option of using the second effect’s oscillator to modulate the speed of the first one.
As with the Happiness, ‘shape’ changes the lean angle of the LFO’s triangle, and the two-directional depth controls are at minimum when centred. Each tremolo has its own expression pedal input plus CV in and LFO out, and we’ll be getting the Happiness back out of its box to help test these out.

Well, there are no surprises in the basic sound of the first trem on its own – it’s as warm and throbby as you like, and as percussive or as strangely ‘reversed’ as you like, with plenty of more subtle options in between. Bring in the other circuit at a different rate and the two begin to trip over each other in quirkily arrhythmic ways – it’s quite beguiling, though you may struggle to find the same pattern twice.

Engaging the ‘2mod1’ switch allows you to run one trem at a rhythmic subdivision of the other, and this might ultimately prove to be a more useful effect; it has to be said, though, that it offers nothing like the same degree of control as the Stone Deaf FX Tremotron we reviewed back in our May issue. What you do get instead is synchronisation with other devices via CV – this works perfectly in both directions, and requires no more effort than plugging in a standard mini-jack cable. 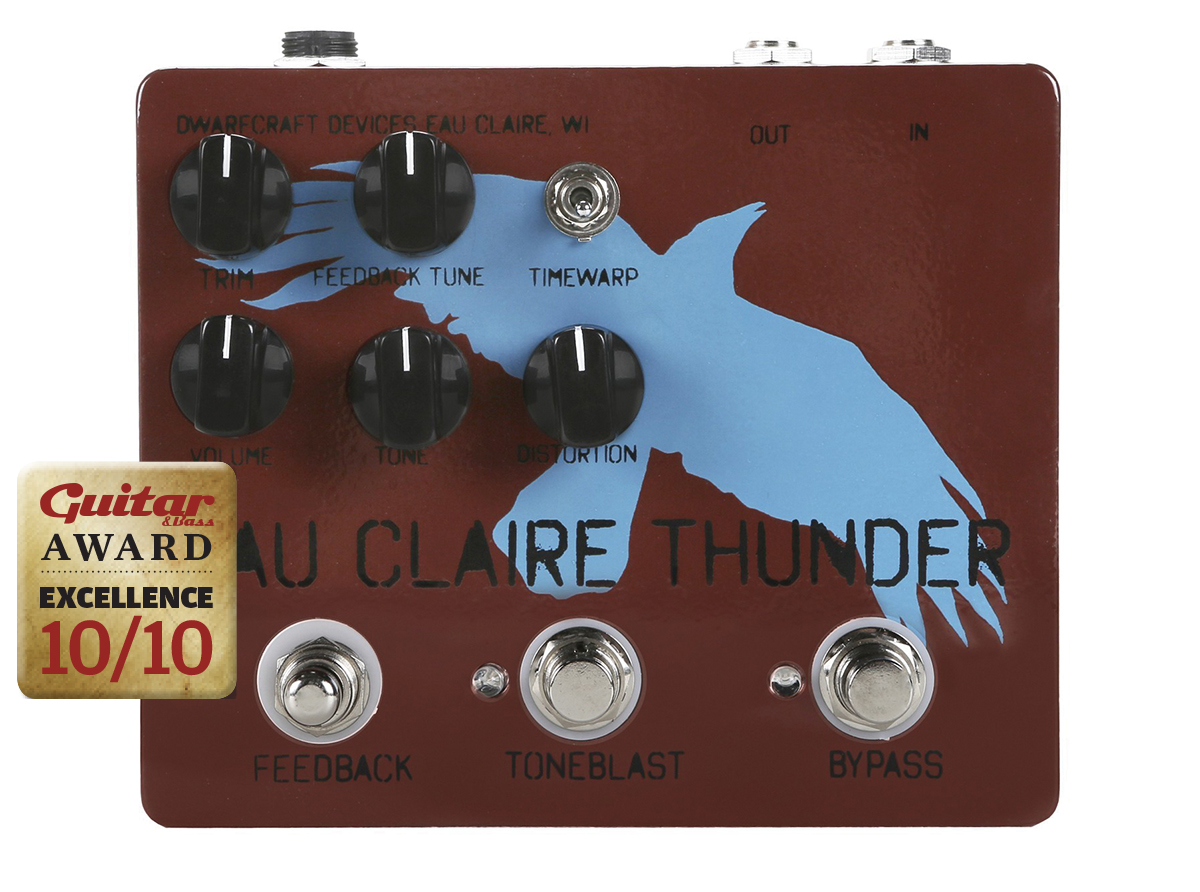 Dwarfcraft chiefs Ben and Louise Hinz decided to name this high-gain fuzz after their hometown’s bad weather, which is a novel way of expressing civic pride. It’s based on the green, Russian-made version of the EHX Big Muff from the 1990s – a fine pedal, with a big old bottom end and more midrange grind than the average American Muff.

You’ll notice that this unit has more than three controls, though. They’ve added a host of extra features: a trim control to preserve headroom with hotter pickups, a timewarp switch for vintage or modern voicing, a ‘toneblast’ footswitch that bypasses the whole EQ section, and a non-latching footswitch that engages an internal feedback loop.

We’re not going to mince our words here. The Eau Claire Thunder sounds absolutely, undeniably fantastic. It slaps down huge helpings of rich, deep, gurgling fuzz, with the emphasis on the low end – but not at the expense of silky treble when you want it. The voicing switch flips you instantly between pure grunge power and stoner-rock sludge, while toneblast gives everything a powerful lift that’s felt most acutely in the mids.

Internal feedback is the booze-soaked cherry on the top of this already delicious fuzz cake. Hold down the left footswitch and it slips into a sustained note that you can bend up and down with the tuning knob – it gets properlygrainy in the low notes, and even does a passable ‘accelerating F1 car’ effect. And, as with the self-oscillating Happiness, you don’t even need a guitar plugged in to have bags of fun. 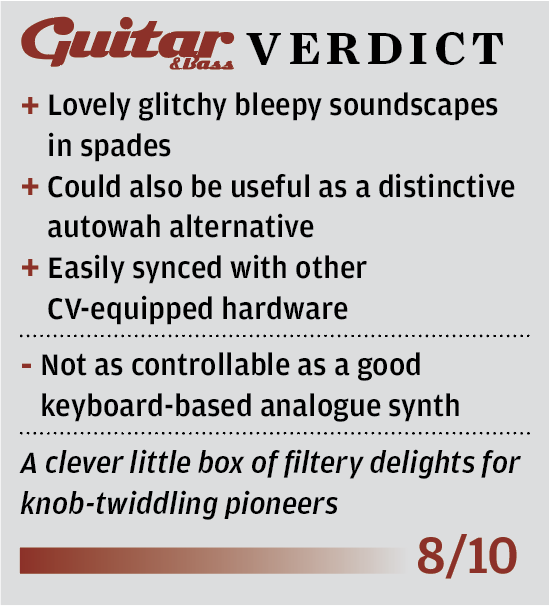 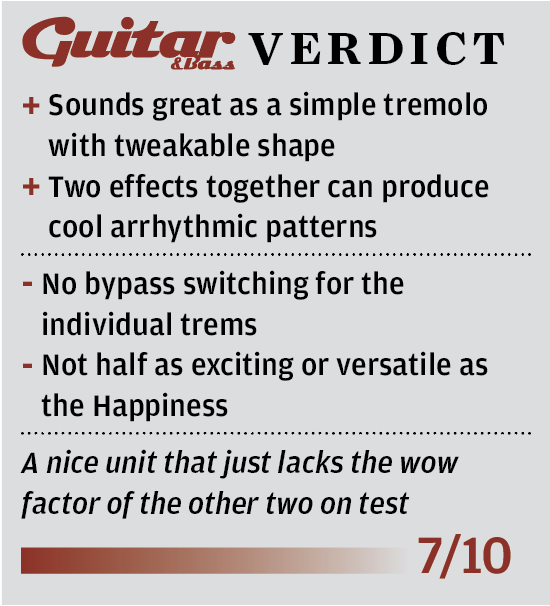 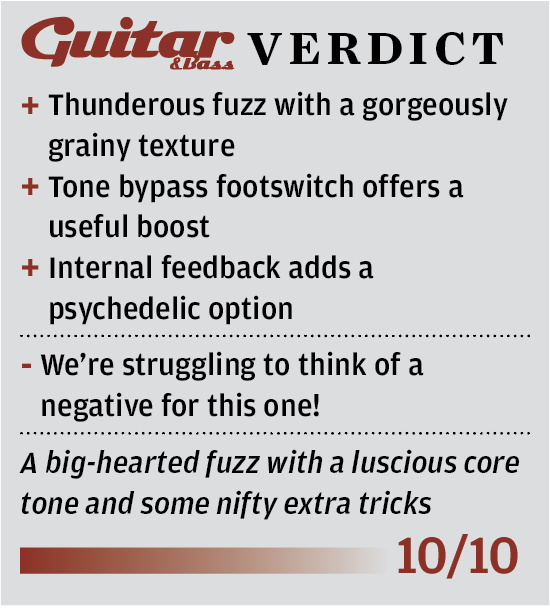