This take on the most famous overdrive of all adds knobs galore. 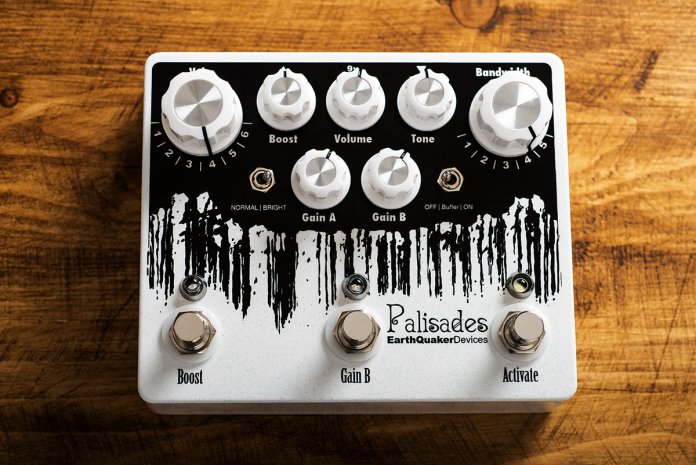 Unless you’ve just made the switch from The Bassoon Magazine, you’ll know that the Tube Screamer was originally designed and built by Maxon for Ibanez in the late 1970s, and the original TS-808 was a fairly low-gain overdrive with a light bottom end and a strong boost to the upper mids. Many other versions have followed, but the basic idea of the mid-humped crunch box has remained a staple for everyone from SRV to The Edge.

EarthQuaker decided to make its entry into this market with a bit of a statement… and that statement is five knobs, two rotary switches, two toggles and three footswitches. Don’t they know Screamers aren’t supposed to be versatile?!

The rotary switches are the really interesting part of the Palisades. The one on the left changes the clipping diodes in the circuit, while the one on the right offers five different levels of bass cut – the one part of the traditional TS sound that many players wish they could control more. Those extra footswitches engage a higher-gain channel and a clean boost, while the two toggle switches allow you to add extra sparkle or engage an input buffer for a tighter, feistier tone.

Heresy? Well, actually not – with gain low and bandwidth at full, it sounds much greener than it looks: smooth and crunchy, with enough of that famous ‘hump’ to cut through without getting harsh. The top end chimes sweetly, and there’s no bass drop-off at all.
The effect of switching through the voices isn’t overly dramatic, but you can feel the character of the distortion shifting, from hard and snappy to soft and fuzzy. The low end gets steadily thinner as you move down through the bandwidth settings, but even in the super-skinny zone there are usable sounds to be uncovered.

Gain B can be set for a whopping lift in overdrive without affecting the output level, while the booster does a fine job of making the whole thing louder – or more gainy if your amp’s just breaking up. This box could replace three others, and we wonder if there’s anything it can’t do?

Well, there is one thing. In a shootout with a Maxon OD-808, the Palisades is a better all-rounder, but it can’t quite deliver the same softly compressed attack that makes the real thing feel so fluid and addictive. You can be a Tube Screamer, or you can be more than a Tube Screamer, but maybe you can’t be both. 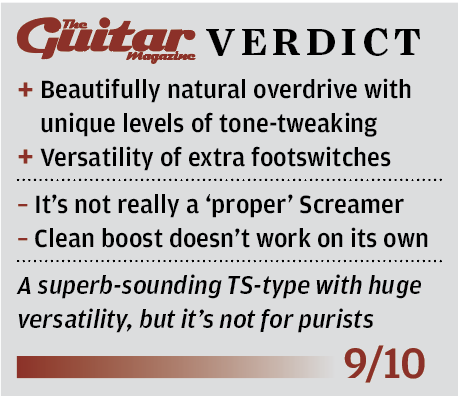