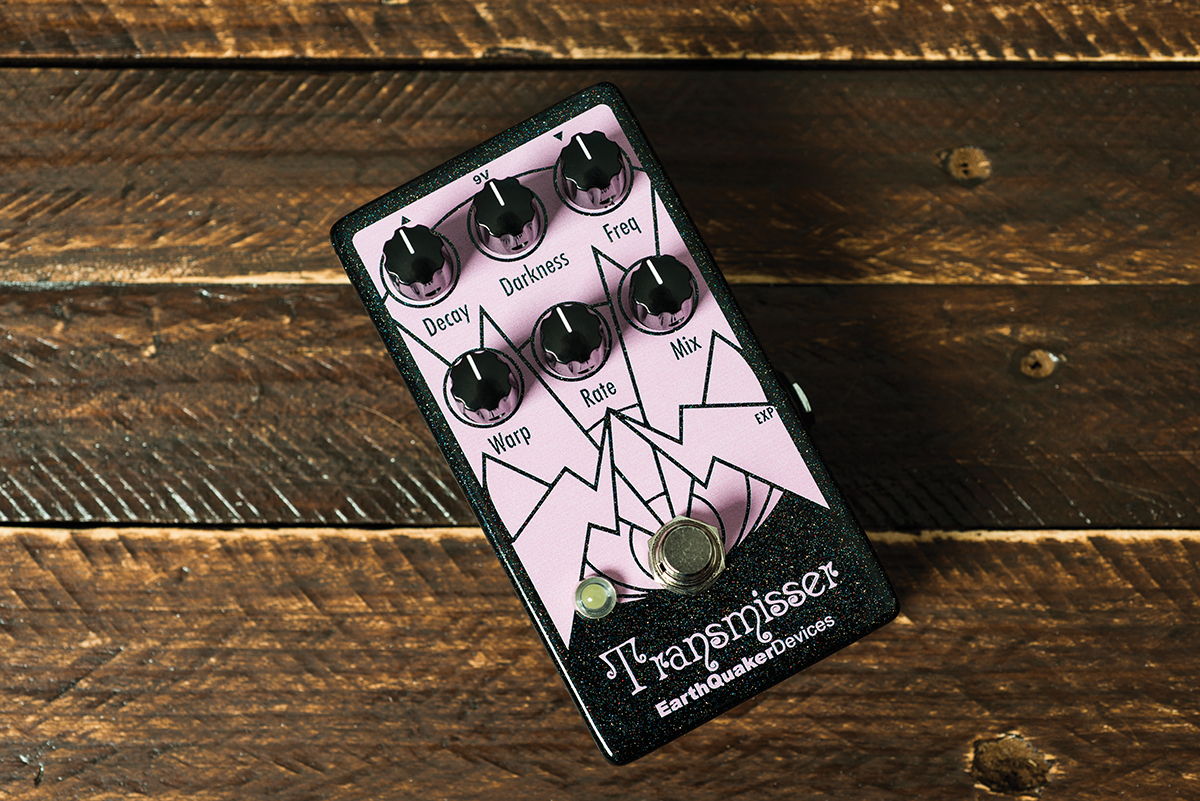 From humble beginnings in a basement in Akron, Ohio, EarthQuaker Devices has quickly become one of the most talked about names in the stompbox universe.

It all started with the Hoof fuzz, and in the 12 years since, the US company’s range has swelled to more than 40 pedals. EarthQuaker’s handmade effects are springing up on the boards of bands all over the world, and many guitarists have confessed to us their love of the brand this year.

Jimmy Smith of Foals uses the bonkers yet brilliant Rainbow Machine, and G&B Test Pilot Paul Gregory of Lanterns On The Lake has fallen for the ethereal delay and reverb charms of the Avalanche Run. Those beardy hipsters beavering away down by the Cuyahoga River have been making a big impression…

Earthquaker already offers several very good reverb pedals, so you might wonder what’s new about the Transmisser. It’s described as a modulated reverb with extra-long decay fed to a highly resonant filter, that is “the sonic recreation of blowing your signal to bits, shooting it through a black hole then beaming it back down on a cloud of cosmic dust”. Far out man. What it isn’t is an ‘authentic’-sounding pedal that delivers vintage amp-style splashy spring or studiously recreated room or hall reverbs. This is a stombpox for musical adventurers, hellbent on creating otherworldly soundscapes.

The Transmisser’s compact sparkly enclosure has six controls – decay sets the length of the reverb trails, darkness equals tone and freq governs the frequency of the low-pass filter – which can also be controlled by an expression pedal. Warp is a ‘system slew’ control, affecting the resonance and depth of the filter.

Rate controls the speed of the modulation and mix dictates the ratio of the wet and dry signals.

Refreshingly for a pedal with so many creative sounds onboard, operating the Transmisser is not a space flight that will require a degree in physics. The manual is a single A5 sheet, and after a quick read we were up and running. That being said, it’s a pedal that rewards tweaking – there’s an art to matching the frequency control to the key you’re playing in, for example.

Turning the frequency all the way anti-clockwise and keeping the mix control below noon produces beautiful ambient pads that will delight soundscapers and post-rock players; crank the frequency clockwise and you get a howling solar-wind sound. Turning up the warp control, meanwhile, yields the gargly tones of a cranked chorus.

The darkness control is usable throughout its full sweep, and the voicing doesn’t get muddy or shrill at either extremity. The rate knob on our review model was rather sticky; that aside, we preferred the ambient sounds in the first half of its clockwise sweep, although it can also produce ballpark rotary speaker effects, and fully wound with the mix up it’s like an alien ray gun. Add in an EBow and you get the sound of a field of chirping extraterrestrial cicadas ­– if that happens to be your cup of tea…

Some really cool effects can be had by turning the freq and rate controls while playing, resulting in a spacy whoosh; but without an expression pedal or incredibly deft foot control, it’s difficult to execute.

It’s also a little frustrating that there’s no separate control for the reverb – the fact that it can’t be isolated from the filter effect means the Transmisser is unlikely to work as your main or only reverb pedal. We had a great time combining the Transmisser with a looper, laying down clean chords and Bigsby bends underpinned with a swirling pad, then dialling the mix right back and kicking in some drive to solo over the top.

It’s a whole load of insane intergalactic fun, and belies the seeming simplicity of its humble dimensions and six controls. Mission accomplished, EarthQuaker.