Eastman’s Antique Varnish electrics have caused a stir in these parts of late. We find out if the company’s acoustics offer a similar blend of great tone, vibe and value… 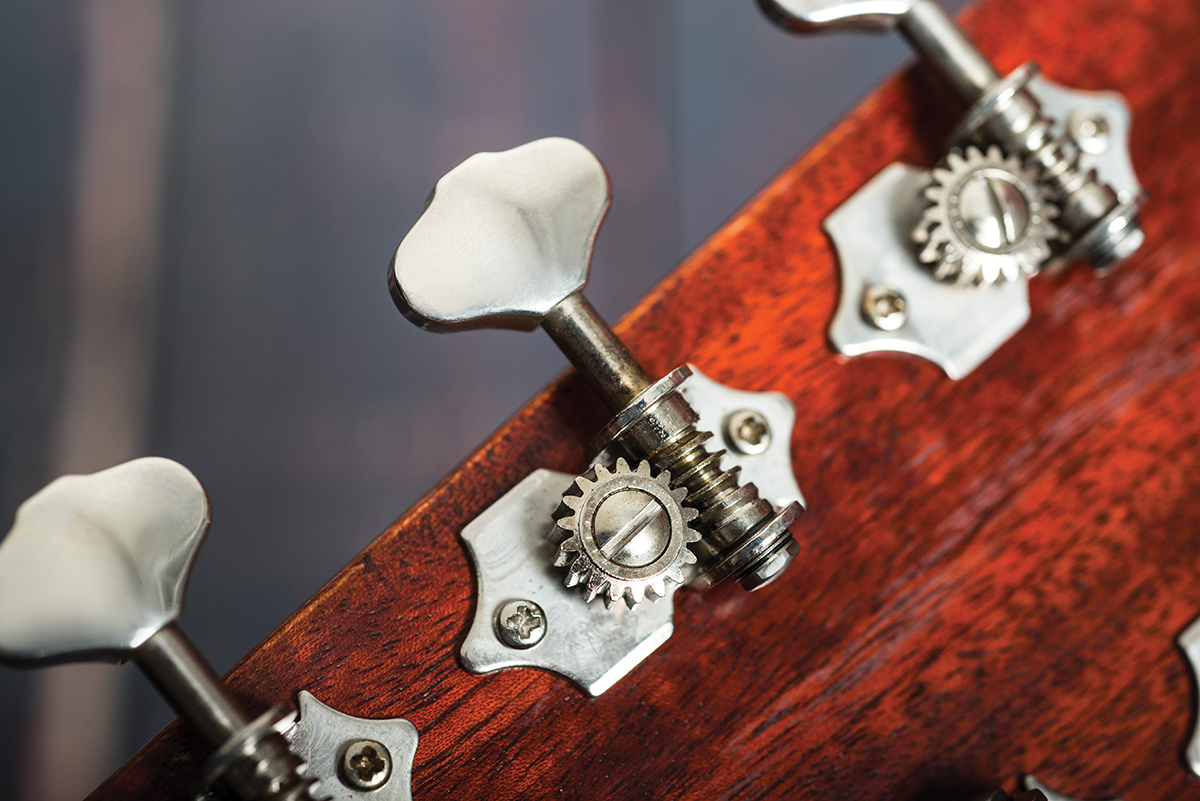 Last month, we mentioned in our review of the fabulous Atkin ‘The Forty Three’ that artificially aged acoustic guitars were scarce compared to their electric cousins, so of course, a month later another one lands in our laps!

However, as you may well remember from the Antique Varnish SB59/V electric that we looked at back in our May 2017 issue, Eastman’s attitude to artificial ageing is very different to the treatments you’ll see on other guitars.

We detailed the process at length back in May, but suffice to say, Eastman’s aged guitars look well used, without looking abused – and so it is with this acoustic.

The finish isn’t nitrocellulose, so there’s no checking or that characteristic jagged-edged rub through. Instead Eastman’s process involves six distinct steps starting with a grain filling basecoat, then colour application, followed by French polishing. The coats are sanded as they’re layered to keep the finish as thin as possible. You should also note that while shellac is a traditional finish for classical guitars and violin-style instruments, it’s comparatively soft, easy to wear through and offers minimal protection.

However if you like the idea of developing a personal patina on your instrument, and doing so quickly, shellac is ideal. The result is an acoustic that looks like its been around then block, but well looked after, too. 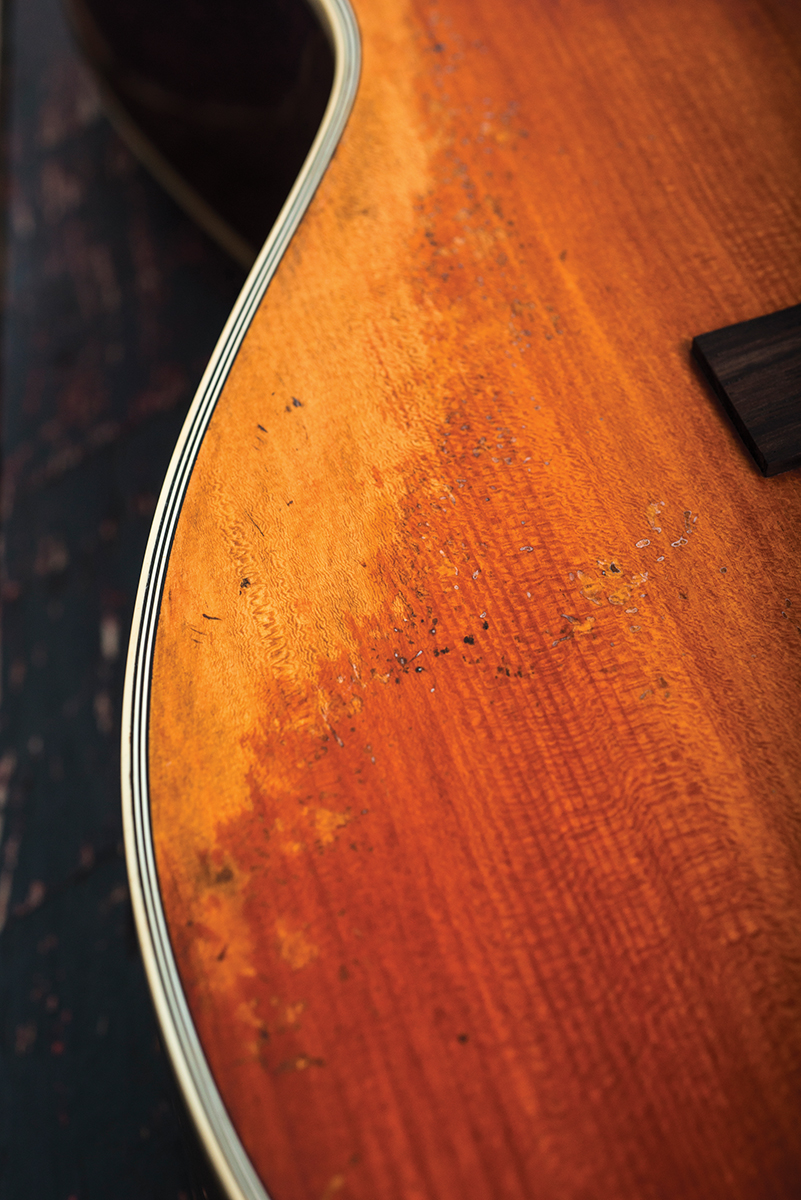 The colour is a particularly attractive shade of muted cherry and appears to have been hand rubbed into a subtle burst front and back.

The ‘play wear’ on the back of the neck and the lower bout is very convincing and even under close scrutiny it looks completely authentic. The top’s rubbed area reveals an amber base coat that looks like something you might see on a 19th century Martin – we’d certainly be interested in seeing that as a finish option on its own. 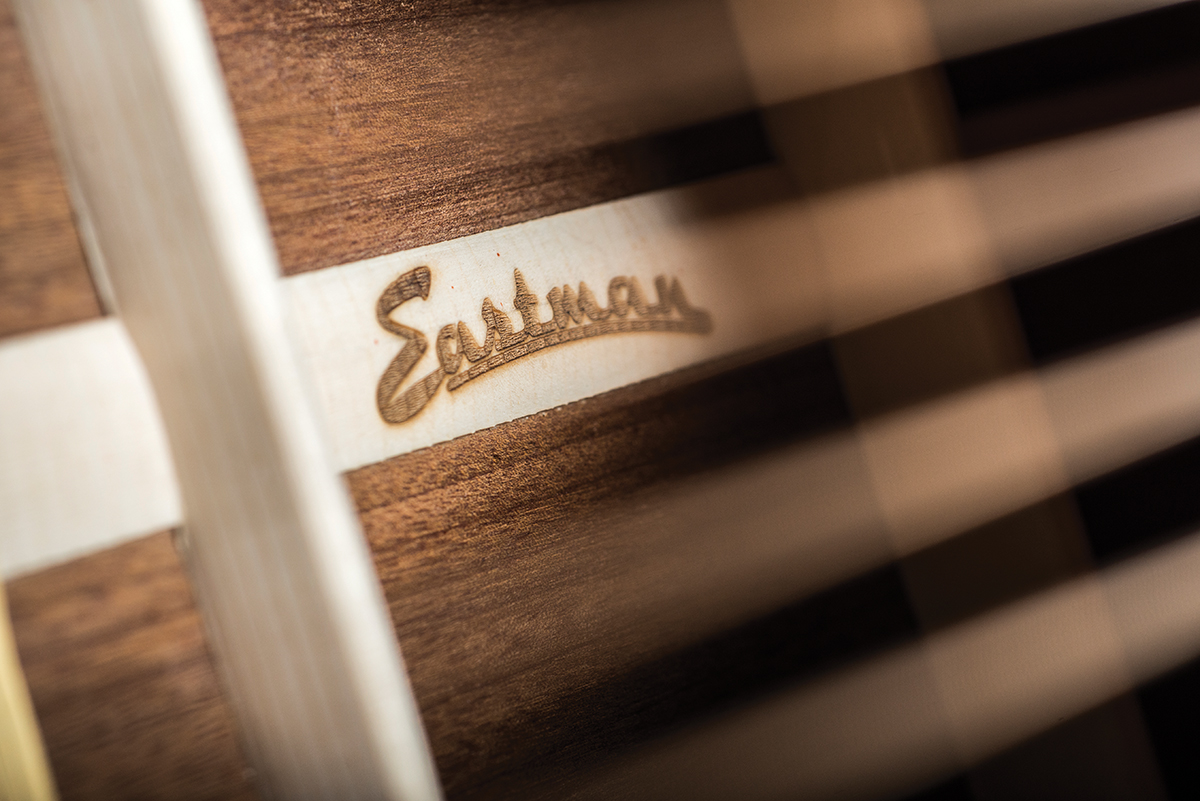 Finding plain, off-white binding is no easy feat – as this reviewer discovered during our recent Gretsch Anniversary conversion – but here it’s really convincing. It’s nothing fancy – just alternating layers of black and off-white – but it’s accurately done and neatly scraped to provide contrast with the tinted colour coats.

While this feels like a guitar in the boutique domain, there are some hints at its real-world price tag. The faux binding around the soundhole is finer in concept than execution and the finish around the fingerboard tongue is a little scruffy.

Similarly, the patchy stain on the bone nut and saddle walks the tightrope between appearing to be an example of simulated distress or a production oversight. 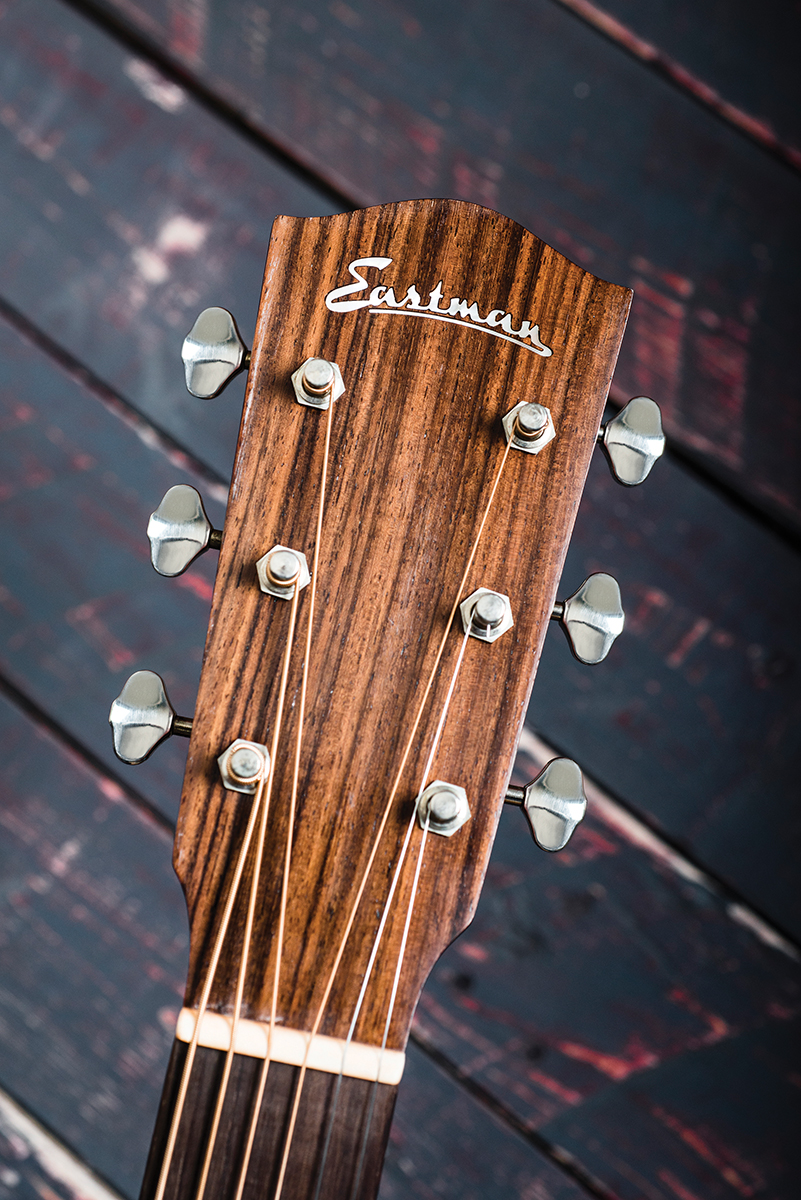 There’s definitely no oversight with the exquisitely carved stacked heel and superb fretwork, however, and the pearl dots on the pale rosewood fingerboard raise the standard further. Heading to the side of the ’board, the shiny white side dots might be easier to see than off-white, but they do feel a little incongruous next to the aged binding.

The tuners are open-geared examples from Asian OEM hardware giant, Ping – but pings or noises of any kind are thankfully absent when in use. They’re super smooth in feel and make accurate tuning speedy and stress free.

Internally, things look good, with fairly narrow and tall back braces, and the Eastman logo branded into the back’s centre strip. Since the sides are solid mahogany, like the back, strips of rosewood have been glued between the front and back kerfings to restrict progress in the event of accident-induced splits. 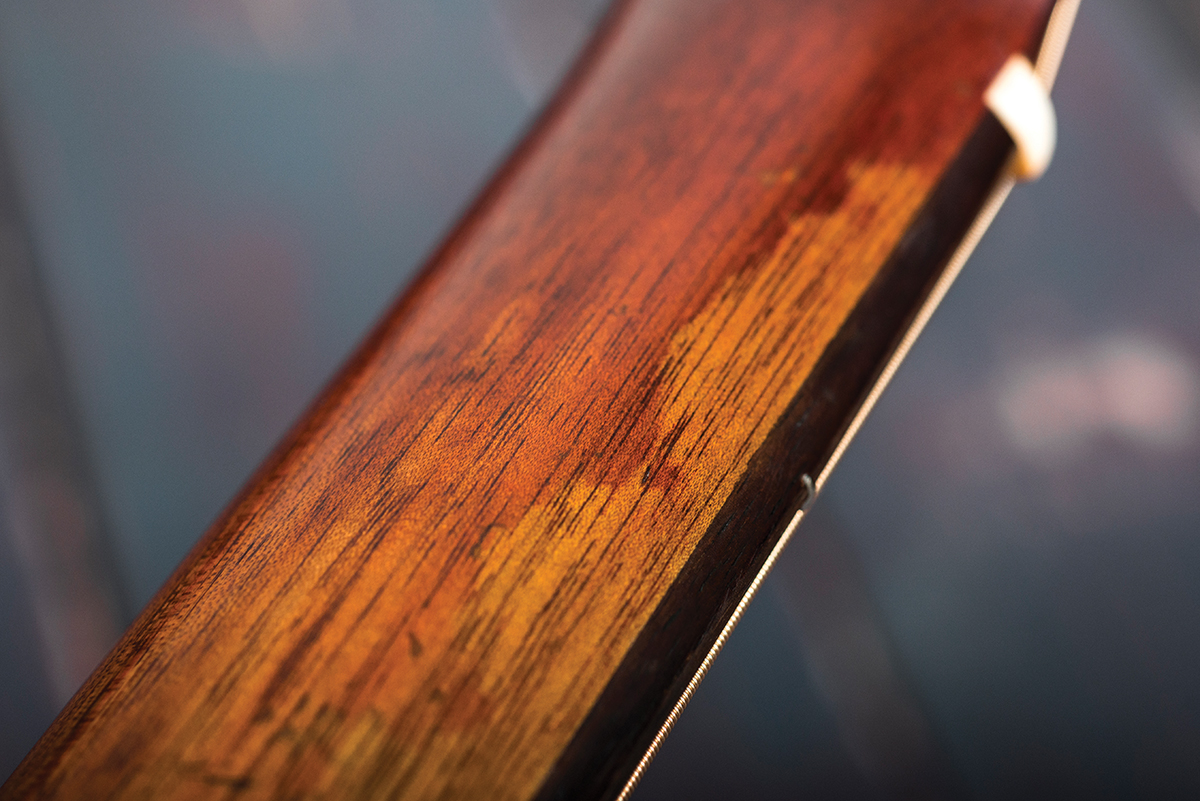 The neck features a simulated wear pattern that looks the part

In Use
Sitting down to play, we find that the E10OOSS/V is a tad neck-heavy, despite those lightweight open-gear tuners. In truth this is probably more down to the light weight of the body than any excess weight or a heftier than usual dual-action truss rod – it’s a very minor dip anyway.

Measuring 14.5 inches across, the body size is narrower than Martin’s 000 and OM models, but at 4.375 inches, the body is deeper, so there’s plenty of internal volume and it’s extremely comfortable to hold. Neck depth is medium and while the ‘C’ profile doesn’t exactly ooze vintage-style character, it has a very playable and appealingly familiar feel. 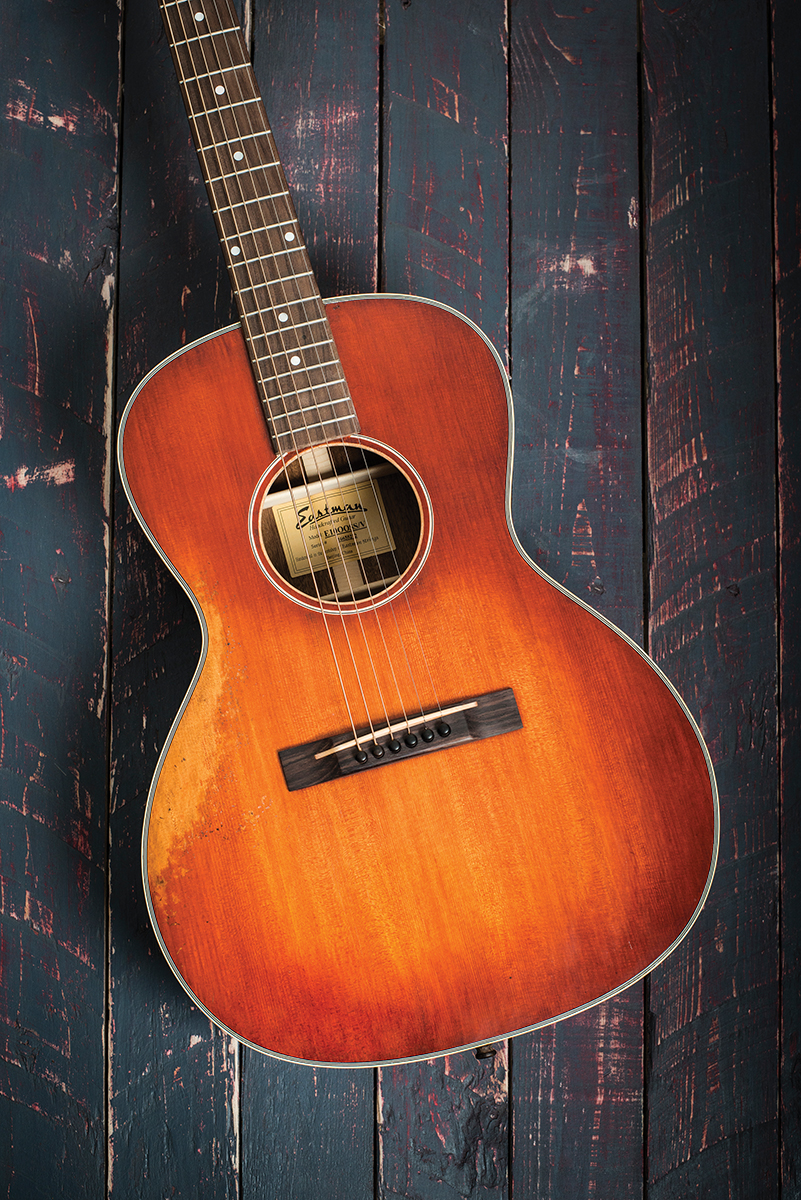 Tapping the body elicits a very lively back with several clear notes. You could conceivably label up each area like a steel drum to play tunes on it. The top produces fewer notes, but it has a musical ring and you can feel a highly encouraging kick back when you tap just behind the bridge.

Starting with open chords, the E10OOSS/V immediately impresses with an unusually loud, full and harmonically rich tone. It’s loud enough when you’re playing it, but for the full effect you need to hear the E10OOSS/V when someone else is playing to appreciate how well this guitar projects. Quite frankly it’s a bit of a tone cannon.

These delicate open-gear tuners fit perfectly with the retro vibes

However that doesn’t mean it’s merely loud and brash. Played fingerstyle the E10OOSS/V is crisply defined, precise and very complex. The tonal signature is bright but never thin, as the body’s internal volume provides a full midrange.

Although not thunderous, the bass is amply deep to underpin bluegrass rhythms and alternating basslines. Better still, even with the regular 12 gauge strings the low end holds together superbly as the E10OOSS/V is dropped to open D and C tunings.

Excellent string-to-string balance keeps picking easy and strumming dynamics consistent. The E10OOSS/V is one of those acoustics that seems to produce more than the sum of its parts. Play two notes and it sounds like a full chord, play three and the overtones begin to swirl, then play a chord and the harmonic assault is almost like acoustic overdrive. Think beefed up parlour meets Martin treble with a hint of Gibson woodiness in the lower midrange.

Without being a strict vintage clone, the E10OOSS/V has an old school tone that doesn’t too closely resemble any of the classic brands, and demonstrates Eastman’s considerable expertise building acoustic instruments. 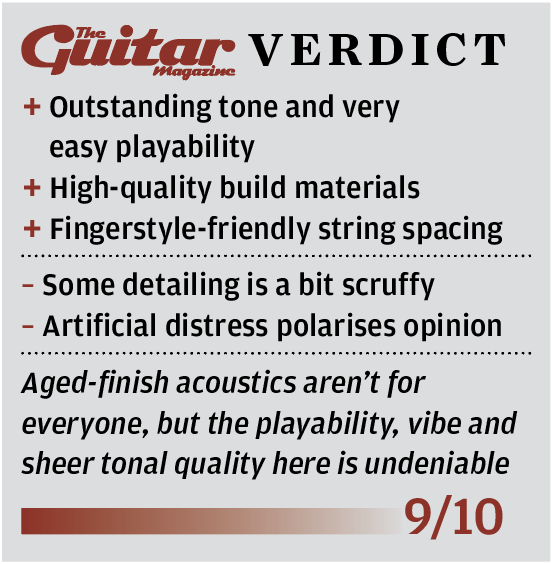