Are you still searching for the daddy of drive pedals? Marcus Leadley checks out the latest hand-built British contenders from Echoline. 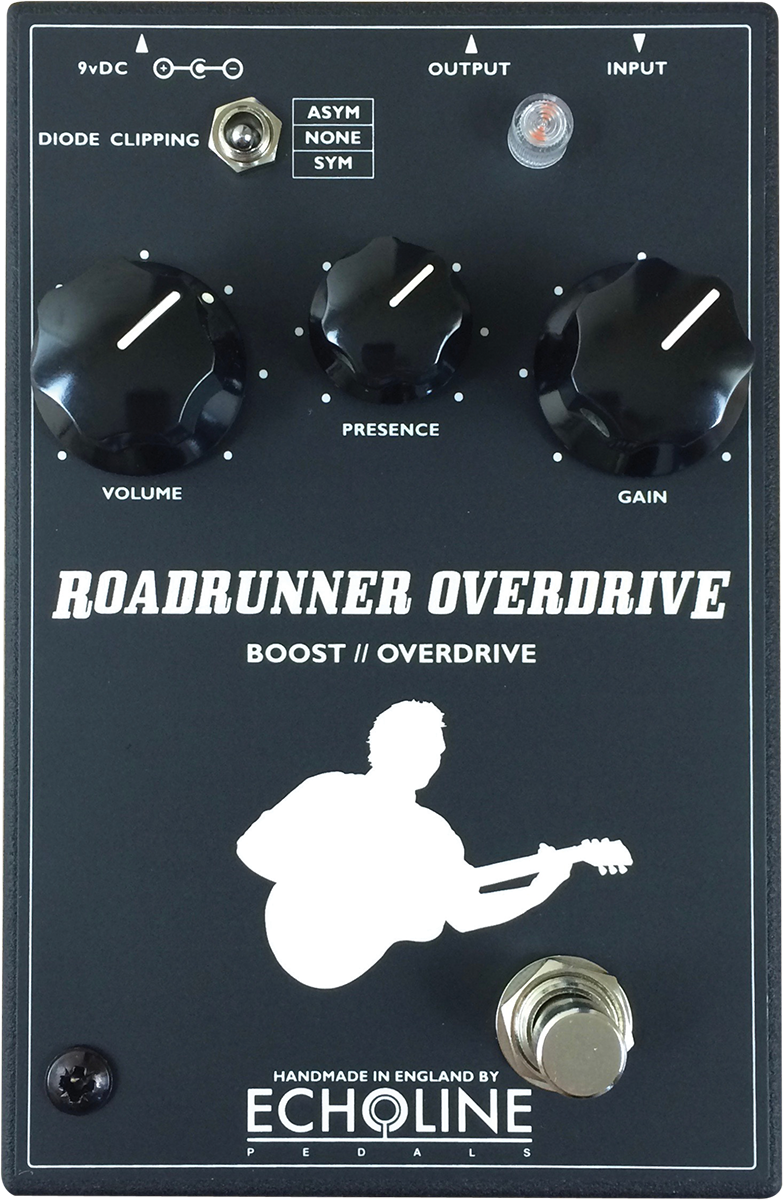 Echoline Pedals is a relatively new venture for Andy Eales – something of a labour of love for an English luthier with a passion for drive pedals. The concept of the Roadrunner Overdrive emerged back in 2009. Early models were built mostly for friends and the electronics were squeezed into the company’s standard small MXR-style enclosure.

The pedal gained a good reputation, but rather than take up an offer to develop the unit into a mass-market product, Eales decided to go in a completely different direction. Today’s Roadrunner is an entirely handmade unit built using the highest-quality components. While Eales is responsible for the Roadrunner’s circuit, his colleague Steve Howard designed the Echoline Germanium and Silicon Drive pedals.

Like all Echoline pedals, the Roadrunner is housed in a compact (144x94x50mm) enclosure. It’s a fairly common, though less familiar, size and its stable construction means it won’t flip over and follow you around the stage. The jack sockets and nine-volt DC power port are top-mounted so, when cabled up, the Roadrunner takes up around the same amount of space on a board as a standard Boss pedal.

There’s no nine-volt battery option, so there’s no reason to open up the pedal – indeed, it’s sealed with paper tags and breaking these voids the generous three-year warranty. Having seen inside the review unit, we can attest to the quality of the components (including full-sized Alpha pots) and assembly – and the fact that the circuit board has been spray-painted to help preserve its secrets! 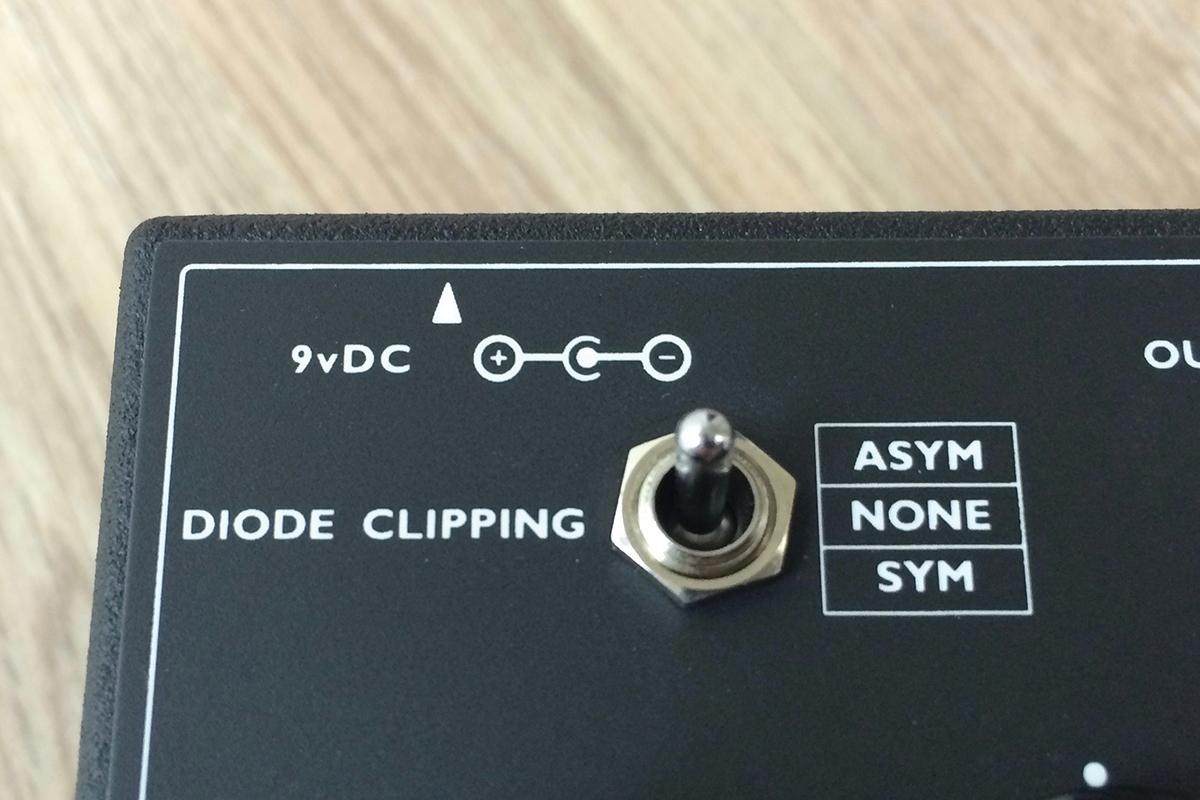 The Roadrunner’s pots feel great and the sharp click of the stomp switch lights a bright pink LED. With the diode clipping mini-toggle set to normal (diodes out of circuit), the volume at 10 o’clock, presence at about 12 and gain a bit below nine, you get an output extremely similar to the basic character of your setup. However, the Roadrunner is not ‘transparent’ (in Eales’ opinion, no circuit ever truly is) and the design is tweaked to excite the core guitar/amp sound in a musical way – this is one of those pedals that many players (Brinsley Schwarz for example) never turn off, so it becomes a core element of their sound.

The Roadrunner doesn’t have to add gain, so it essentially conditions your sound. And how does it sound? By way of a slightly unusual analogy, it has an effect a bit like cleaning your windows: the view is the same, but everything seems a little more focused and clear.

Psycho-acoustically, the sound appears to come forward to occupy the space immediately in front of the speaker cones rather than residing on their surface. There’s no obvious compression effect, but there is an appealing evenness and clarity.

The fun really begins, though, when you start to tweak the gain control; the increment between 9 o’clock and 12 is incredibly smooth sounding. You get near-total control over the breakup zone’s characteristic and you can work the playing dynamics beautifully.

Beyond 12 o’clock, the overdriven tone really starts to kick in. It hits a sweet spot between 12 and 2, where it delivers beautiful, classic electric blues/rock/glam/boogie voices.

While adding gain results in a volume hike, this can be reined in with the volume control without any loss of tone or character. Maxing out the gain control gives you a killer lead voice with bags of character. The presence control works with the exciting top-end frequencies, and it isn’t the boost/cut variety – this is pure boost, so it adds a bit more gain when you get into the upper registers – and there are some searing lead sounds to be had.

If you want to knock back the tone, the Roadrunner functions well with the guitar’s onboard tone controls.

Adding the clipping diodes into the circuit adds compression, and with compression comes a loss of dynamics, which can manifest itself as a reduction in volume. This isn’t an issue in the studio (where this option excels as a tone/character-shaping utility), and live players can compensate with the volume control. To clip the signal, you essentially make it ‘bigger’ using the the gain control, and then the volume control can be used like a master volume.

Arguably, this is more of a natural clip on the signal. If you don’t drive it too much, that’s where the pedal operates at its sweetest and most organic sounding. The Asymmetric setting is a little chewier with a softer top end. Symmetrical is slightly more dynamic, with a little added brightness in the top end. Both options make the gain control feel more aggressive, and the early onset of breakup is ideal for crunch chords and lead voices of diverse character.

This is a pedal to stamp on when you want to let your audience know you’re serious! Even at its minimum gain setting, there is an edge of drive. It’s subtle at this point, but it gives the clear impression that what it really wants is to be unleashed. Sure enough, tweaking the gain control brings on big smiles; it’s a rock monster and it will take you to places where the Roadrunner fears to tread. 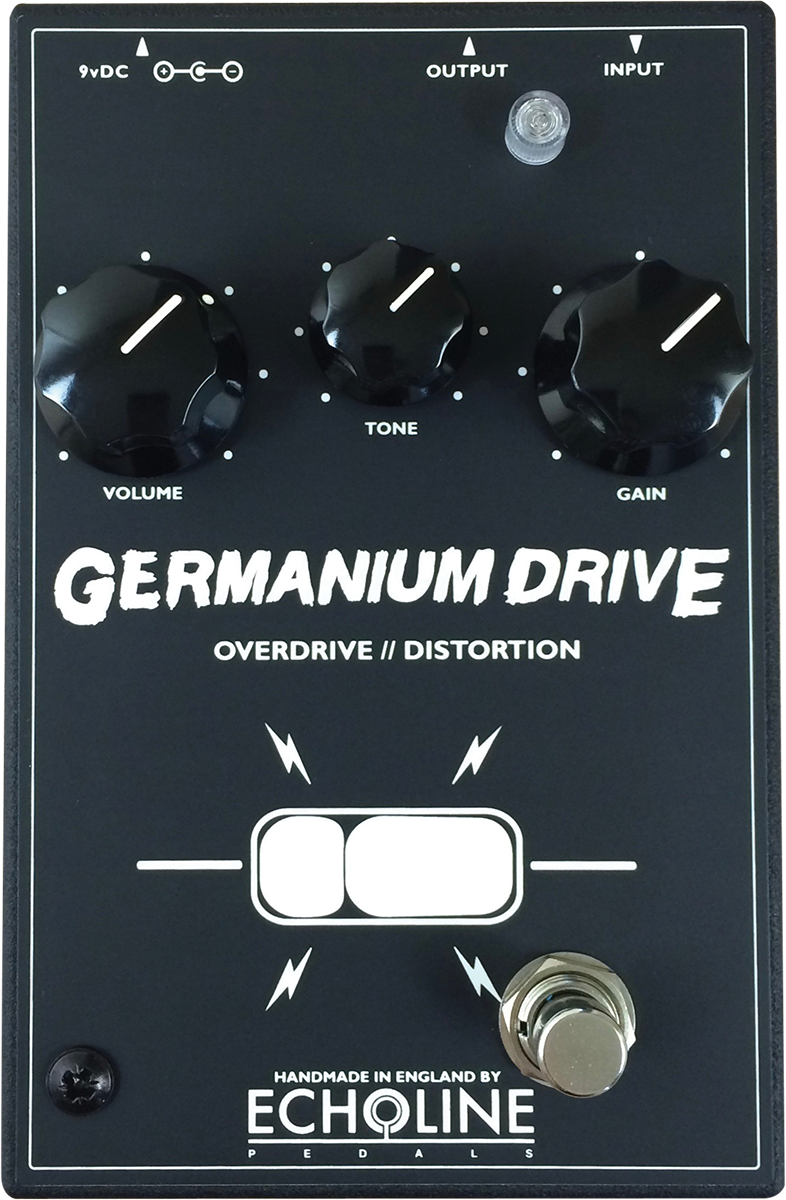 As the name suggests, the Germanium Drive uses germanium diodes to clip the sound for a vintage-style flavour with lots of natural harmonics. It’s not designed to give you the tight heavy metal sounds that its sister the Silicon Drive excels at – overall, it has more of a 70s-style rock sound. Keeping the gain down allows for plenty of manipulation using the guitar’s onboard controls, so flicking through pickup options allows you to achieve glassy highs or smooth crying-tone mids. 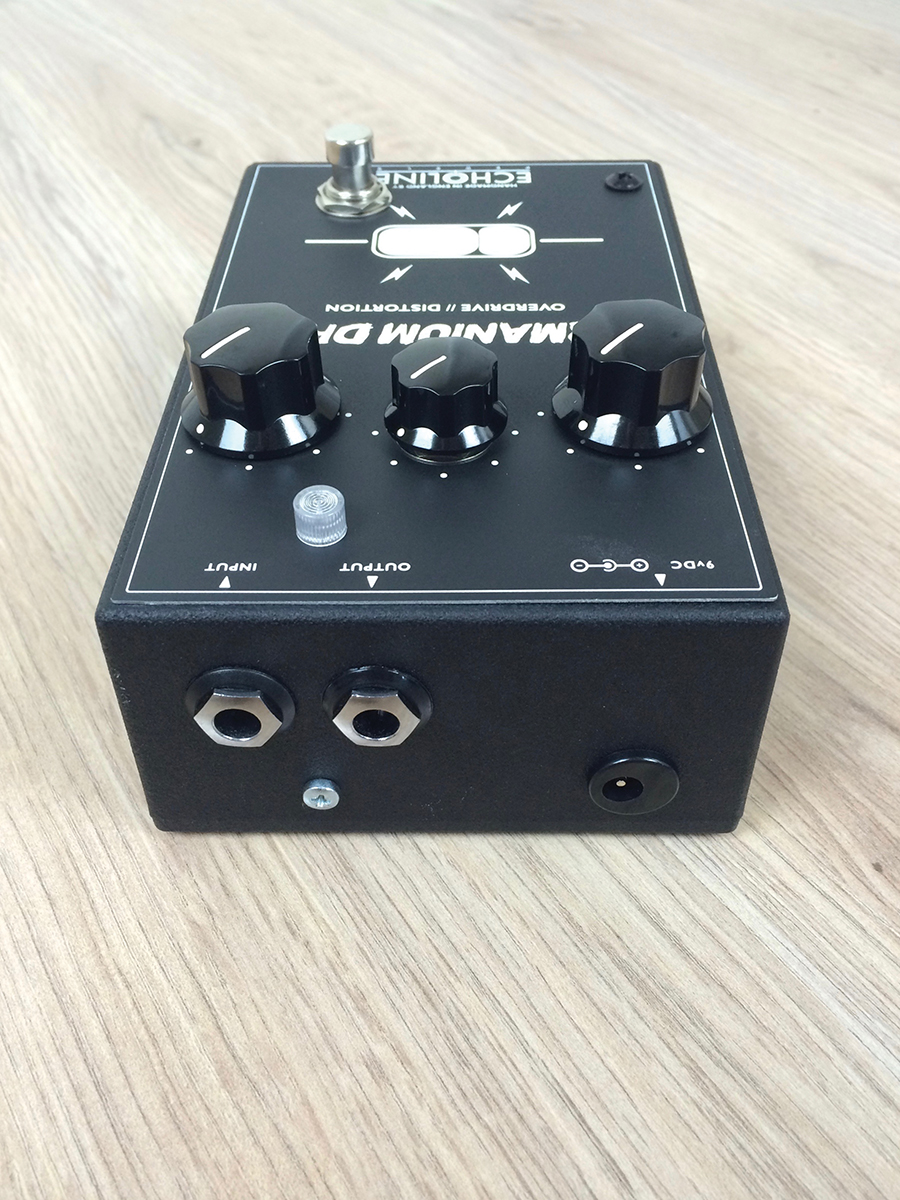 The Germanium Drive’s tone control hits neutral at around 12 o’clock. It’s a well-designed tool that’s very subtle and musical in operation. The overall circuit is built around a central four-gain stage concept and Eales says that it functions very much like an amp, using the transistor stages in a similar way. The pedal has a buffered bypass (the Roadrunner is true bypass), so there’s no switching noise with high-gain settings. 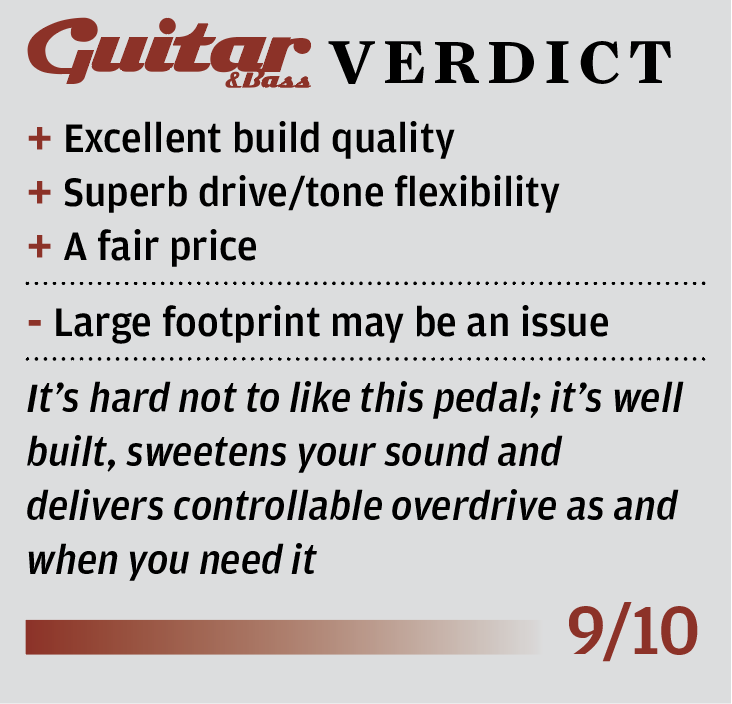 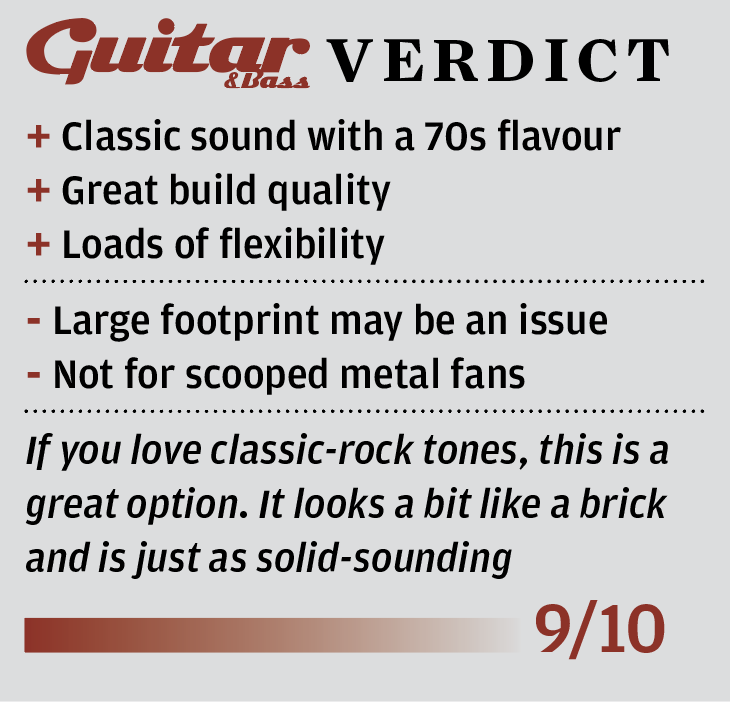