This artfully minimalistic unit wants to take us back to the birth of fuzz – we set the controls for the heart of retro raucousness. 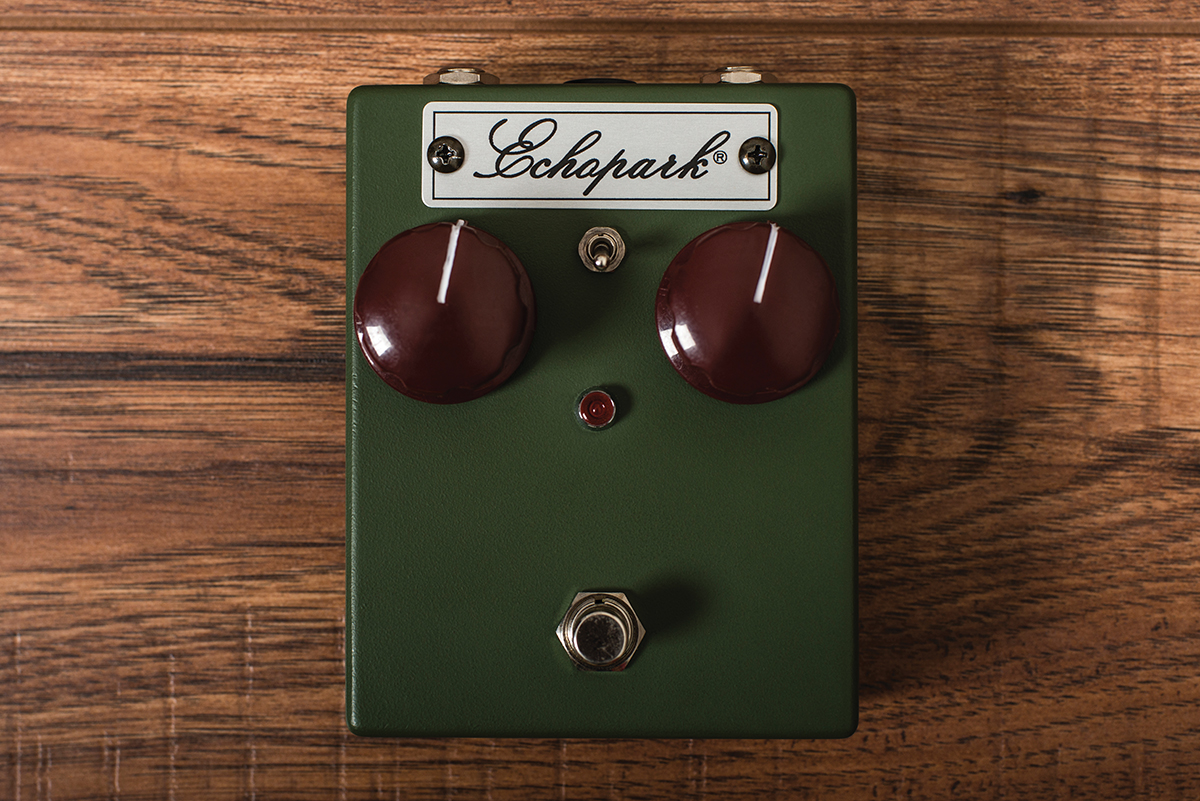 If you don’t think this pedal looks cool, you might want to get your eyes tested. A chunk of battlefield green-painted steel with two giant knobs, and no further ornamentation beyond the maker’s name on a metal plate – it’s the sort of thing you could imagine finding at the back of a cupboard in Abbey Road.

So, this is another boutique fuzz? Well, yes, but while the market is chock full of smooth, buttery fuzzes, this has no interest in butteriness – in fact it’s probably lactose-intolerant. Inspired by the very first 60s fuzzes, this one’s all about snarl.

The ‘Dual’ part is due to two separate transistors – both silicon – creating two different flavours of fuzz that are blended together within the circuit. But it’s a bit more complex than that. With the blend knob shy of 12 o’clock, the two fuzzes operate in parallel; beyond there, the first is being pushed into the second for a richer, heavier distortion. There’s also a toggle switch for boost.

Echopark is better known for guitars, but this is immaculately hand-wired, using what we’re told are rigorously tested high-quality components – though we’ll never know that for sure, as most of them have been encased in black gloop to deter the cloners. If you appreciate attention to detail, note that even the screw heads on the baseplate have been painted to match the enclosure. 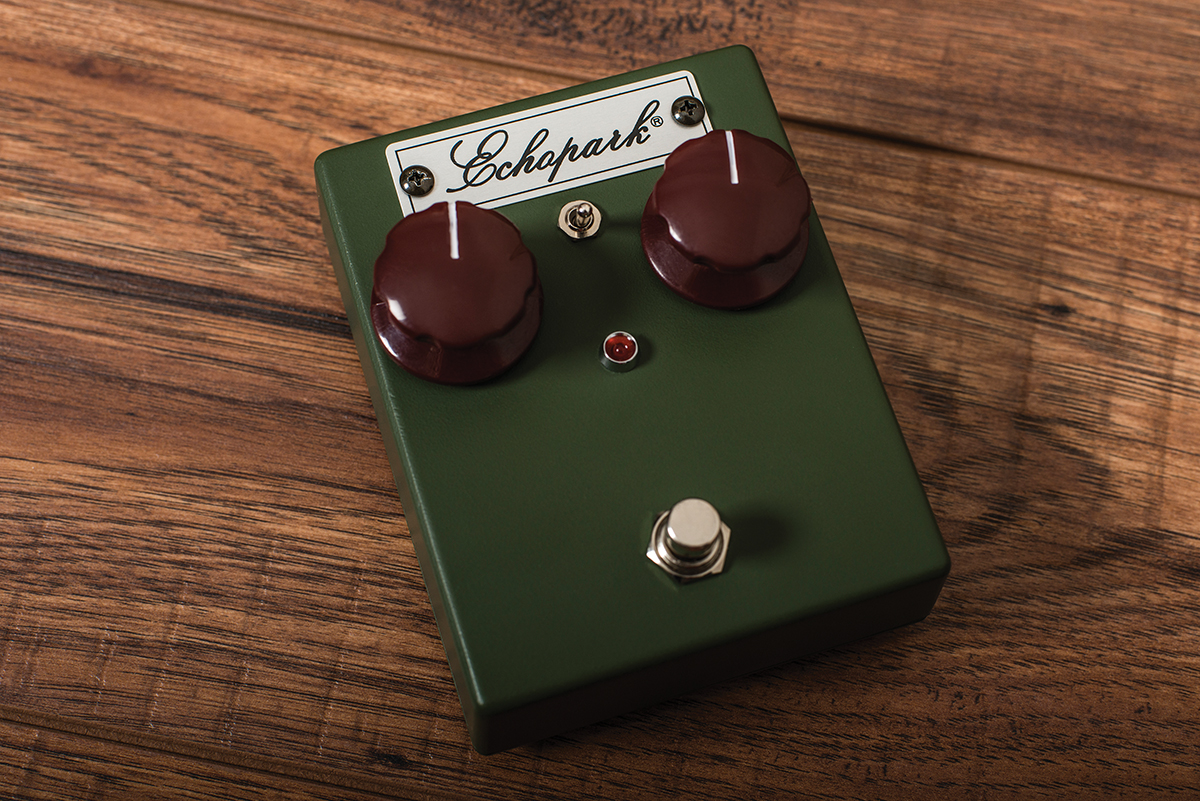 In Use
When it comes to 60s fuzz, all roads lead back to Keef and a Maestro Fuzz-Tone. With that in mind, the first thing we try is the …Satisfaction riff. The original was famously Keef’s attempt to emulate a horn section as a guide track, so we’re expecting something pert and brassy here – and that’s just what the F-2 delivers.

There’s not much sustain on the left side of the blend control, and without boost, separation between the two fuzzes – one thumpy, one fizzy – is quite disconcerting and not necessarily likeable. But flicking the toggle switch brings the sound together, and it’s a lo-fi delight.

Single notes can sound almost conventionally fuzzy, albeit more mid-focused than usual, but hit an open chord and you’ll run smack into a wall of joyously jarring harmonics.

Pushing the blend dial into cascading mode makes things more gainy, with compression that can sag at times, and also tightens up the maelstrom into something a little more manageable. This pedal really is all about the ‘ripping cardboard’ midrange – yet it’s never harsh on the ears, because the treble response remains surprisingly sweet. 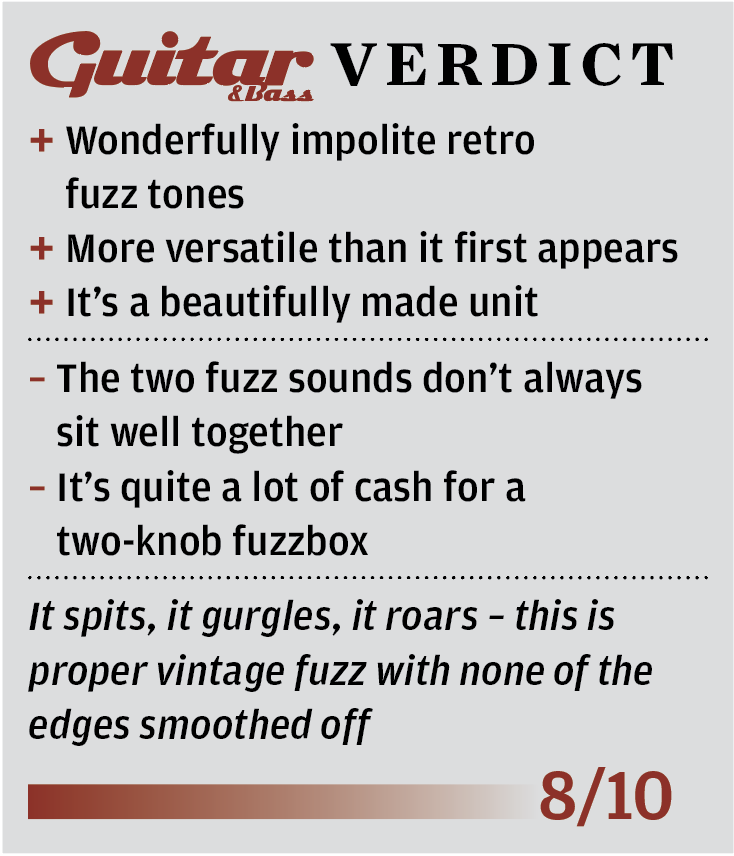