Jimi will forever be the guitarist’s guitarist – and these four trippy-looking miniature stompers are designed to bring his fuzzed-out, spaced-out magic to modern pedalboards. 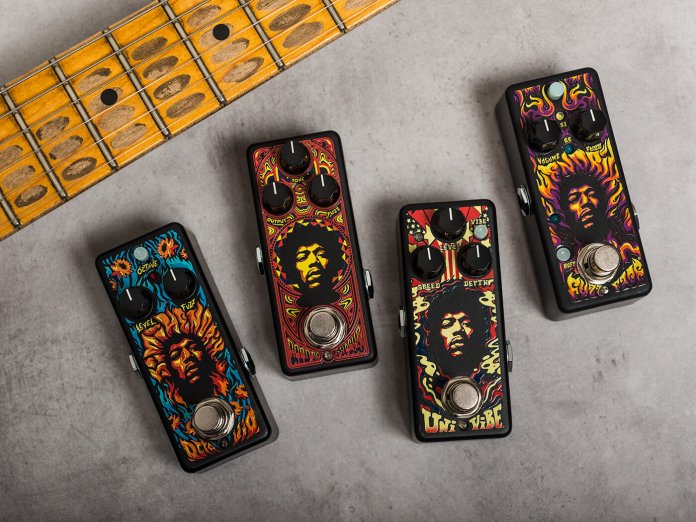 Some people worship Jimi Hendrix for his mastery of the electric guitar. Some feel he’s underrated as a songwriter. And some just see that video of him playing The Star-Spangled Banner at Woodstock and want to know how the hell he made all those wild, hippy-scaring noises. If you’re in the third group, this colourful quartet of mini-pedals might just have some of the answers.

Dunlop has been putting out products approved by Jimi’s estate for some time now, including signature wahs and assorted Fuzz Faces that are actually face-shaped, plus the four full-size Authentic Hendrix pedals on which these units are based. So what’s new?

The differences are mostly cosmetic – as well as being titchified, the enclosures have been given a splash of psychedelic colour by British design studio Ilovedust – but two of the four also get some handy bonus features not found on the standard silver-cased models: the Fuzz Face has switchable silicon or germanium distortion plus true or buffered bypass, while the Octavio Fuzz has an option to cut out the octave effect. 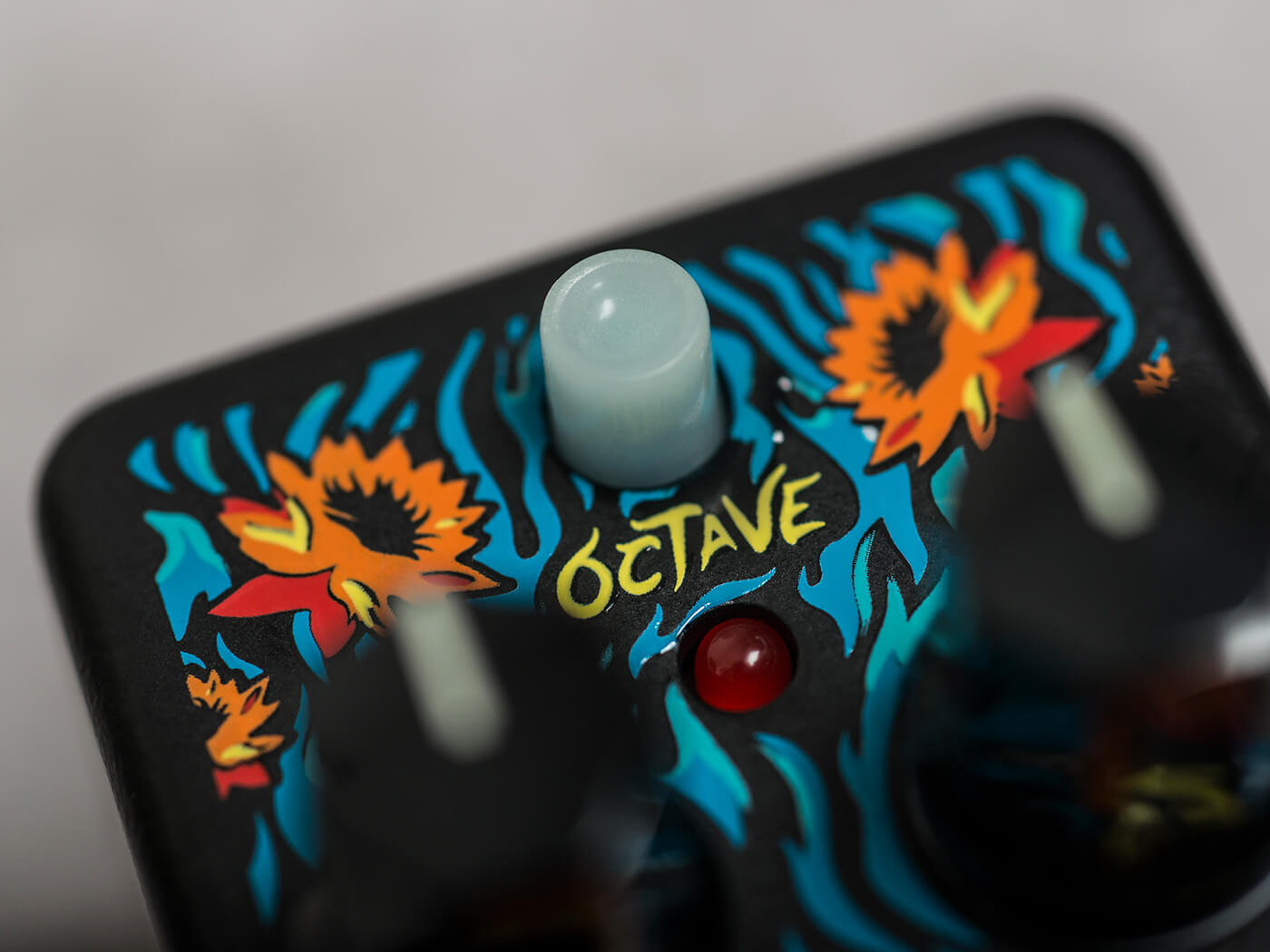 These are useful modernising touches, but the four circuits remain rooted in the 60s stompboxes that were such a big part of Jimi’s tone: the Dallas-Arbiter Fuzz Face, the Roger Mayer Octavia (aka Octavio) and the Shin-ei Uni-Vibe. Yes, well counted, that’s only three – but as well as the original-style Fuzz Face, there’s a variant replicating the feistier sound of the red and white unit he used in the Band Of Gypsys era (1969-70).

This tiny footprint doesn’t allow room for a battery compartment but, unusually, a 9V adapter for mains power is included in the box with each pedal. In the case of our review samples that’s American mains power, unfortunately, but no doubt this will be rectified for UK sale stock.

Quite aside from the cult of Jimi, the Fuzz Face is one of the pillars holding up the temple of filth – a reference point for hundreds of fuzz pedals that have followed it. The only question is whether you prefer germanium or silicon flavour; and as Hendrix used both, it makes sense that in this case you can flip between the two. 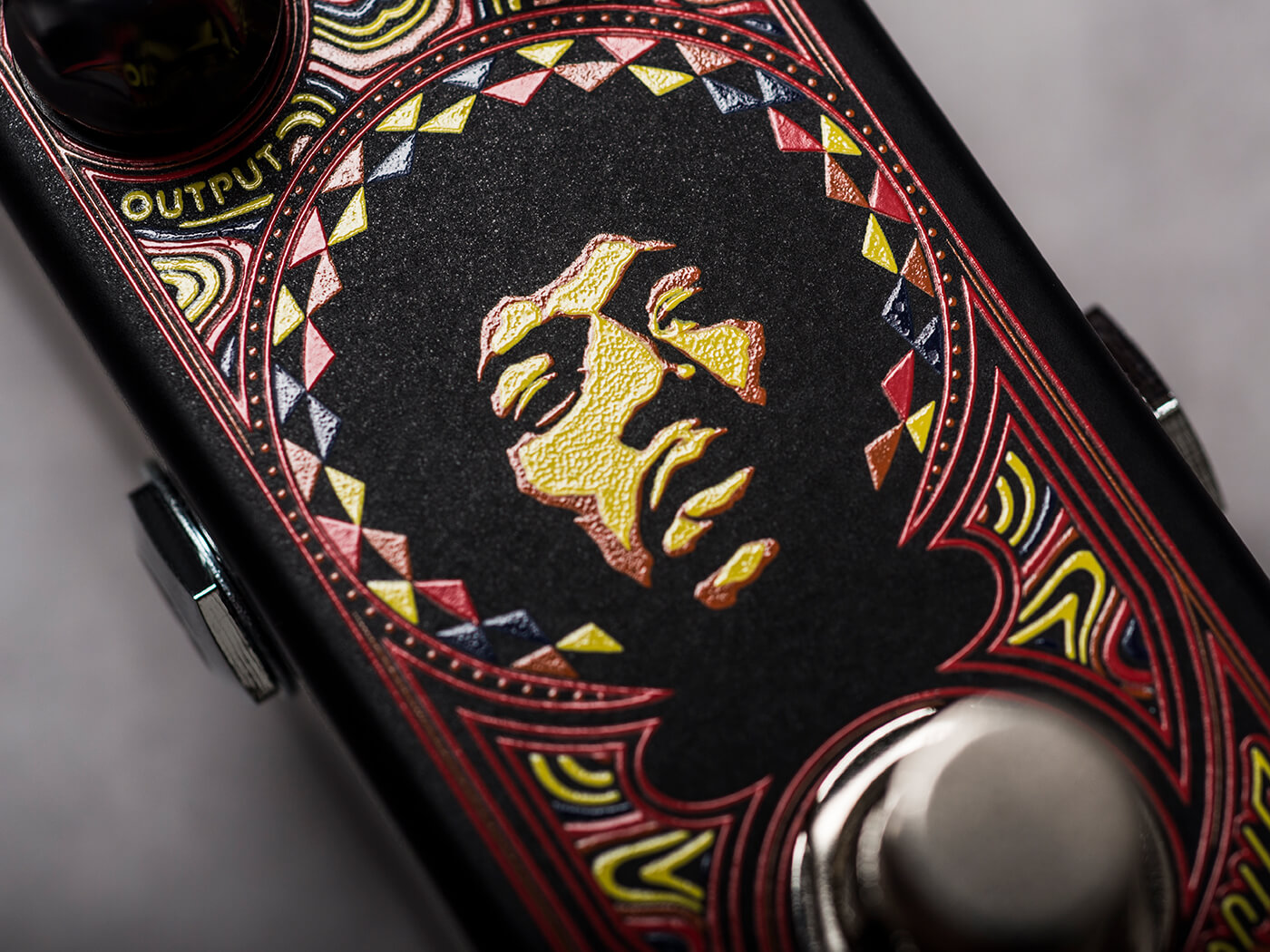 We suspect there won’t be much flipping going on here, though: the germanium fuzz wins out for silky smoothness, but its signal-to-noise ratio is so spectacularly low compared to the silicon transistors that it verges on the unusable. It’s lucky, then, that the silicon fuzz is more than sweet enough: deep and gurgly in the classic style, and only too happy to ease off into a fluffy-edged low-gain overdrive tone when you pull back the guitar’s volume a couple of notches.

Now, you know how fuzzes often don’t like having other pedals ahead of them in the signal chain? That’s certainly the case here – running the Uni-Vibe into this unit is a recipe for noise – but engaging the buffer does help with that to some degree. Conversely, if the Fuzz Face is first in line, switching the buffer off kills almost all the background hiss at the expense of just a little crispness. Conclusion: keep it first and don’t worry too much about the buffer.

Now we move to the Octavio Fuzz, and at the very mention of that name you’re probably thinking of Purple Haze. This silicon-based circuit is promised to be the same as it ever was (although the very first ones, according to Roger Mayer, were germanium), but we’re keen to find out how it differs from the Fuzz Face when the octave effect is turned off. 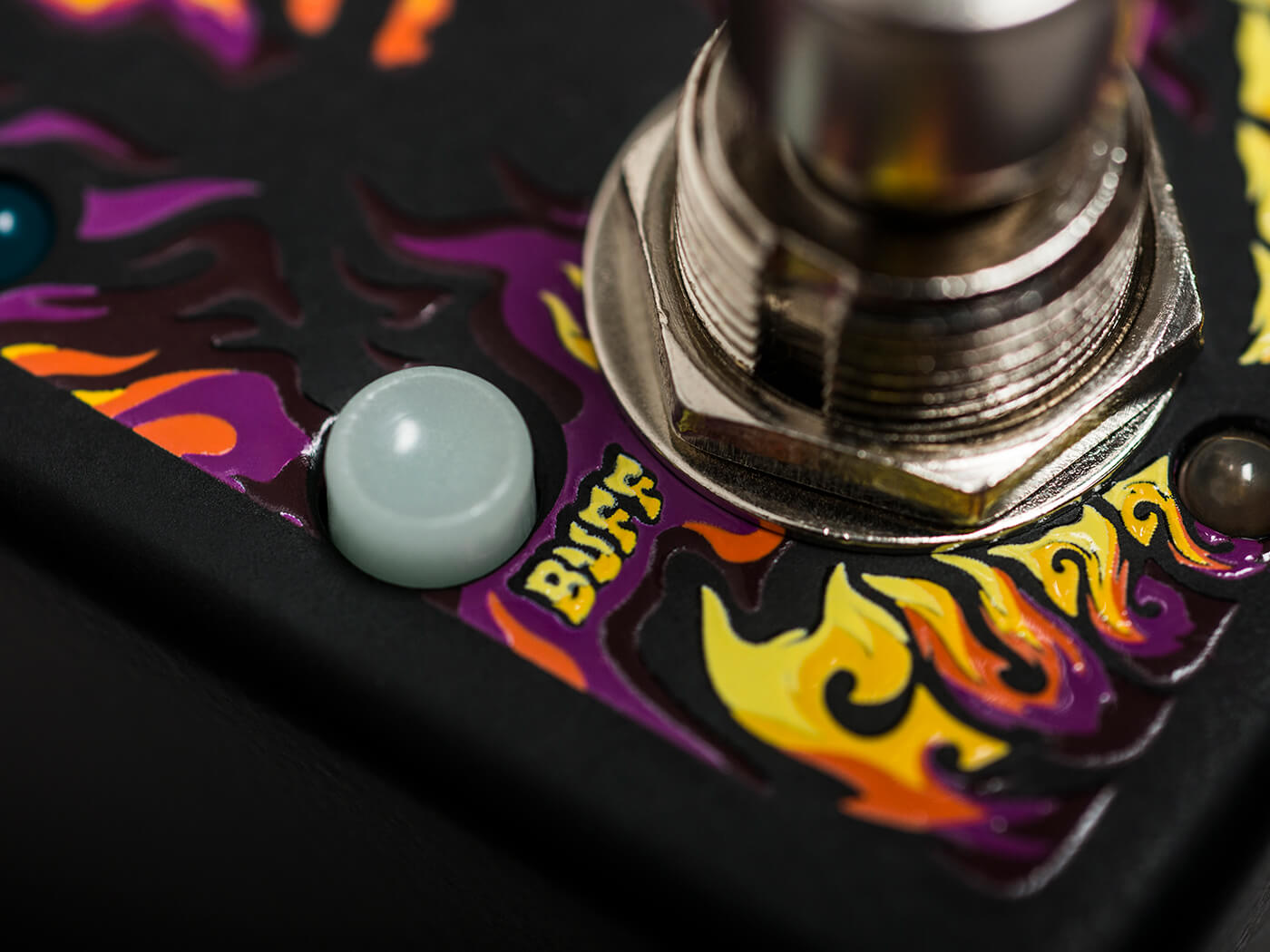 Well, we’re in the same muddy ballpark, but with a little more grind and less smoothness. This one’s happiest when the fuzz control is pushed close to full: the midrange takes a dip and instead we move into a boopy, synth-like tone that recalls a Big Muff Pi with the tone down low.

Then we pop the octave on and it really is instant Jimi. We’ve played modern pedals of this type with a stronger upper octave, and with the effect asserting itself lower down the fretboard, but the wiriness you get when those extra harmonics are only just cutting through is an evil delight in itself.

Dunlop’s historical boffins reckon the red Fuzz Face that Hendrix used in the last phase of his career was in fact a version of the Octavio circuit without the octave… so this Band Of Gypsys Fuzz should sound a lot like where we were a couple of paragraphs ago, right?
Hmm, sort of. The Muff-ish element is there alright, but we seem to have a bit more gain on our hands now. This is a rich and sticky fuzz that loves getting stuck into big power chords, and the tone control gives it some welcome extra flexibility for opening up the top end. It doesn’t clean up like the ‘real’ Fuzz Face, but as an all-round muck-spreader for 21st-century players this is probably the pick of the three. 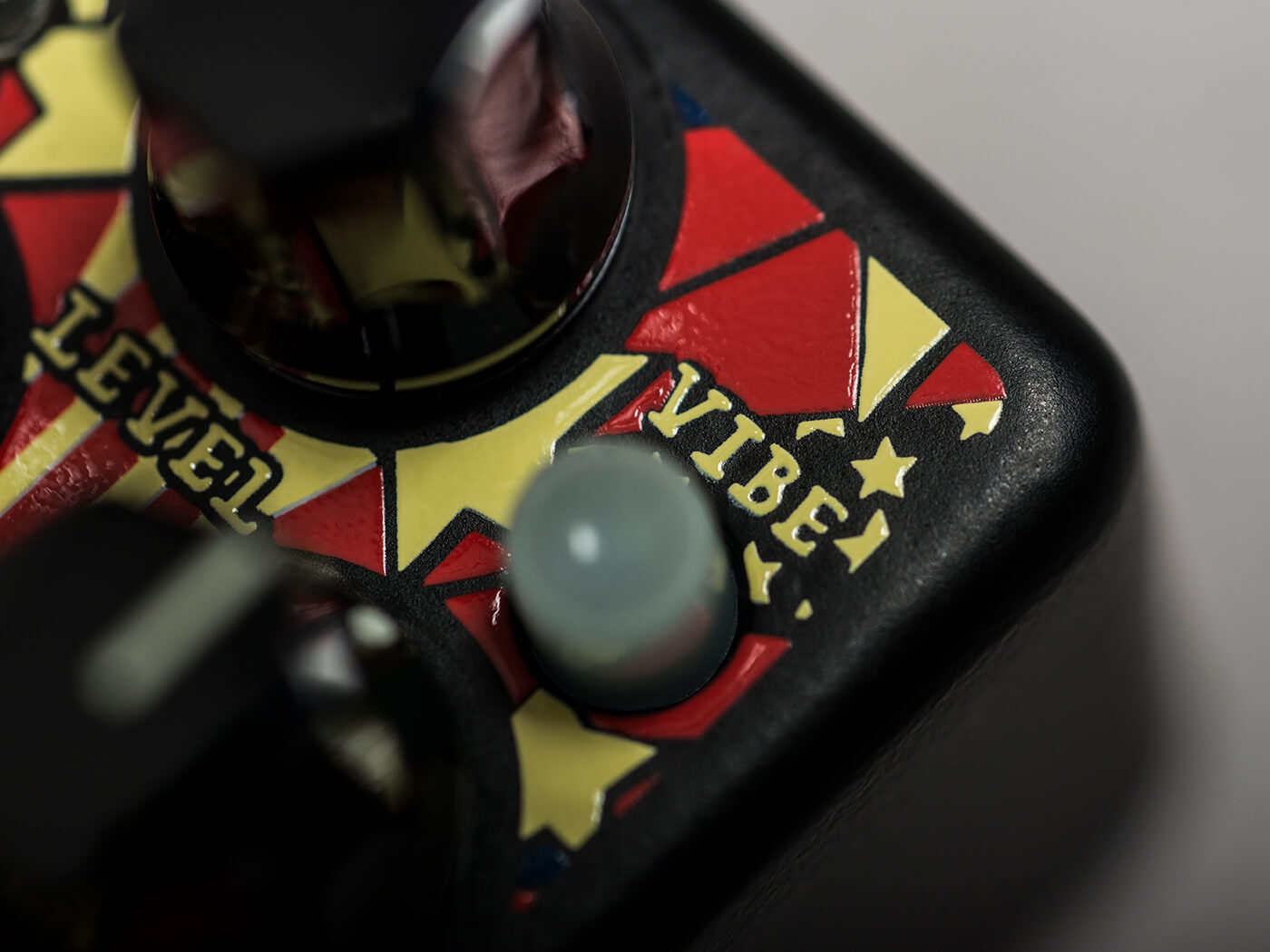 All of which brings us to the humble Uni-Vibe, which is low on pyrotechnics but high on wobbly wonderment. Like many of the countless other vibe pedals inspired by that original Shin-ei unit, it offers a choice between vibrato and chorus; in reality, both sounds take us to a deeply coloured zone of phasey modulation that lies somewhere between the two.

There’s an audible pitch fluctuation in vibrato mode that manages to stay the right side of wooziness, but it’s the so-called chorus effect that really hits the ‘grin’ button. This is the Uni-Vibe sound, no question: an insistently pulsing, not-quite-whining throb that sounds almost like a phaser but with a dash of Leslie and harmonic tremolo thrown in.

For best results, combine with the Band Of Gypsys Fuzz – plus a wah, ideally – then tune up your white Strat, adjust your bandana and prepare to scare half a million hippies all over again.