DOD’s take on a classic fuzz pedal blueprint offers some unique tone shaping options, but is it more than just another clone? 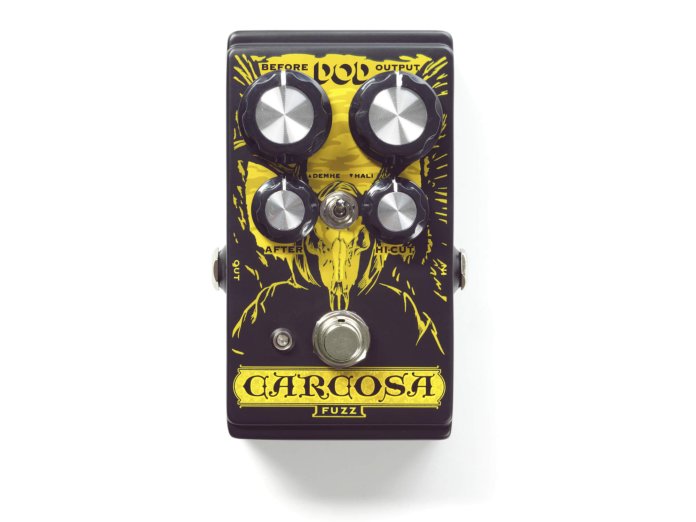 Following the takeover of DigiTech and DOD by Cort earlier in the year, and the mouth-watering idea that we’ll finally get some new products and reissues from these iconic brands, we decided to look at one of DOD’s dark horses that’s still currently available.

Coming in a moody black and yellow number and emblazoned with a hooded, skull-wearing figure that gives definite first season of True Detective vibes (though they assure us it’s purely coincidental, Rust Cohle fans), the doomy veneer of the DOD Carcosa Fuzz gives heavy suggestions on how it might sound. But this thing can do way more than just the noisy riffing beholden by his infernal majesty.

First of all, we need to talk about the controls. The fuzz police will note that it has a couple more than your average silicon transistor-based fuzz pedal, and that they’re not all labelled how you would expect. The larger of the two knobs are marked as Before and Output whilst the smaller are titled After and Hi-Cut. Nestled in between these is a toggle switch with the intriguingly arcane-sounding options of Demhe and Hali, so what does it all mean?

Diving into the manual we can see that Before is in fact just a control for the amount of fuzz. After is a bias control that changes the texture of the fuzz. The aforementioned toggle switch turns out to be a clever little addition that changes how the pedal behaves depending on how you’re running it. Select Demhe if you’re going into a clean guitar amp and you’ll get a bass and low mid boost to help compensate sonically. If you prefer a dirty foundation tone, then Hali cuts the bass of the pedal, ensuring it doesn’t result in that dreaded woolly ‘woof’ that comes from overpowering the low end. 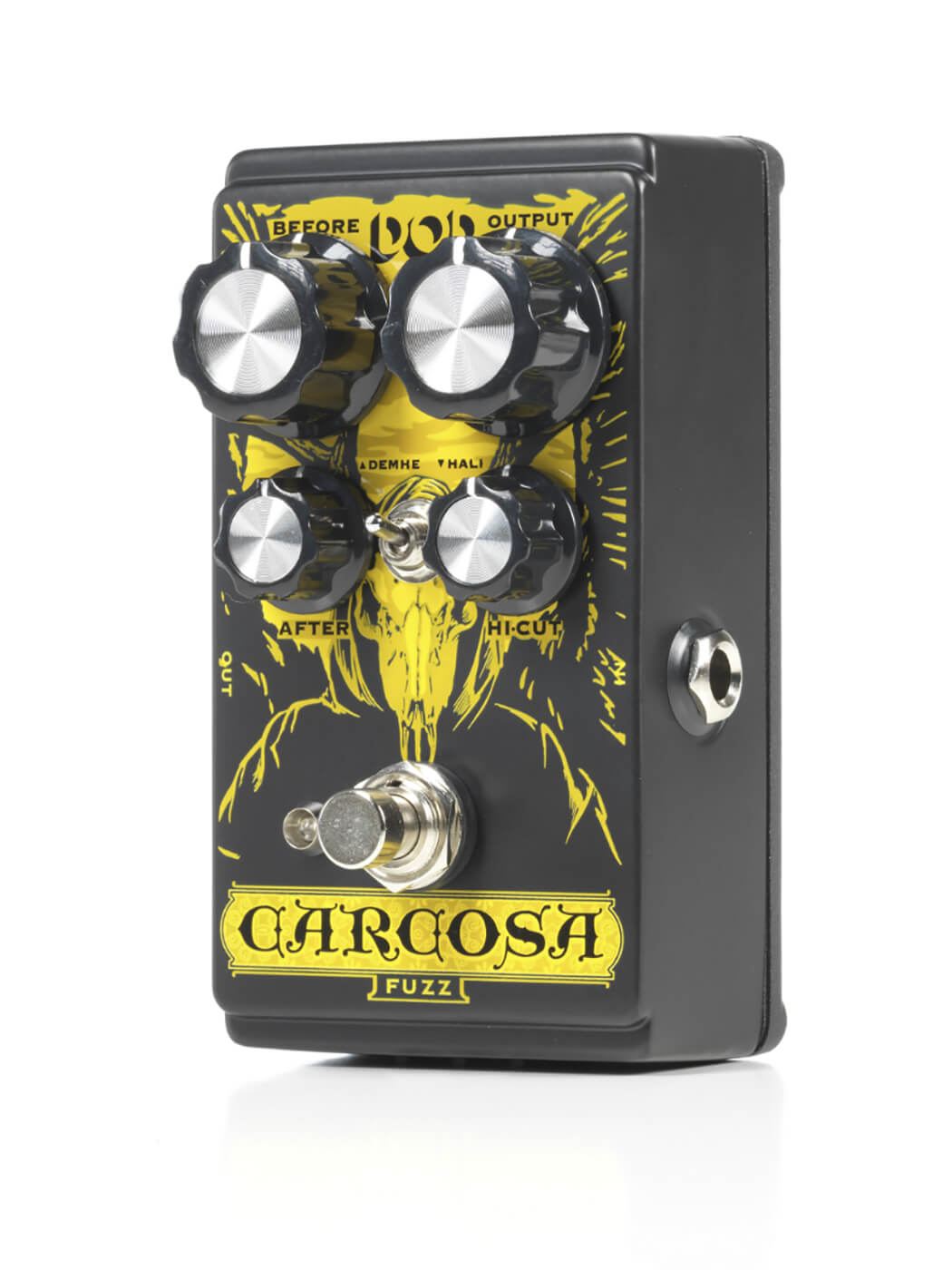 The core of the DOD Carcosa Fuzz sound lies in the interaction between the Before and After knobs. It’s how you get from a light dusting of fuzz to all out sonic destruction. To start we switched the toggle to Demhe and paired it with our single-coil equipped Tele, a Fender clean amp base tone, and our go-to blues and hard rock licks.

In the lower registers of the Before and After controls, you can find a warm and thick fuzz tone that reacts well to volume knob manipulation; sounding well defined, even with complex chords. At mid levels expect anything from Jack White’s brand of blues right through to Matt Bellamy-inspired fast and fluid riffing.

The interplay between the two controls gives you a dizzying amount of tonal options, so much so that we find it difficult to stop trying different combinations, and that’s before we even get to our two additional knobs toggle-switch setting.

The Output control works as you’d expect, however, there is a considerable amount of volume on tap to the point that you can knock the other controls to zero and use it as a boost, driving the front of your amp. Adding a little of the After control back in gives the Carcosa an overdrive-like quality, opening up an additional tone option should you need it.

Meanwhile, the Hi-Cut control is designed to allow sculpting for different pickup types. Set it further to the left for single coils and take out some of the treble bite, or more to the right to brighten up those darker humbuckers. When paired with the latter you definitely need it too, as the Carcosa has a tendency to get very bass heavy at higher settings. 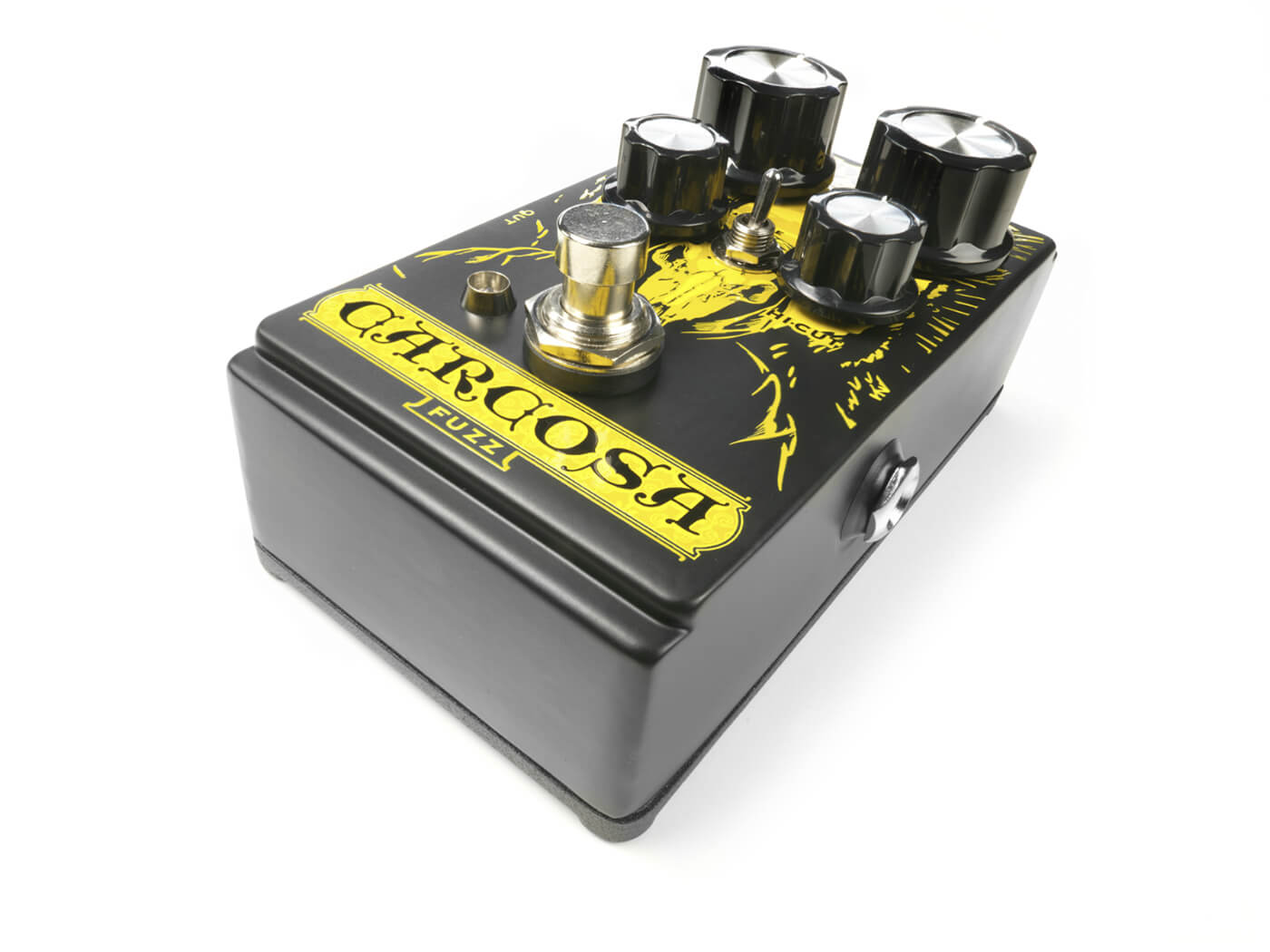 Switching the toggle to Hali and swapping out our clean amp for the dirt channel of an Orange-combo and a humbucker-loaded Les Paul, we get straight into stoner and doom territory. It’s a sound that begs for drop-tuning and a tempo of playing that proceeds at a crawl; gnashing and rasping in a way that makes you pull a face in the best kind of way.

Crank the controls to the max and you get a broken, unpredictable fuzz sound that noise fiends will adore, as if you’re calling up the malevolent entity for which the pedal gets its unique artwork.

Despite the ominous styling, this is one of the more versatile fuzz pedals we’ve come across and it will reward those players that take the time to see past its unhallowed exterior and cabalistic control scheme. Much like the short story it owes its name to, the DOD Carcosa Fuzz is at first confusing, only to reveal hidden depths upon closer examination.