A recreation of a vintage classic released in celebration of Electro-Harmonix’s 50th anniversary. 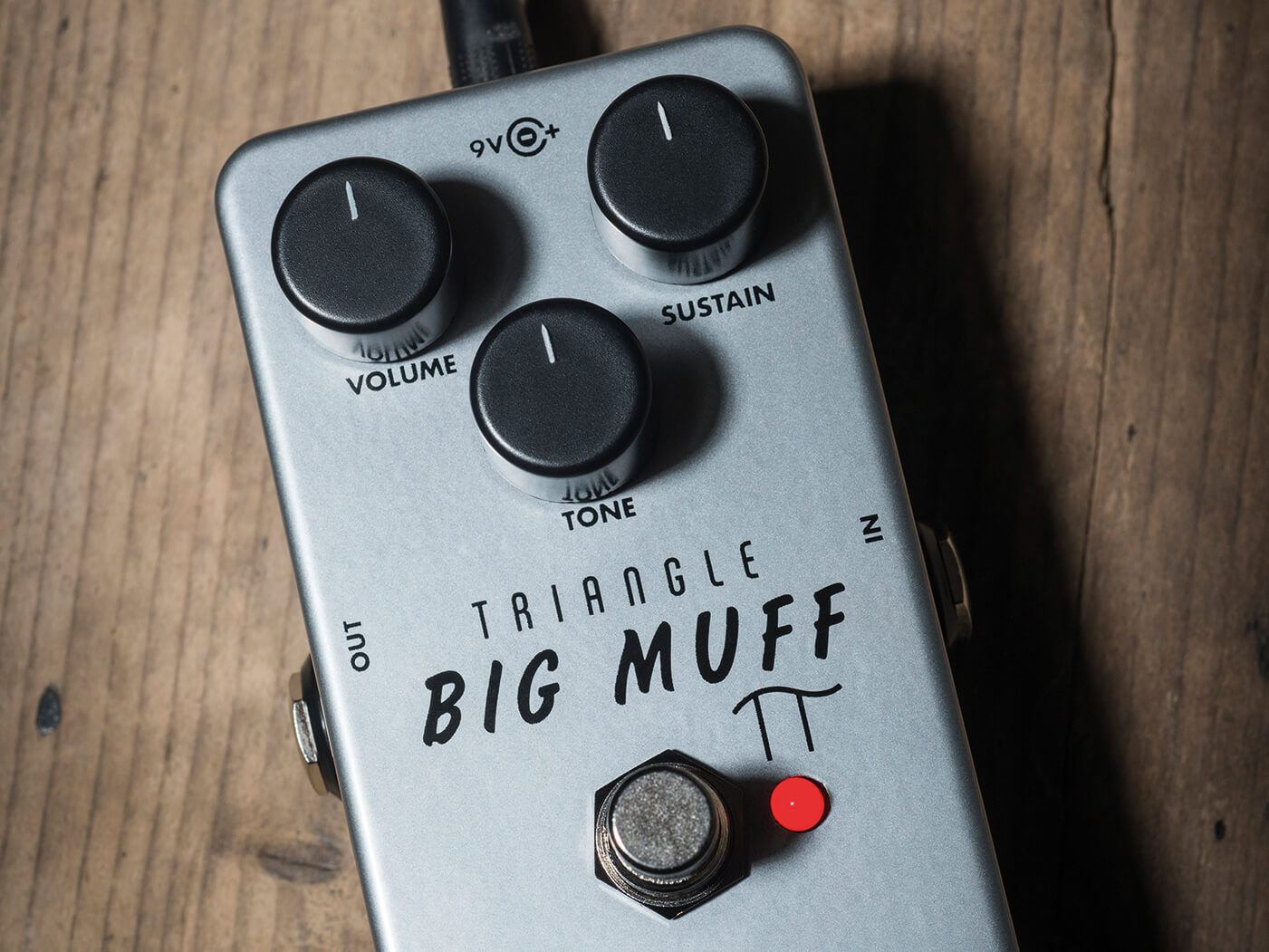 + The one vintage Muff fans have been waiting for

⊖ It will turn your extended chord voicings to mush. Just like the original!

We’ve waited years for EHX to add to its selection of Nano-format Big Muffs, and then all of a sudden three have turned up in very quick succession. We checked out the Green Russian and the Op-Amp (designed in conjunction with Billy Corgan) previously, and now we have this – a faithful recreation of the pedal that started it all, the venerable Triangle Big Muff Pi, named after the positioning of the three control knobs on the original design.

Originally released in 1969 as a logical progression from the existing Muff Fuzz, the Big Muff has become legendary for its ability to produce cello-like sustain for lead sounds, huge bass response for powerchord work and all manner of chaos and aggression for the more experimental player. The Big Muff tends to work best in partnership with an amp with a bit of midrange to show it to its full advantage and for this review, a hand-wired Vox AC4 was pressed into service. 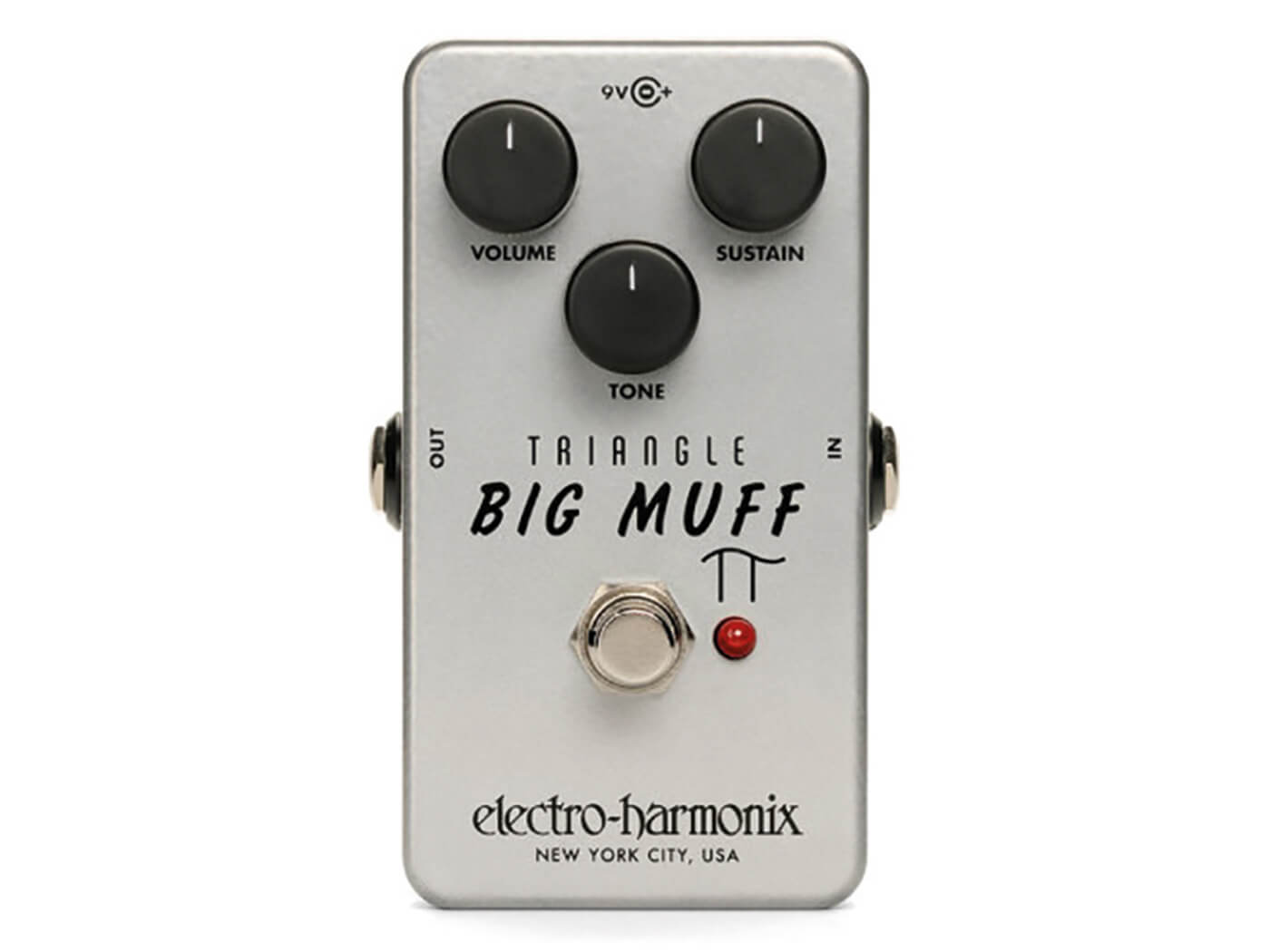 With the amp grumbling on the edge and a P-90-loaded SG in hand we set all three knobs on the Triangle Muff to 12 o’clock and hit the switch. An open E chord immediately summons up that familiar Big Muff roar with (as expected) most of the chord itself disappearing into a low-string powerchord. Such is the nature of the beast – indeed, anyone looking to hear every note in their major 7th and minor 9th chords may be shopping in the wrong department.

This is, however, a classic Big Muff sound. A very good one, too. With more of a vintage feel than the Green Russian and Op-Amp offerings, this pedal covers some very pleasing classic-rock bases, from Python Lee Jackson top-fret histrionics to mid-period Mick Ronson-isms and, with the sustain dialled down a little and the tone up, it also does a convincing Samba Pa Ti. With the front pickup selected and the tone rolled off, we have a very vocal lead tone which, while it would require a boost to get it through a band mix on stage, is particularly addictive.

Perhaps the most noteworthy proponent of vintage Big Muff tones is, of course, David Gilmour. And you’ll be relieved to hear that the Triangle Big Muff Pi proves itself to be very much at home in a psychedelic-rock scenario. Indeed with the addition of some vintage-sounding delay, reverb and flange it becomes pretty otherworldly, with soaring high bends and growling bass notes.

It is perhaps in this context that the Triangle Big Muff Pi will find most favour. With myriad boutique pedal companies flooding Instagram with the promise of authentic vintage Muff tones at prices on a par with original vintage units, it is extremely encouraging to see Electro-Harmonix reminding the world of what it does best: characterful, musical and inspiring stompboxes at price-points that allow everyone to get a slice. Happy birthday EHX, and thanks for all the fuzz.