We put the treadle to the metal with Ernie Ball’s expressive takes on overdrive, tremolo/reverb and delay as the Californian company expands its hands-free stompbox effects offering… 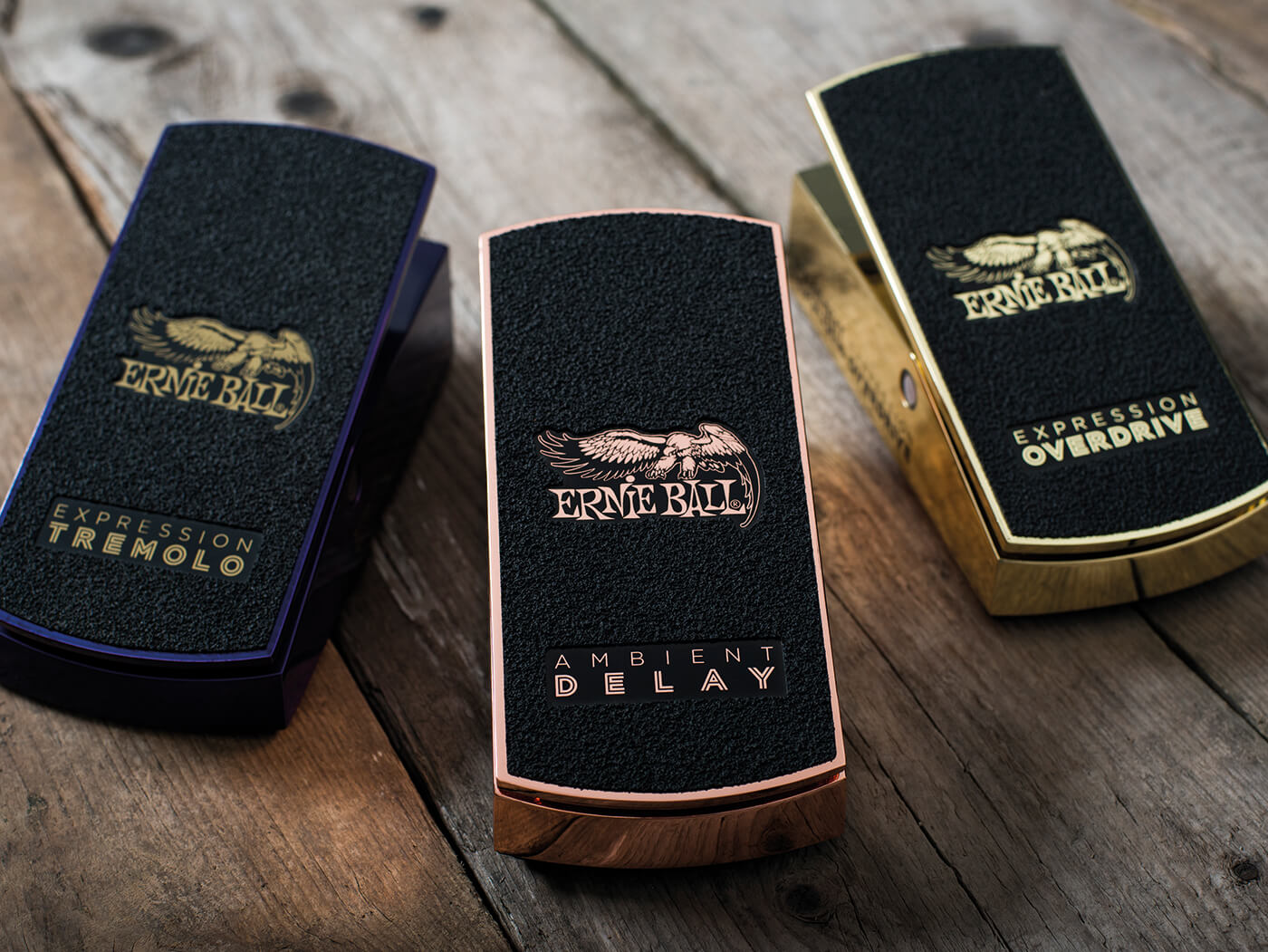 Although it might not be the first brand that you associate with stompbox effects, Ernie Ball recently celebrated four swell decades in the quiet/loud/louder business and introduced a 40th Anniversary edition of its much-loved and best-selling volume pedal. Alongside that limited-edition unit are three new EB pedals intended to give a level of control over your effects that’s impossible to achieve when using more traditional latching switches.

Each unit features a treadle that allows you to alter various effect parameters in real time and, in conjunction with a brace of controls loaded onto the front face, you can go from subtle to full-on without letting go of your strings.

Probably the most complex of the three units we have on test is the Expression Tremolo. Alongside controls for setting the depth and rate of the effect and a reverb-level pot, there’s a waveform selector that gives a choice of a quintet of tremolo voicings. The Overdrive offers drive, tone and boost knobs, while the Ambient Delay has pots for setting the time (which ranges from 50ms to one second), feedback, and reverb level, plus an additional input for a remote tap-tempo switch. There’s also an internal trimpot for setting the maximum wet output level.

All three are housed in a sturdy aluminium chassis and are fitted with an ‘unbreakable’ Kevlar cord that links the treadle to the pedal’s internals via a short spring. What’s more, each is clad in eye-catching metallic finishes that’ll certainly jazz up your pedalboard. There’s no battery option, simply an input for a nine-volt DC supply. Although we struggled to find any guidance regarding the current requirements aside from a small notation on the Expression Tremolo, we used a supply that produces a maximum of 300mA and it worked fine – just ensure you have a suitable PSU at your disposal before taking the plunge.

Straight off the bat, the Expression Tremolo is far and away the most tonally versatile pedal of the trio. The Harmonic waveform is a highlight – its Uni-Vibe-style phasey throbs benefit hugely from being manipulated in real time. What’s more, the depth and rate pots are push-push, which lets you quickly set their values to maximum when the pedal is in the toe-down position for some genuinely unusual tones.

The Square setting gives a great selection of staccato chops, while at the other end of the scale, subtly altering the rate either of the two Slow waveforms adds genuine emotion to picked chords. The reverb obviously adds atmosphere and sweetness, and its range, from barely perceptible to cathedral levels, is nicely judged.

Used as a standalone echo, the Ambient Delay has lots to offer, with its 50s-style slapback being especially worthy of mention. Add in a little of the spanky room-like reverb and dig out your Gretsch – surf and rockabilly styles sound great, while fading longer delays in and out at will is both fun and effective. That said, we did experience some extraneous noise, and the effect is still slightly audible with the treadle in the full heel-down ‘dry’ position, especially when using amp drive.

The Expression Overdrive is best used to add its own gritty character to an already driving amp and if you set the boost to full and the drive to zero, it delivers a volume hike for solos, too. Having instant control over the amount of gain is a potentially very useful feature and it can take you from a subtle blues to a classic-rock roar in one downward press of the pedal. The dry tone remains apparent alongside the effected sound, so the result is akin to running one clean and one dirty amp simultaneously.

There’s no doubt that all three units are well made and have an alluring look. The layout of the pedals does make on-the-fly adjustments of the pots tricky, with the crowded control panels of the Tremolo and Delay leaving little room for questing fingers. The Tremolo’s purple pots can get lost on their dark background, too, especially on a poorly lit stage, but we’re confident that its stellar performance will dispel any gripes. The appeal of the other two units may be more selective, but we’d encourage you to give them a spin.