These green machines are not called ‘Tube Screamers’, but they are built by the company behind the Ibanez originals. We compare two new Maxons to a vintage TS9… 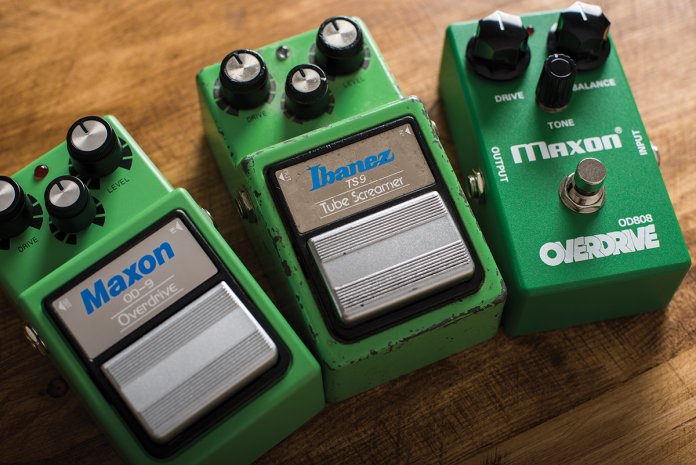 The original Tube Screamer was part of a range of pedals Maxon built for Ibanez between 1974 and 2002, establishing Ibanez as a stompbox brand. When the TS808 arrived in 1979, relatively few pedals sought to emulate the sound of cranked up valve amps.

Amps had become increasingly powerful and many were designed to run clean. Getting a good overdrive sound with enough sustain for soloing was by no means straightforward. Many a guitarist’s heart must have sunk when arriving at a venue to discover a rented Twin Reverb or something solid-state. Carrying a Tube Screamer to gigs ensured they could dial in a usable tone with pretty much any amplifier.

The Susumu Tamura-designed Tube Screamer is the most copied stompbox of all and a name that’s synonymous with any op-amp based overdrive that employs clipping diodes in a negative feedback loop. That said, the term ‘Tube Screamer clone’ is often applied indiscriminately and inaccurately. For most players, the Tube Screamer is closely associated with Stevie Ray Vaughan and he used most versions of it. But special affection is reserved for the first two – the TS808 and the TS9 – and here we’re reviewing Maxon’s latest take on both models.

Ibanez still markets Tube Screamers of its own, although they’re no longer made by Maxon. Externally, the Maxon OD-9 is a dead ringer for the Ibanez TS9, but the OD808 has more generic cosmetics.

Both originals had buffers on the input and output that remained in the signal path whether the pedal was on or off. This ensured silent switching and drove long cables properly, but most of modern ‘clones’ omit the buffers and feature true bypass switching. This is also a popular mod for original units.

The Tube Screamer’s emitter follower output buffer is the area of greatest interest because of the two components that follow it in the circuit – a series resistor and a shunt resistor. The values for the classic TS808 are 100R and 10K, and for the TS9 they are 470R and 100K. This is the only difference between the TS9 and the more collectable TS808.

While the Maxon OD-9 is true bypass, the input and output buffers are retained. So it has a vintage-correct circuit, but the buffers are only in the signal path when the pedal is switched on.


The OD808 has the traditional buffers, however Maxon has deviated from the 808 formula by changing the two output resistors to reduce noise levels. The result is that the new values make the OD808 electronically identical to an original TS9, rather than a TS808.
Advertisement

The other area of interest is the op-amp. Pedal geeks can get pretty fussy about chips and the original JRC4558 has acquired a certain mystique. Here, the TS808 packs a JRC4558, whereas the TS9 has an NJM4558D. Don’t panic, however – NJM is simply the name of the company formerly known as JRC, aka The Japanese Radio Corporation.

In Use
We pit the Maxons against a much-loved early 1980s Ibanez TS9, with the pedals placed in true bypass loops to prevent the buffers from muddying the waters, running from the same power supply and into the same amp. Compared to the original TS9, the OD-9 generates higher output and a tad more gain. It’s also noticeably sweeter and less fizzy for overdrive and the overall sound has a refinement that actually gives it a slight edge on the oldie. 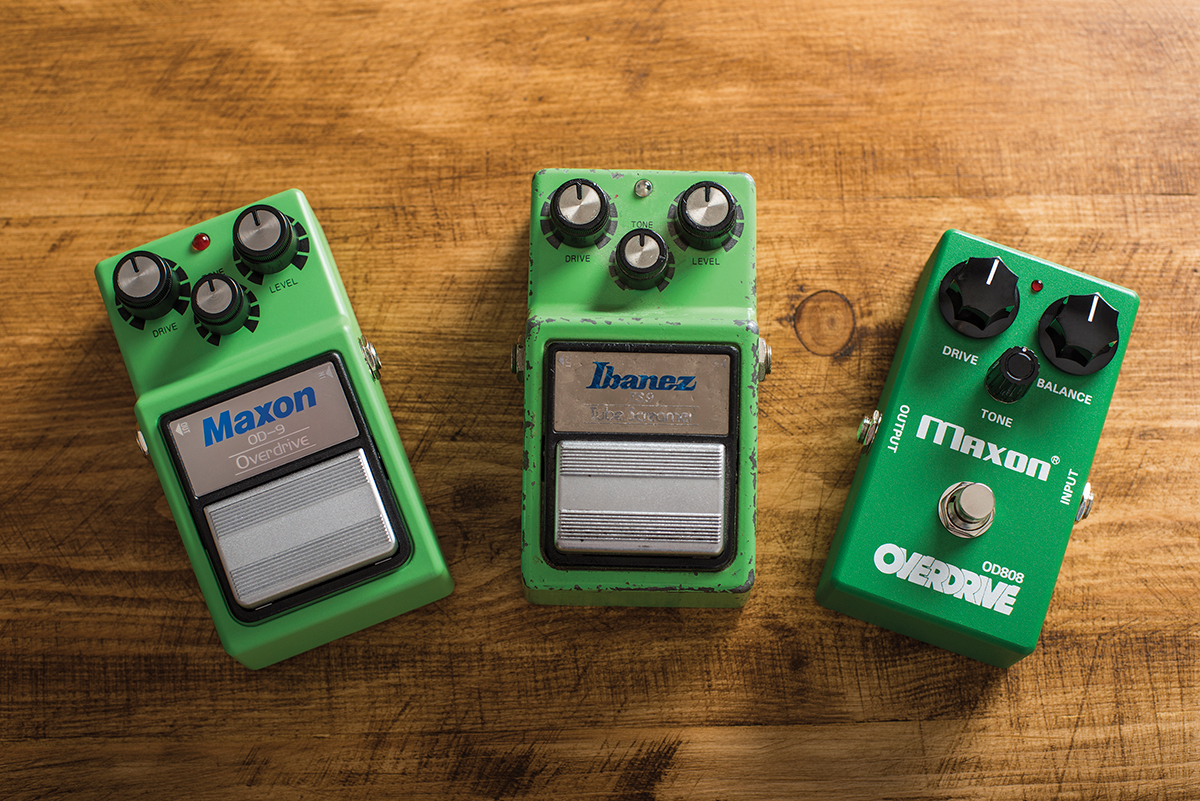 The OD808 is much closer to the old TS9 and by matching control settings they can sound virtually identical. There’s the honk in the low mids, a slightly murky darkness and the noticeable bass roll off.

With both Maxons, as you turn up the tone control, you get that familiar sound of it getting brighter but not necessarily clearer. Compression increases along with the drive, and above a certain point, the increase in compression is more noticeable than any increase in overdrive.

When used with an overdriven amp, dialling back the gain and raising the output level reminds us that the TS is one of the sweetest boosts in the business.

The Maxons provide articulate definition, ample sustain and they’re both extremely fine implementations of the Tube Screamer circuit with the quirks and charms of the originals. So what does that mean in a practical context? The prevailing climate of the late 1970s should be considered when discussing the supposed shortcomings of original and reissue Tube Screamers – namely the bass and treble roll off, midrange hump, compression and lack of true bypass.

People also criticize the lack of transparency, but there are more ‘transparent’ overdrives out there. With that in mind, we should appreciate the Tube Screamers for what they are, not what the aren’t. 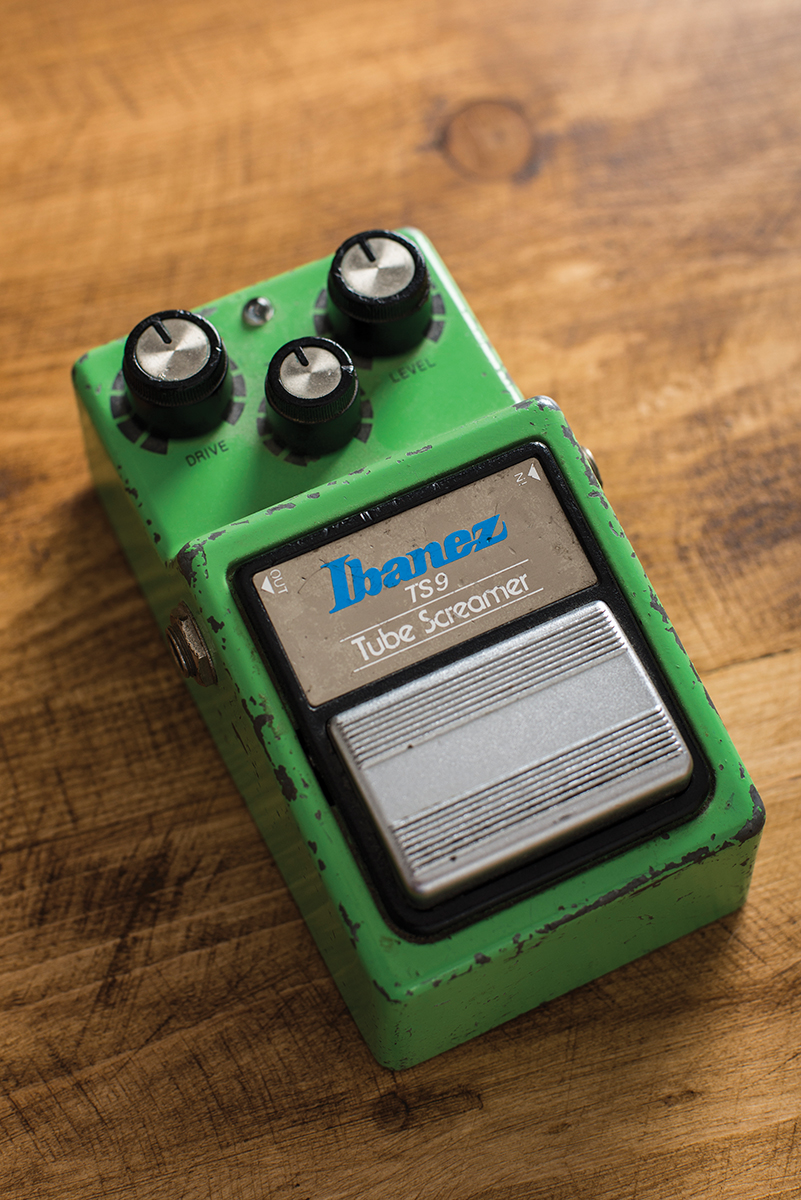 Also remember that most three-band tone circuits scoop the mids by default, so the mid hump does a fine job of filling out the sound. Since bigger amps have beefed up power supplies, they’re often stiff and spiky. The Tube Screamer’s compressed tone can make these amps feel a lot more player-friendly. You might even say that they provide many of the things that mid-sized tweed amps do by default.

Having played a Tube Screamer for over 20 years, this reviewer felt right at home with both of these Maxon pedals. It’s horses for courses. If you want dead on classic tone, and can live without the classic looks, the OD808 is the one for you.

If you like the idea of a clearer and more refined take on this classic overdrive, with the potential added benefit of true bypass switching, go for the OD-9. Maybe it’s time to retire that valuable vintage Ibanez TS9… 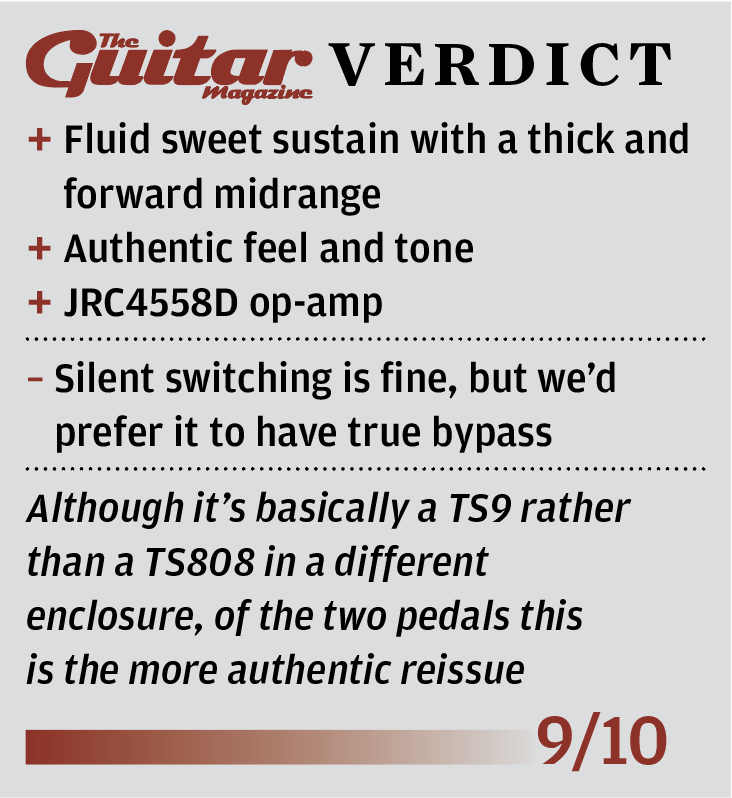 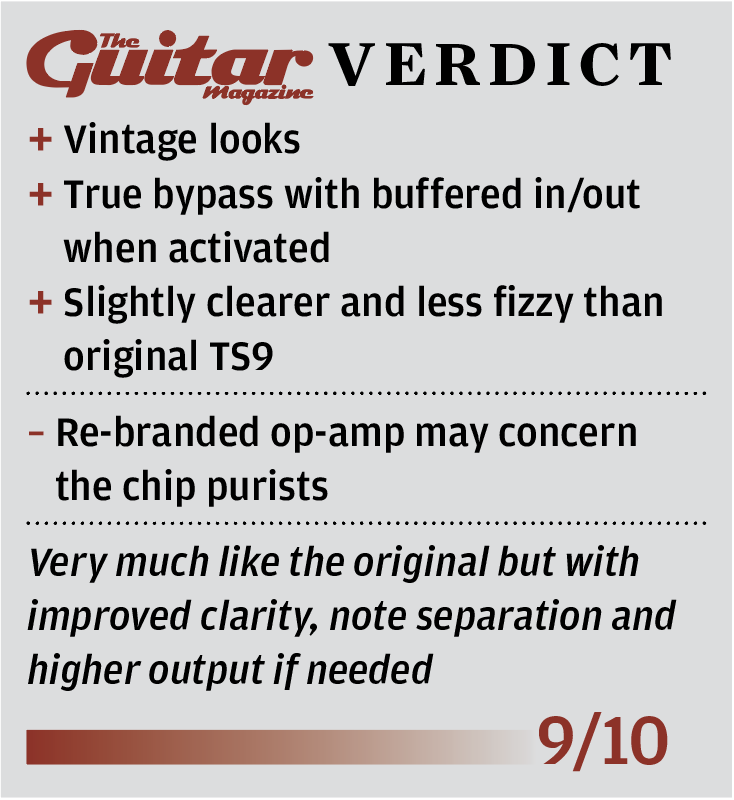