Can these Oklahoma-built pedals live up to the promise of their out-there brand name and even more out-there product manuals?

If you’re standing in the ocean, body in the water, feet in the sand, are you a peninsula? No, probably not. You’re just a human. Er, come again?

Don’t worry, we haven’t just taken a turn for the metaphysical – that’s the opening paragraph of the user guide for the Old Blood Noise Endeavors Dweller. There seem to be a lot of indie pedal makers vying to out-freak each other with psychedelic names, artwork and the like these days, but this Oklahoma company might just have leapt to the top of the pile.

Most important, of course, is what’s going on inside. OBNE makes a fairly wide range of stompboxes covering all the usual categories, but the overriding theme is individualism and/or weirdness. Thus the Alpha Haunt is a flexible fuzz with an unconventional approach to EQ, while the Dweller is a ‘phase repeater’ that combines delay and modulation in fruity new ways.

Both units are solidly built, with metal enclosures and matching plastic knobs straight out of an 80s OEM catalogue, but our Alpha Haunt arrives having suffered one minor catastrophe in transit: a rattling from inside the box turns out not to be a free plectrum, but an IC chip that’s come away from its socket on the PCB. It’s easily pushed back in, and behaves itself subsequently, so let’s put that down as a shipping-related one-off.

Controls-wise, this is one fiddly filth-maker. The distortion is adjusted via fuzz and volume dials plus a high/low gain switch; but there’s also an ‘enhance’ control for dialling in a cleaner (but not clean!) signal, and this needs balancing with the master volume for overall level. Then we come to gate and bias, which work to let you play with squishy and spluttery effects or keep things open and flowing.

Finally, there’s the EQ section on the right. It’s pretty obvious what the three big sliders do, but you also have the option of engaging a low-pass filter to block out the really jaggedy stuff. This has two modes for different cut-off frequencies, plus a knob for adjusting how ruthlessly the filter is applied.

Though it’s a smaller pedal, the Dweller is hardly less complicated. The key control is ‘stretch’: keep this one at zero and you have a pure modulation pedal, or turn it up to drift into various flavours of delay. The two toggle switches are also easy enough to explain: ‘shape’ changes the modulation waveform (sine, triangle, or stepped with randomised frequencies), and ‘voice’ flips between four-stage and eight-stage phasing. But beyond that… oh, let’s just start playing and see what happens. 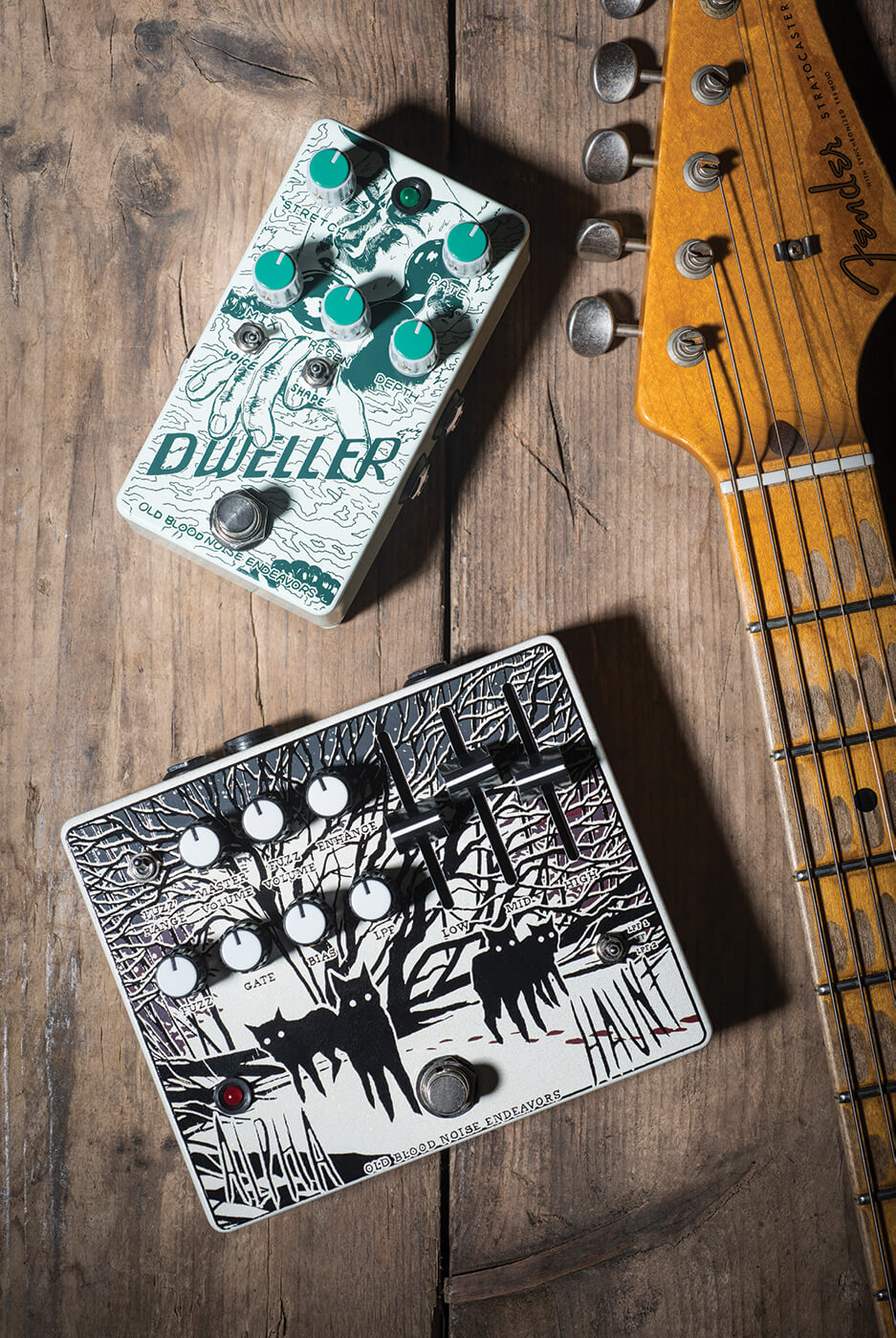 We turn to the Alpha Haunt first, because who wouldn’t want to play with cuddly wolves? Okay, they’re probably not supposed to be cuddly, but once we get our levels balanced up this thing is no more scary than a basket of puppies. The fuzz is exactly how it should be: full and smooth, and running all the way from a gentle ‘furring up’ effect to a totally immersive cloud of rich, honeyish noise.

Leaving the LPF off for now, the EQ sliders allow precise tailoring of treble and bass content, while the mids can be scooped right out or pushed into the sort of honkiness that would cut through the mix in a brass band. Judicious use of the ‘enhance’ control can fill out the lower frequencies, but what you don’t get is an unmusical mix of competing fuzzy and clean voices – it’s a more subtle textural thing than that. When we do flip on the filter, it’s striking how much snarling treble and upper-mids content is snuffed out – but that’s not to say it sounds muffled. In fact, once you get used to these two more soft-edged voices, you might well want to stick with them.

And that brings us to the gate and bias controls – which are arguably the best thing about the Alpha Haunt. There’s fun to be had by tweaking with restraint, but try slamming gate round to full and bias down to zero. This squashes your headroom into the floor and slams the gate up and down on every note like a possessed guillotine. It’s the most satisfying and playable version of the ‘splat fuzz’ sound we’ve heard in years.

The best way to approach the Dweller, unless you enjoy feeling disorientated, is to try out the four sample settings in that philosophical manual. They’re all really cool sounds, and so different it’s hard to believe they’re all coming from the same stompbox – which makes them a good starting point for your own explorations into the swirling depths.

Three of the four are primarily delays – one straight but building, one with densely rhythmic tripping patterns, one coming across almost like a modulated tremolo – while the other is a robotically flangey version of a random sample-and-hold filter. Flip the shape switch to the left on this last one, while turning down the regen and depth controls, and you’ll get something more like a straight phase, flange or vibe effect – but from there on, the controls are so interdependent that you’re really on your own.

There are some non-extreme sounds in here if you dig deep enough, and the only real challenge is finding the same one twice. On the other hand, if you have an expression pedal you can take things even further out to sea by shifting the stretch control – from modulation into lengthening delay and back again – as you play. This sounds so wild and glitchy you might end up taking a turn for the metaphysical yourself. Are you a peninsula? Who knows any more? 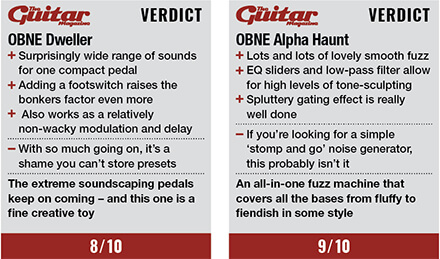