The porky pedal maker expands its line-up in three very different directions. But will these diverse pedals – a preamp, a ring modulator and a compressor – bring home the bacon for Pigtronix? 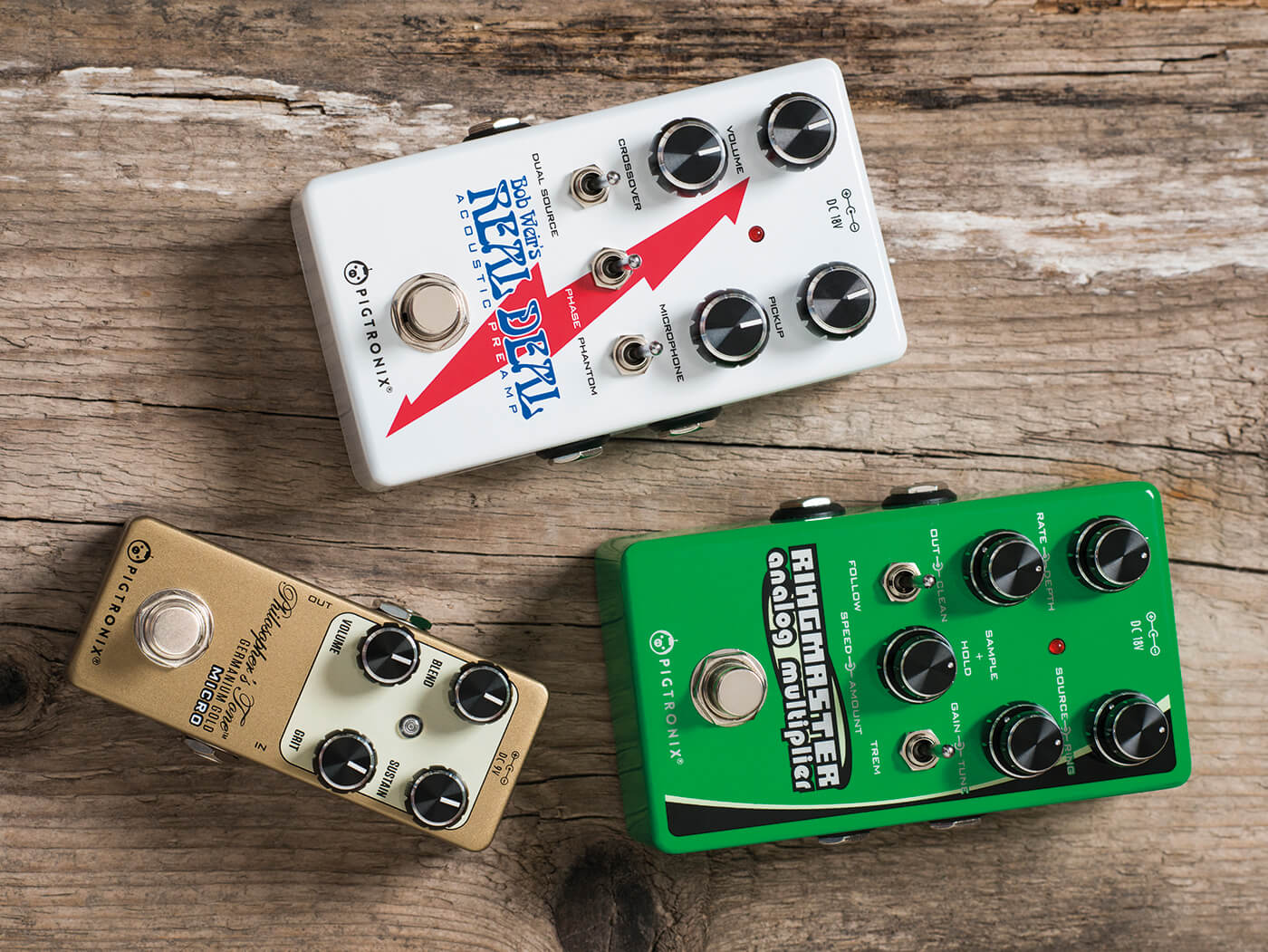 Once there were three little pigs.

Well, two medium-sized pigs and one teeny tiny piglet. But they didn’t build a house together, because they had so little in common it never would have worked. Just look at them: an acoustic preamp for gigging troubadours, a zany analogue ring modulator for sonic renegades and a tasteful compressor for vintage-minded tonehounds. If there’s a guitarist alive who wants all three of those on the same pedalboard, we’ll be amazed.

Full marks to Pigtronix for keeping things diverse, then. We’re also intrigued by the distinctively bulging control knobs on its latest generation of stompboxes, which are going all out to pack in maximum functionality per square inch. And six years after moving over to US production, Pigtronix is now building pedals in China again, which may help keep UK pricing stable.

So, let’s have a brief introduction to the three units before we get stuck in. 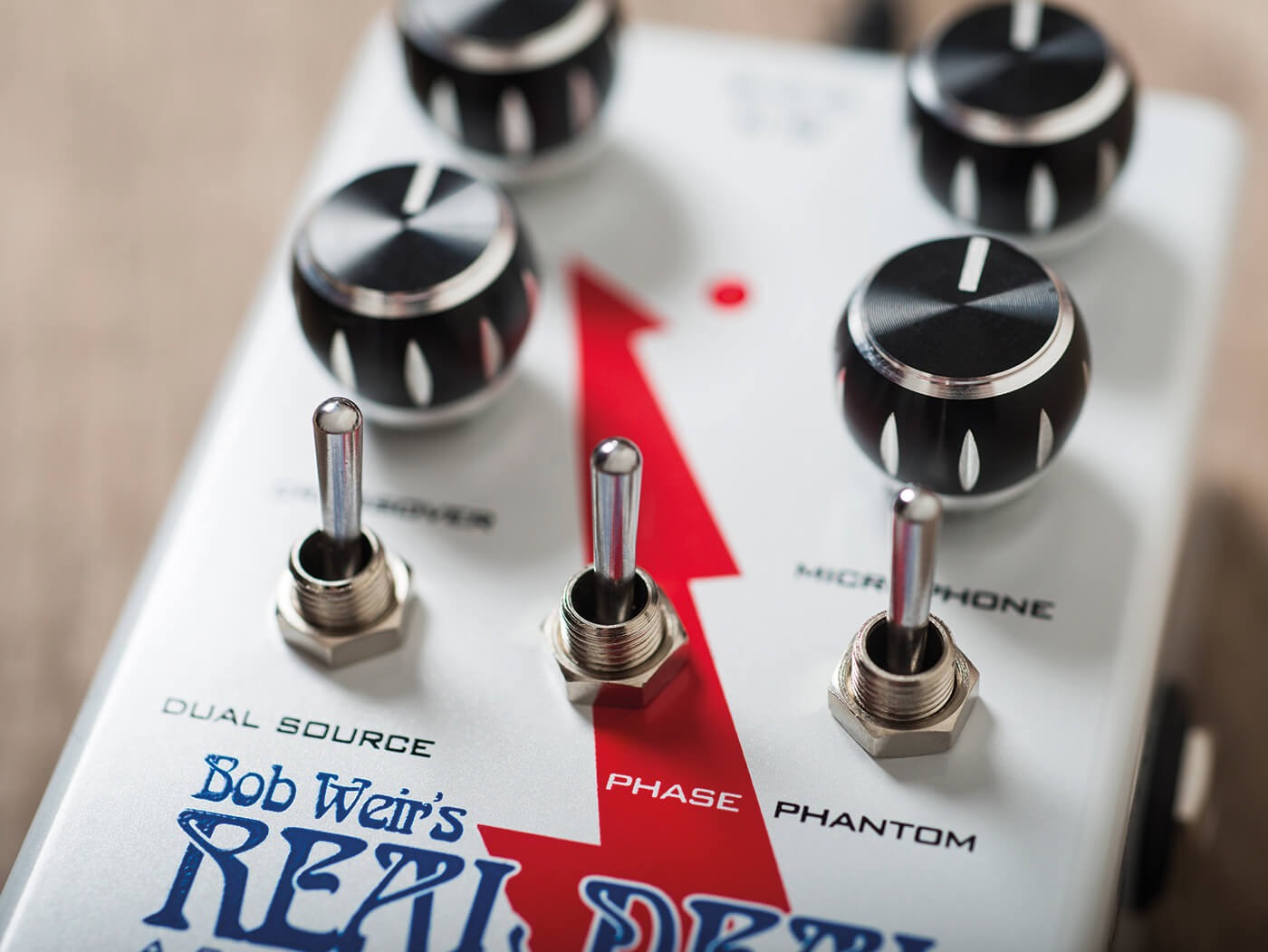 Developed in cahoots with Grateful Dead founder member Bob Weir and his tech Mike McGinn, the Real Deal is a live preamp for acoustic guitar that uses analogue filters to create separate high and low frequency bands, then blends them back together at an adjustable crossover point. You can put one source through both filters, or for best results, send a piezo pickup through one and a microphone through the other. The mic input is a jack rather than an XLR, but it is wired for balanced cables, and has switchable phantom power.

Next, the ring modulator. For the uninitiated, this effect uses deliberately unmusical intervals to create clanging, jarring atonality… so maybe skip this paragraph if your next gig’s with a 50s coverband. But the Ringmaster does offer more control than most over just how freaky things get, thanks to five pairs of concentric knobs plus two toggle switches and the option of plugging in a secondary sound source to generate modulation frequencies. 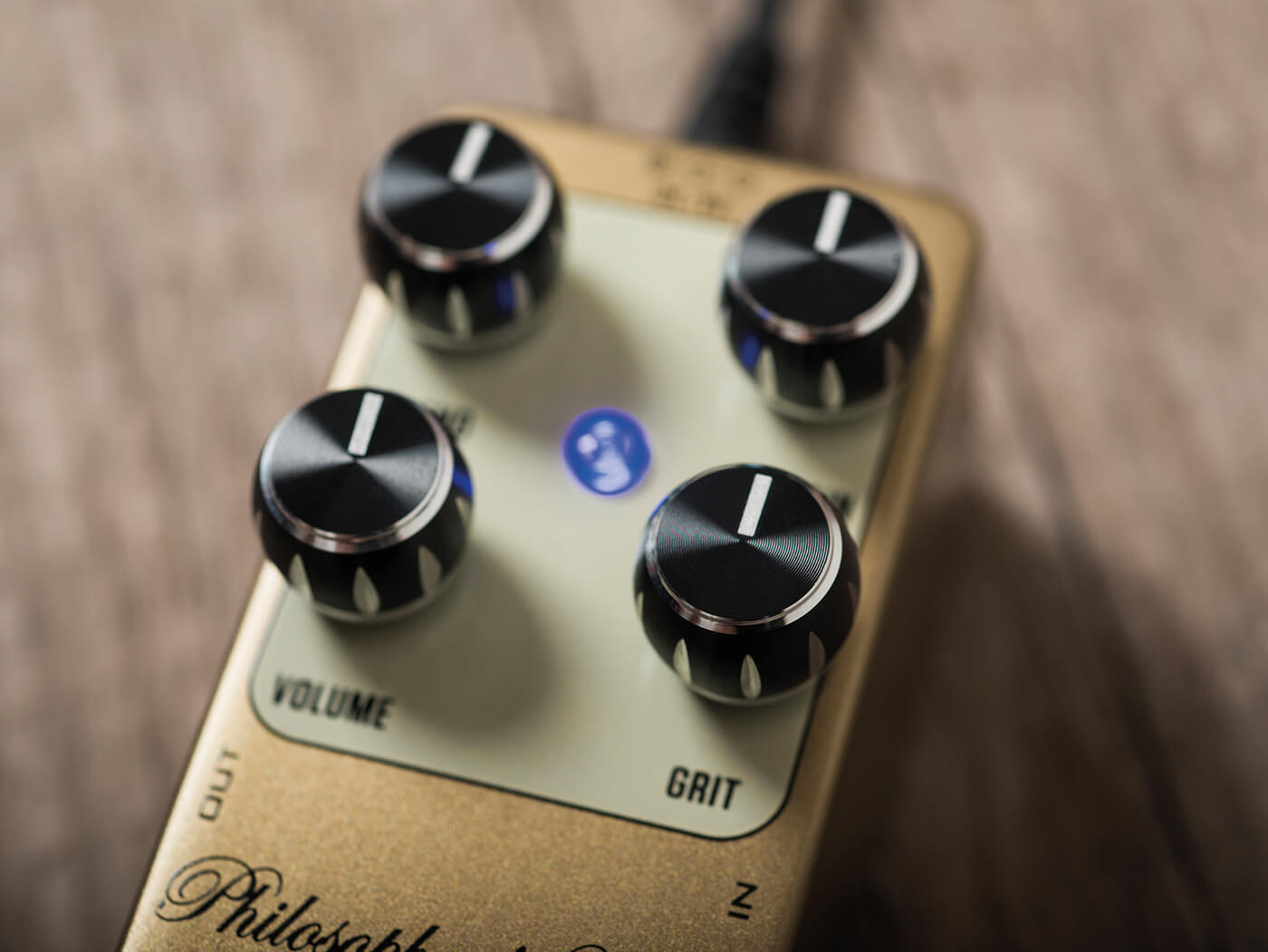 And that just leaves the piggy with the smallest box, but the biggest name: the Philosopher’s Tone Germanium Gold Micro – it’s a wonder the company managed to fit all that on the front. The original Germanium Gold was a limited-edition take on Pigtronix’s acclaimed Philosopher’s Tone compressor with added germanium clipping diodes, and this is basically a miniaturised version of that. It’s awfully cute, and unlike its two big brothers, it runs on a standard nine-volt power supply.

If you find the piezo output from your electro-acoustic too bright and plasticky, but don’t want to put all your faith in a microphone, the Real Deal is an ingenious and effective way to make sure your guitar actually sounds like your guitar.

The pickup channel’s low-pass filter softens the top end, while the mic channel’s high-pass kills all the thumps and rumbles; and ‘crossover’ shapes the zone where they overlap, simultaneously sweeping both filters’ cutoff points between 300Hz and 3kHz. How good each channel sounds is of course dependent on what goes into it, but the tone-shaping capability on offer here is deceptively deep, and a lot of that is down to the power of the crossover control.

This offers everything from reedy clarity to various flavours of ‘clonky’ thickness; and while the phase switch is there to prevent frequency cancellation, it can actually be used creatively to scoop out more midrange content. This is an easy pedal to fine-tune, and it adds virtually no background noise.

Life isn’t quite so simple with the Ringmaster: plugging straight in for an exploratory twiddle, it becomes clear after five minutes of chaotic noisemongery that we’re going to need directions. Luckily, the manual includes a step-by-step ‘guided tour’ for first-time users. So we begin with pure ring modulation, which sounds suitably alien, and we’re then shown how to ‘tune’ it to the input signal.

Next, we’re invited to explore the rate and depth controls of the low-frequency oscillator, which is essentially an exaggerated vibrato effect. Then it’s time for some randomised fun with sample-and-hold filtering, before we start playing around with gain, wave shapes and pitch-tracking. Finally, we get to try the almost-not-weird-at-all tremolo mode… and by now we’re ready to start mixing things up to create new sonic textures. 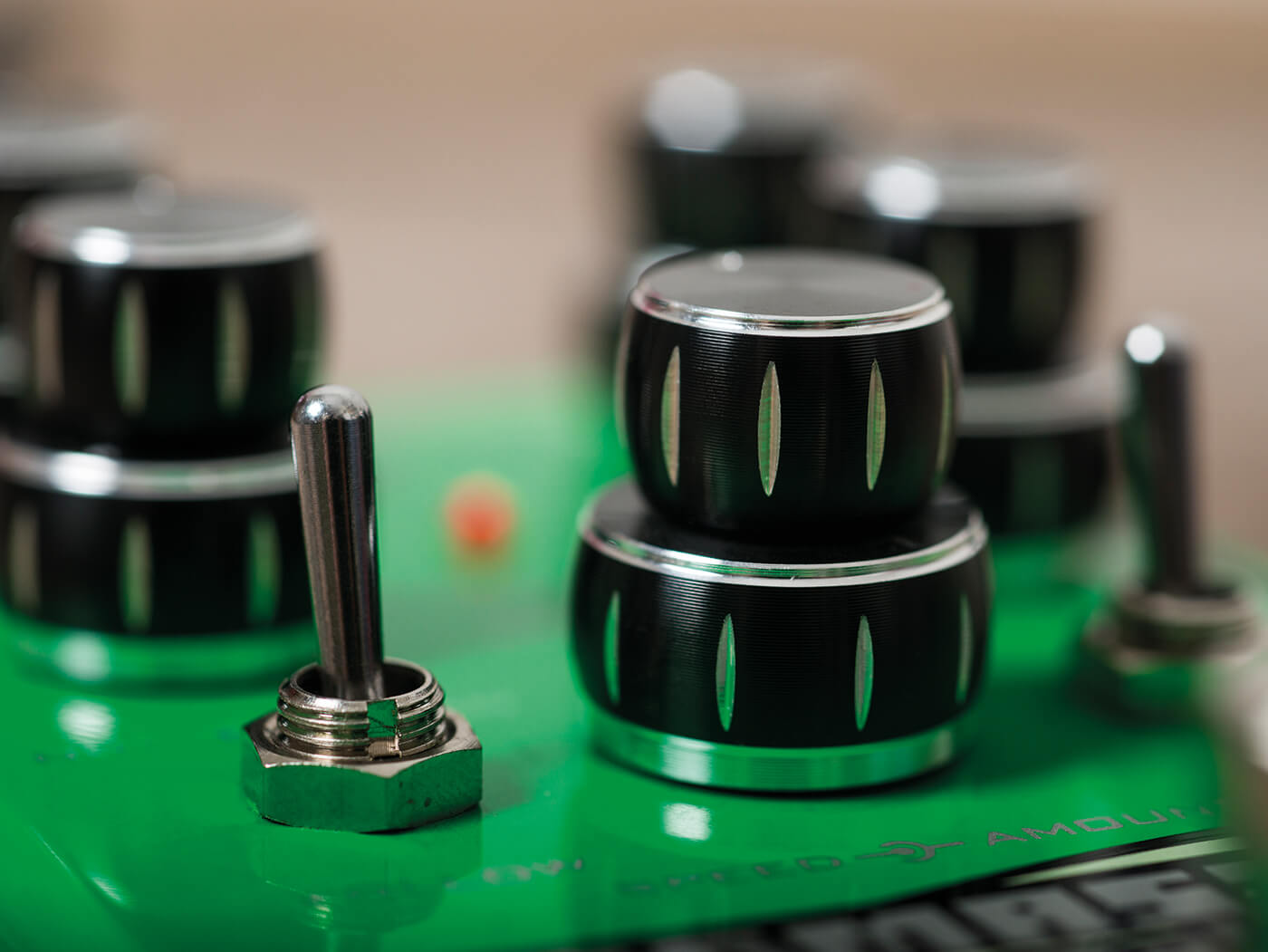 That’s the theory, anyway; in practice, using the Ringmaster can feel like a constant battle to get away from the harsh stuff and find something more musically inspiring – a struggle not made any easier by the tiny dot markers on the outer controls, which are virtually impossible to see unless you’ve got the pedal gaffer-taped to your face. This is a clever unit with some nifty tricks in its locker, but it will require a little patience to get the most out of it.

And so we come to our last little piggy, the Philosopher’s Tone Germanium Gold Micro… and it’s the pick of the litter. This isn’t a miraculously transparent compressor: there’s a distinct softening of the mids, but that only serves to accentuate low-end warmth and trebly shimmer in a way that’s as rewarding as a cuddle from a six-foot spaniel. There’s no nasty popping, but plenty of country snap, and this is a pedal that might just make you fall right out of love with your uncompressed sound. Yes, that sound you were really happy with five minutes ago…

Now to dial in some of that germanium grit. You can’t control the gain here, only how high it sits in the mix and at times, the overdriven sound can feel slightly ‘tacked on’ to the clean signal. But you’re now dealing with two blend controls – dry/compressed and clean/driven – and a twist of either one of them will usually cure that problem. The distortion itself is grainy and fluffy in classic germanium drive/fuzz style, and quite entertaining even without a cheeky sustain boost from the compressor.

Aside from being excellent at the compression side of things, if you need an emergency filth-box, this little pig might just save your bacon. 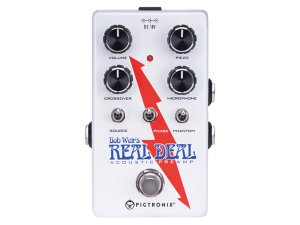 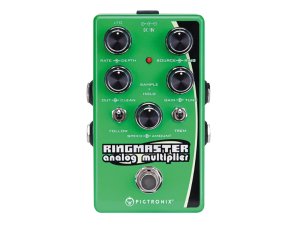 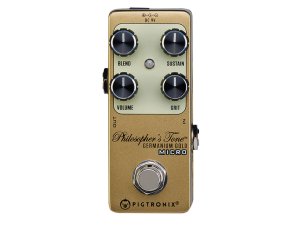