Perhaps the most hyped pedal of 2019 – but there’s more to this Instagram darling than meets the eye. 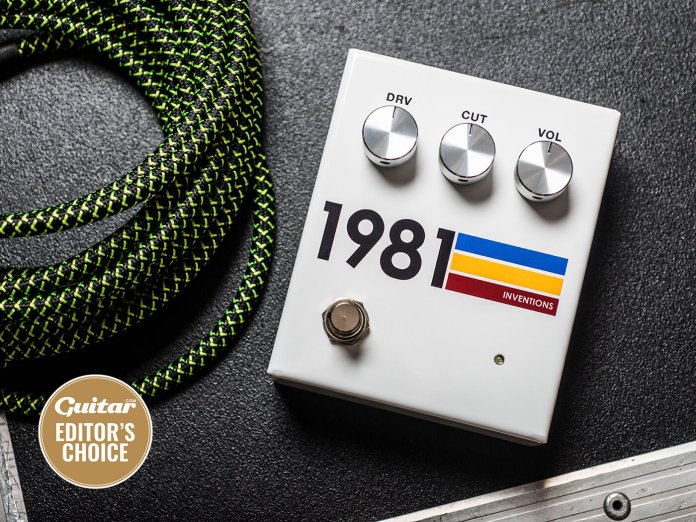 It’s a tale as old as time, a tone-obsessed guitarist – frustrated by the capabilities and quality of existing units on the market – begins a quest for new horizons of sonic excellence.

1981 Inventions’ Matthew Hoopes was one such guitarist and after four years of intensive R&D, working with his close friend Jon Ashley of Bondi Effects, he launched the first run of 1981 Inventions DRV overdrive pedals late one night in 2018. By morning they had all sold.

The fact that the pedal is still only available direct from 1981 Inventions only adds to the mystique, with very few units available for review.

We have to begin by addressing the DRV’s aesthetics. There’s no getting around it, it’s a gorgeous looking box in vaporwave, blacked out, pink, solid silver or any other of the myriad colourways offered in small-batch drops by 1981 Inventions. In this instance we have the original design on white in all its negative-space, Bauhaus glory. There are three control knobs (labelled DVR, CUT and VOL) plus an on/off footswitch and corresponding LED. Simple stuff.

The initial jumping off point for the DRV was a 1985 Whiteface ProCo RAT with the inclusion of a fixed level preamp and around 1/20th the amount of gain to be found in a traditional RAT circuit. The low end, midrange, filter sweep, level, switching system and LED have all been carefully revised to create a pedal that aims to bring new levels of overdrive quality and nuance to your sound. 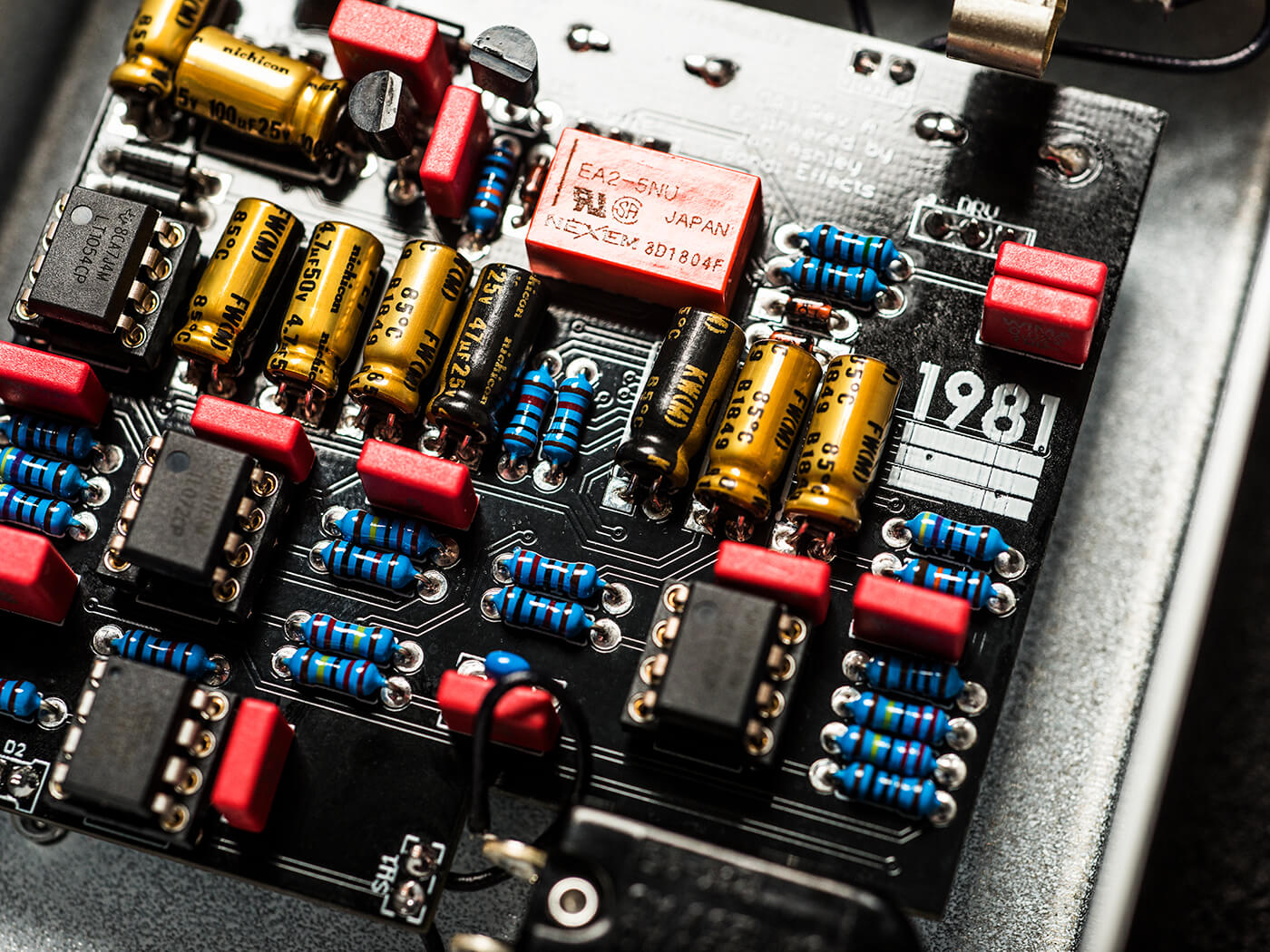 Plugging straight into an early Cornford amp with a Tele and everything set straight up, we are rewarded with an instant and frankly superb helping of rich, musical overdrive reminiscent of an original Crowther Hotcake, but with a more elegant voice across the low-mids and bass. There’s an almost amp-like response across all pickup settings with picking dynamics and complex chord voicings coming through untrammelled.

It’s a touch spiky on the bridge at first, but the cut control is exceptionally powerful, offering a wide spectrum of usable tones from Vox-like chime at the top end to a solid grunt as you cut the trebles. Particularly inspiring is the way the controls interact with one another, the volume and drive offer a large amount of tweakability from an extremely pleasing clean boost to a throaty overdriven roar that never disappears into mush. 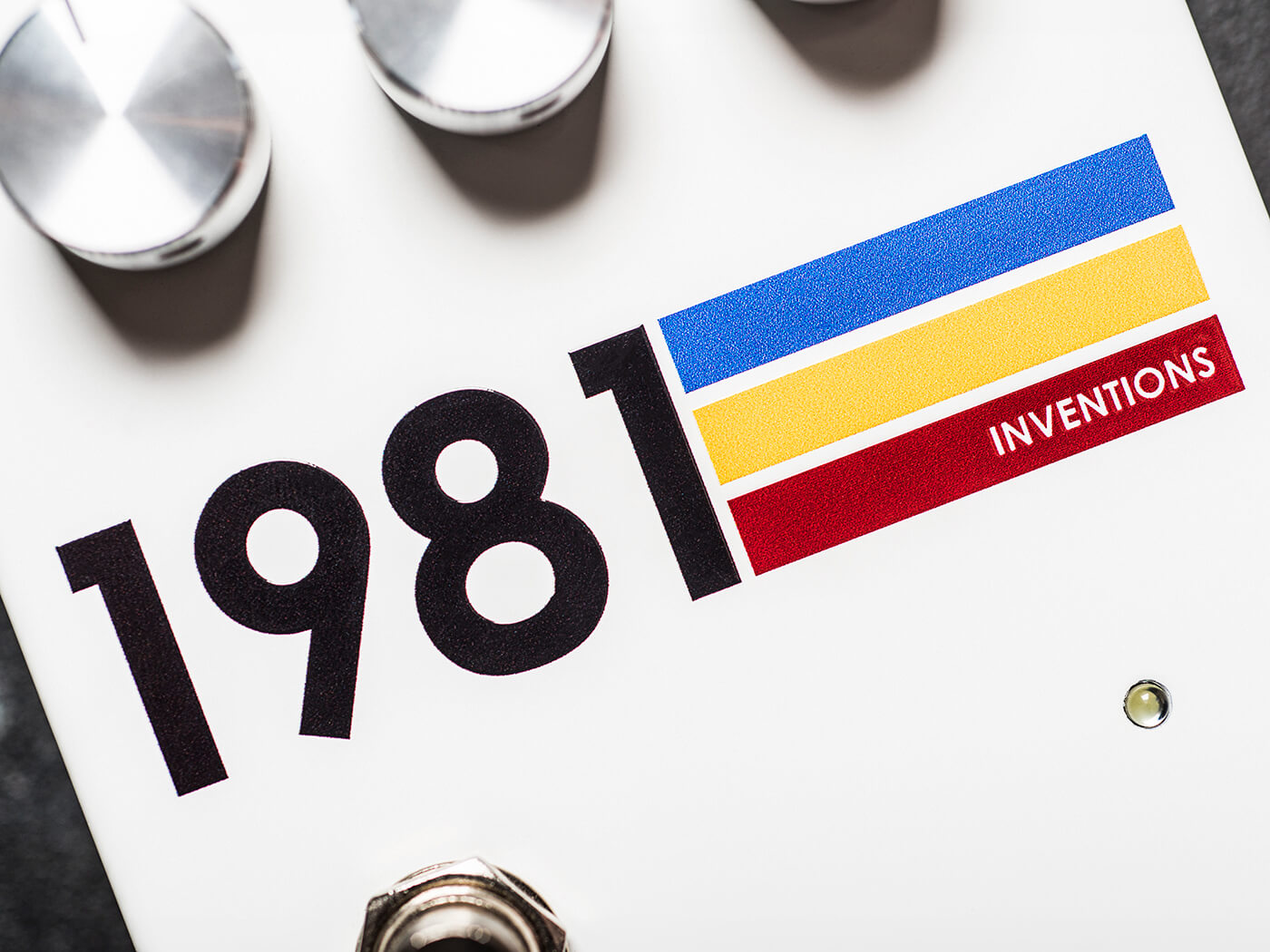 Moving across to PAFs on an SG, we discover another layer of pupil-dilating belligerence with the bridge pickup especially loving life with a newfound intensity. The response is immediate, and the decay of each note is consistently musical and organic. In fact, no matter what we plug into it, the DRV retains the character of the guitar and the quality of the overdrive in equal measure. Particularly impressive is the way the pedal works across musical genres with very little need for adjustment.

It takes an exceptional sounding pedal to stand out in today’s extremely crowded and noisy marketplace. In the 1981 Inventions DRV, Matthew Hoopes and Jon Ashley have created exactly that.