The insect-loving Californians’ latest luxury fuzz pedal, with added harmonies and synth-like modulation, threatens to be its noisiest creation yet.

In our recent review of the Beetronics Overhive and Buzzter, we concluded that both pedals were great, but expressed a preference for this US maker’s wilder, fuzzier creations. So how about a box that, by Beetronics’ own description, “sounds like a thousand killer bees coming to get you”? Should be extreme enough, eh?

In slightly more technical terms, the Swarm is a fuzz that turns your signal into a brutal square wave, then adds analogue harmonies – above, below or both – and extreme frequency modulation. The central ‘species’ switch sets the harmony interval, while the other knobs let you adjust the relative levels of your three sonic components and control just how freakily the added parts are modulated.

This is part of the Royal Series, which basically means it looks really smart and hasn’t had Beetronics’ usual ‘kicked around a car park by some gorillas’ treatment. Like the Buzzter, it has a moody black enclosure with stylish metallic highlights and feels solid enough to survive at least three apocalypses.

With pedals like this, it can be fun to just plug in, hit the footswitch and play a big old E chord without even checking how the controls are set. In the case of our Swarm, the result is an absolutely satanic racket – and we’re not complaining.

It’s a complicated device, but there are two key things to know from the off. First, the fuzz is thick, sweet and aggressively gated; and second, the modulation of the harmonies is never anything less than insane. But before anyone gets sonically stung to death, let’s take a step back and try to work our way through this thing methodically. 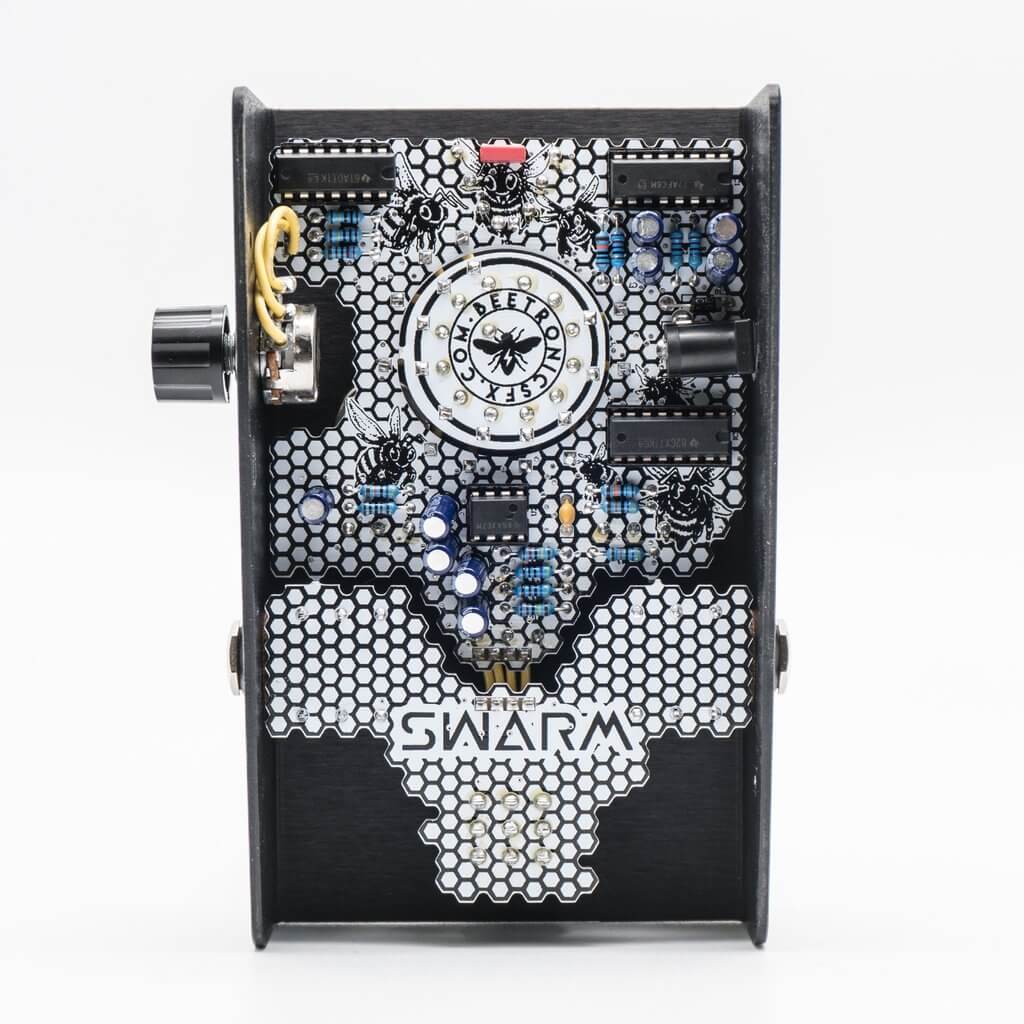 If you turn the two uppermost chickenheads down to zero, you’ve actually got a straight fuzz pedal on your hands – albeit one with two output level controls and nothing else. This fixed fuzz tone is as huge and mellifluous as Beetronics’ best, and the extra-crackly gating effects are a lot of fun as long as you don’t mind kissing goodbye to any kind of sustain.

Now we dial in some harmonies and the really barmy stuff begins. It can sound almost like a standard octave fuzz at certain settings, but there’s an unpredictable element to the tracking that, combined with the sputtery nature of the fuzz itself, means you’re effectively playing in a duet: you on one side, the semi-random whims of the pedal on the other. There also seems to be an envelope-following filter at work in the first few positions of the species switch, adding a vocal effect that ups the bonkers factor even further.

But it’s the pitch-mangling modulation that makes this pedal one for the hardcore noisemongers – it soars, swoops, whines and whoops, while you’re playing and sometimes after you’ve stopped. If you want your guitar to sound like two analogue synths having a punch-up in a pub toilet, this might be just the job. Extreme enough, then? Yeah, pretty much.