There’s plenty of competition out there but could this dual-overdrive stompbox become the connective tissue in your rig? 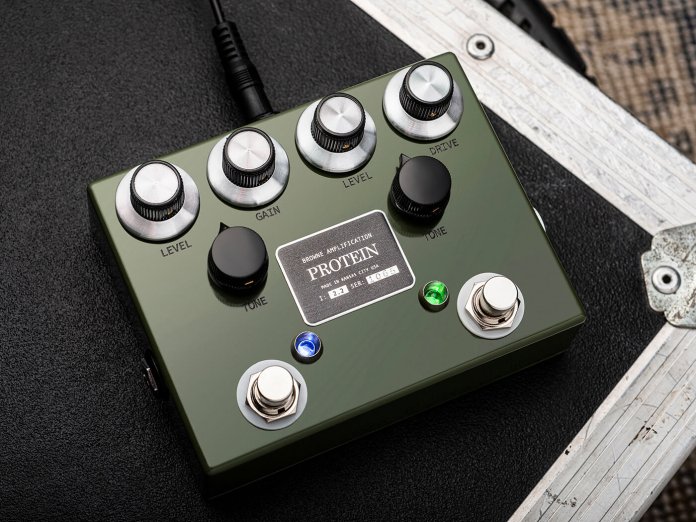 Two overdrives in one box has become the de rigueur format for boutique dirt units. Here, instead of opting for variations on the Klon and Tube Screamer themes, Kansas City’s Browne Amplification has taken inspiration from the 1990s Marshall Bluesbreaker pedal so beloved by John Mayer and the Nobels ODR-1 beloved by, well, most of Nashville.

Though other colourways are available, our unit’s olive-green paint job has something of a military aesthetic and looks suitably battle-ready on the outside while internally, a couple of SMT-loaded circuit boards and a pair of simple true-bypass on/off footswitches complete the package.

Although we generally prefer top-mounted inputs and outputs to maximise pedalboard space, the side-mounted jacks on the Protein pack a clever twist. By utilising TRS cables and flicking some internal switches, it’s possible to separate the two overdrive sides and use them in independent loops in a pedal-switching system.

With near-identical controls and no distinguishing markings, the only differentiation between the two sides is provided by the colours of the blue and green LEDs, which hint at the circuits that inspired them. And those of you who still like to sling a couple of battery-powered pedals in your gigbag are out of luck – the Protein is mains only. 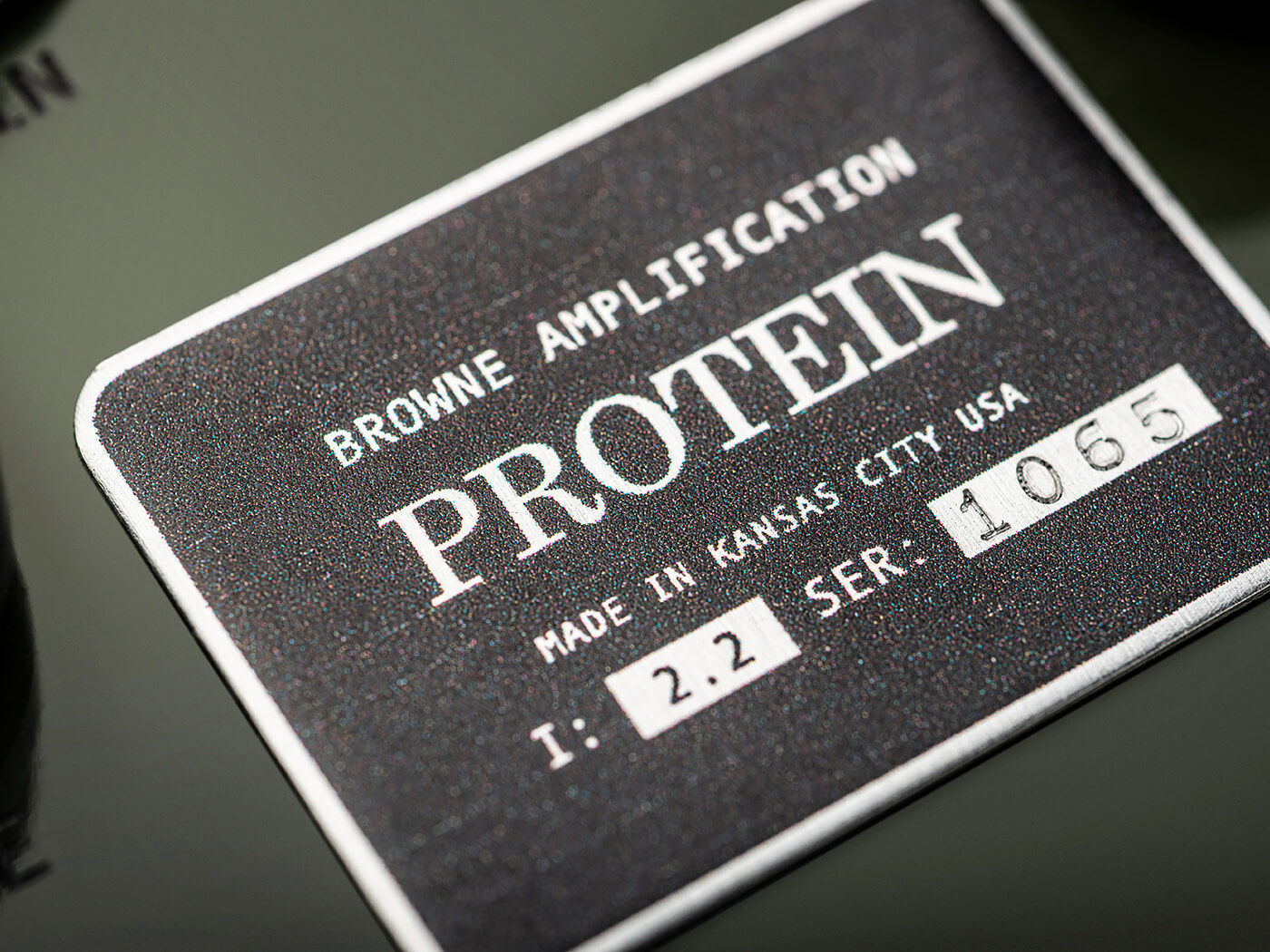 Kicking off on the Protein’s right-hand ‘green’ side with our 1964 Strat into a clean Deluxe Reverb, we’re immediately impressed by its warm, natural overdrive tones, ample volume boost, note definition and touch sensitivity, even at higher settings. There’s less of the distinct mid hump that characterises the other famous green overdrive, and with tones ideal for modern country, Americana, slide and even blues, it’s no wonder that the inspiration for this side of the Protein is a go-to pedal for so many Nashville session cats.

Switching to the ‘blue’ side, we’re treated to an almost HD take on the old 1990s Marshall Bluesbreaker. There’s a smooth, rich boost and low-gain overdrive with a lower-mid boost that particularly flatters vintage Strats, but we hear less of the somewhat woolly bass response of the original unit. The Protein’s wider gain range, increased volume and clarity are a clear evolution from its origins.

Switching to a PAF-loaded Les Paul ups the velvety sustain quota and Beano, Angus and Kossoff are all there if you want them, while the combination of both sides of the pedal delivers some killer lead tones. Happily, even with both sides stacked, background noise is impressively low.

The Protein is a great all-round drive with something a little different to offer, with a fantastic utility overdrive on the green side and a cleverly refined take on the Bluesbreaker on the other. It also works well with whatever combination of guitar and amplifier you throw at it. Golden Browne indeed. 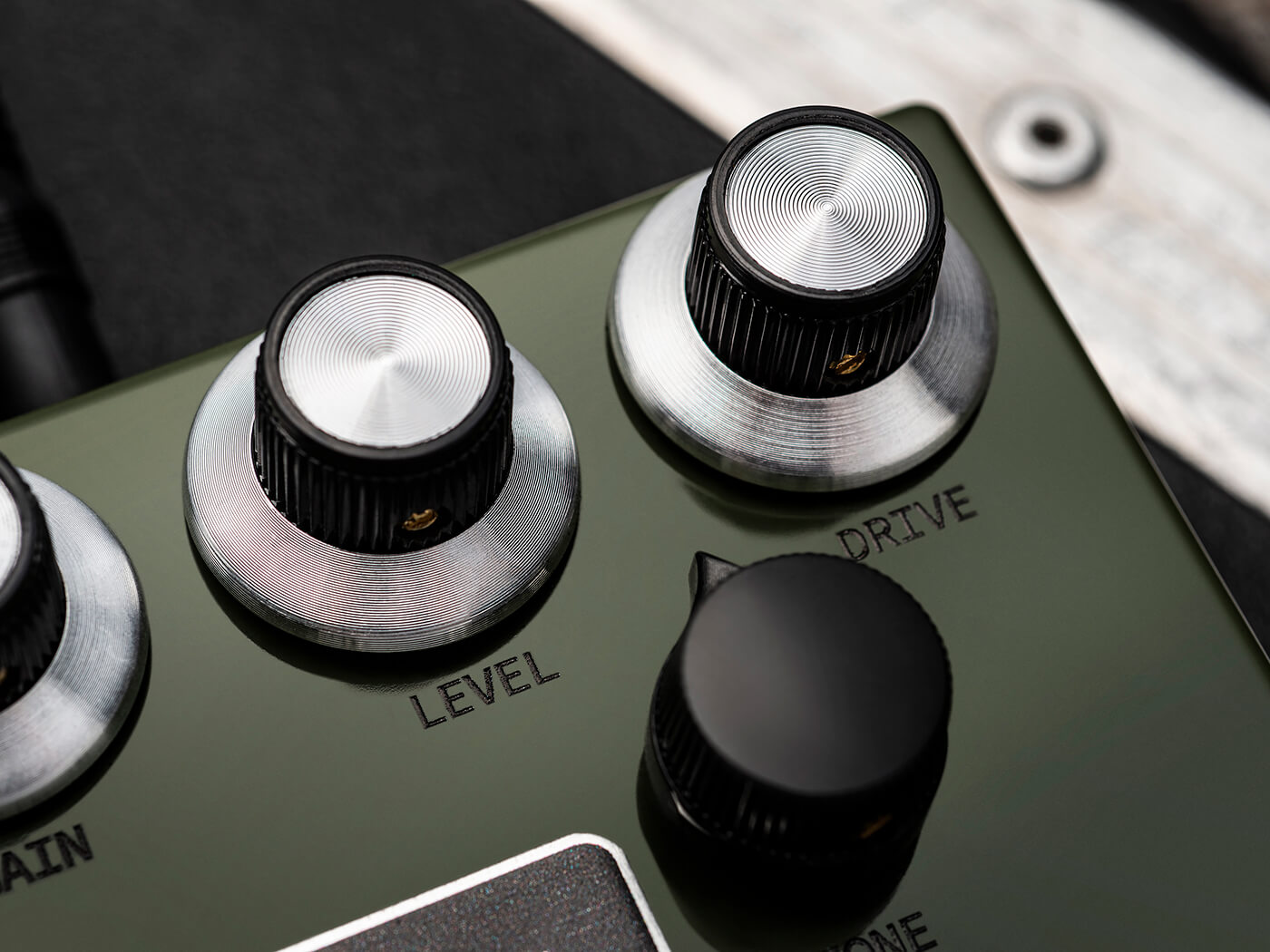