This reissue of a short-lived 80s pedal brings reverse-tape wooziness and fuzz mayhem to your repertoire. 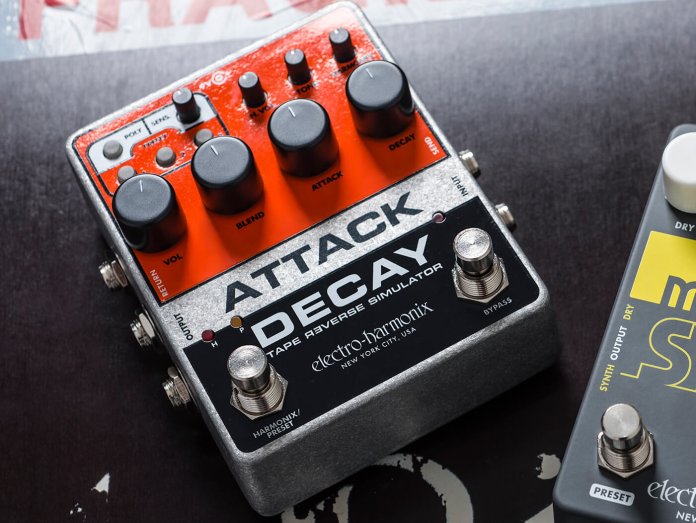 The first iteration of the EHX Attack Decay pedal was made for a few short months between 1980 and 1981 with original examples now commanding high prices on the vintage market. This reissue, revealed alongside the Mono Synth at NAMM 2019, brings the same reverse-tape wooziness and fuzz mayhem of the original, with more control and a compact footprint.

Effective use of this pedal requires a rudimentary understanding of two acoustic principles: attack being the initial creation of a note, and decay, the way the tail of that same note fades away to nothing. Here, each of these parts of the envelope has a knob assigned to it, allowing you to manipulate both vital aspects of your sound with surgical precision. However, this is not exactly a plug-and-play pedal, so a quick cup of tea and some RTFM time is advised.

It should be emphasised that while the Attack Decay simulates the sound of a reversed tape, this is not actually a reverse delay. For that, you’ll need a delay pedal with a dedicated reverse function. Instead, with the attack knob set to 12 and the blend at maximum, we have a smooth waveform that does sound remarkably close to the tape effect. Reducing the attack, lengthening the decay and adding more dry sound to the mix gives you atmospheric swells that emerge from beneath your playing. Engaging Poly mode means that every note triggers its own attack. Very beautiful.

There are even more options available when we factor in the internal effects-loop and expression-pedal functions and start to select the shapes of our attack and decay from a choice of linear, parabolic and s-curves. With a full attack and cut decay, we get an immediate note that is over almost as soon as it begins. EHX refers to this as a banjo sound, which is unkind. To our ears, it is more like the fake koto sounds so beloved of hair-metal players in the early 1980s.

Given EHX’s pedigree, it comes as no surprise that the built-in fuzz sound is a gnarly, saw-toothed good time. Delving deeper, we find that the attack and decay controls create inspiring bowed string and synth-like sounds which, with a bit of reverb and delay, can dramatically elevate a lead-guitar part. Indeed, with slightly longer decay, we summon up a muted-fuzz swell sound that we find ourselves using for soundtrack recording within an hour of firing up the pedal for the first time.

And there’s much more to the Attack Decay and Mono Synth than we’ve managed to cover in these reviews – both units are capable of inspiring textures and while each in its own way straddles the fine line between the sublime and the ridiculous, they have the potential to deliver some truly beautiful moments. 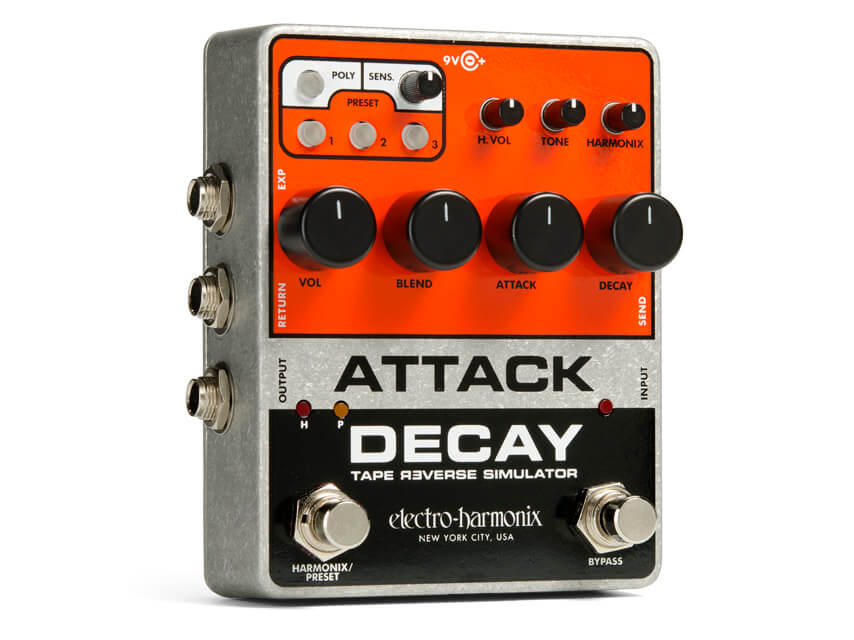