If you’re hankering for something that looks and sounds different to anything else on your pedalboard, it might be time to look to the Baltic state of Latvia for inspiration. 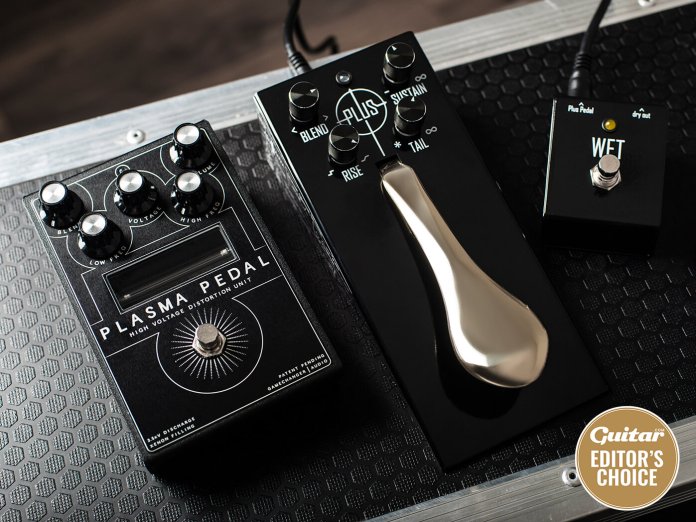 The thing about Gamechanger Audio is… well, they’ve called themselves Gamechanger Audio, haven’t they? Which means everything they do has to be at least a little bit revolutionary, otherwise there’s a danger that they’ll look a little overconfident.

This was not an issue with the Plus Pedal, which was hailed as a show-stealer at NAMM 2017 with its ingeniously layered sustain effects. The follow-up Plasma Pedal has now arrived in the UK, so can this Latvian start-up change the game all over again? Let’s find out… and give the Plus our considered post-honeymoon analysis while we’re at it.

Credit to the designers behind the Plasma for coming up with something every bit as distinctive-looking as the Plus. It’s a more conventional stompbox in terms of layout, but there’s a whiff of Dr Frankenstein’s lab about the sparking gas-filled tube across the middle. So is this a visual gimmick, or does it actually do something genuinely innovative? After six or seven reads through the manual, we’re still not entirely sure.

The basics seem to be as follows: the pedal converts your clean signal into a series of impulses that are sent to a transformer, where they’re amplified to high voltages. The current is then discharged through the aforementioned tube of xenon gas, creating a little blue firework display as the discharge is converted back into an audio signal.

The obvious question is why you’d bother going through all that rigmarole just to rough up a guitar sound – we’re hoping to find an answer to that in the performance of the pedal. There’s a dial for adjusting the voltage, plus controls for treble, bass and clean/distorted blend; a switch on the back lets you decide whether the EQ treatment is also applied to the clean part of the pedal’s output.

On the surface, the Plus seems like a much simpler device. Inspired by a piano’s sostenuto pedal (the one that only sustains those notes already ringing when it’s pressed), it’s been described as a smart looper: play a note or chord, press down the foot pedal and listen as it rolls back at you minus the transient attack. You can push down again to add more layers, or simply play normally over the top.

There’s more to it than that, though – including control over how quickly the loops fade in, how long they sustain, and how many layers of sound you hold onto (up to five). You even get an effects loop for adding extra treats to the repeating sound only. Throw in the optional footswitch and you can keep the dry signal muted while you’re building up layers, then kick it back in when you’re ready to ruin everything with your sloppy solo.

Whatever electronic purpose the Plasma Pedal’s xenon tube is actually serving, there’s no denying it’s a lot of fun to watch the blue waves dance while you’re playing. As an added bonus, it also sounds pretty good.

This is very much a high-gain filth machine, creating a wall of fuzzy fury that’s smooth in its thoroughly flattened dynamics, but rough in the crackling rage of the distortion itself. This is particularly noticeable playing single notes, when it can sound as if you’re being accompanied by a live bonfire.

But perhaps the most distinctive thing about this pedal, not counting that bewitching plasma dance, is the squishy splat-fuzz effect created by pulling back on the voltage. As the level of saturation comes down, notes get more and more brutally pinched – and ultimately gated out completely. Sputtery gating tricks are nothing new, of course, but this variant on the formula does have its own lower-than-lo-fi voice that Jack White fans will enjoy.

The tonestack is an unusually powerful tool in its own right, letting you add a thunderous whump of low end or assail your listeners’ ears with something much more bright and shreddy – or even zero both dials to emphasise the gnarly midrange. Gamechanger claims this tonal versatility is down to the unique nature of the circuit: the fact that it’s effectively killing your dry signal and then rebuilding it allows for a wider range of frequencies to be brought into play. Our eyebrows were well and truly raised… but the evidence of our ears suggests there could be something in it.

The Plus Pedal is another fine-looking piece of kit that’s been made in Latvia to what are clearly high standards of construction. As a result, it’s quite heavy as well as being considerably less compact than its most obvious rival, the affordable but basic Electro-Harmonix Freeze.

There’s a long manual in the box, and a short one on the side of the pedal, but you don’t need either to get started here. Follow the recipe outlined a few paragraphs ago and you’ll soon be basking in otherworldly ambiences that sound more like church organ drones than anything you might normally expect to hear emerging from a mere guitar amp.

It’s only when you want to move beyond the novelty of this basic ‘smart looping’ function that a bit of reading comes in useful. The four knobs allow for precise tailoring of the loops’ behaviour and it’s the added features – the two-stage foot-pedal allowing half-volume layers, the switchable dry output, the built-in effects loop, the ability to let one cycle fade out while another keeps going – that open up this gadget’s creative potential.

Don’t bother getting one for your Showaddywaddy tribute band; but if you’re looking to push the boundaries of post-minimalist texture-painting, it could be a handy weapon to have.

In truth, much of what this pedal does could be achieved with a combination of two or three ‘normal’ stompboxes; but nothing sounds, or feels, quite like the Plus. Whether it really is a game-changer on the scale of the DigiTech Whammy or Line 6 DL4, we’re not so sure… but you can believe at least some of the hype.