This collaboration between the slide supremo and Jackson Audio promises to redefine the concept of transparent overdrive. 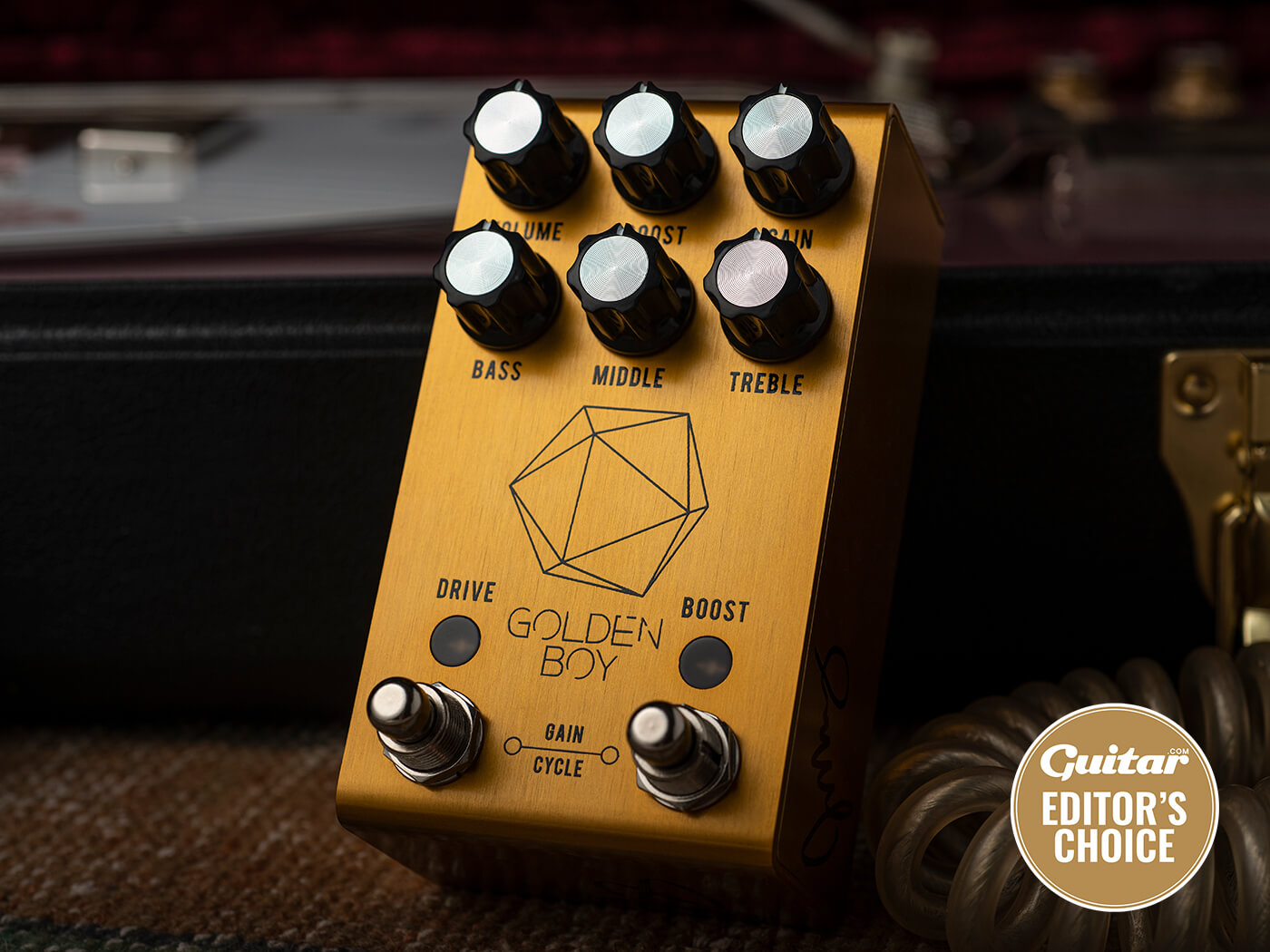 A potential King Of Tone killer with no waiting list and greater versatility.


Joey Landreth is one of the most admired guitar stars of the Instagram age, and the Golden Boy is the result of a collaboration between the Canadian guitarist and Texas-based pedal brand Jackson Audio – an offshoot of Jackson Ampworks.

Despite residing in a compact housing with top-mounted jacks to save on pedalboard real estate, the unit features two footswitches which provide access to four flavours of overdrive clipping diodes and MOSFET boost respectively. Press the switch to toggle drive or boost on or off, hold it down for more than one second to access the program mode, then tap to cycle through the presets (each denoted by a different LED colour). Hold it down again to exit program mode and select the one you want to use. Simple. 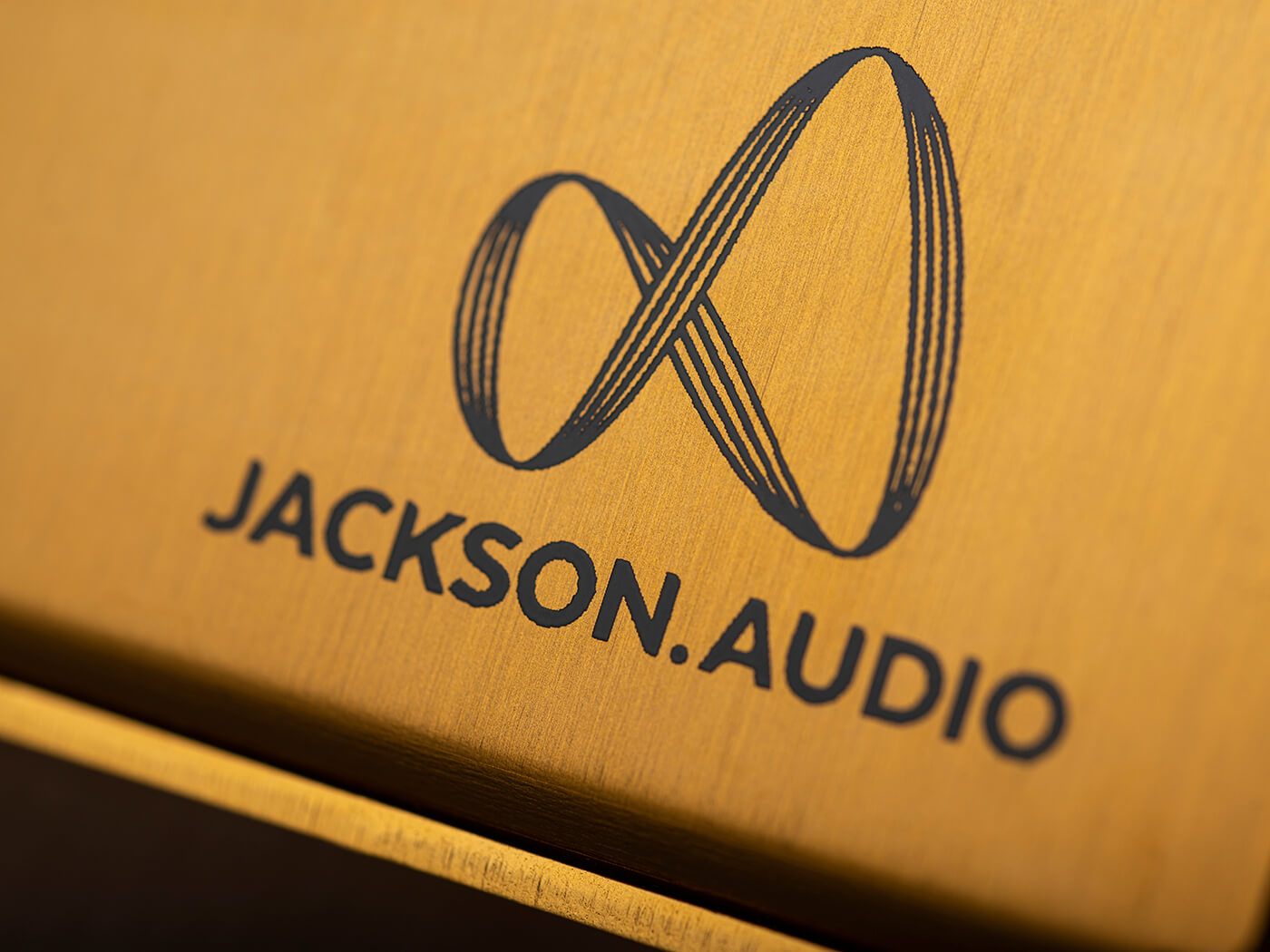 Versatility is the theme here as you also get a three-band Baxandall-style EQ with 12dB boost/cut per control, extensive MIDI control and innovative ‘gain cycle’ functionality which ramps up the gain in 25 per cent increments, up to a maximum of 100 per cent, when you press both footswitches simultaneously.

The boost is in its own true-bypass loop so it can be used independently of the drive circuit, or stacked. There’s even an easter egg in the form of an internal jumper switch that toggles between silent boost-knob rotation, and a mode that crackles when you turn the knob like an old-school MOSFET circuit, but offers five per cent more gain at the highest setting. 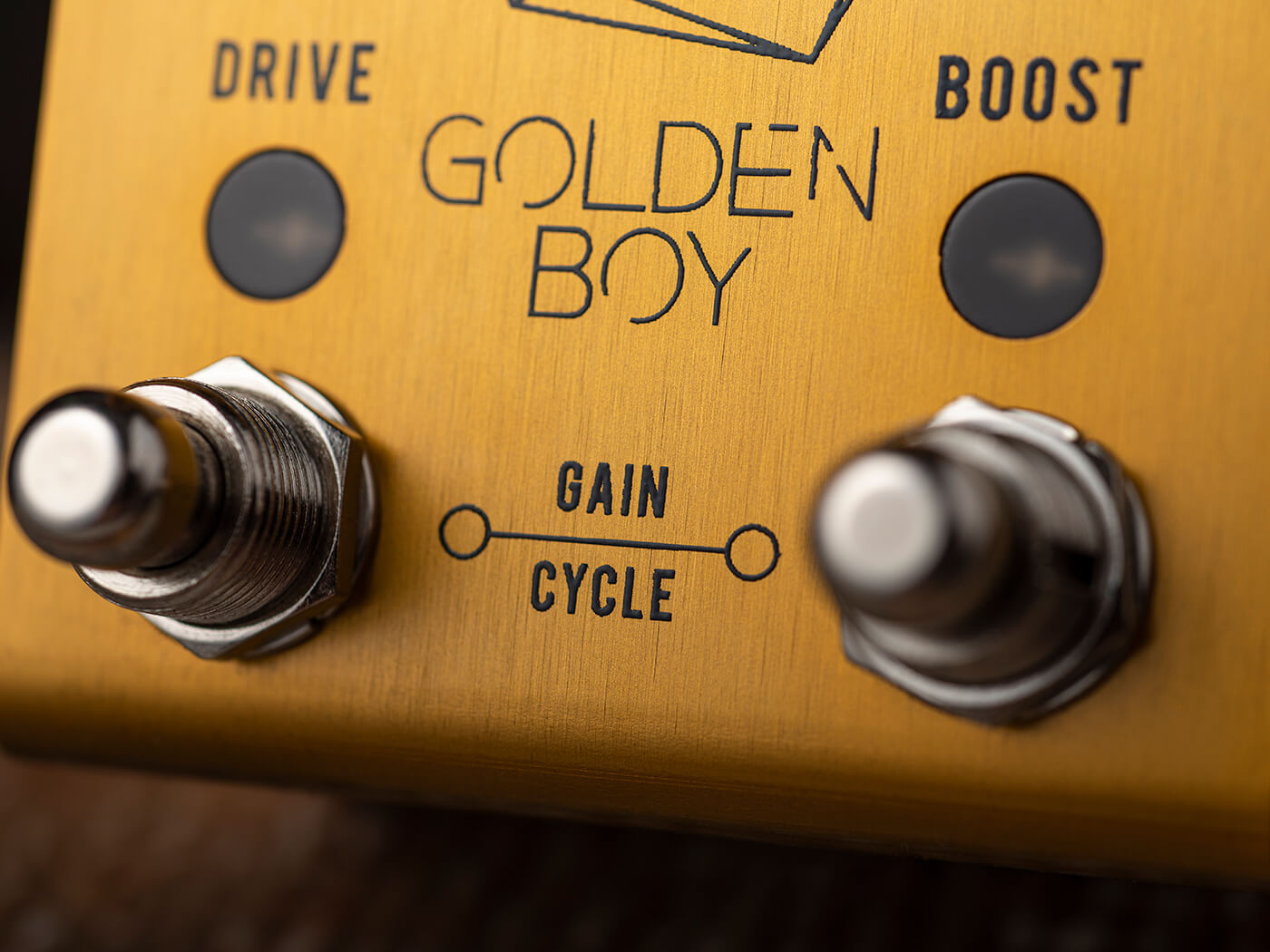 While not as revered as the Tube Screamer and Klon, the original early 1990s Marshall Bluesbreaker pedal deserves its place in the overdrive hall of fame. The circuit has provided the inspiration for some of the most lauded boutique units of recent times, not least the Analog Man King Of Tone and indeed, the Jackson Audio Golden Boy.

Though it’s often referred to as a ‘transparent’ overdrive, the Bluesbreaker infuses your tone with a mid-rich, touch-sensitive overdrive that’s subtle at lower gain levels and dripping with harmonics when wound up. The Golden Boy resides firmly in this ballpark, and compared directly to an original 1990s Bluesbreaker and an Analog Man King Of Tone, it more than delivers.

In the blue drive mode, the symmetrical clipping of four silicon diodes nails our favourite KOT tones, creating natural, uncompressed break-up with blooming sustain that works beautifully with our Strat and black-panel Fender. Along with the variable array of boost options and the comprehensive active EQ, if this was all the pedal did, we’d be happy. But there’s much more. 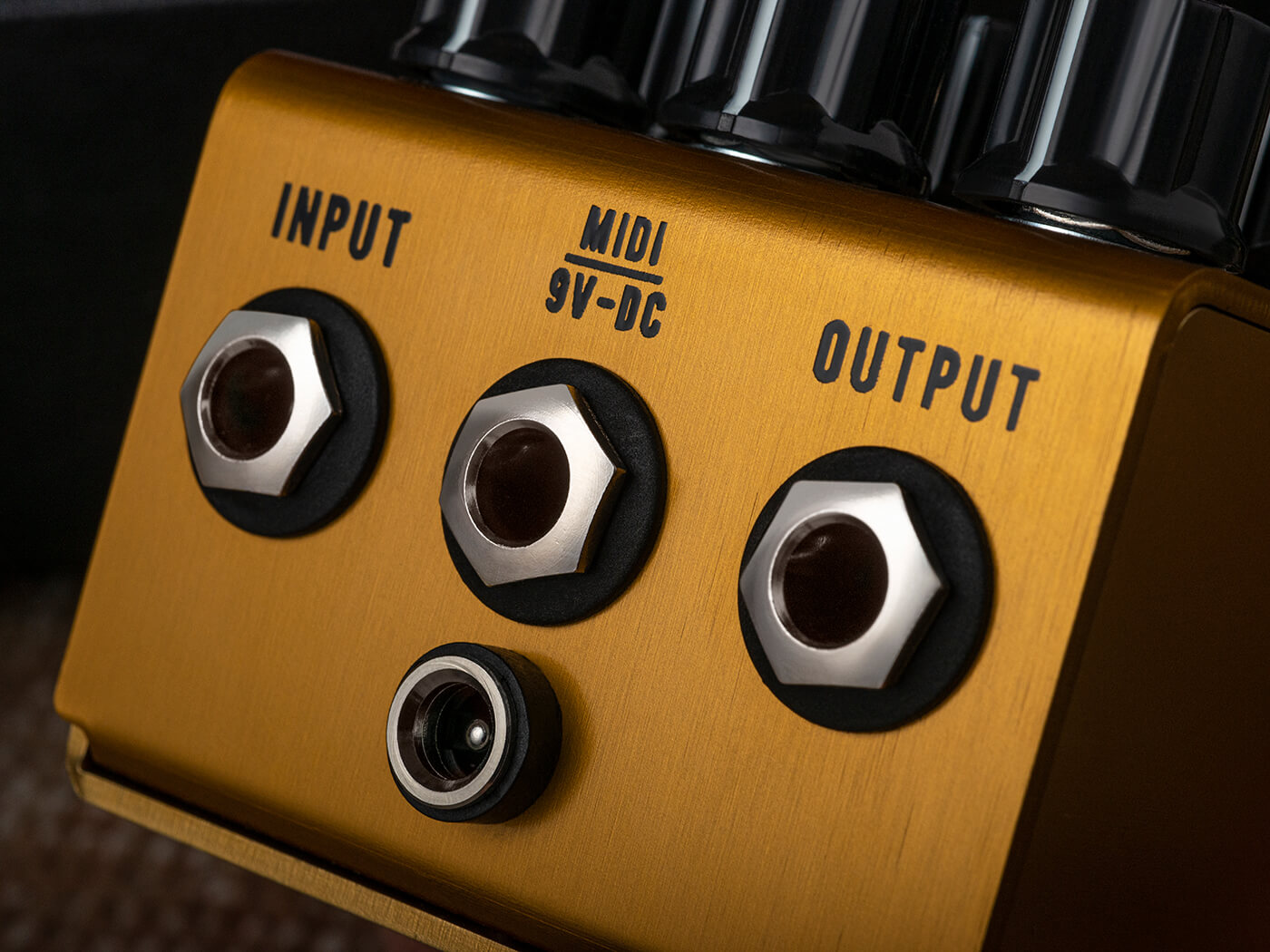 Wind up the gain with a Les Paul for seriously rich Beano Album-style tones, but with a significantly wider gain range, volume and EQ flexibility than the original Marshall pedal. Switch to green mode and two symmetrical clipping diodes give you the compression, mid hump and drive of – you guessed it – a great Tube Screamer.

The asymmetric clipping of magenta mode with a P-90 Goldtop is fantastic for everything from slide work to Americana rhythm parts that sit beautifully in a mix. In a further revelation, the amber mode uses a pair of red LEDs to deliver a seriously punchy high-gain, high-headroom 1990s heavy rock tone.

Jackson and Joey Landreth have really hit a home run with this pedal, and it has none of the of consistency and reliability issues that can plague vintage pedals after decades underfoot. Copping the tones of some of the stompbox overdrive greats is a triumph for sure, but the crowning glory is the vast array of versatile gain tones and features that mean it could easily replace two or three units on your board.

Joey Landreth on the birth of the Golden Boy

“I got to know Jackson Audio through their Prism pedal,” says Landreth when we quiz him about the R&D behind this hugely impressive overdrive pedal.

“Brad (Jackson) mentioned to me that he was working on a compressor called the Bloom and asked if I had any ideas for it. We got to know each other over the course of that project and I went to Nashville to shoot some videos for the launch. They also made their Broken Arrow overdrive pedal around that same time and gave me one of those to try as well.

“The Broken Arrow is Brad’s version of a Tube Screamer-style circuit, but with switchable diode clipping options and an integrated MOSFET boost. I loved everything about the pedal, especially the EQ and the innovative control functions, the gain cycling and the simple yet innovative switching system… but tone-wise I’ve never been a huge Tube Screamer guy.

“After touring with it on my board for a few months, I approached Brad with the idea of taking that same platform but incorporating something like the old Bluesbreaker style circuit instead of the Tube Screamer. We took a look at what some of the popular BB-inspired pedals were doing differently and tried to represent them tonally while maintaining our own sound. I really think it does that!

“To be honest, even if I wasn’t associated with this pedal I’d be using it – it just has ‘that’ sound. It captures all my favourite BB-inspired tones and the MIDI integration to control the switching is a huge bonus live. It’s a must-have for the working guitar player.” 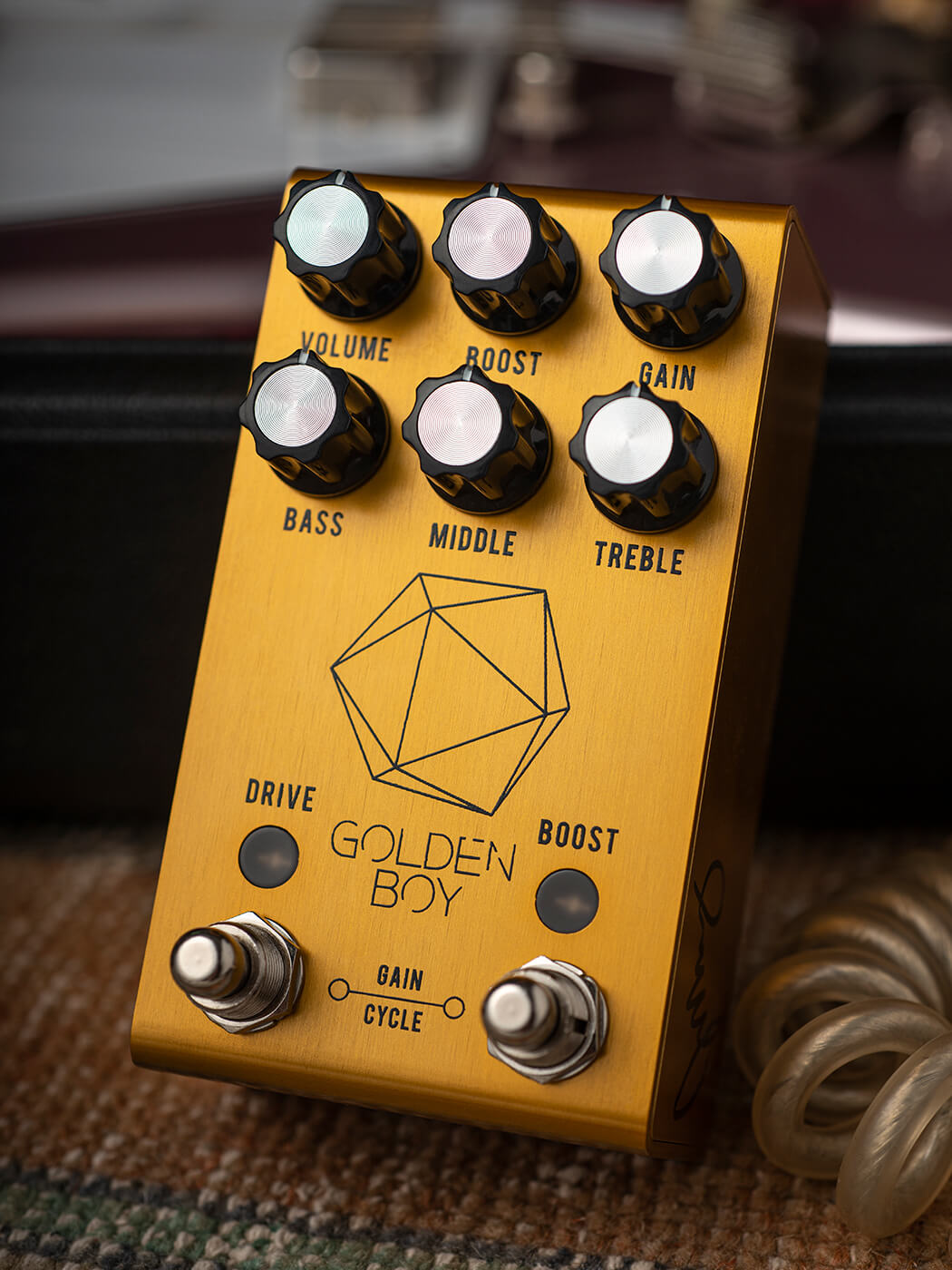