A brace of hand-wired anger boxes from newcomers to the effects scene. 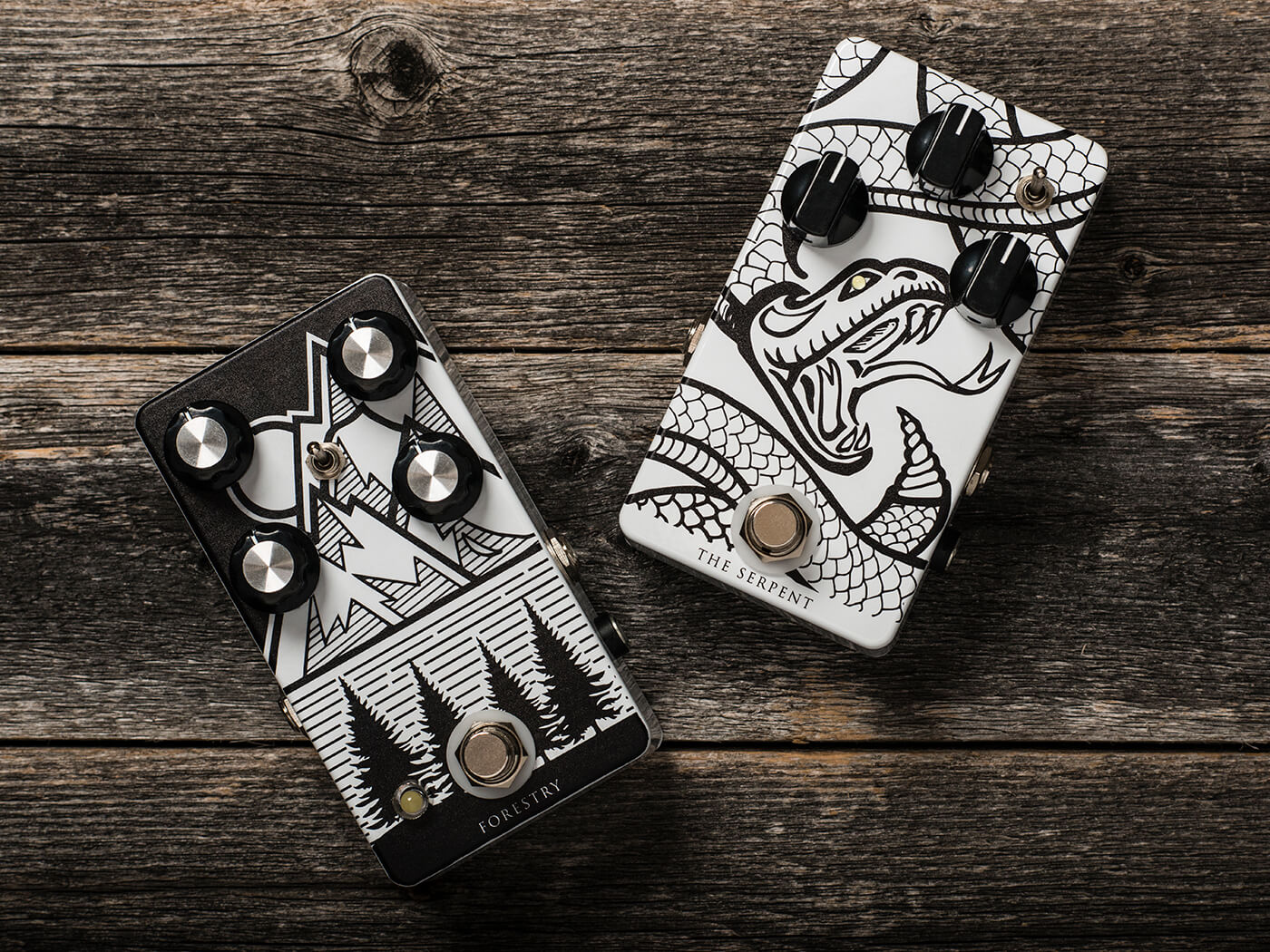 Originally starting as hobbyists building pedals for friends, Singapore’s Mistweaver Effects will be a new name to most of you. Very new, in fact, with the first units hitting the market as recently as 2018. Since its launch, the brand has garnered an impressive amount of attention from press and players alike, and we were lucky enough to snag an example of both models in Mistweaver’s nascent range, the Forestry overdrive and the Serpent fuzz.

Mistweaver pedals come in single berth white enclosures with silk-screened black graphics that straddle the fine line between handmade and homemade. While the monochrome aesthetics are nice enough, it would be really helpful to at least attempt to label the control knobs. As it stands neither pedal willingly gives up the secrets of its inner workings until you consult the manual.

Mistweaver tempts hubris by describing the Forestry overdrive as its “Dumble in a box” – a brave claim from such a young company. However, the use of NOS Soviet-era germanium diodes is encouraging, as is the mini-toggle switch offering both symmetrical and asymmetrical clipping modes. The coquettishly anonymous knobs are revealed to be volume, gain, tone and presence controls which makes sense for an amp-inspired stompbox. Given that a pedal of this nature is going to live or die by its responsiveness to nuances in picking attack and dynamics rather than control complexity, it’s an approach we can get behind.

The Serpent eschews the tonehound niceties of its sibling in favour of the beautifully chaotic aggression of a Muff-style circuit. In this case it’s directly inspired by a vintage green Russian Pi but with a couple of tweaks to elevate it above the norm. As expected, a trio of knobs takes care of volume, gain and tone and there is also a mini contour switch which moves between flat, scooped and boosted mids. Delicious. Once again, the identity of each knob is only given on a need to know basis. 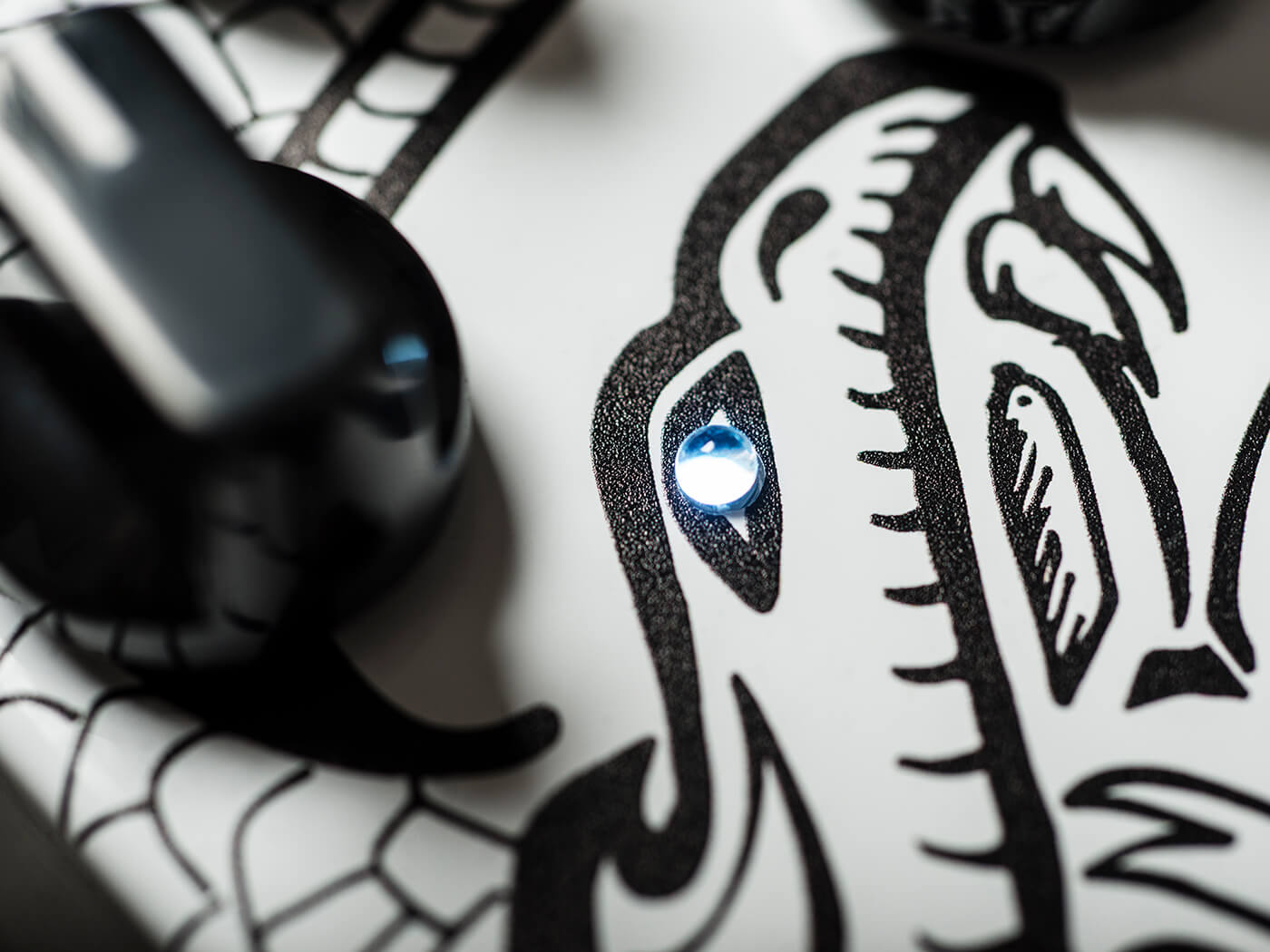 Plugging in the Forestry with all the controls pointing half-way and the mini toggle switch flipped up to symmetrical overdrive mode unleashes an extremely pokey and present overdrive sound. Part of this is due to the fact that unity gain is at about 30 per cent, meaning that a potentially brutal amount of boost is available through the pedal’s volume knob alone allowing for all sorts of amp punishment. Impressively, the Forestry responds very well to the nuances and detail of bare finger playing and it’s possible to go from a full clean to a rich overdrive purely by varying the strength of your attack.

Switch to non-clipping mode and the pedal retracts its claws and works more like a clean boost – and a very good one too. As expected, the asymmetric clipping section is more aggressive and ragged than its symmetric sibling. It’s still a sophisticated and beautiful sound, just dialled up a notch or two.

The Forestry offers plenty of tonal versatility from both the tone and presence knobs going easily from a molten tweed amp roar to the sting of a wound-up silverface. Does it sound like a Dumble? Maybe not exactly, but it certainly rivals other pedals vying for your attention in that niche but crowded market. Time to meet The Serpent… 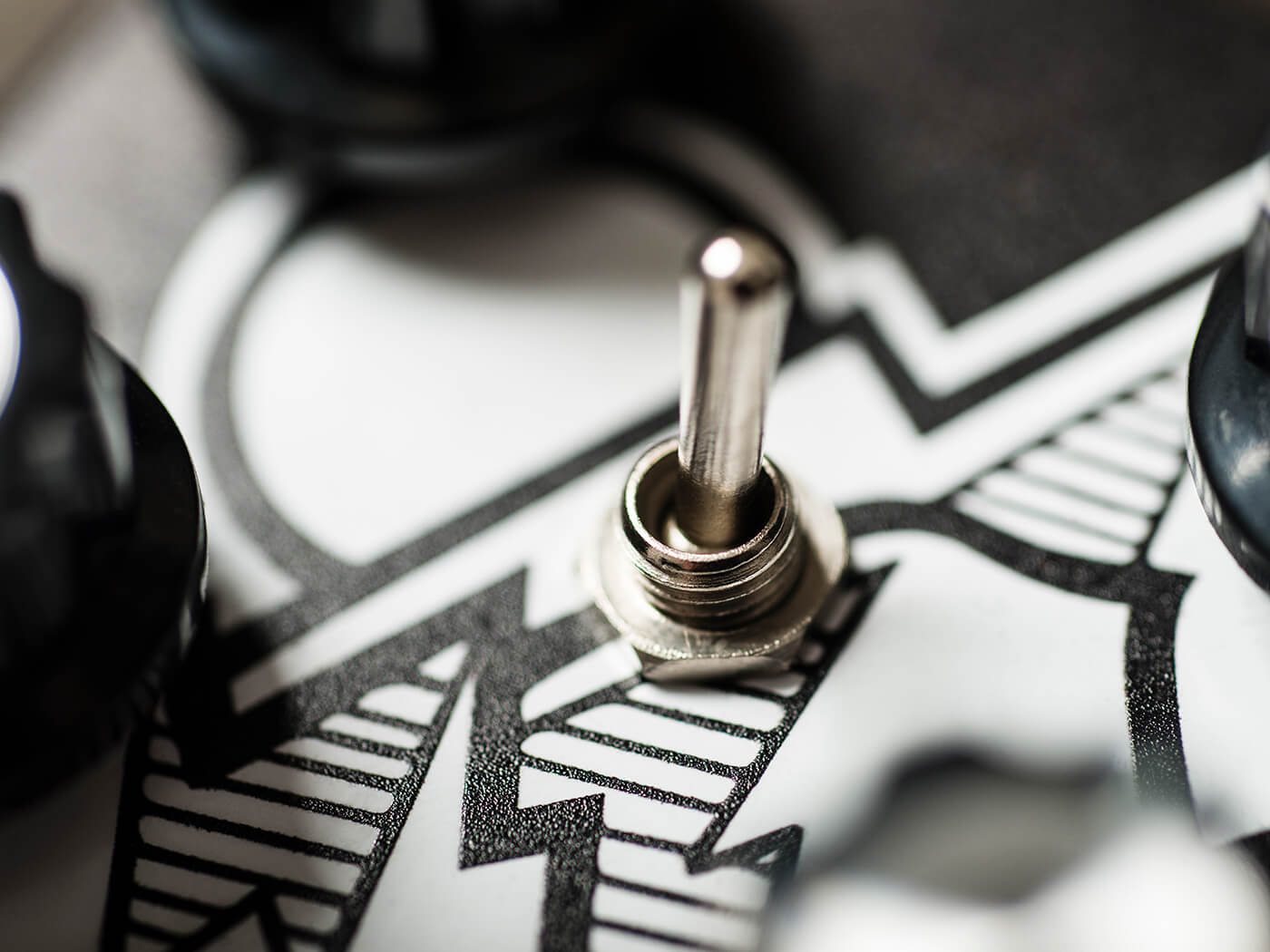 The dedicated Big Muff Pi enthusiast now has a dizzying array of options to choose from, with everyone from EHX to myriad boutique builders offering infinitesimally differing takes on the original pedal designs – the Green Russian flavour is certainly a great place to start for any player dipping their toe in the turbulent waters of Muff for the first time. A Big Muff is best enjoyed with an amp with plenty of midrange and accordingly, we plug into a handwired Vox AC4 and dial it up until it starts to grumble.

The Big Muff is well known for its ability to lay down frightening amounts of girthy fury, from enraged fuzzopotamus to neverending buzzsaw, and the Mistweaver Serpent certainly lives up to the spirit of the original with our first exploratory power chords. Once again, the initial volume of the pedal is something fierce, leading us to set unity gain at around 30 percent for balance while the familiar Muff roar comes through like an angry bastard. It’s thick, throaty and will cheerfully render anything other than powerchords or single note lines into sludge, but it is glorious for soaring bent note solos. It’s grippy, expressive and very musical, Just what you want from a good Muff. 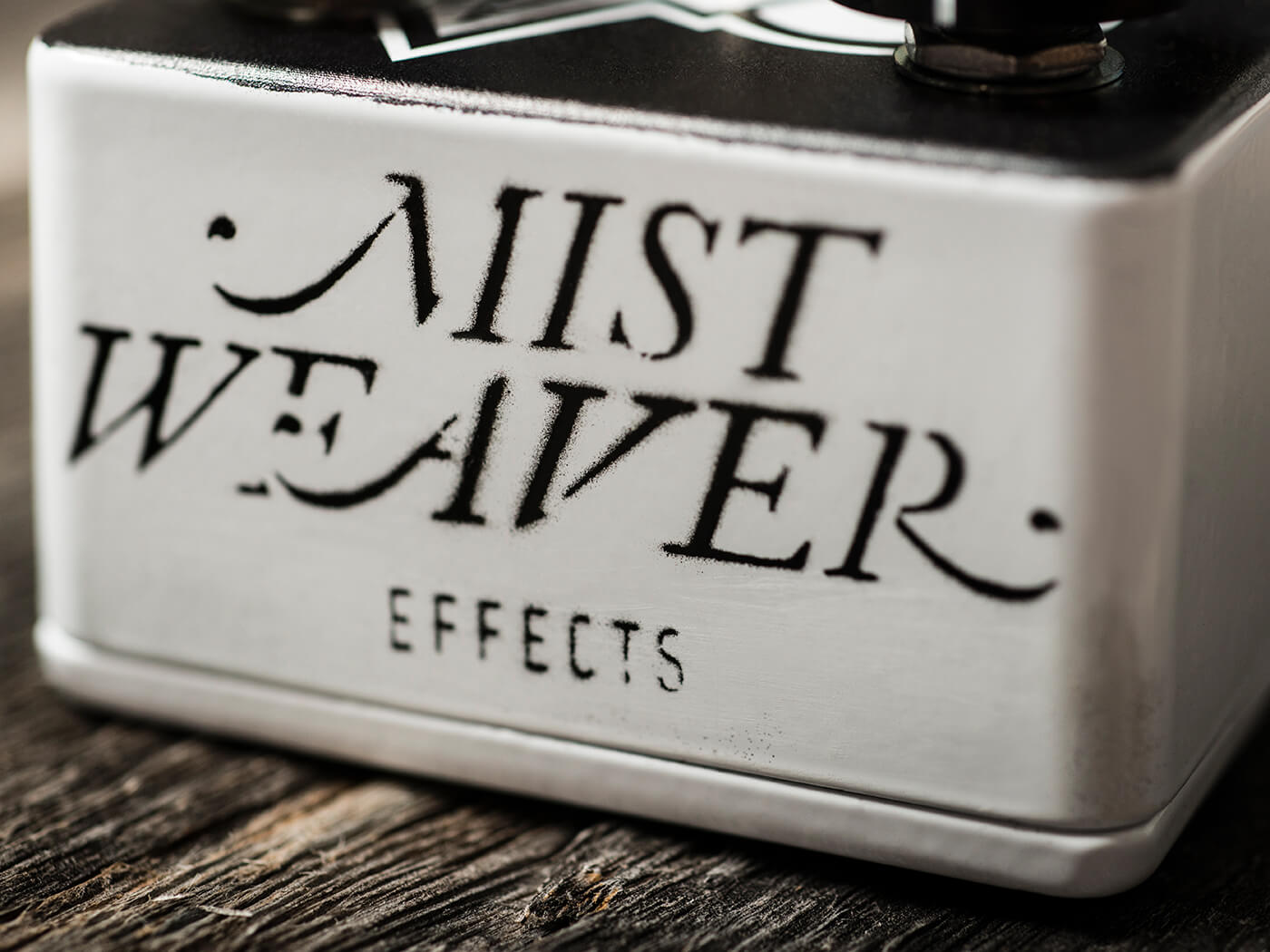 The aforementioned contour switch works as advertised when it comes to midrange variations. Scooped mids can be a thing of wonder for the heavier styles and The Serpent kicks out some powerful doomy vibes that will appeal to the more cloven-hoofed guitarist. Boosting the mids takes us straight into desert/stoner rock territory, which makes for a joyful time dusting off our Monster Magnet and Kyuss riffs. While three knobs and a classic Big Muff layout make navigation more instinctive than the Forestry, it would still be nice to have the controls labelled.

One thing we notice as the dust settles is how well these pedals work together. Pushed into each other The Serpent and Forestry make for an impressive double act, with both pedals working very well as part of a cascading gain stage set-up.

Looking at the evolution of other companies such as JAM pedals and Z.Vex from their hand-painted, made-in-a-bedroom origins to their current status as world straddling overlords of Planet Tone makes us feel that the future for Mistweaver pedals could certainly be bright. Ok, the graphics are a bit sophomoric but there is no arguing with the sounds on offer. There are a lot of shoutier companies in this marketplace, but in producing this pair of great-sounding pedals for their opening gambit Mistweaver has got the hard part right. We look forward to seeing what the company comes up with next!