When Skindred guitarist Mikey Demus teams up with ThorpyFX to design his own distortion pedal, you know it’s going to be rocking… and a bit clever.

You don’t see many guitarists actually making their own gear – well, it’s a lot easier just to buy the stuff with all those colossal Spotify royalties. Ahem. But when Mikey Demus of Skindred realised his perfect distortion pedal didn’t quite exist, he decided to go out and make it happen himself… with a little help from one of the UK’s most respected stompbox builders.

Skindred are a British band who play modern metal with a ragga twist. There’s a lot of heavy drop-tuned riffage involved and Mikey usually relies on cranked Orange amps to bring the noise. The only trouble is, sometimes when you ask for Oranges, life gives you lemons – or at least, satsumas.

“We do a lot of festivals where we have to hire backline,” he explains. “I normally use Orange amps and I can get away with something like a high-gain Marshall sometimes, but I was constantly having this problem where they’d provide a Fender Twin or a JTM45 – lovely amps, but they don’t really do the detuned chuggy-chuggy thing that I depend on. So I’d always carry a couple of ‘amp saver’ pedals with me, but none of them were ever quite right.

“Then I had an epiphany on a plane one day. I was thinking about the kind of pedal I wanted and what route I could take to get it, and it hit me: ‘Why don’t I just do this myself?’ So I had the idea to start a company to put some edgy UK-made guitar effects out into the world – and the first task was to make a high-gain metal distortion pedal, something that could transform a relatively tame amplifier into a big box of doom and destruction.”

He contacted ThorpyFX supremo Adrian Thorpe for advice, but that advice quickly turned into a new joint venture, named in honour of the guitarist’s lustrous face-forestry. This, the Red Mist, is Redbeard Effects’ first pedal… which does rather beg the question of why it’s called Mk IV.

“Because I’m really fussy!” laughs Mikey. “This is the fourth version – I kept wanting more gain on tap and it was important not to lose the bottom end, as I do a fair bit of detuning and I’m the only guitarist in the band so I need a big sound… but it still had to retain the tightness you need for percussive riffing.”

Helping users to dial in that balance of tightness and bassy thump is a three-way active tonestack, as well as the usual knobs for gain and output volume. The mids control is a gyrator-based bandpass filter and Mikey describes this as “the fun knob”… for reasons that will become clear soon enough.

It’s a nice-looking compact pedal in a classy brushed-metal enclosure and close inspection – both inside and out – reveals something of the military-grade solidity of Adrian Thorpe’s own products. In fact, the bit in the manual about one per cent metal film resistors, WIMA and Panasonic capacitors and gold-plated PCBs could almost have been copied and pasted from the ThorpyFX website. Now that’s encouraging.

Browse the many Skindred live videos on YouTube and you’ll see left-hander Mikey grinding away on a range of fairly standard Fender and Gibson guitars, as well as a mighty sexy signature Manson; so no EMGs or pointy headstocks will be required for this test. Step one, then, is to put our favourite SG into drop-D tuning and plug the Red Mist into a Blackface-style combo – the kind of amp that most definitely isn’t capable of summoning the gods of hard rock by itself.

The recommended start-off point for exploring this pedal is with all five controls just past halfway. It is, as expected, instant metal – and the sound just gets bigger and more addictive as you nudge the gain up towards full blast.

It does stay tight in the bottom end, as promised and this a great tone for blasting out meaty low-down riffs as well as dancing up the fretboard for the occasional solo screech. Both bass and treble controls are highly responsive, allowing precise tonal tailoring to get the best out of your guitar and amp – and they can also be pushed to extremes if you’re looking for gnarly ‘character’ sounds.

But the really bonkers bit of this pedal is that mids control. For most of its travel, it behaves conventionally, letting you push the middle frequencies for more Orange-style cut or dip them out for a fizzier, more devilish voice. Right at the ends of the dial, however, things get a bit strange.

Turn it fully anti-clockwise and there’s a sudden plunge into ultra-scooped mode, which can be absolutely vicious depending on how reckless you are with the treble and bass knobs. The only drawback here is that the overall output drops significantly, but there’s more than enough volume on tap to bring it back up to bypass level. 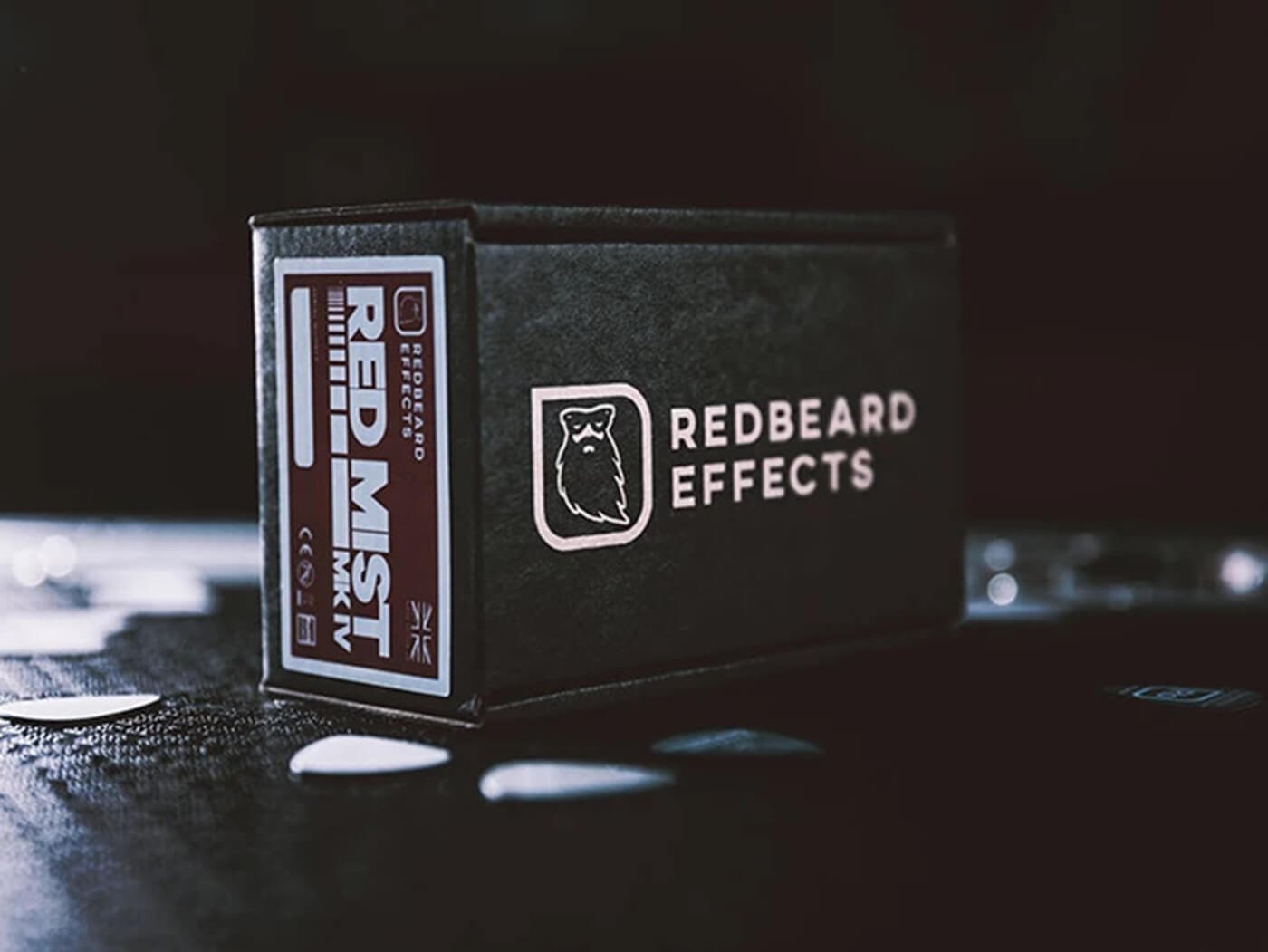 Then we crank the mids to full and a whole different species of wildness is unleashed. It’s not clear exactly what’s going on here, but it seems to involve an extra level of thick, frenzied gain – accompanied, as soon as you stop playing, by a self-oscillating feedback squeal that can be tuned (more or less) by tweaking the other controls. It’s downright lethal; and if you’ve ever acted irresponsibly with a Z.Vex Fuzz Factory, you’ll know how much fun this kind of chaos can be.

The Red Mist, then, is a solidly built box of pure metal with a couple of bonus tricks to lift it beyond mere doing-the-job competence into something more inspiring. It’s a helluva debut from the Redbeard name – and there’s more to come.

“We’ve already got a second pedal done and we’re developing a third one at the moment,” reveals Mikey. “The next one’s pretty ludicrous in its own right – it’s very different to the Red Mist, but still an extremely hazardous little box and the third will be the same again.” Bring ’em on!