Gather round, ladies and gentlemen, for the very latest in distortion and overdrive… but do Snake Oil’s tone-curing elixirs really work? 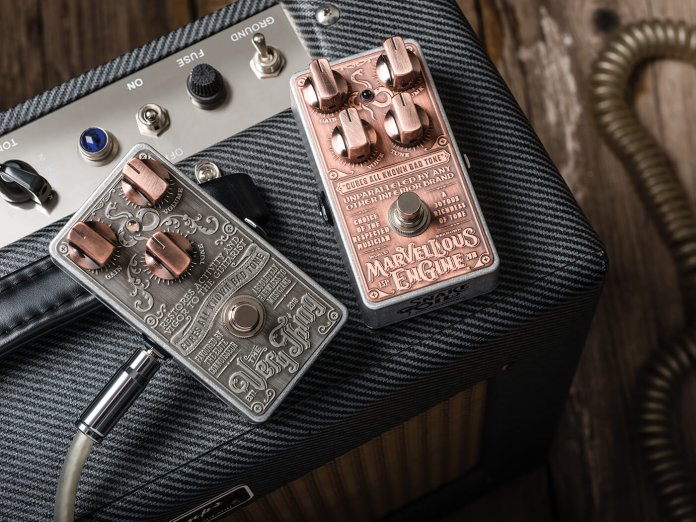 You probably know Rob Chapman as the bearded shredder in all those Andertons YouTube videos, or possibly as the man behind Chapman Guitars. Well now, thanks to a collaboration with Mythos Pedals founder Zach Broyles, he’s also a stompbox peddler.

It’s hard to dislike the playful branding of Snake Oil Fine Instruments, harking back to the florid product marketing of the 19th century – long before the Advertising Standards Authority spoiled everyone’s fun by telling them not to make stuff up. Luckily, once you’ve had a titter over all the daft words, you’re left with a pair of pedals that actually look extremely smart… and ought to sound pretty tasty as well.

The thing is, having fun with product design doesn’t have to mean you’re selling a mere gimmick. Zach Broyles knows his way around a circuit diagram, and these pedals are built in the UK – thus the reasonable but hardly giveaway pricing.

First impressions of build quality are certainly good, although that fruity verbiage could have done with a spell-check: most of it’s in British English but ‘vigor’ is the American spelling… and ‘reknown’ isn’t a word in any language. Tsk.

Chapman’s guitars are not designed for cruise-ship lounge jazz – they’re mostly full-on rockers – and so we shouldn’t be surprised to find that these pedals are big on shredability and low on subtlety.

Both have self-explanatory controls for volume, gain and tone, but we’re drawn to the Marvellous Engine first because of its intriguing fourth knob, marked ‘voice’. This allows you to dial in a second clipping stage, adding a whole lot of extra sting to a tone that’s already as fiery as a Twitter debate about Brexit.

Taking the immortal ProCo RAT as a reference point, Snake Oil’s coppery contraption offers the same kind of smooth saturation; and while its frequency response is more ‘full range’ than the RAT’s, there’s a similar focus on choppy mids that makes this a great pedal for old-school metal riffing. There are usable sounds all the way up the tone control, but it never gets truly zingy… until we crank that voice knob, which adds as much presence as it does distortion.

The overdrive pedal isn’t quite so gainy and this is a far more ‘natural’ effect in terms of dynamics. Again, the important stuff is happening in the midrange, but this time there’s bags of treble on tap – in fact, our advice is to start with the tone fully off and treat it as an optional top boost. It sounds good going into a clean amp, but better into an already crunchy one, and works brilliantly in tandem with the Marvellous Engine as a thickener for solos.

There’s no great innovation going on here, but both pedals do their job with style and flexibility. And while we hope the spelling mistakes will be tidied up for the second run, there’s not much we’d change about what’s going on inside these boxes.