An amp-inspired hand-made box of heavy from Winnipeg, Canada that’s aimed squarely at the rock brethren.

Canadians have a reputation as polite people with a fondness for the quiet life. Every so often, however, an outlier is born with a thirst for making a ruckus. One such individual is Dan Trudeau whose company, Revv Amplification, has made a name for itself with an uncompromising, hand-wired, all-tube range of amplifiers. In fact, the G3 distortion pedal is directly inspired by the Purple channel on the Revv Amplification 120 and 100 amps – only this time in transistor form.

From the outset, the Revv G3 feels like a high-quality unit. The elegant metallic purple case, top-mounted jacks, smooth knobs and laser-etched labelling all suggest care and thought have gone into this pedal.

The control layout is intuitive enough with the EQ knobs on the top row and volume and gain underneath. Like on the Revv amps there is also a three-way Aggression switch bearing the legends blue, red and off.

Given that Revv amps have found favour with rock and metal players, we approach the G3 with a variety of guitars – laden with everything from Strat single-coils to P-90s, PAFs and EMGs – to put it through its paces. 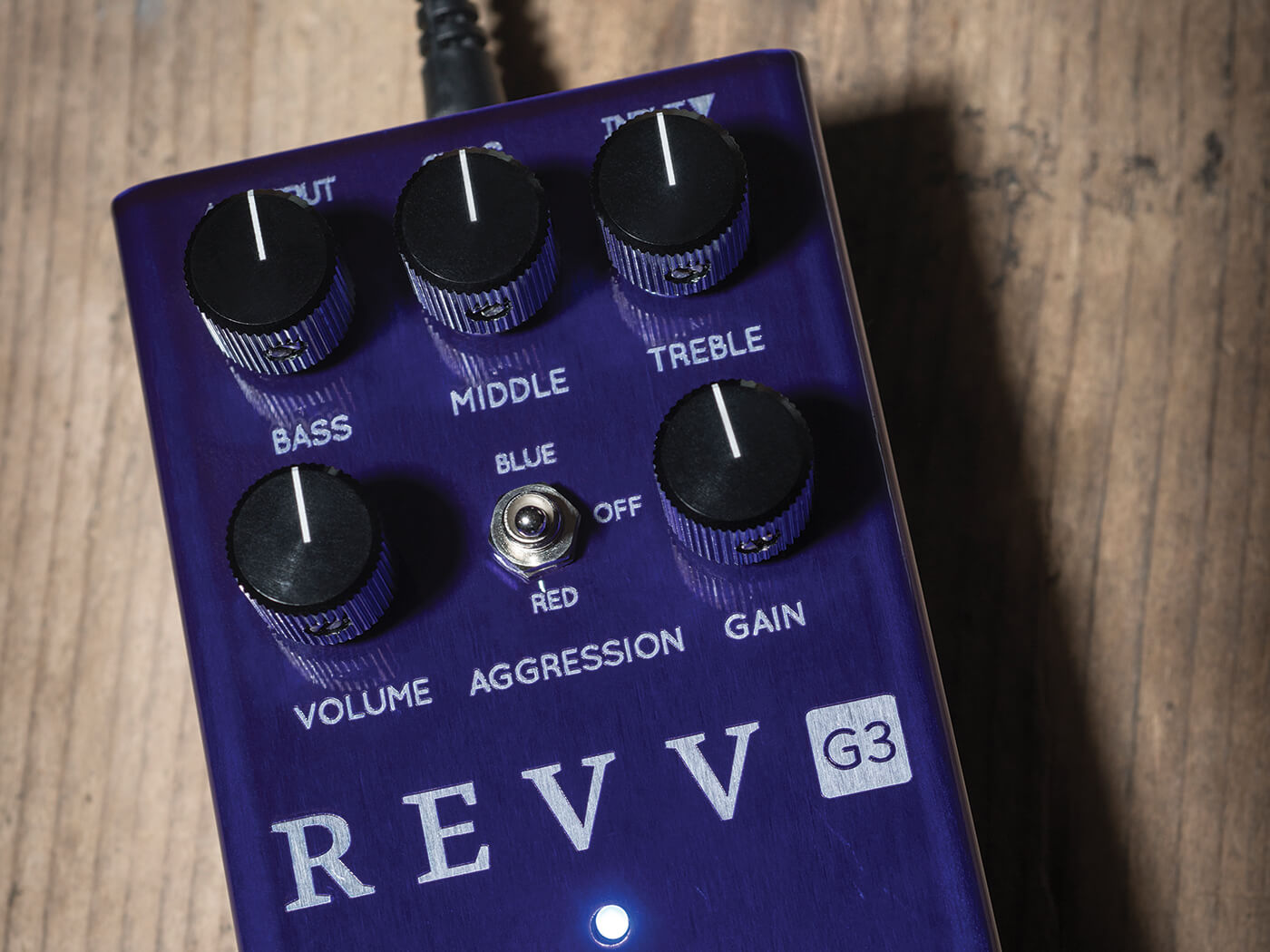 With all the controls set to 12 o’clock and the aggression switch disengaged we are greeted by an extremely impressive heavy rhythm sound that brings out every palm-muted nuance with an exceptional response and clear attack. This initial setting alone covers a variety of bases with ease, from Van Halen and Jake E. Lee to early Tom Morello. As we dial up the gain, the pedal retains its inherent character with no discernible loss of impact or attack and the EQ controls prove themselves very responsive throughout.

Flicking the aforementioned Aggression switch to Blue changes the character of the distortion to a more open, throaty roar. It’s a fantastically heavy, present sound which would seem pretty tough to match. Until we flick the switch to red… Acknowledging and allowing for the subjectivity of taste, to this reviewer’s ears and fingers this is an exhilaratingly good metal sound. Aggressive, immediate, heavy as hell… but never fizzy. As we explore down-tuned riffs from Lamb Of God and Opeth to Dimmu Borgir and Mastodon, we are rewarded with a sound that does it all, with very little knob-tweaking needed.

It can be genuinely inspiring to find a pedal that takes whatever you can throw at it. The Revv G3 does exactly that without sacrificing clarity or aggression. Dan Trudeau himself has said that 16 revisions went into this pedal’s voicing. That hard work paid off. It is a testament to the G3’s versatility that no matter what brand of rawk you hit it with, it handles it in a musical manner that encourages you to just play. 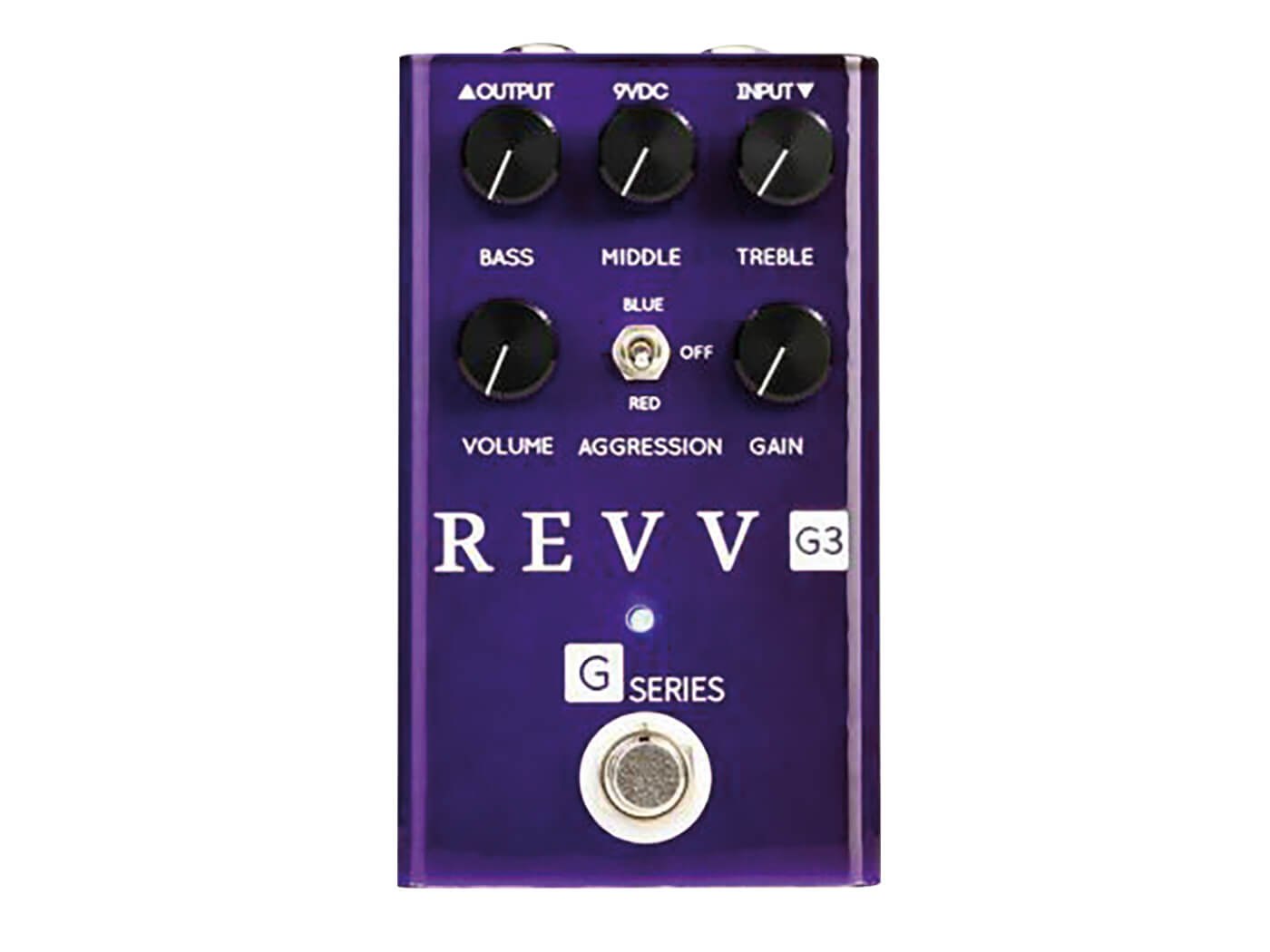