What do you get if you cross two shape-shifting analogue tremolo circuits with one fiendish digital brain? 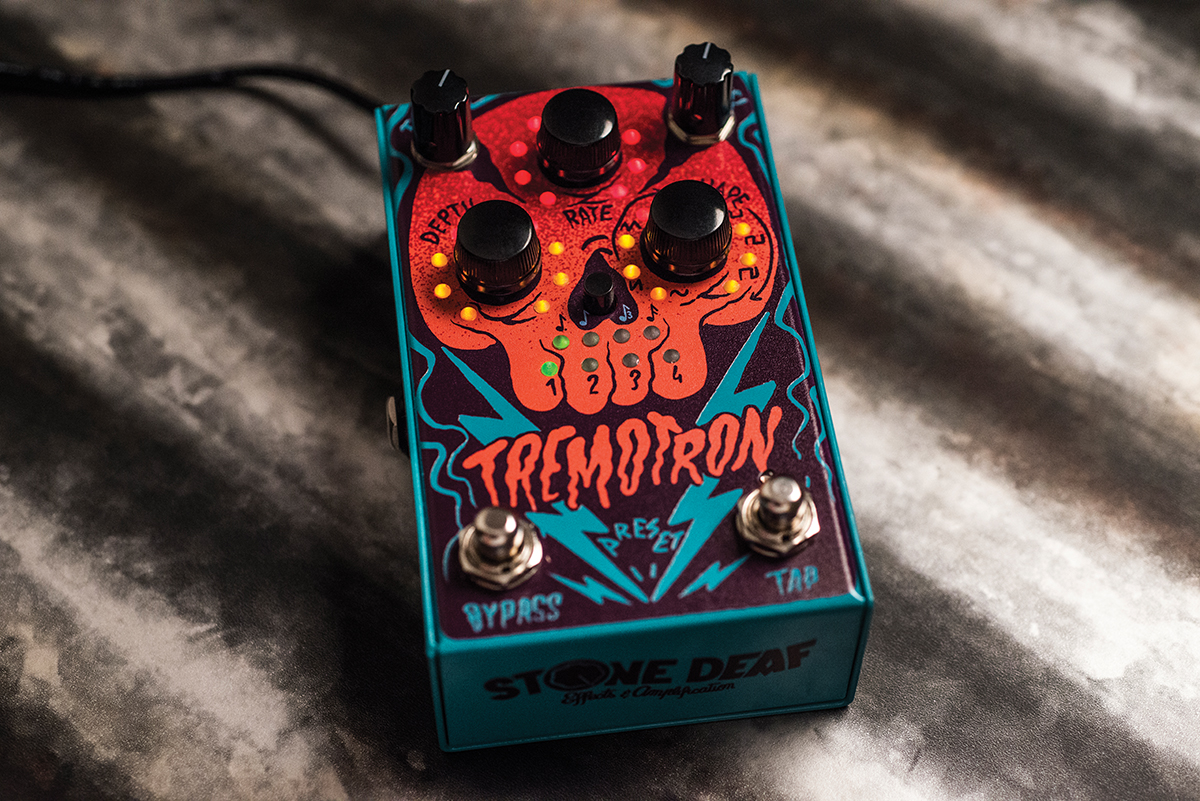 Someone at Stone Deaf was sitting on the dock of the bay, watching the tide of the Rochdale Canal roll away, when a thought appeared. ‘We make wild analogue pedals, and we make valve amps with clever digital controls,’ went the thought. ‘Why not make wild analogue pedals with clever digital controls?’. The thought was a good one, and it brought us here today – to the Tremotron.

Like all Stone Deaf pedals, this has a purely analogue signal path, but the addition of digital control has opened up all sorts of sonic options – most notably, the ability to have two completely different VCA-based tremolo effects going on at once, synchronised perfectly at the ratio of your choice.

You also get total control over wave shapes (there are nine to choose from, plus six ‘half and half’ settings), switchable presets and the option of changing multiple parameters simultaneously with an expression pedal. There’s MIDI stuff too, but we can feel our brains beginning to panic already – let’s get playing.

Stone Deaf Tremotron in use

So, how can a box with five knobs and one button do all that? The secret of the Tremotron’s user interface is in the LEDs, which show one circuit’s settings in green and the other’s in red. To switch, you just give the knob in question a firm press. It is potentially confusing, but you should get the hang of it soon enough – and the four main presets, accessed by pressing both footswitches at once, are always there to pull you out of the swamp.

We’d best be sensible, at least for a minute, and turn the second circuit to zero depth so we can check out the first one as a conventional single tremolo. Well, maybe ‘conventional’ isn’t quite the word – the shape control covers every conceivable variant of rounded, triangular and square waves, and allows you to dial in trem effects as smooth, jerky, stabby or woozy as you like.

They all sound bang-on, and the volume control can give a considerable boost to level up the more gappy wave shapes.

Now, you’d best remove any easily startled pets from the house before bringing in the second circuit. It’s easy to land on something spectacularly ugly with both effects set fast – there are many flavours of ring modulation available here – but with some judicious tweaking the Tremotron begins to show its real power.

You can imagine the wild, disorientating soundscapes that a pair of synchronised tremolos on different waveshapes will throw up, especially when placed after a high-gain fuzzbox… Well, we hope you can, because it’s chuffin’ impossible to describe them in words.

But try this: one trem producing a slow pulse, the other set super-fast but shallow to create a grainy texture that’s reminiscent of an old analogue synth.

Adding an expression pedal only multiplies the possibilities – spinning in and out of ring modulation can sound ridiculously cool – and there’s one more secret weapon to unsheath: the tone control. Turn it down from fully open and you’re engaging a powerful low-pass filter that, as long as you have a spare hand to manipulate, makes things even more synth-like. 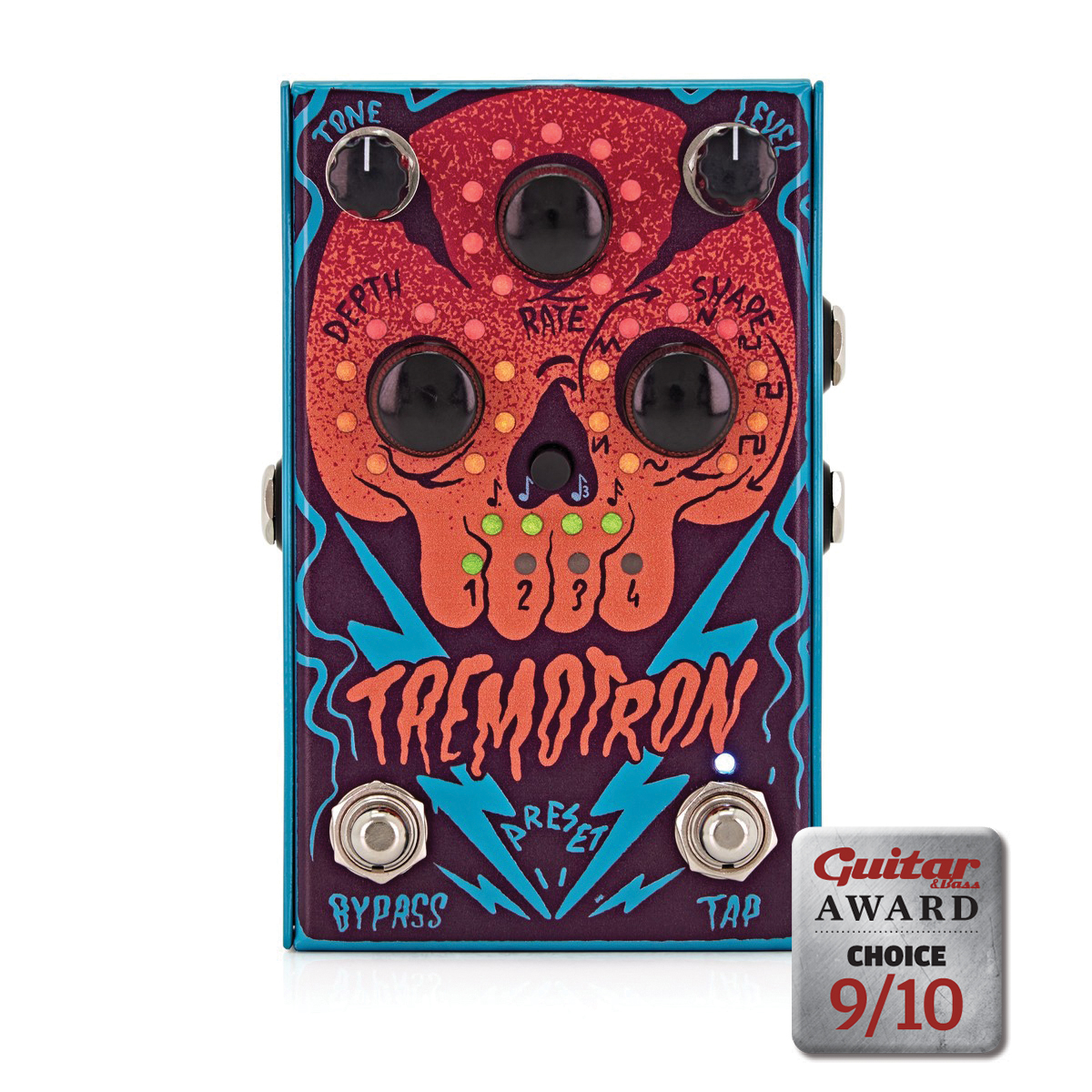 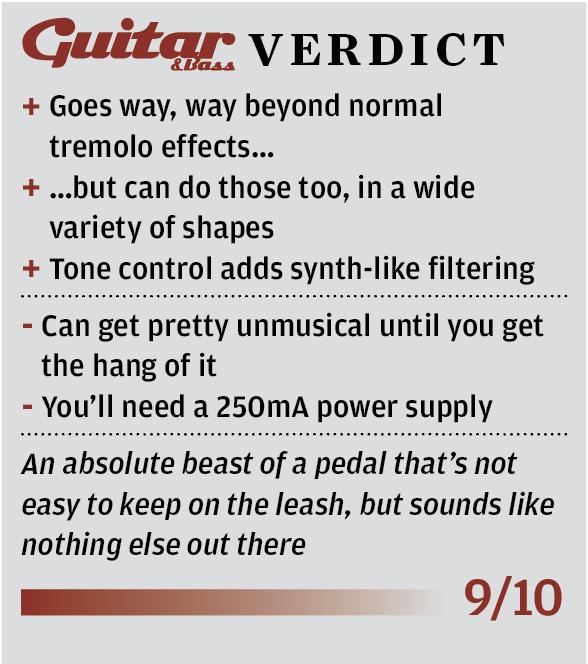