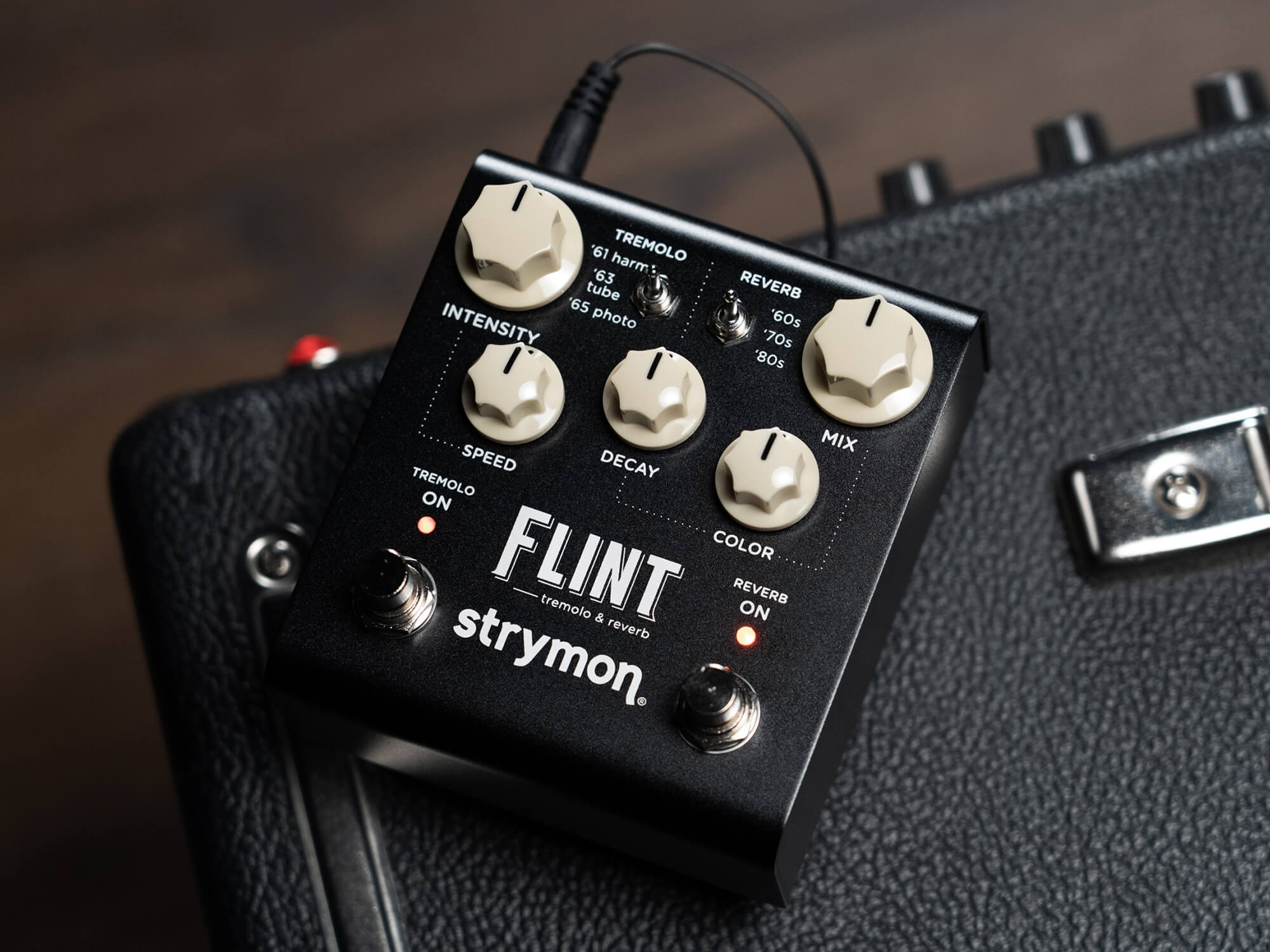 After 10 years as the go-to tremolo/reverb pedal for many, this new V2 edition of the Flint promises lots of MIDI wizardry, but is there anything here for those of us who don’t wanna get connected?

An iterative update that keeps the wonderfully authentic sounds that made the Flint a star and adds on a wealth of MIDI-enabled control options.


There is perhaps no finer combination of effects than reverb and tremolo – there’s a reason so many amp makers built the two right into the circuit back in the days before pedals brought studio effects to live settings in a much more convenient way. And artists certainly thought so too – whether you’re crafting a bleak Western soundscape or an indie-rock squall of sound, melding the undulating wobble of tremolo and the ethereal chime of reverb has proved fertile ground for countless guitarists over the decades.

All of which perhaps explains why the original Strymon Flint has proved such a mainstay for so many guitarists since it first appeared a decade ago. For many of us tremolo is a ‘nice to have’ but sometimes hard to justify on a smaller pedalboard – but everybody needs a nice lush reverb pedal, so the Flint’s ability to combine the two in one package was a home run for many.

All of which brings us to 2023 and the V2 version of the Flint, which has been revamped alongside the previously reviewed BlueSky and a wealth of other Strymon MIDI pedals to take advantage of various technological advances in the world of high-end DSP audio in recent years. Unlike the BlueSky which saw various algorithmic and control changes on the V2, the Flint’s enhancements are more subtle and iterative. Like the rest of the V2 range the most notable enhancements are an all-new premium analog JFET input circuit, cutting edge ARM-based processing, and full MIDI integration that offers 300 storable presets and a wealth of new control options. Let’s see if this Flint still has that spark… 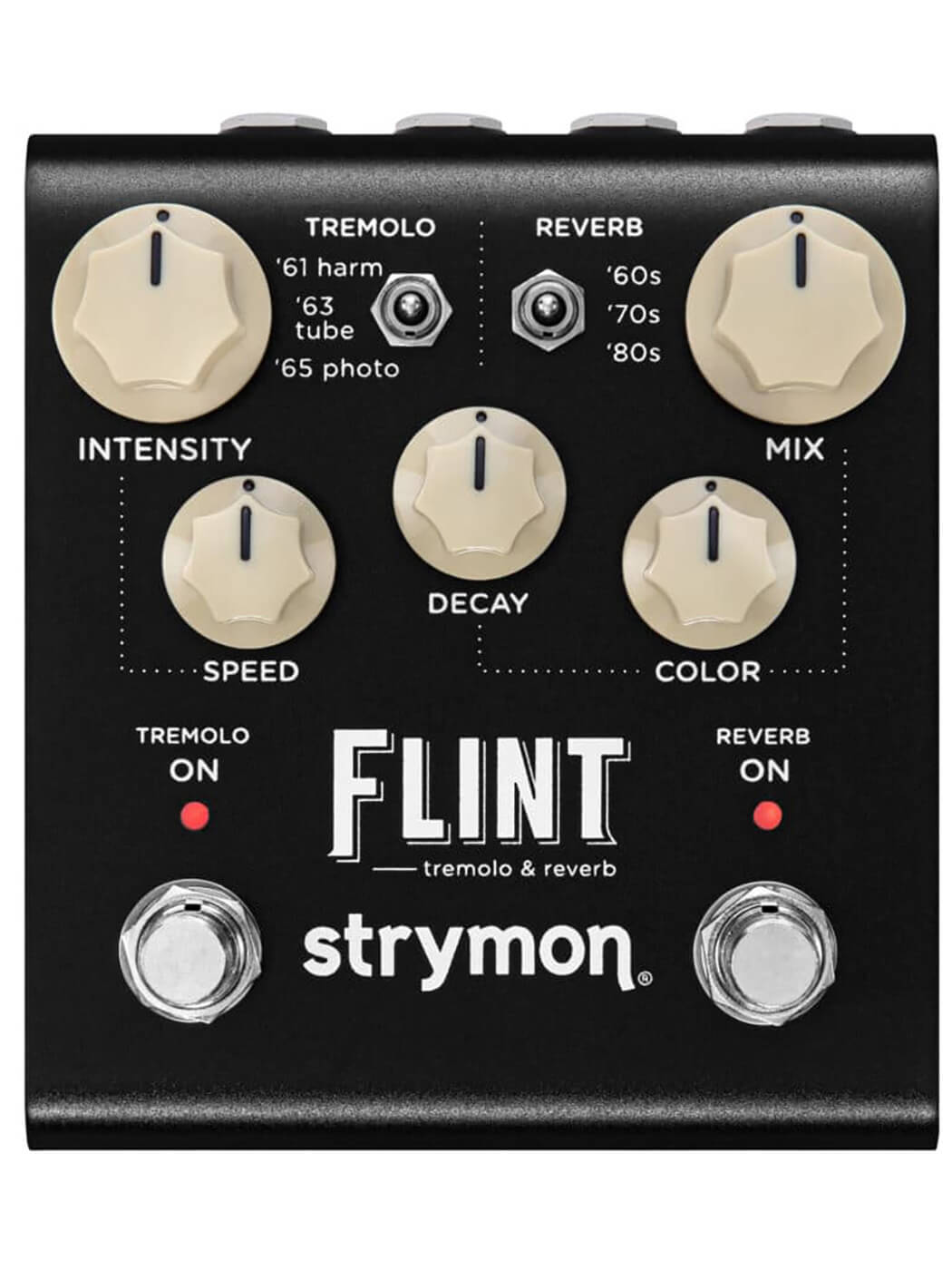 It’s worth noting right at the top that Strymon claims to have done nothing with the core sounds of the original Flint, so that means once again we get the choice of ’61 Harmonic Tremolo, ’63 Power Tube Tremolo, and ’65 Photocell Tremolo on the trem side. On the reverb side we’re still choosing from a classic 60s Spring Tank Reverb, a 70s Electronic Plate Reverb, and gloriously over the top 80s Hall Rack Reverb.

As before, there’s a wonderfully organic quality to these digital recreations, especially on the tremolo side, with the sloshy, warbly ’61 Harmonic Trem a particular standout. This is aided by the one tweak Strymon has made to the basic controls – the speed knob’s range has been expanded allowing you to slow your repeats down to a lost-weekend-level 1Hz: strap in man. There’s also been a small tweak to the reverb side, which can be found via the pedal’s Live Edit mode. Holding down one or both of the footswitches enables you to tweak various parameters including the effect order, bypass mode, a +/- 3dB boost to each effect, and new for 2023, the ability to tweak the amount of pre-delay on your reverb. 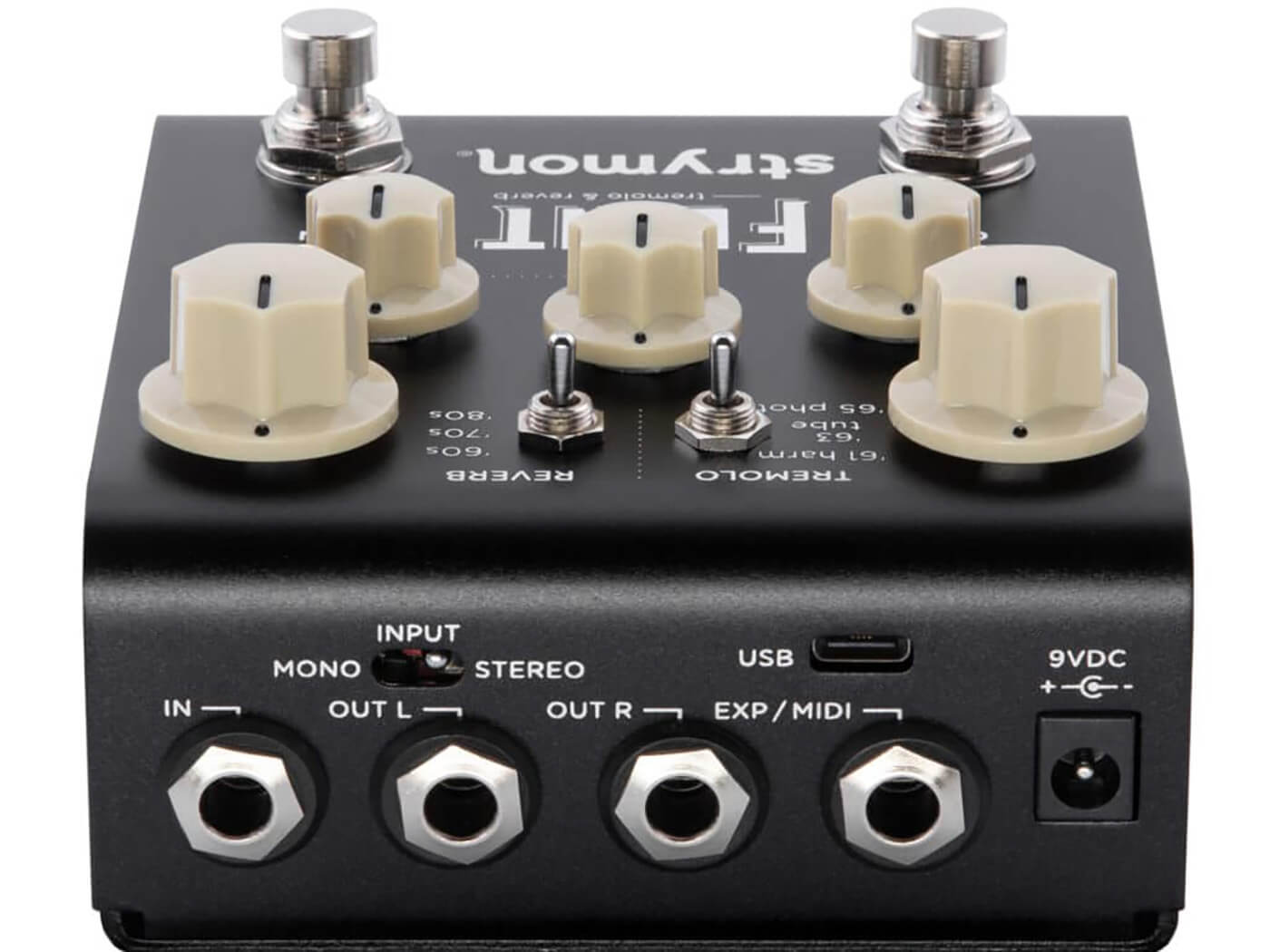 In practice tweaking this is subtle, but useful, and the same can be said of the overall sound. Strymon might not have tweaked the algorithms at all on this V2 but there’s a subtle but undeniable sweetness to the tones here compared to the darker V1 – we wonder if the new JFET input circuit is contributing to that?

Beyond these subtle changes however, the major upgrades for the V2 will be of interest to those who want to use their pedal in stereo and with MIDI and expression control. You can control any of the pedal’s parameters using a MIDI expression pedal or from your DAW with the new USB-C output, you can sync the tremolo to the MIDI clock, you can hook it up to an external switch to enable recalling of favourites or tap tempo… there are a wealth of control, preset and function options that can be tweaked and controlled in real time depending on how shallow or deep your MIDI interest goes.

And that, ultimately, is the killer question for prospective buyers of the Strymon Flint V2; do you want or need all that? For some players, the power the V2 has under the hood will unlock whole new worlds of sonic bliss, for the rest of us however the benefits are less clear cut. If you don’t own a Flint, there’s no reason not to pull the trigger on the V2 as it’s still a wonderfully organic and musical tremolo/reverb pedal and it gives you a wealth of options to utilise should you need them… if you own a V1 however, unless you’ve been pining for some MIDI control of your Flint, there’s no reason to upgrade. 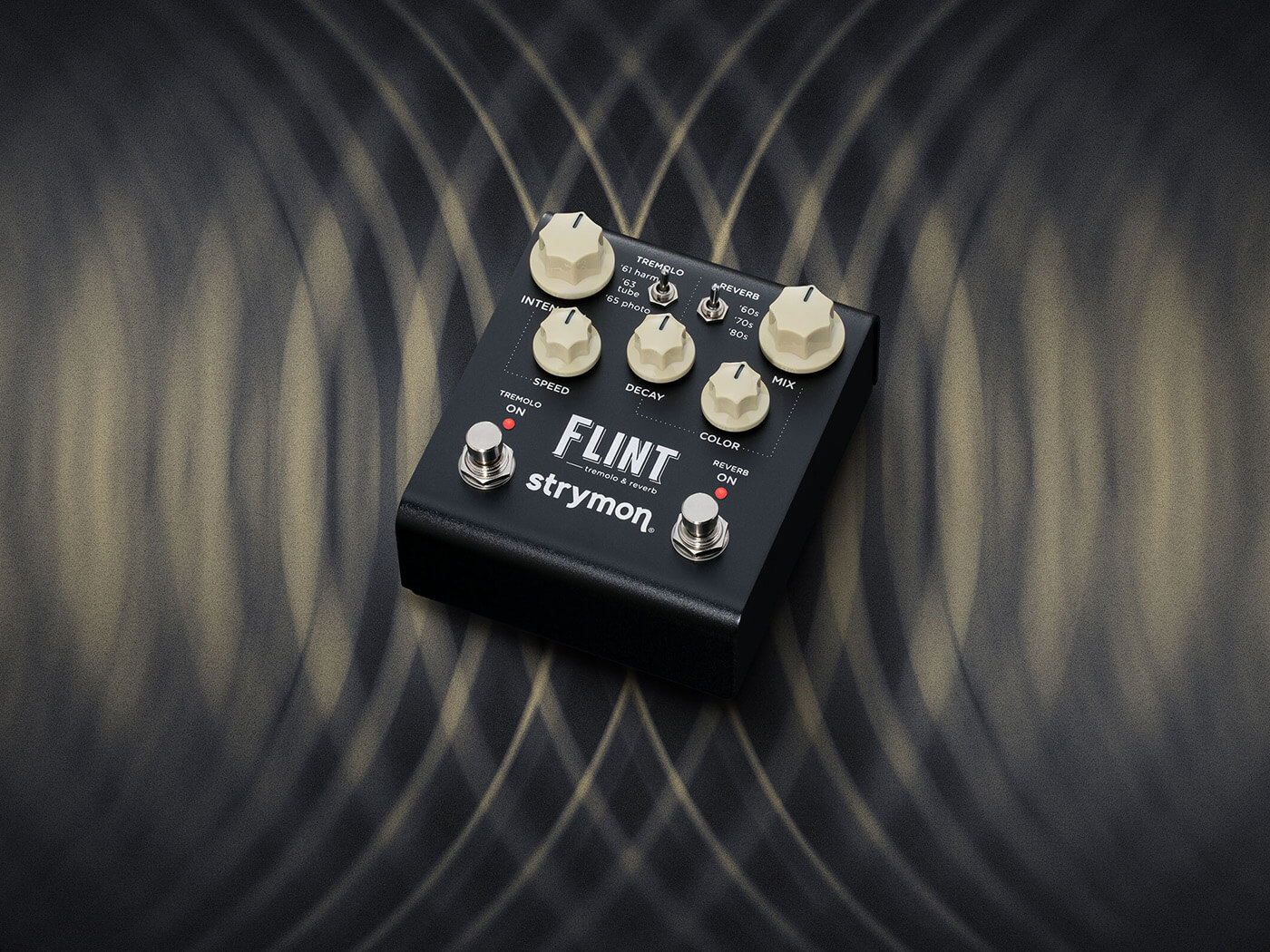