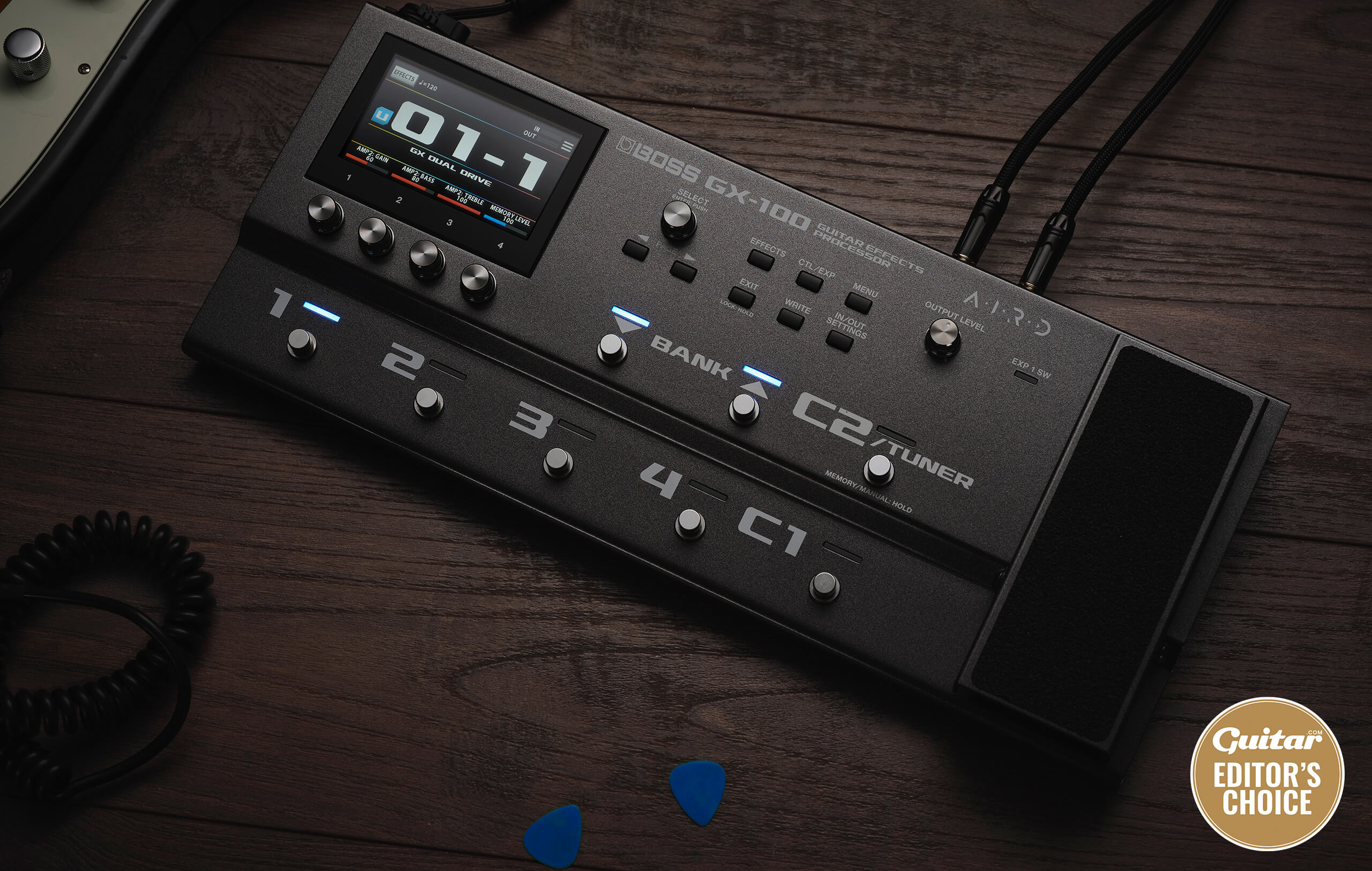 The Big Review: Boss GX-100 review – is this touchscreen-toting unit the most user-friendly multi-effects ever?

Boss is hardly a newcomer to digital multi-effects processors with amp simulation. But it is new to touchscreen control. Does the GX-100 let you swipe your way to tone heaven?

Did you know that the first touchscreen was developed in the 1940s? We’re not sure what they used it for – Angry Birds hadn’t been invented yet – but it’s certainly taken a long time for that tech to filter down to the world of guitar.

There have been multi-effects processors with touchscreens on the market for a while now. But it’s only when an idea turns up on a Boss unit that you know it’s gone properly mainstream – and that’s what’s happened with the GX-100. Yes, Boss’s latest portable cornucopia of digital effects and amplifier sims is full-on touchy-feely. 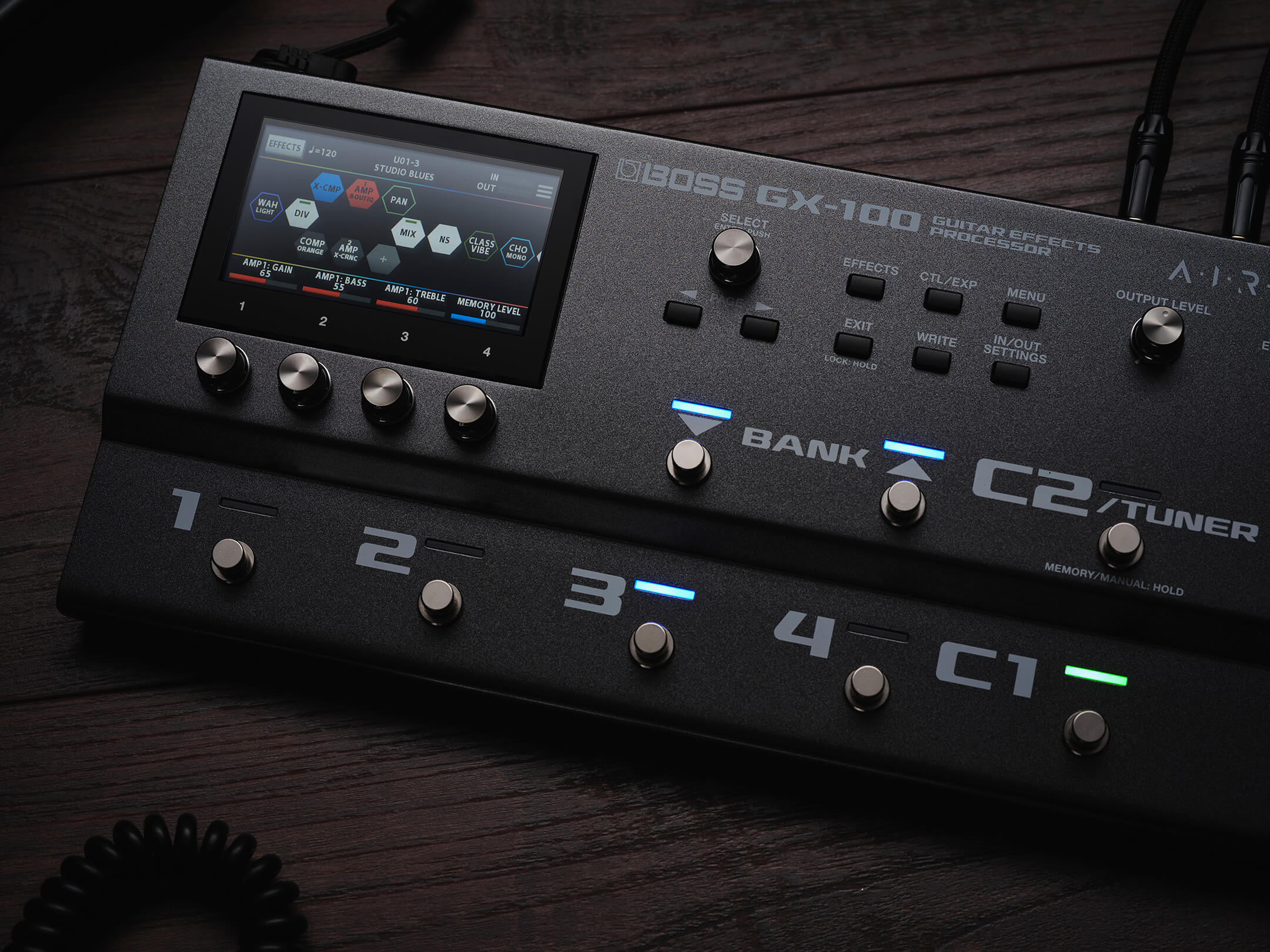 Most of the headline specs here are straightforward enough. This is a reasonably compact floor-based processor with 154 effects and 23 amps, which can be strung together in any combination of up to 15 modules. It comes with 100 factory presets, plus 200 free slots for storing your own. There’s an assignable expression pedal, a looper and a tuner, and USB connectivity to make use of Boss’s fine Tone Studio desktop editing software.

Given how much cheaper this unit is than the flagship GT-1000, you might be sold on it already. But what truly sets the GX-100 apart from Boss’s GT devices is its full-colour LCD touchscreen, which grants users a more intuitive way to navigate signal chains and settings than twiddling and scrolling with knobs and buttons. 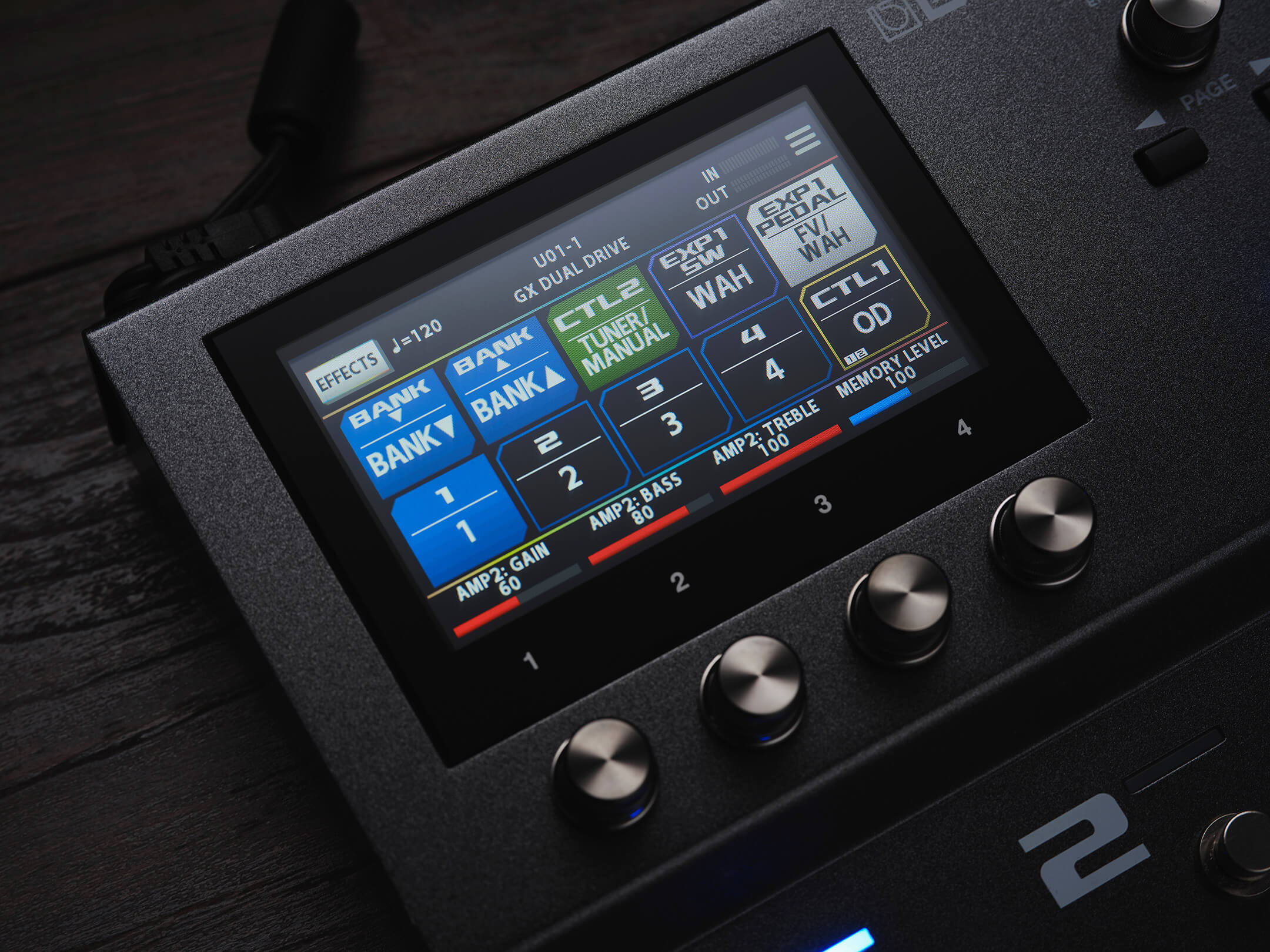 It’s not the biggest or the sharpest screen – at little more than four inches it’s smaller than you’ll find on the average modern smartphone – but it still feels like a significant step forward for Boss. And if that’s a bigger step than you’re ready to take, don’t worry: there are still plenty of knobs and buttons too, which replicate all those key tap/swipe functions.

There’s also a manual mode, in which all those footswitches can be assigned to turn individual effects on and off. Here, though, we’re doing most of our exploring in memory mode. Once we’ve used the up and down footswitches to select one of the 25 banks of factory presets, the numbered switches along the bottom row let us hop between the four sounds in that bank.

These aren’t just any presets either, with several of the patches having been created by popular players – so should you be inclined, you can check out sounds created by John Browne (of Monuments), Jack Gardiner and Jay Leonard J. 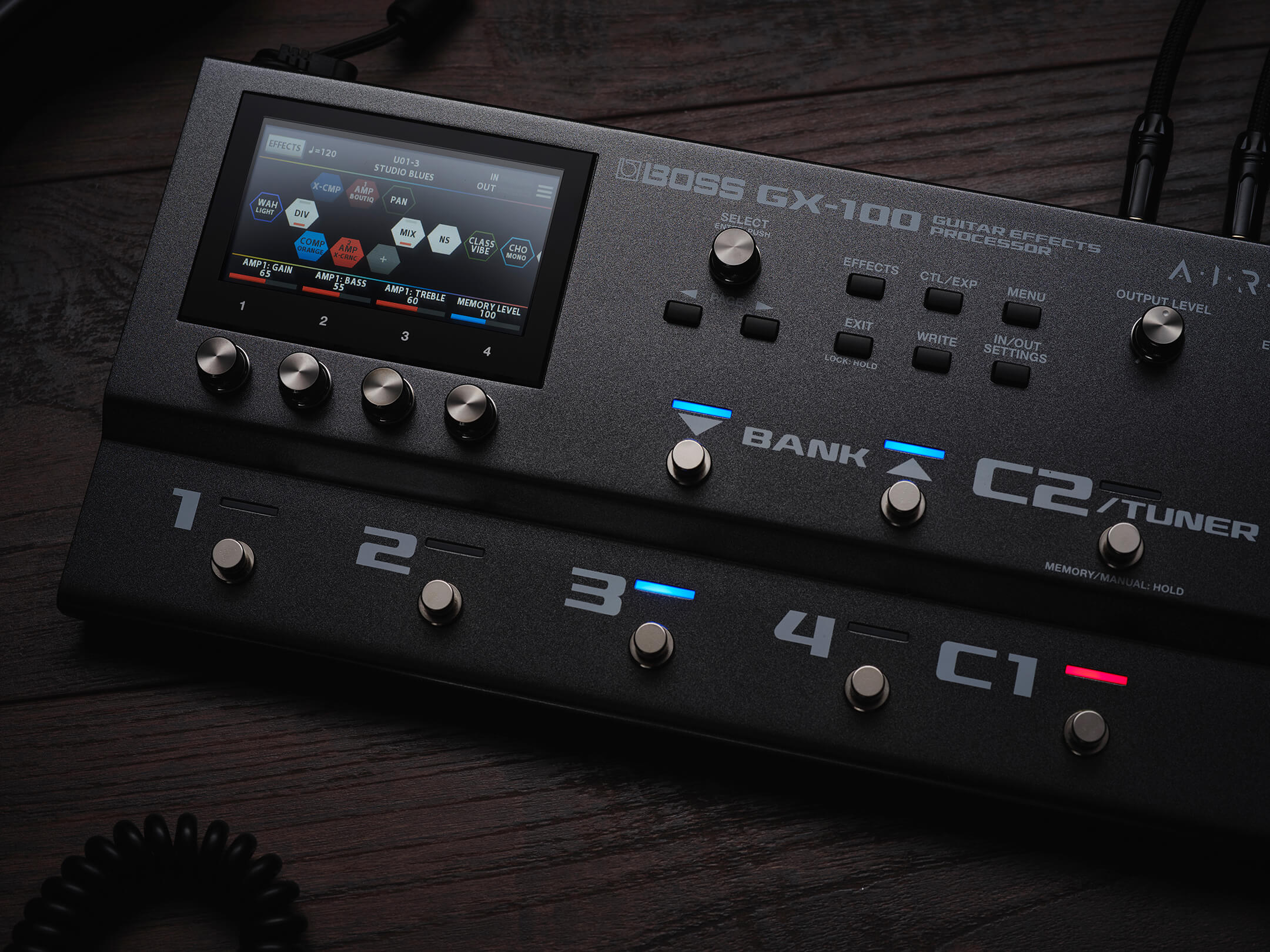 We can also use the C1 footswitch to flip between two channels and, unless we customise it for another purpose, C2 to silence the outputs and engage the tuner.

Wait, did someone say two channels? Yes, and here’s where the flexibility of the touchscreen really comes in handy. Each effect or amp is represented by a colour-coded hexagonal block, and this ‘freely assignable effects chain’ has been designed to enable us to drag and stack effects at will to sculpt new sounds. That includes such common pedalboard tricks as stacking drive pedals, or even splitting our signal in two and applying different effects and amplification to each side. Of course, we can also add more effects before and after the split, for any treatment we want applied to both channels.

If that sounds potentially confusing, imagine how hard it might be without a touchscreen.

Normally the bulk of a review like this would be taken up by describing the sounds a unit can make, but in a sense that’s not the point here – because there’s a good chance you know them already.

Though Boss has rebuilt the architecture of the GX-100 from the ground up, the tones inside it are really no different to the ones you’ll get from other current Boss processors, and if you’ve played with any before – particularly those that can use Tone Studio to access the Tone Central library – then your ears are not in for any surprises. 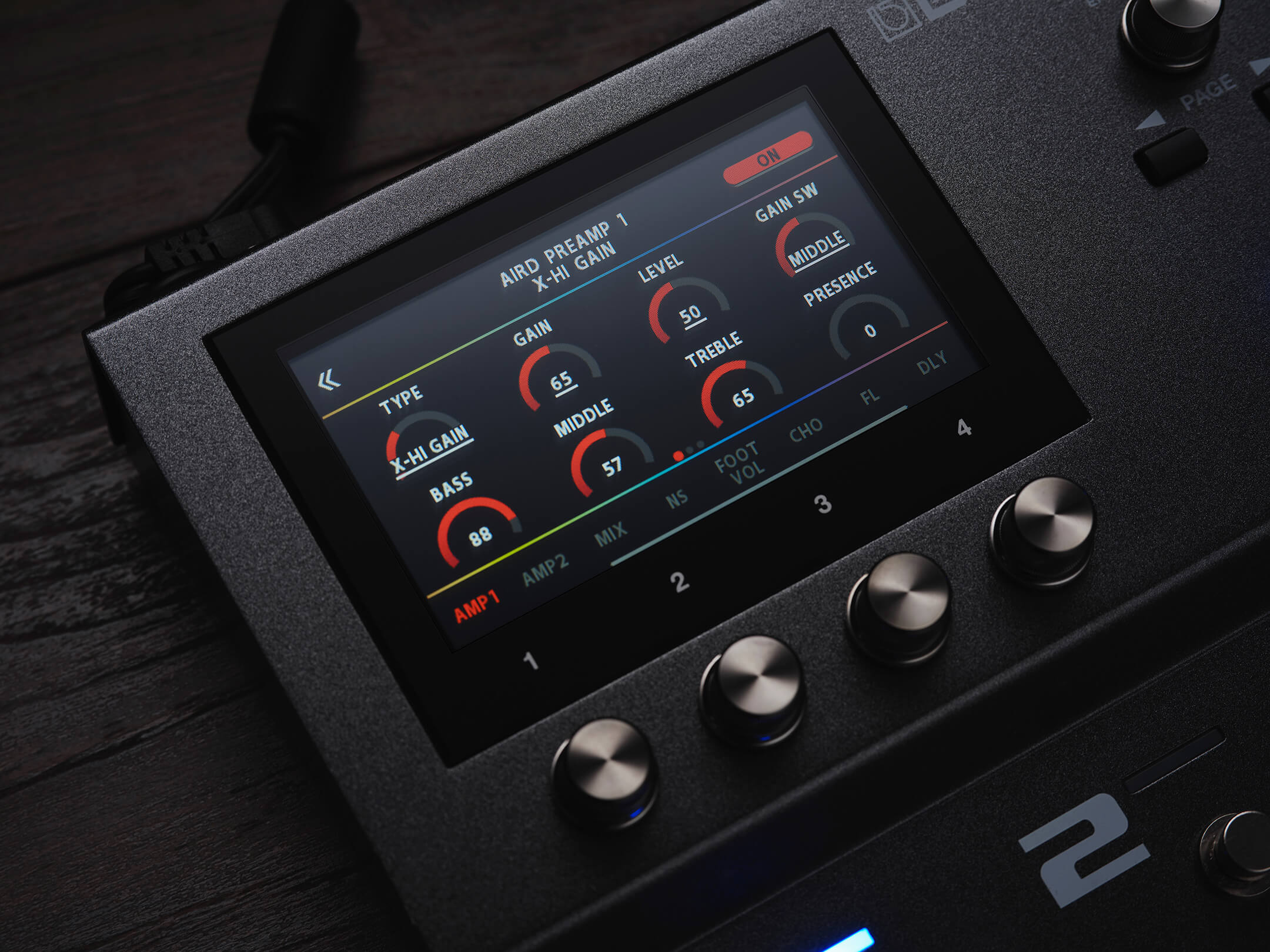 Strictly speaking, though, there is one key difference between the GX-100 and the GT-1000, which goes some way to explaining the lower price: while the latter unit offers 96kHz sampling, the former makes do with 48kHz. That’s not exactly lo-fi but if you think you’ve got the hearing powers to notice, it’s something to keep in mind. (The GT-1000 also has more footswitches, and 500 preset slots.)

We start by toe-tapping our way through the 100 factory presets. The first thing we notice is that all of them include amplifier simulation – clearly Boss is thinking about the GX-100 more as a device to facilitate amp-free gigging and direct recording than as a simple multi-effects unit. 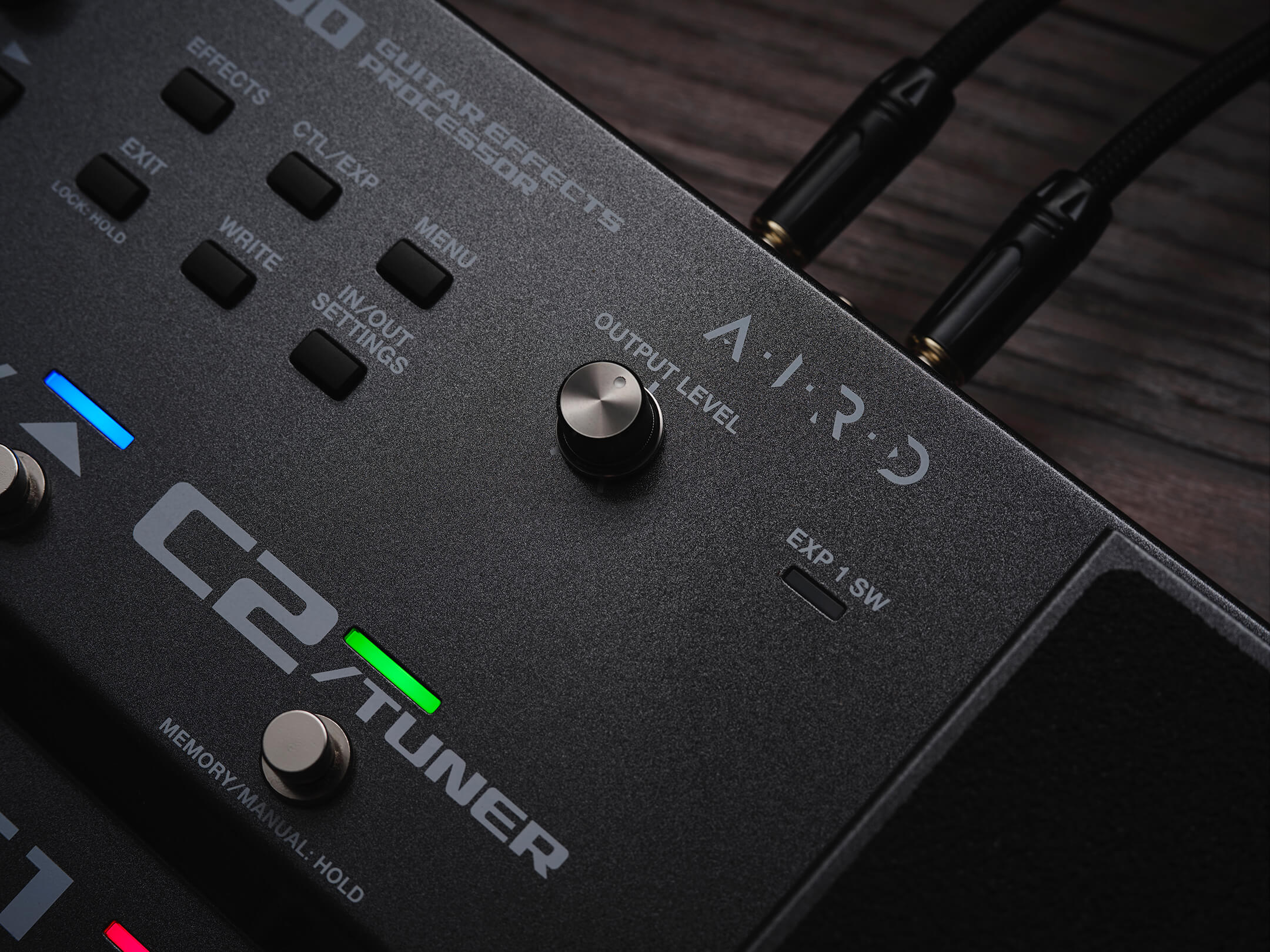 For the record, switching the virtual amps off and going into a real one yields excellent results. But our default setup for this review is running straight into a recording interface and listening over the studio monitors.

This being a digital processor, we’re not too surprised that most of the show-offy presets sound, well, digitally processed. Nevertheless, the range of tones on offer is huge, taking in every genre you could possibly wish to attack with a guitar or bass. And if you want to hear something more stripped-back, simply tap once on an effect module to select it and once more to bypass. So long, cheesy 1980s chorus and delay! 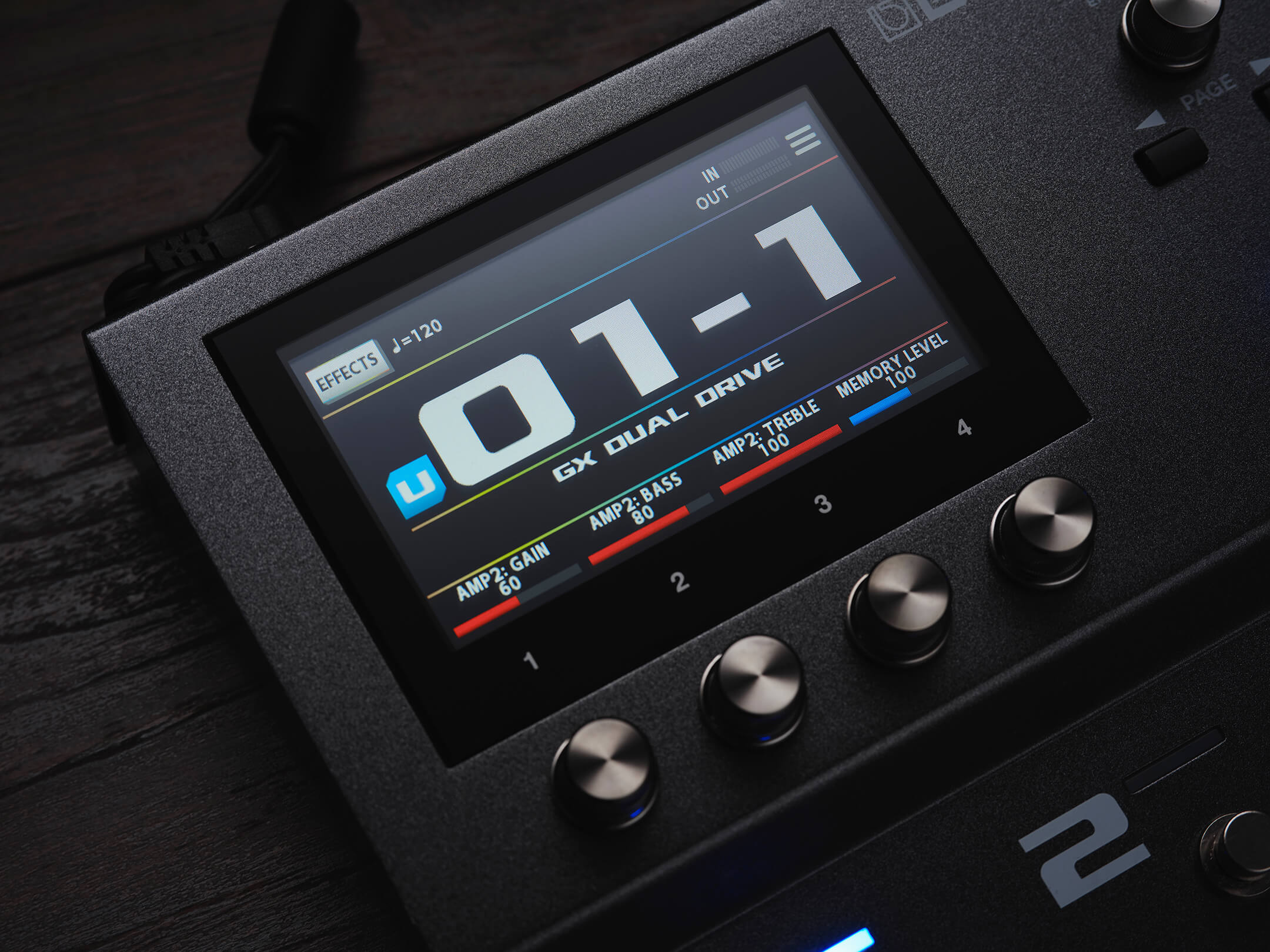 Boss’s latest virtual amps use AIRD (Augmented Impulse Response Dynamics) and – in a nutshell – sound fantastic. Everything from high-gain metal heads to crunchy Brit combos is represented, and the touchscreen makes it easy to carry out tonal adjustments or, say, flip from a booming 4×12 cab to a tight 1×10. Setting up two channels with totally different amp types is effortless, meaning that C1 footswitch becomes a shortcut to the kind of channel-switching that a single real amp could never manage.

Highlights among the effects palette include the rotary speaker sim, the assorted wahs and the full family of Boss delays, including a wild filtered swirl borrowed from the Tera Echo. The fuzzes and distortions do a solid job too, aided by a noise suppressor that works superbly well at clamping down on the background roar without snipping off the end of your last note – or indeed the beginning of your next one. On the subject of utilities, the full-colour clarity of that screen is good news for the tuner, which defaults to polyphonic mode if you pick multiple strings at once. 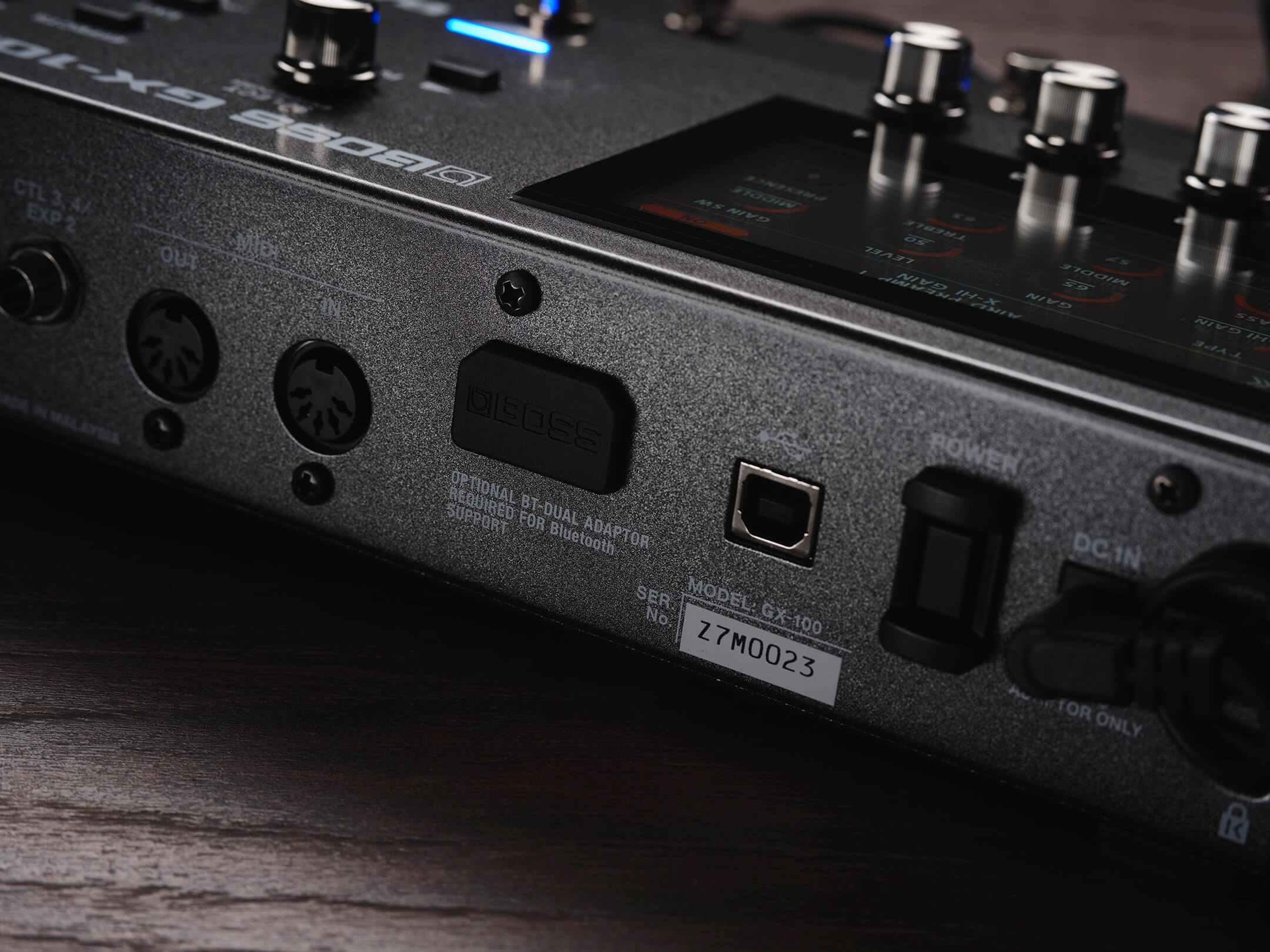 Things that aren’t so great? Well, an independent volume control for the headphone output would have been nice. It’s also not as obvious as we’d like it to be how you can play through both amp channels in a full stereo rig (you have to select the Dual mode in Divider then set it to ‘pan L/R’ in the Mixer, enabling you to output channels A and B individually).

Perhaps a proper iPad-scale touchscreen would have made navigation easier still but there may be a good reason behind this humble screen size beyond saving space and cash: it’s small enough that it’s protected from stray stomping feet by the row of four push-knobs along the bottom; anything bigger might have felt vulnerable. 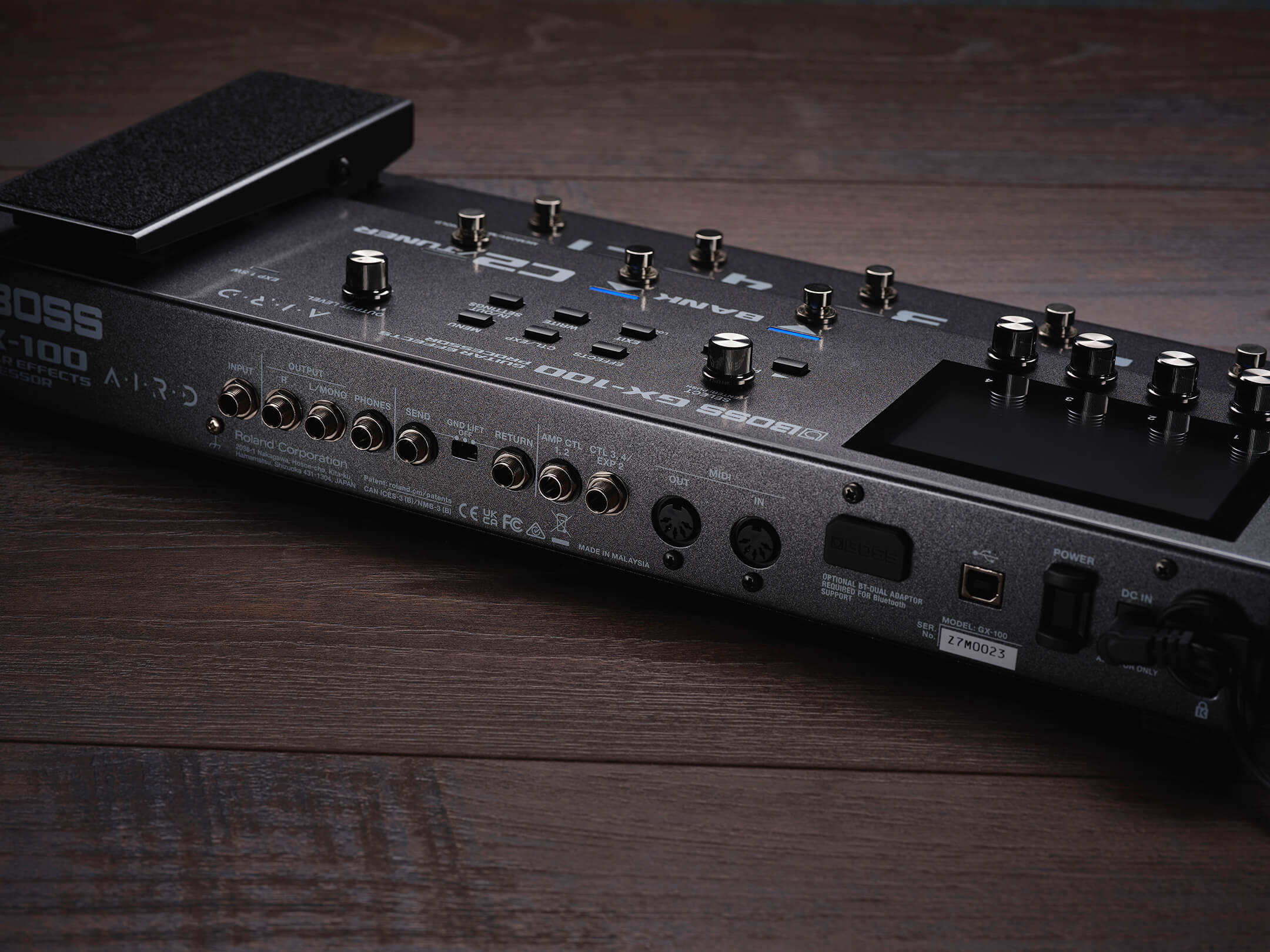 Maybe it’s too soon to say whether touchscreens on stompboxes are the future – there is still something worrying about having such a breakable component down there at the level of clumsy boots and falling mic stands. But the idea is clearly catching on. The Boss GX-100 makes it obvious why. 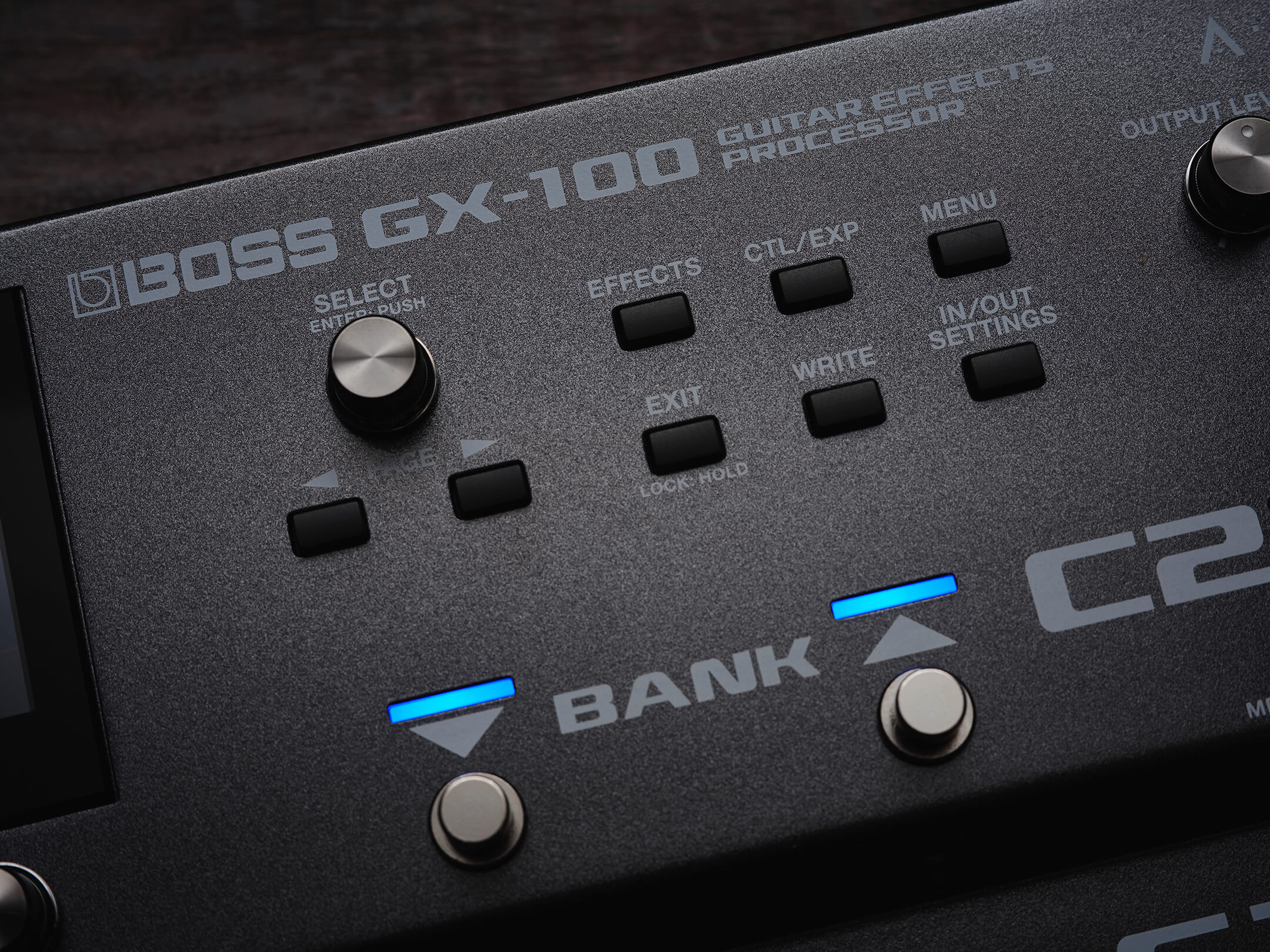