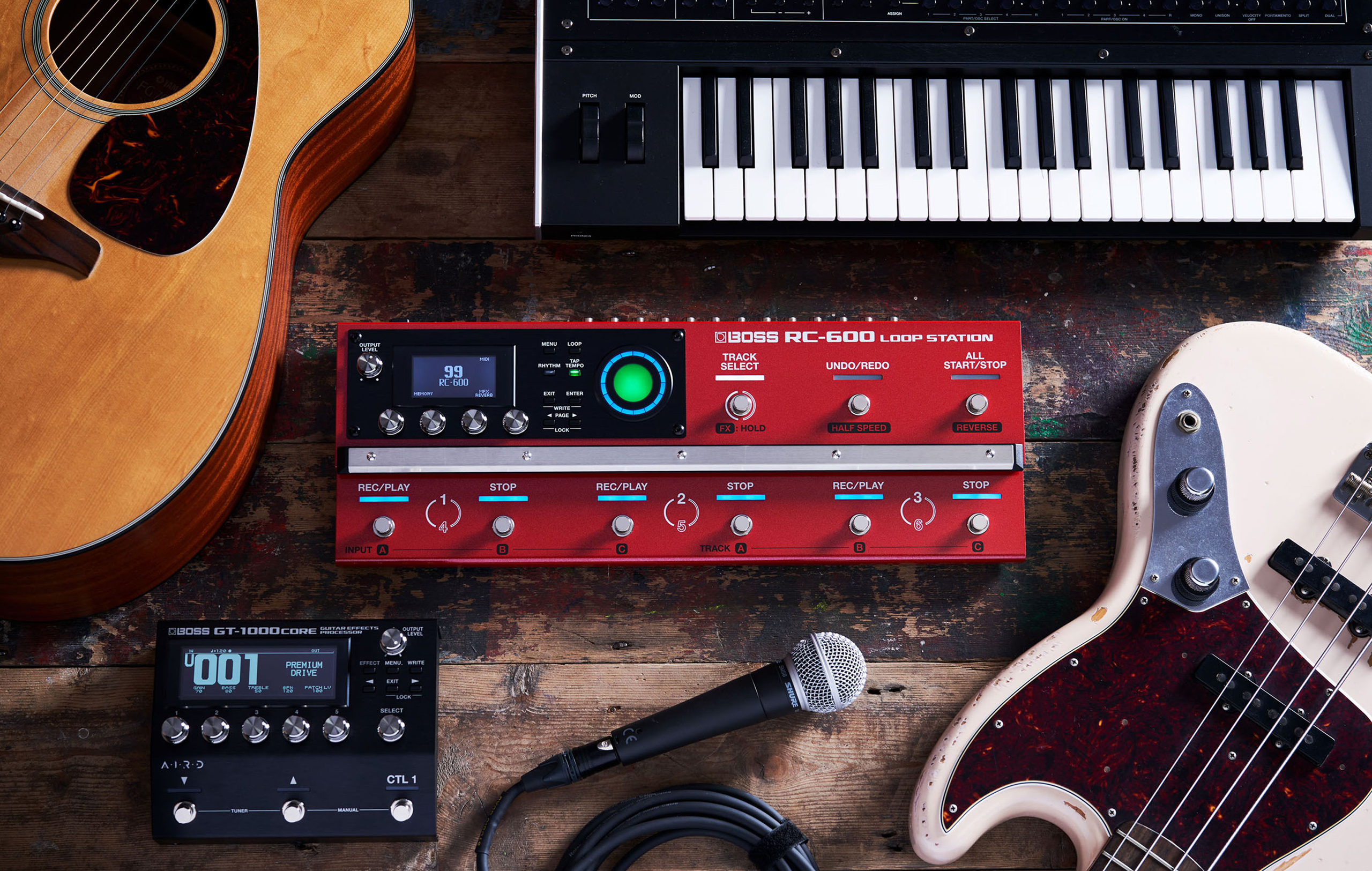 Boss has kitted out its latest top-of-the-line looper with six stereo tracks, 13 hours of storage and a full package of onboard effects. Is it time to sack the band?

A thoroughly capable looping workstation that thinks of everything but remains reasonably easy to use.

There are two approaches to designing a looper. The first is to keep it as simple as possible; the second is to go large and cram in as much functionality as the feeble human brain can handle. With the RC-600, Boss has very clearly gone for approach number two.

This latest flagship Loop Station has nine footswitches controlling up to six stereo tracks, and includes a wide range of drum patterns as well as dozens of effects. The rear panel has more sockets than a 1950s telephone switchboard… and yet this is actually a more compact device than its predecessor, the surfboard-like RC-300.

Part of that is down to dumping the onboard expression pedal – you can easily plug your own into one of those rear sockets – but a look at the comparative specs tells us that, as well as doubling the number of recording tracks, the new model bumps up the storage from three hours to around 13. Even if you use all six tracks, that’s enough for two hours of music. 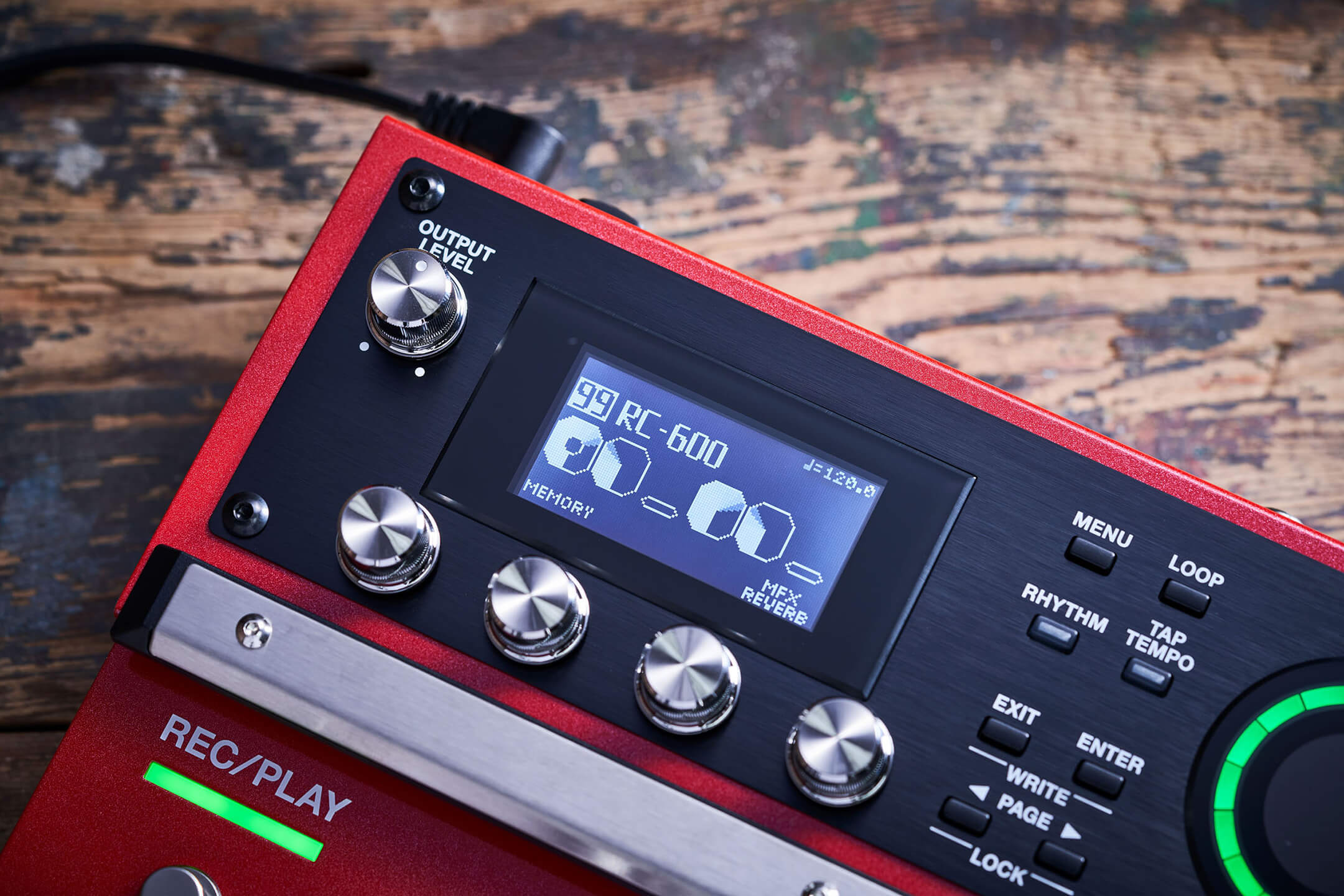 The control interface appears somewhat simplified, which is good news for that feeble brain, with assorted knobs and buttons dotted around the two main landmarks: a small monochrome LCD screen on the left and, most strikingly, a multicoloured circular light panel in the centre. This serves as a visual metronome, with 16 beat indicators around the edge and a slightly disconcerting resemblance to HAL 9000 in 2001: A Space Odyssey. Let’s hope this computer’s a little less buggy.

Four push-button dials allow you to navigate the assorted menus offered up by the main display, but it is possible to get started without even bothering with that: plug everything in, stomp on the ‘rec’ footswitch for track 1 to start recording and hit it again to stop, then once more to overdub – yes, just like those simple loopers we were talking about at the beginning.

Of course, you’re not going to drop half a grand on a giant Loop Station just to do that, even if it does promise better sound quality than most with its 44.1kHz sampling and 32-bit floating-point processing. So let’s explore the RC-600’s added skills in more depth. 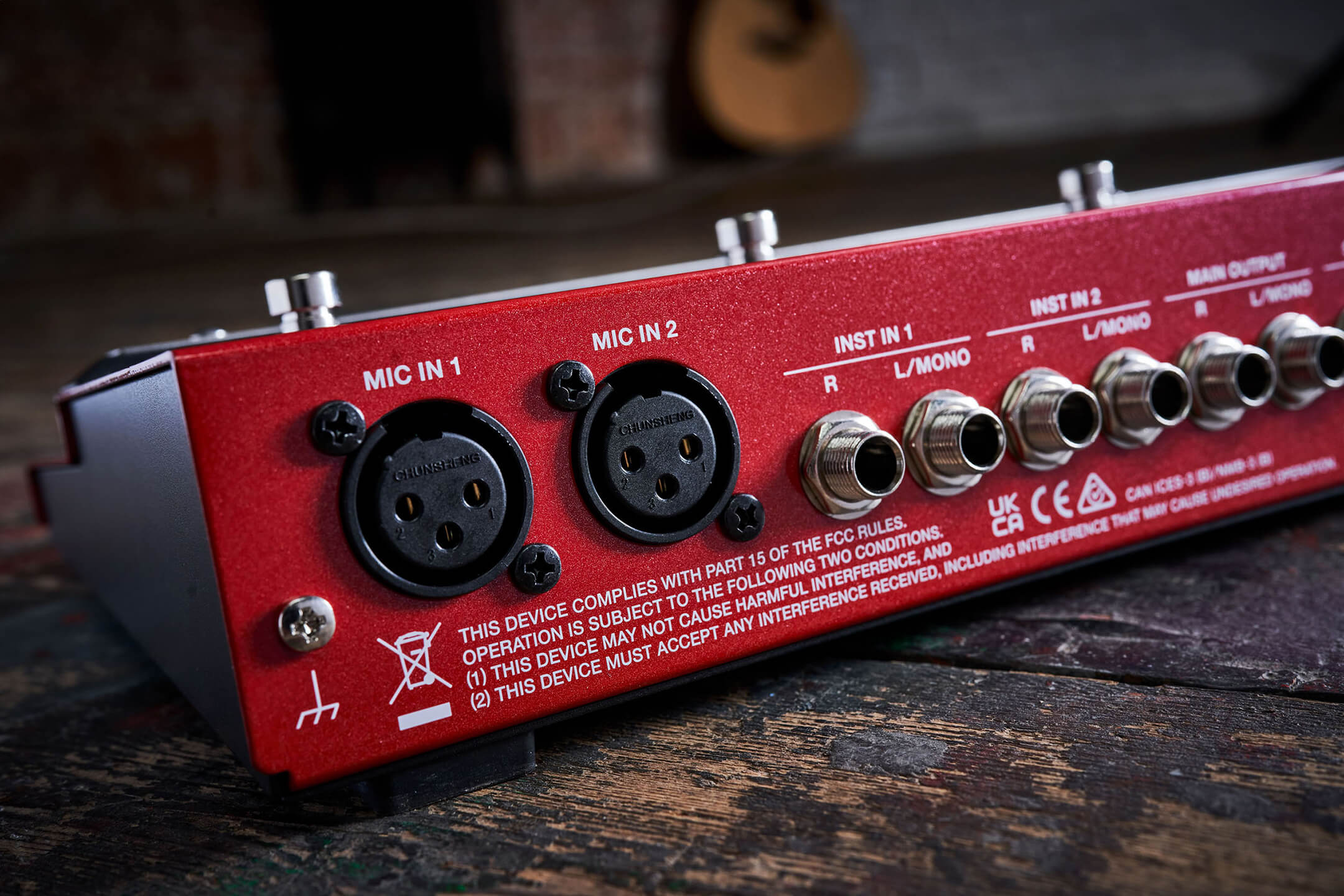 Actually, before we embark on any intrepid menu-diving adventures, we will indeed start by simply plugging and playing – and it sounds great. It’s debatable how much difference the audio specs really make when you’re running everything through a crusty old valve amp, but even listening through studio monitors there’s no obvious ‘digitising’ of the signal going on here.

And we still don’t need the LCD to take the next step: adding two more tracks is as simple as stomping on two more switches, then a toe-tap on ‘track select’ takes us instantly to the other three. Within a couple of minutes we can have six different parts to our loop, each one easily silenced or brought back into the mix with a stomp.

To add effects to the input signal, it’s just a matter of holding down ‘track select’ until the light turns blue; now all six of the lower footswitches become effect bypass switches. From the factory, our unit only has three ready to go: a fruity phaser/filter, a tempo-sync’d hard tremolo and, perhaps most usefully, an octave-down effect that serves as a handy shortcut for (don’t tell the bassist) playing basslines on a normal guitar. 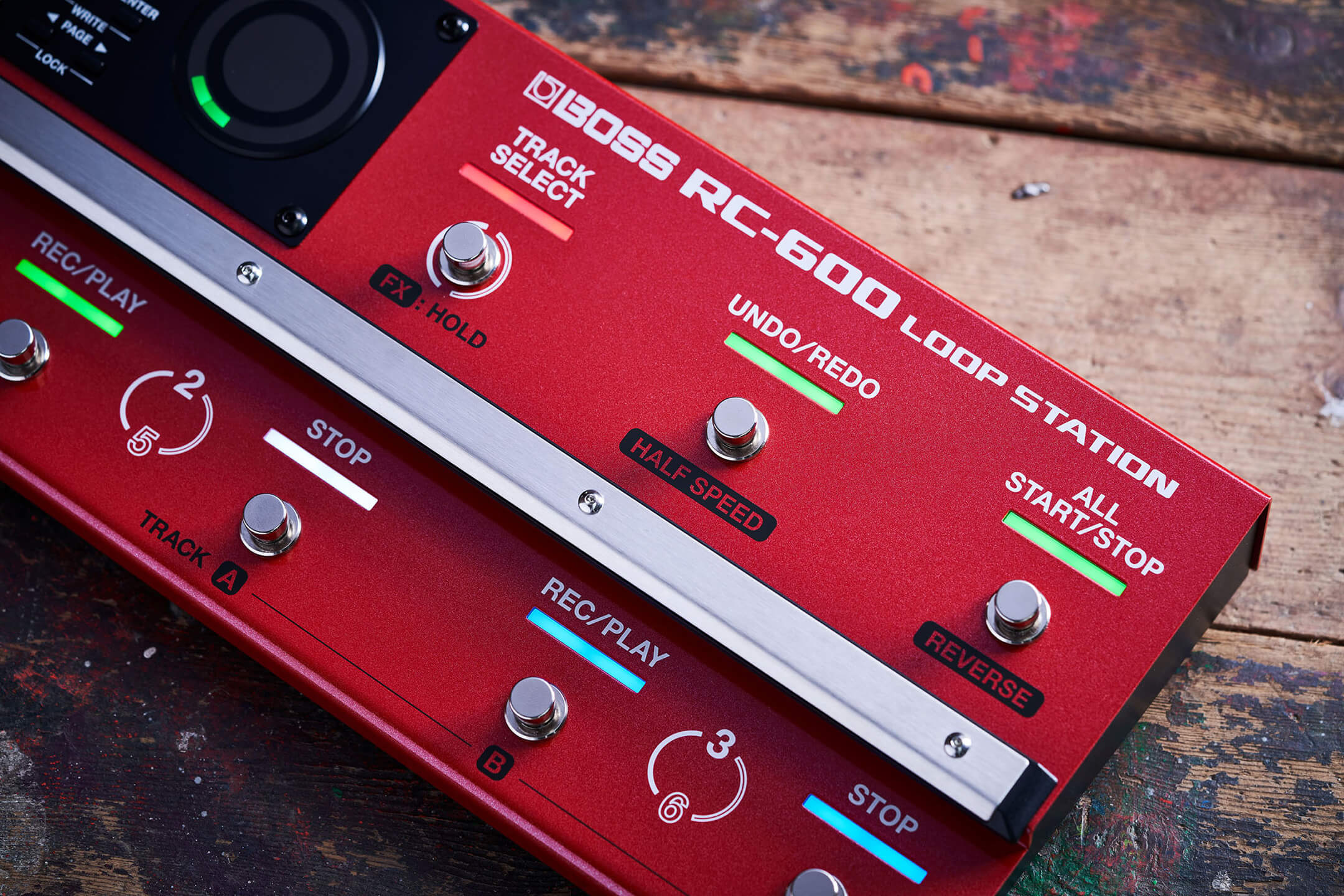 Here, then, is where we might need to jump into the menus. Luckily, assigning and editing input effects is about as easy as it could be with such a tightly condensed interface, and the array of sounds available is comprehensive. Effects can also be added to tracks after they’ve been recorded, as with a DAW.

If you’ve used up all 99 onboard memory slots and want to record your loops externally, it’s worth knowing the effects menu includes nine virtual amps. There are clean, crunchy and metallurgical models, all impressively lifelike, and you can customise everything from EQ and presence to speaker size and mic placement. 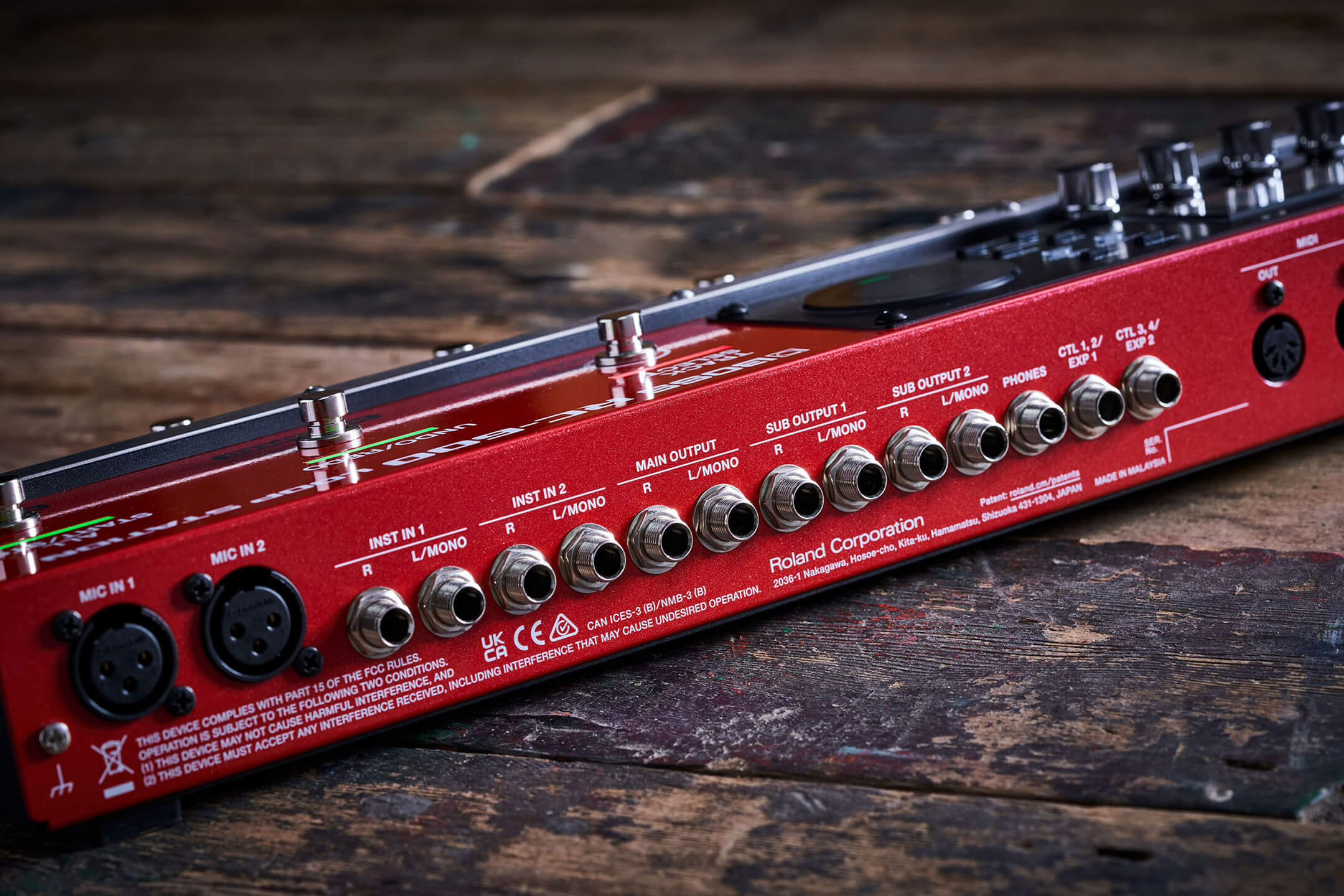 Skipping briefly over a loop-reversing mode that works really well and a half-speed function that (at least on our review sample) sounds horribly lo-fi, we come to the onboard drums. Maybe not many people will make use of the RC-600’s backing rhythms – they feel like more of a bedroom jamming/songwriting tool than anything you’d use live – but there’s a whole bunch of different kits playing a whole bunch of different patterns and the audio quality is impeccable. What’s more, fully flexible routing means you can easily assign the drums to one pair of outputs (going straight to a PA, perhaps) while the guitar tracks head off to your amp as usual.

There are more layers of functionality to explore if you dare – it’s even possible to re-assign what all the footswitches do – but the key here is that the basics are entirely accessible. Smartly designed and solidly built, the RC-600 is an insanely feature-packed looper that’s only as complicated as you want it to be. 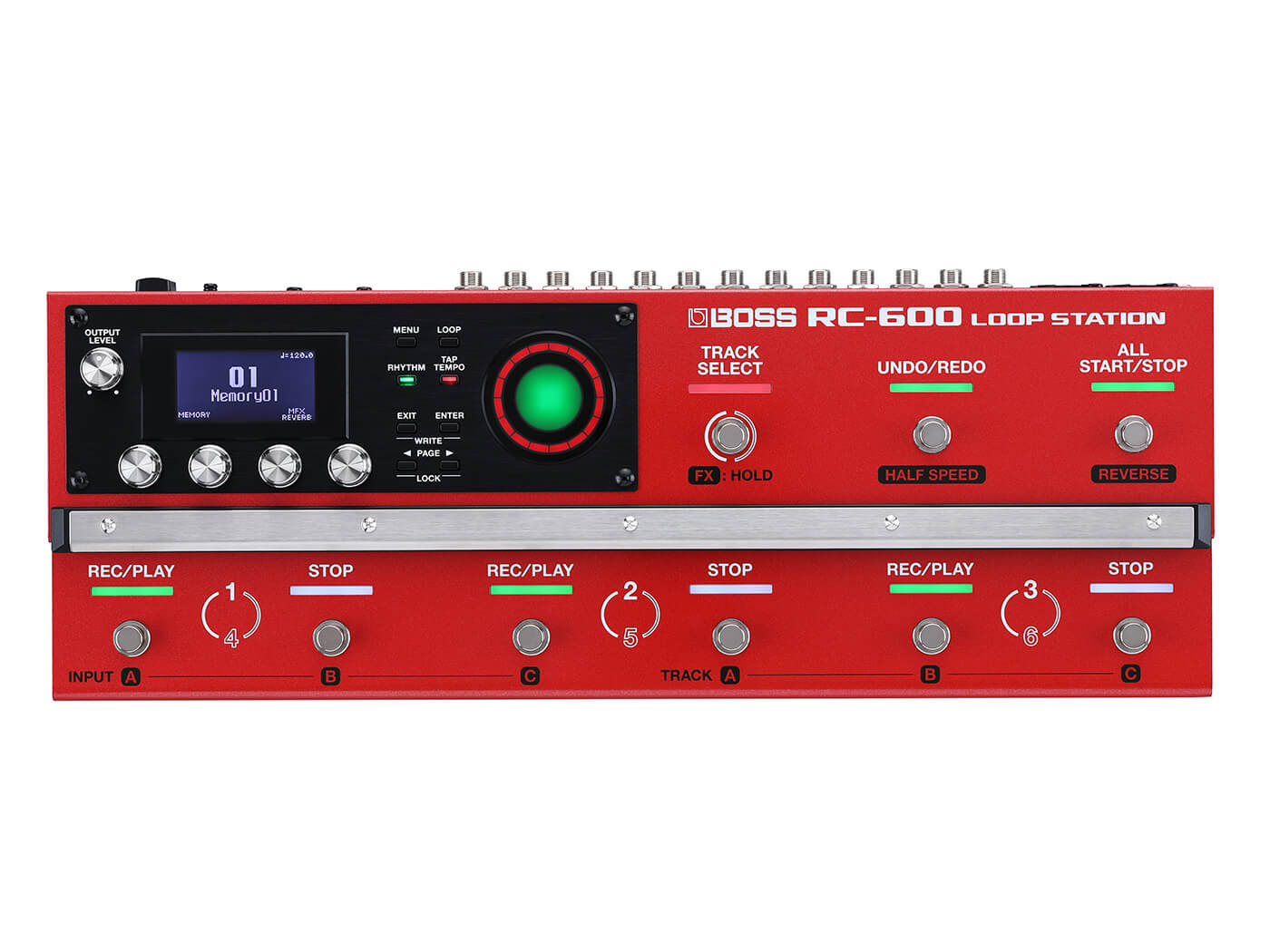