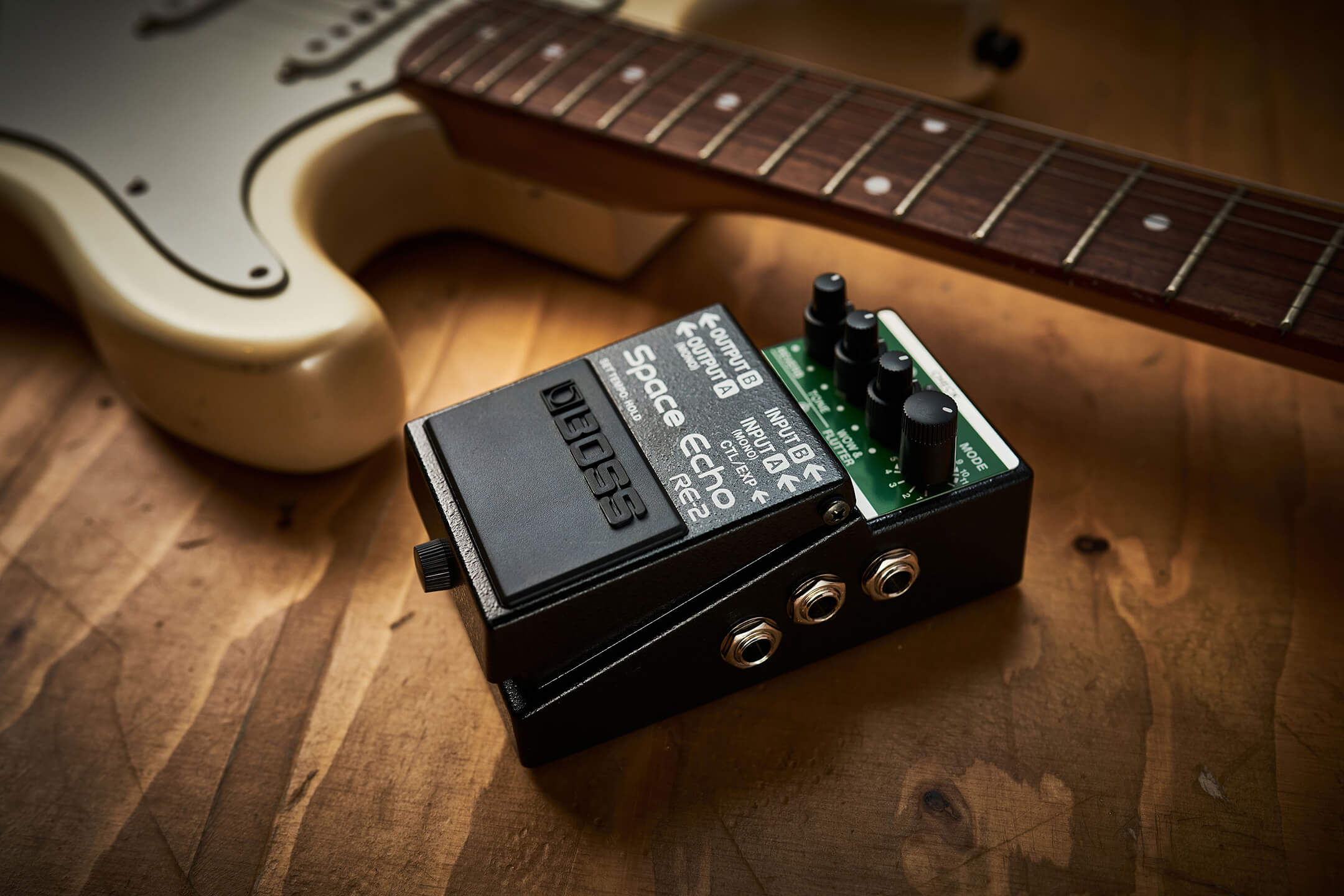 At last, the delay is over. Boss’s compact Space Echo pedal is out in the wild. But can the RE-2 live up to the viral hype?

You may have heard about the Boss RE-2 Space Echo a little sooner than you were supposed to. Thanks to an electronics retailer in Utah accidentally listing a bunch for sale on eBay in February, Boss was forced to step in and calm the resulting rumour-frenzy by announcing that the pedal was real and coming soon. That soon is now.

What’s so special about a simple digital delay box? This is the first-ever compact version of the hallowed RE-201 Space Echo, launched by Boss’s parent company Roland in 1974. If you’ve ever played through one of those massive tape-based machines, you’ll know why that matters.

Along with the bigger RE-202 (which we’ll be reviewing soon), the Boss RE-2 was made to replace the RE-20, a 15-year-old unit that already made a decent stab at reducing the Space Echo to a manageable size by fitting it in a dual stompbox. Now we’re promised improved tones and all the same features – plus an important new one – in a device that takes up about a third as much floor space as the RE-20.

That new addition is the Wow & Flutter control, which completes the simulation of real tape delay by letting you choose how old, grubby and wobbly you want your virtual tape to be. The only compromise to allow for the inclusion of this adjustable modulation is making do with a single tone control instead of separate treble and bass. 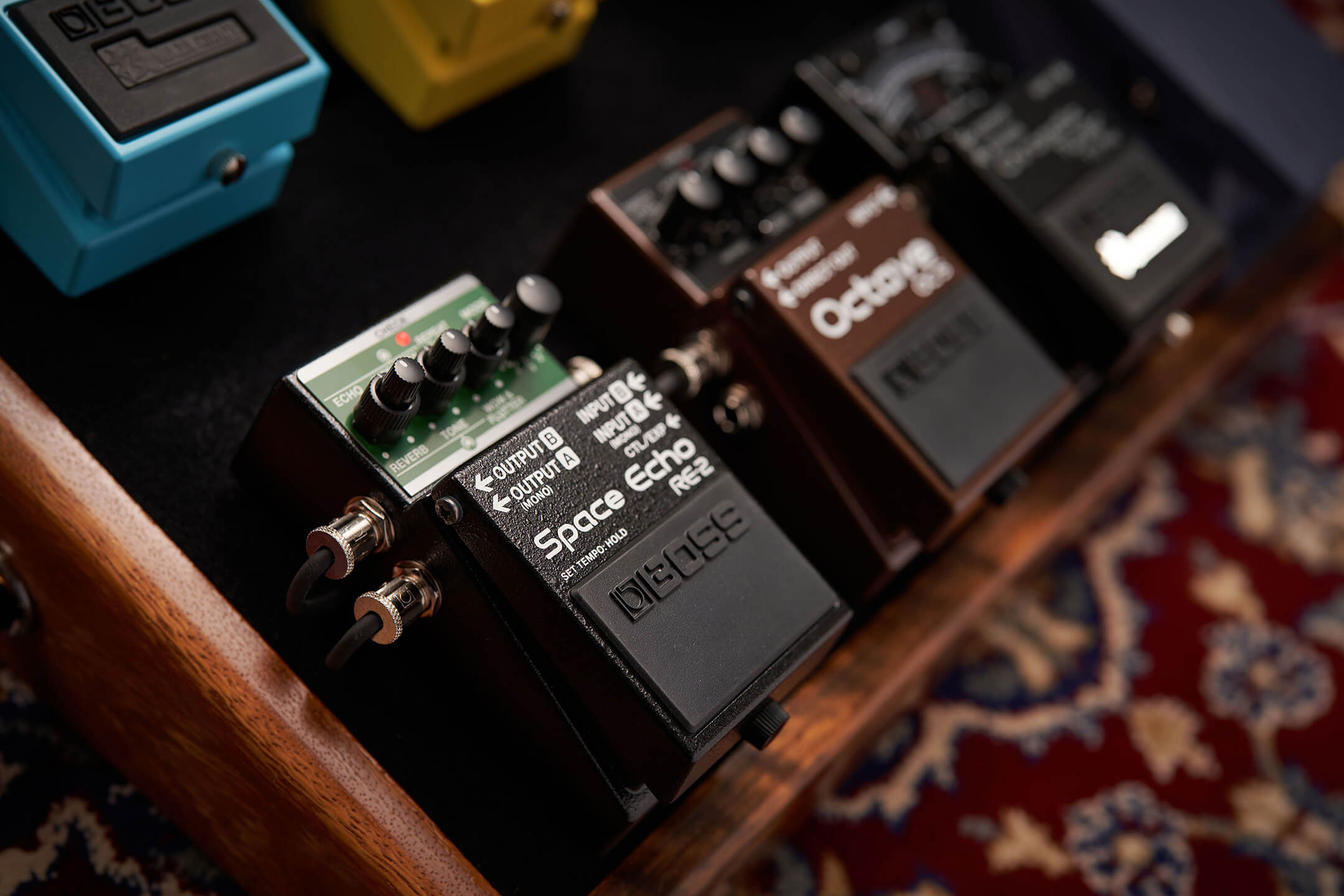 Boss has replicated the six-knob panel of the old pedal by using its now familiar concentric system, with the inner knobs controlling the top three functions and the outer knobs those along the bottom. It’s a crowded interface and it can take a while to learn top from bottom but that’s the price you pay for going compact.

As before, the all-important mode switch offers 11 combinations of playback heads, with all but the first four allowing you to add reverb to the mix. The only other thing missing here is the RE-20’s input level control – the RE-2 is fixed at bypass level, which will probably come as good news to most players.

There is, however, an option to select a digital replication of the RE-201’s preamp instead of the standard analogue dry-through, one of several extra features accessed via twiddling various knobs while the pedal boots up. There’s also the Carryover switch by the power socket, with which you can set the repeats to either trail away or cut off immediately when you switch to bypass. 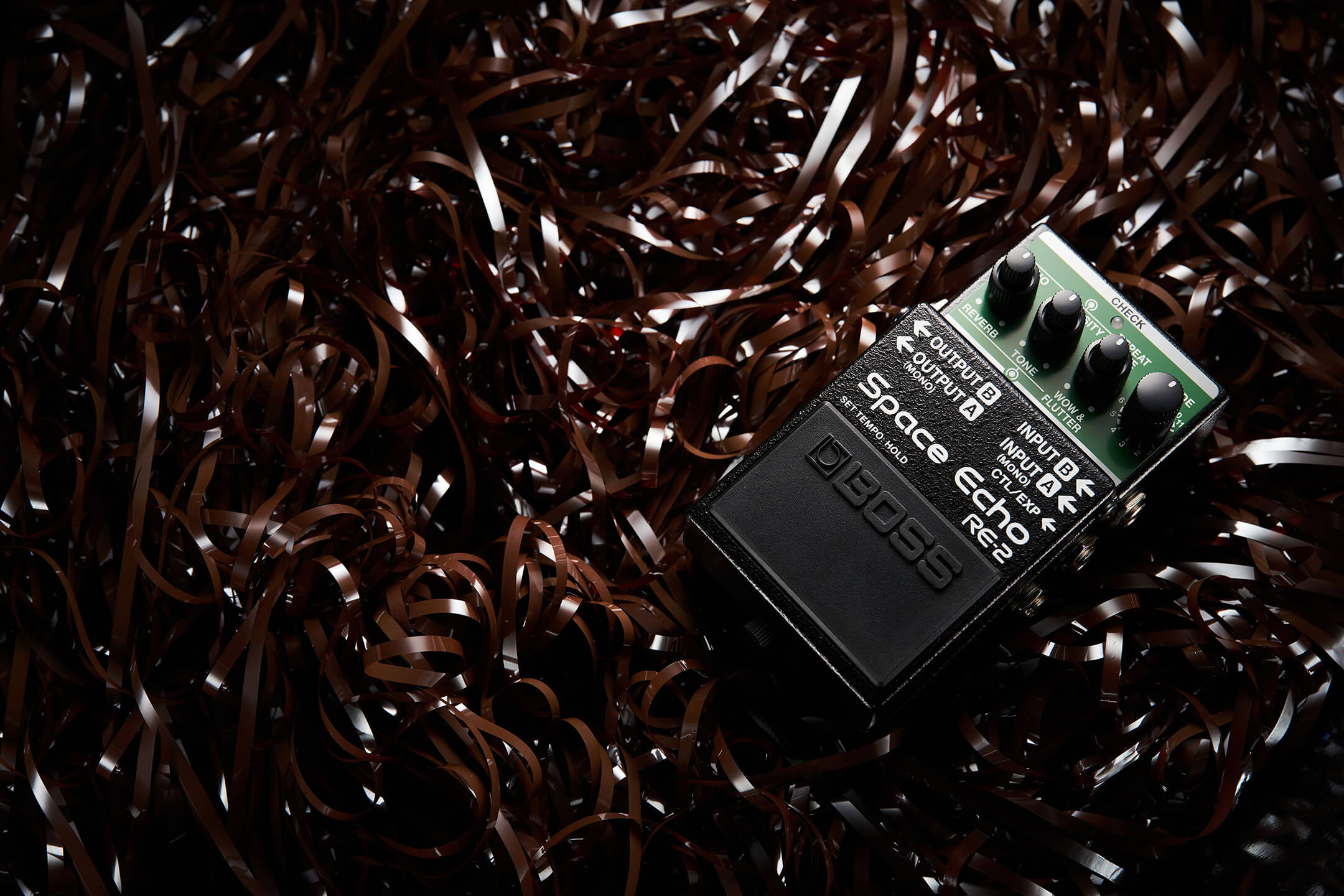 We’re told Boss’s new sound engine offers its “most meticulous recreation yet” of the classic RE-201 sound. And there’s no arguing with that. Against a background of virtually no added hiss – impressive in itself – the repeats bounce back at us in a way that is totally tape.

It’s not dry or digitally pristine. Nor is it scuzzy or muffled. Rather, it offers a pleasing blend of clarity and fragility with or without modulation. This is true in the three single-head modes and even more so with the combination settings further round the dial, where two heads playing back at the same time produce a uniquely smeary phasing effect.

The real advantage of a multi-head delay is being able to create dancing rhythms of repeats, and the RE-2 excels at bringing that extra complexity without sounding chaotic – especially if you turn the tone control shy of halfway and soften things with a dash of ultra-realistic wow and flutter. All we’re missing here is some stereo ping-pong magic: while the RE-2 does have stereo outputs, the repeats from a mono source run straight down the middle. 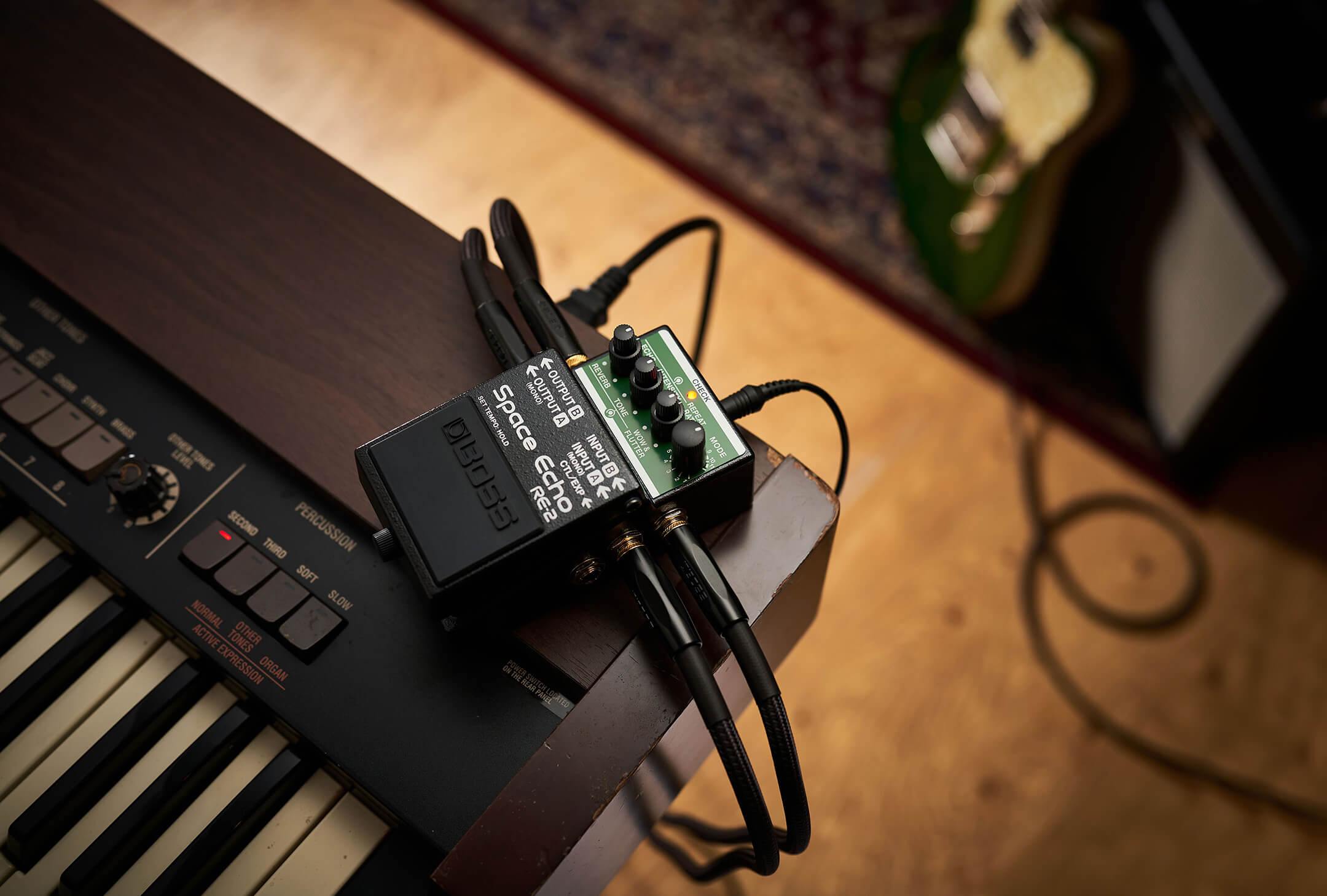 The reverb on its own is, as in the old Roland units, minging – cold and clangy with no sense of space. But it does have a use, adding a touch more depth to the texture of the delay. As long as you keep this dial set lower than the echo level, you might find it a handy effect.

Does this pedal sound as rich and fruity as an Electro-Harmonix Nano Deluxe Memory Man or Catalinbread Echorec? No. But it has its own, slightly more polite thing going on – and just like an original Space Echo, it will spill into self-oscillation with a little encouragement.

We’ll go into more detail on the boot-up options in our upcoming review of the similarly tweakable RE-202 but the highlight here is the ability to assign knob value changes to an expression pedal. The most obvious application here is to set the delay level, feedback and modulation to max out when you go toe down, which results in precisely the kind of overloading but entirely controllable chaos you’d hope for. 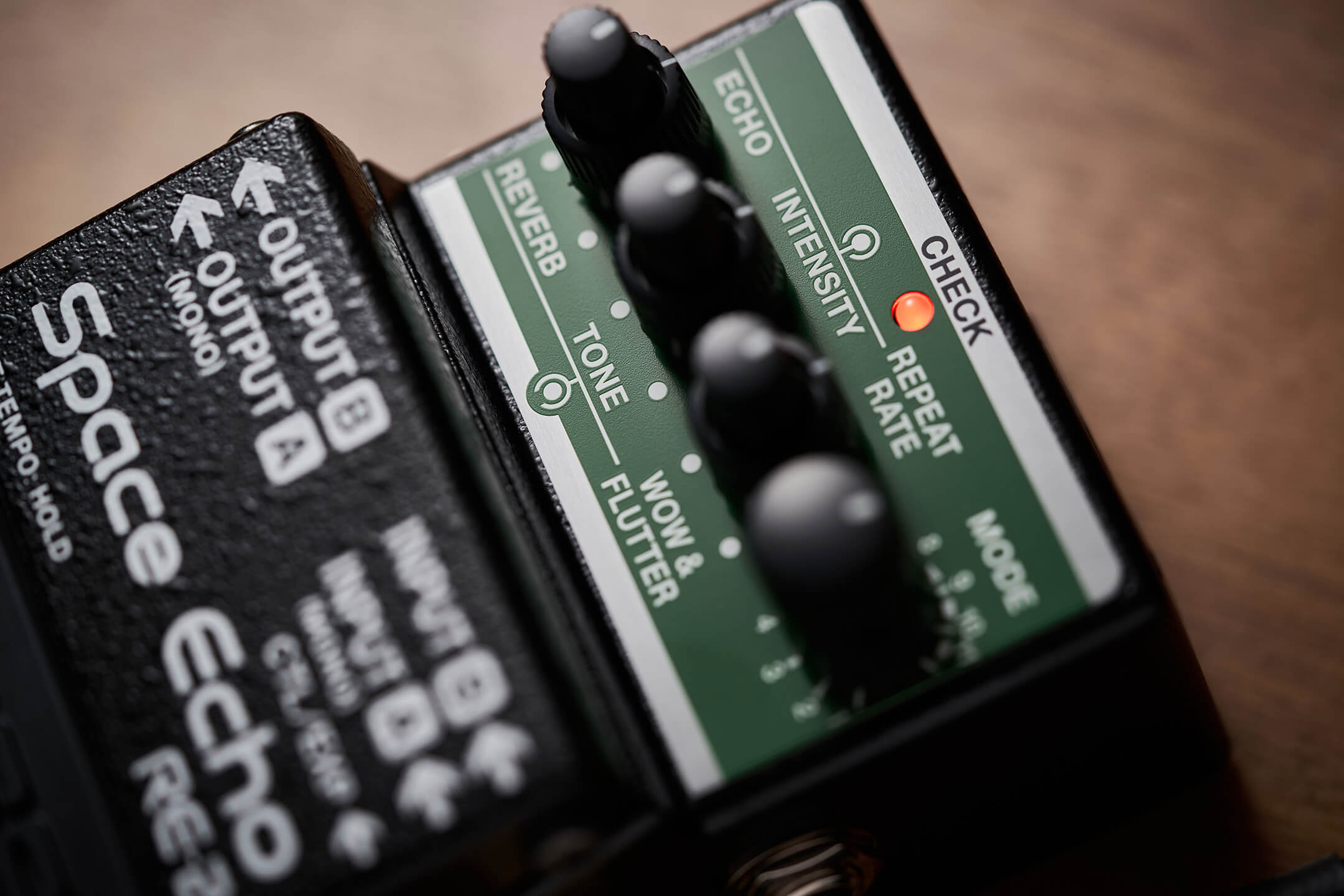 You can also change what happens when you hold down the footswitch for a second or so. By default this puts you in tap-tempo mode but the much more entertaining alternative is Twist, which provides something like the aforementioned chaos only with added acceleration. This sends the repeats spiralling upwards in pitch – always stopping on an F for some reason – then down again when you let go. It’s bonkers but fun.

There’s certainly more Boss could have done with this pedaL, but if the mission was to capture the entire personality of the Roland Space Echo in a standard Boss enclosure, the RE-2 is an indisputable success. 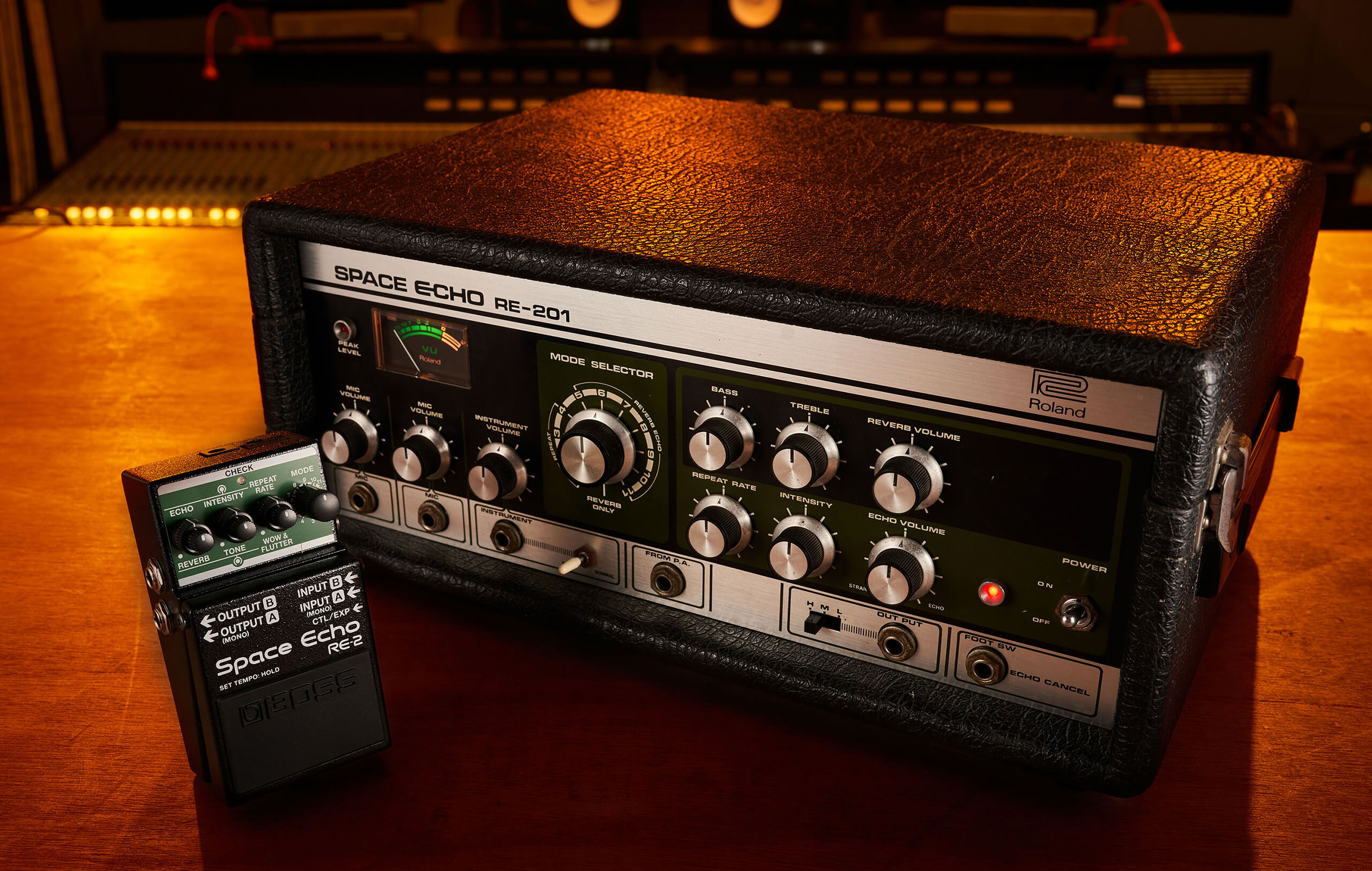