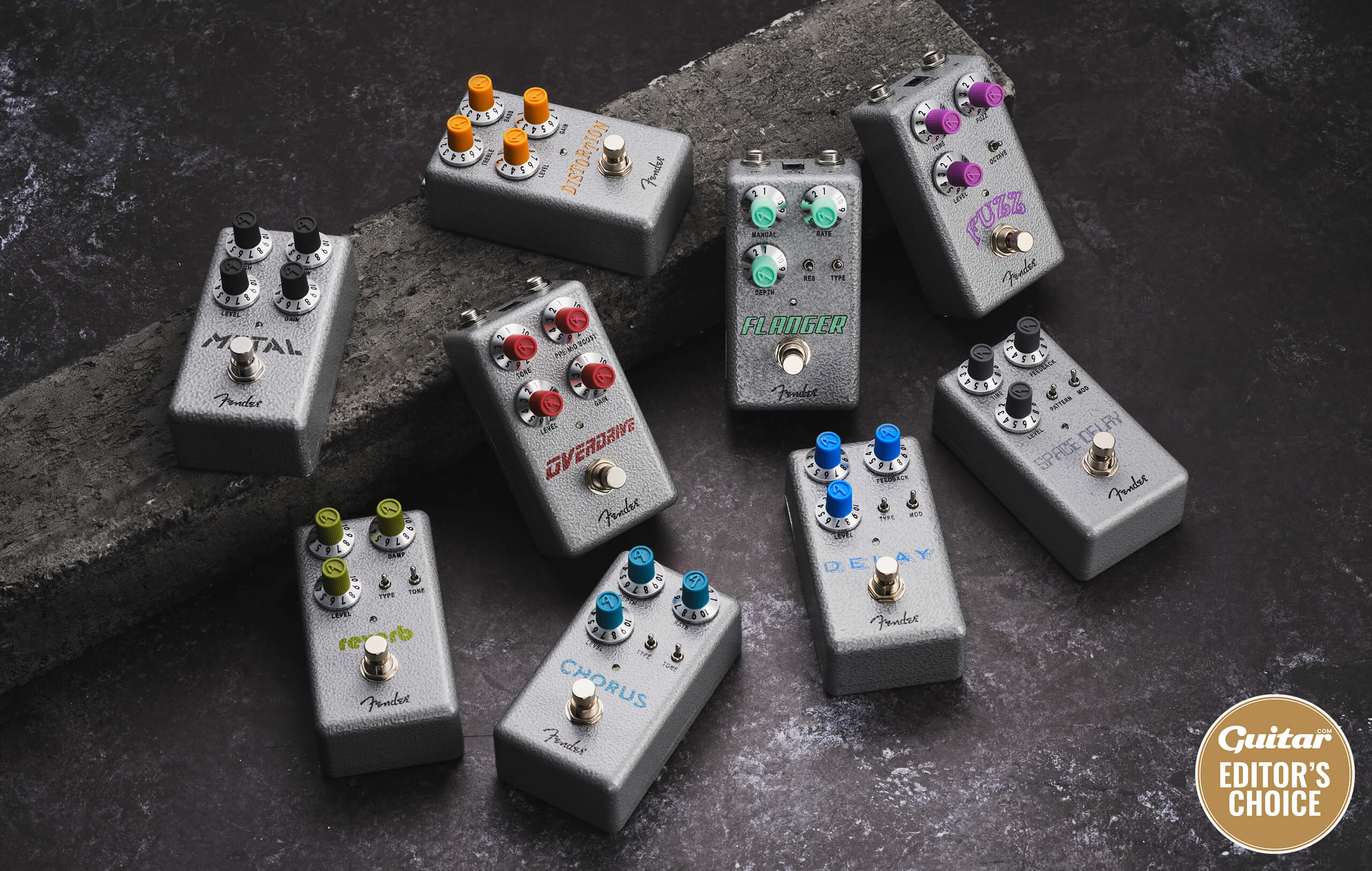 The Big Review: Fender Hammertone Pedals – budget effects for pretty much everyone

Fender jumps back into the affordable pedal market with a plethora of essentials aiming to outshine the competition. But can they compete with the crowded class of 2022?

Designed by Stan Cotey, the boffin behind the extremely well-received pedal line that Fender first launched in 2018, the Hammertone series aims to introduce new and young guitar players to the world of stompboxes – while also offering simple tools for working pros.

Featuring a hammered metal enclosure (hence the name), these otherwise understated units feature control knobs that give a nod to the one effects pedal in the company’s history that can truly be called a cult classic: the Fender Blender octave fuzz. But instead of being black they’re colour-coded per pedal, looking a bit like radioactive Wine Gums and adding a nice touch to differentiate these units from the pack.

Each pedal features a single screw on the back that stays attached to the back plate when undone, removing the risk of it rolling under your wardrobe never to be seen again. This enables rapid adjustments to those pedals in the range that feature internal trim pots – namely the Fuzz, Overdrive, Distortion and Metal.

Otherwise, every box here is remarkably simple and self-explanatory without feeling particularly ‘cheap’. There’s plenty of character spread throughout the nine models, which all have true-bypass switching and pedalboard-friendly top-mounted jacks. And there’s one more noteworthy detail: like the control knobs, each status LED matches the accent colour of the corresponding pedal.

We begin with the blue-accented Delay. This little stompbox is easy to use straight out of the box thanks to its simple three-knob setup; it offers up to 950ms of delay time, and despite the digital circuit it does have analogue dry-through. The ‘type’ switch lets you flip between one digital and two analogue modes (bucket-brigade and tape), each with switchable modulation.

Digital mode has an obvious clarity and presence, without the metallic sound often found in lower-priced delays – a good start. The first faux-analogue mode is ideal for subtle, tapered repeats that lend themselves well to a mix, and that subtlety allows for extra freedom with the feedback control. But tape mode is the pick of the trio, thanks to a more prominent midrange that showcases those loveable overtones. With some added modulation thanks to the second switch on the right, we’re right in Syd Barrett territory.

It doesn’t get as wild as the Space Delay that we’ll be coming to in a second, but the standard Delay’s target market isn’t the experimental guitarists among us: while it’s not a particularly exciting unit, it is very much a does-what-it-says-on-the-tin device, and that’s arguably the most important feature of a solid stompbox that will remain in your collection for years.

Indeed, the Space Delay fills in what the blue-themed pedal leaves out, being squarely aimed at anyone vying for a more ambient effect – be that shoegaze, dreampop or any other MBV-inspired sub-genre. Its aim is to replicate vintage tape delays that have multiple heads, which it does with aplomb, particularly given that sub-£100 retail price. The ‘pattern’ toggle lifts its usability into boutique territory, allowing the user to swap between a single repeat and two patterns of multiple heads.

We’re immediately enamoured with this pedal’s ability to self-oscillate, but must remind ourselves that it does include other sonic options: it’s particularly useful when playing rhythm passages thanks to its attenuated high end. In essence it’s virtually a reverb with less density, letting the repeats wash over your base tone.

And that brings us nicely to the Reverb – again, a more engaging pedal than meets the eye. Despite the surprising omission of a spring mode (particularly coming from the company whose amps did so much to make spring reverb a thing), the three modes included are plentiful in their tonal variations.

The hall setting has a distinctive shimmer in its top end, which lends itself nicely to chords around the 12th fret. It works best at lower settings, but a cavernous sound is there should you go looking. If you’re seeking a more subtle reverb then mode two, room, is where you’ll be most comfortable. It sits neatly alongside an overdrive for some extra aggression and is a clever way to add subtle reverberations that you can feel more than hear.

But plate mode is perhaps the most appealing of all three modes, adding a lush, metallic quality to arpeggiated melodies without too much intrusive attack. Dialling it in with the intriguing ‘damp’ knob – which when cranked allows the trails to slip away softly – allows for a more focused effect that comes closest to our vintage Fender FR-1000 reverb tank. At more extreme settings there are some less pleasing artefacts, but that’s to be expected at this price point.

A somewhat surprising inclusion in this cornucopia of affordable effects is the Flanger, which has beaten that pedalboard standard – tremolo – to make the cut. Exceptionally flexible, this unit will take more tweaking than its siblings to find the tones you’re looking for, but the results are arguably the most enticing in this series.

The real secret is the pair of switches, which act like two sonic escape routes. Leaning into peaky territory? Simply flick the ‘type’ switch and your feedback is tamed. And the same goes for the three-way ‘res’ toggle, there to alleviate any grievances with excessive resonance. Yes, flange is a Marmite effect, but rest assured that Fender’s version will encourage you to swallow a tablespoonful of the stuff.

The final modulation pedal in the range is the Chorus, and once again it’s a more resourceful box than the enclosure would have you believe. In reality it’s a chorus/vibrato pedal, as it does full-wet and full-dry sounds thanks to the inclusion of a nifty level control. Consider this a blend knob if you will, and suddenly the weirdness on board becomes a lot more amenable.

Again there’s more under the bonnet: in this case three modes accessed via the ‘type’ switch. Two-voice mode offers up traditional 80s-style effect, whereas single-voice mode is airier and better suited to arpeggios. The four-voice position is the most harmonically complex of the three, and with some patient tweaking it can conjure up some passable rotary sounds.

Really it’s the versatility that sells this pedal. For the younger players among us whose pool of influences can straddle the Frusciante/Cobain/DeMarco divide, the Hammertone Chorus is surely the perfect gateway drug.

With its psychedelic purple control knobs and solitary octave switch, it’s evident before the lilac jewel light beams on what Fender is aiming for with the Fuzz. A silicon-diode circuit similar to the one powering the Pelt fuzz, its power is in its simplicity. With all controls set to midday it’s sweet and present with a Velcro-ripping tonality that spits when you really hit those strings; but dial back the level control and it leans into early Jimmy Page, offering amp-like dynamics.

The tone control does take a little more adjusting than some, and its versatility is debatable in a band setting. But behind the octave switch is an achingly cool spitting tone that’s not unlike the sound of the White Stripes’ Icky Thump. Careful of those ring modulations, though – it can get chaotic.

Fender’s four-knobbed Overdrive is a brand-spanking new analogue circuit with an intriguing ‘pre mid boost’ control. With the mids at zero, its gain profile is akin to a Tube Screamer – all biting mids with a tight bottom end – albeit with a hotter gain profile. Cranking the gain control increases the compression too, but an essential cleanness remains underneath.

While we wouldn’t describe this pedal as particularly adaptable to low-gain settings, that’s not its true purpose. Its magic is in the mids. Put simply, that second tone pot helps you zone in on your desired tone to sit neatly in the mix whether you’re using single-coils or humbuckers. It’s a welcome inclusion on a pedal that retails for less than 100 notes, and once again shows that versatility and individuality needn’t be reserved for the boutique market.

Moving on to another new analogue circuit, the Distortion ditches the standardised tone control for an active two-band EQ section. Firmly pitted towards the ongoing trend for 90s and early-noughties nostalgia and revivalism, it does indeed deliver a Goliath-like boom even with a single-coil neck pickup.

Fender claims it’s also great at subtlety when you dial back the gain knob, but why bother when cranking it is this much fun? Widening out the EQ, we’re met with an analogue snarl that pleads for our best Kim Thayil impression, particularly when swapping out our Strat for a Les Paul. The inclusion of treble and bass controls lets even the most amateur player dial in their perfect EQ; and while this one’s not as versatile as the Overdrive, it does possess enough thump to rival pedals twice its price.

Last in line is what’s likely to prove the most understated stompbox in the range, the Metal. Interestingly, the Metal and Distortion pedals are somewhat interlinked, the former acting as a midway point between Fender’s Full Moon Distortion and the streamlined Hammertone version. Again it features a two-band EQ: ‘low’ boosts around 200Hz, while ‘high’ acts more like a shelf around 4-5k. 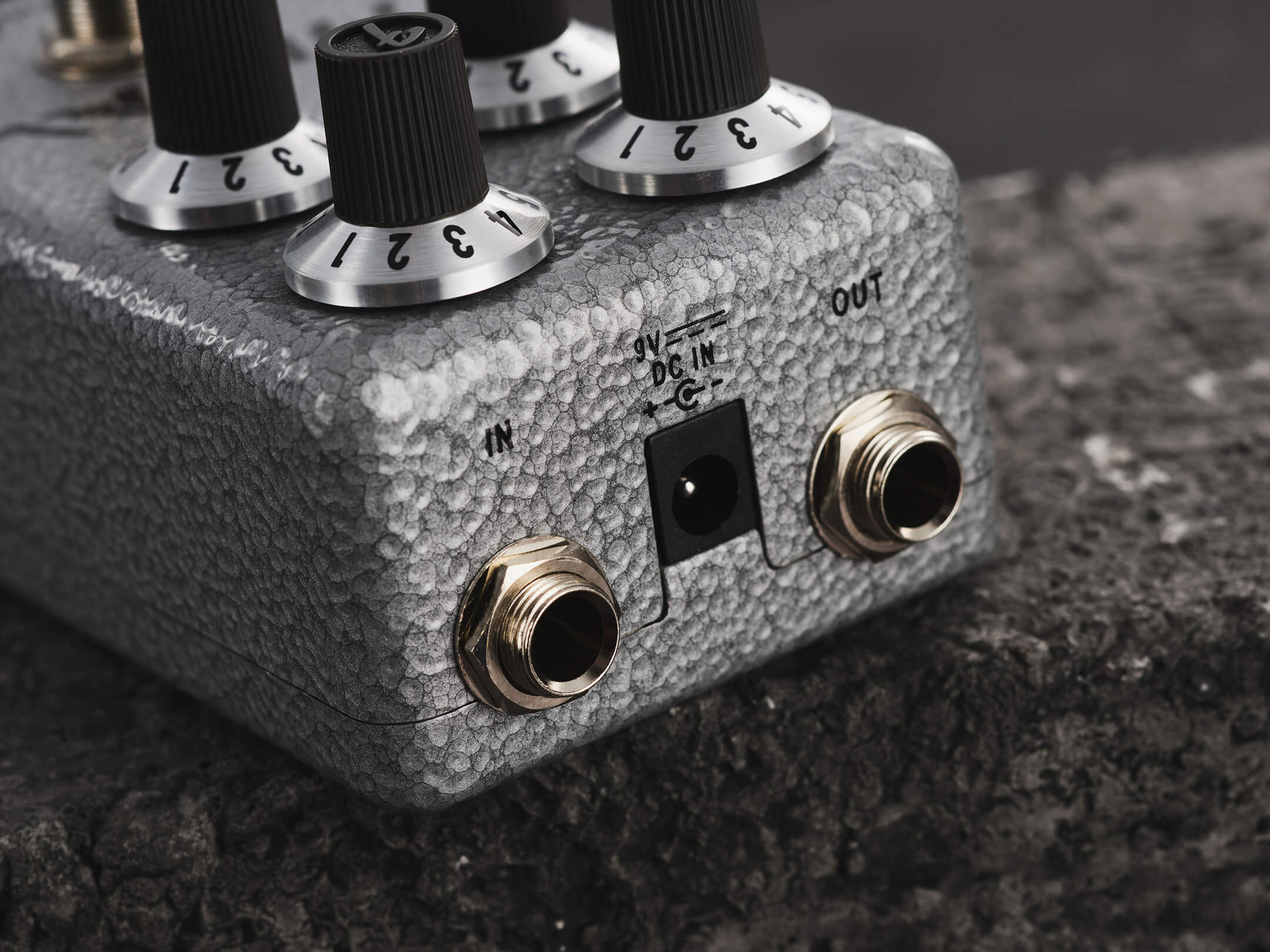 The gain knob here has a smooth taper, taking you from subtle British rock to all-out nu-metal. It’s an exceptionally quiet pedal, and the internal trimpots for mids and high treble only add to its versatility: if you’re looking for a more scooped midrange, simply whip off the back cover and you’re good to go with a quick tweak. This is not a recreation of the Boss MT-2 or HM-2, but a brazen homage to monstrous, glass-shattering distortion tones.

We’re consistently impressed by Fender’s recent output in the effects department. While it’s no secret that its stompboxes have been considered lacklustre in years gone by, since 2018 the approach has been consistent, contemporary and in direct competition with the boutique market… and the Hammertone series is no exception.

Every pedal in the range is robust, gig-ready, low-profile and, crucially, low-cost. There are no confusing layouts, screens, dipswitches or I/O – just affordable, high-quality stompboxes that look and sound the part.