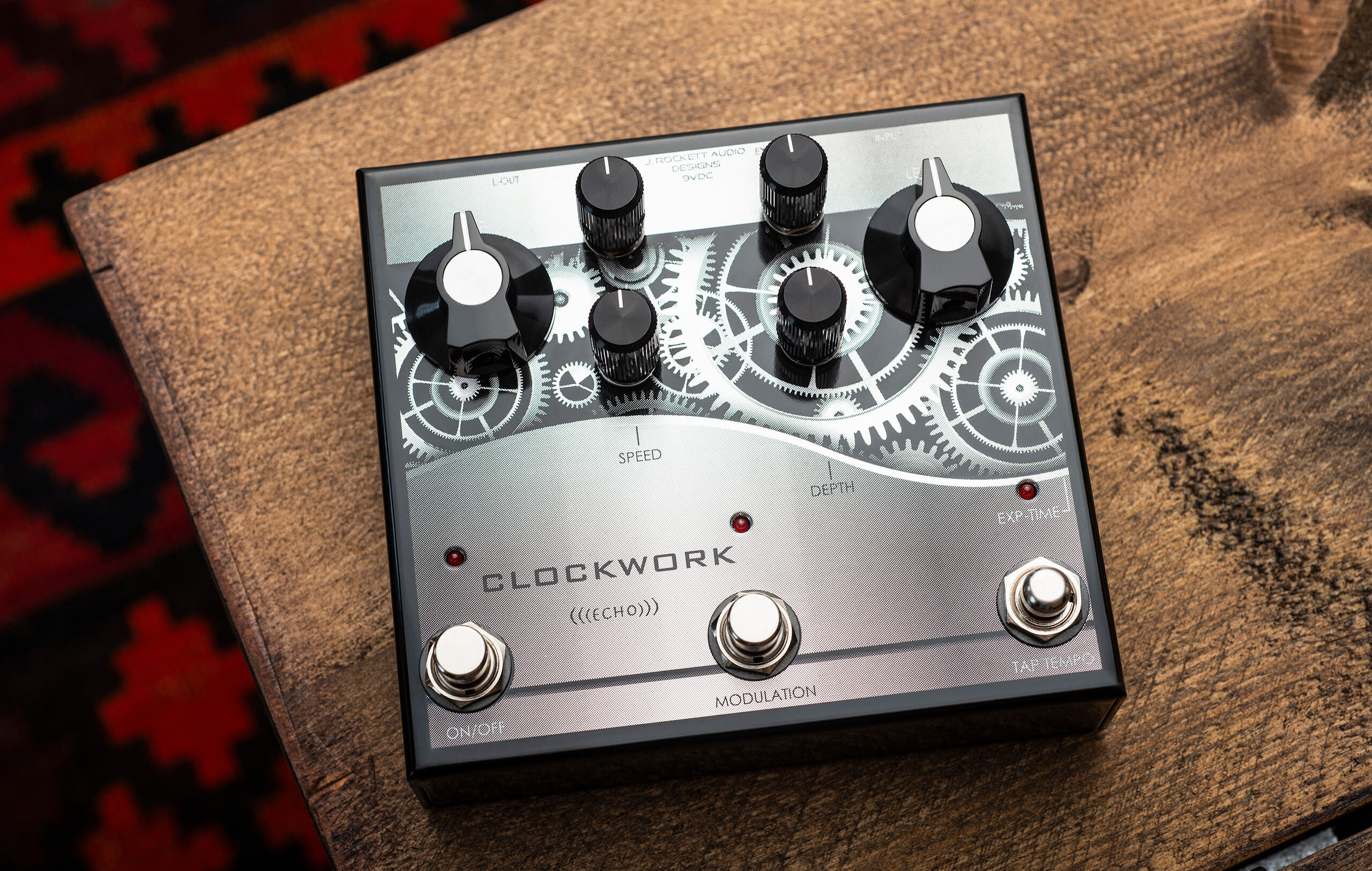 Created with input from the designer of the world’s best-loved delay pedal, J. Rockett’s first Vintage Series device wants to help you make some new memories.

You don’t hear much about the people who designed the classic effects of the 1970s and 80s – the idea of ‘stompbox nerd as celebrity’ only really took off this century. But Howard Davis, designer of the Electro-Harmonix Deluxe Memory Man, is one backroom pioneer you might have heard of… and this is his latest project.

Designed ‘in conjunction with’ Davis, the Clockwork Echo is the first pedal in J. Rockett’s new Vintage Series. Its stated aim is to capture the sound of that legendary bucket brigade delay but bring it up to date with modern functionality.

For a start, that means it runs off a standard 9v power supply rather than the Memory Man’s 24v brick. The modulation of the repeats can be switched on and off with a stomp, while a third footswitch is used for tap tempo (up to 600ms); and there are two expression pedal inputs: one for controlling the delay time, one the repeats. If you have a pair you can use both at once, though you may need a third leg to balance on.

The second output flips the delay’s phase for a bit of stereo spread, and there’s one more interesting addition: a level knob for boosting the dry signal. Unusually, this remains engaged even when the unit is in bypass, so you might well describe it as an adjustable buffer.

All of this comes in a relatively small but weighty enclosure, with cog-themed artwork across the control surface that looks very smart but doesn’t exactly help with clarity.

Even if you’ve never used a Deluxe Memory Man, you’ve surely come across some of its many descendants. It very quickly becomes clear that the Clockwork goes right back to the source – and that Mr Davis, who last surfaced in collaborations with Pigtronix and Xvive, has not lost his touch.

Basically it sounds like a Memory Man… uncannily so. The first few repeats are clean enough, just a little softer-edged than a hard digital attack, and it’s only after a good six or seven times around that things really start breaking up. They do so in classically murky style, accompanied by a noticeable surge in background hiss that’s one feature of the original we wouldn’t have been sorry to lose.

The modulation has independent controls for rate and depth but you’re not likely to be twiddling these much: once you hit that sweeter-than-sweet wobble with both knobs close to noon, especially with a stereo rig, you won’t want to change a thing.

There are virtually delay-free chorus effects available with the delay time at minimum, but a more rewarding exercise is to crank the repeats into self-oscillation then manipulate the time with an expression pedal. The resulting Whammy-like pitch swoops are really something.

We should mention that our review unit arrived with a couple of loose knobs and, more worryingly, a tendency to crackle loudly on the first repeat after a hard-struck high note or harmonic. That’s pushing the definition of ‘charming imperfection’ a little far… but the five internal trimpots are easily accessible, and a tweak of the left-most one soon fixed that issue.