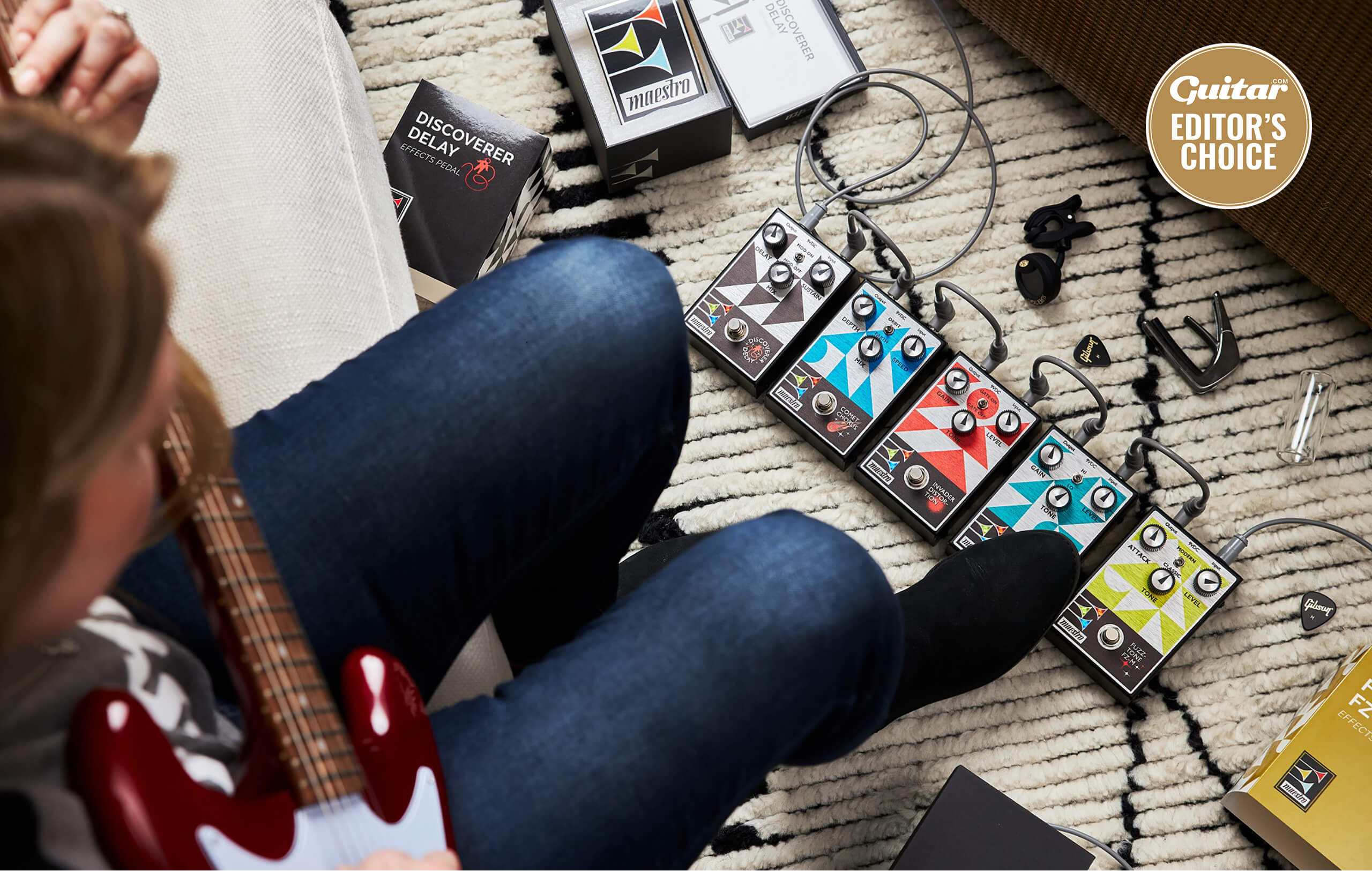 A name from the very first days of the stompbox era returns, but can these updated offerings from the Gibson stable compete with the class of 2022?

Nostalgia doesn’t really work if you’re going back so far that nobody remembers the thing you’re reviving. For this reason, the new Maestro effects pedals need to be not just cute, evocative or sexy, but actually good.

Well, how many of us were alive and playing the guitar when the original Gibson-made Maestro FZ-1 Fuzz-Tone – the first ever commercially successful stompbox – was launched in 1962? Or even when it got its big break, courtesy of Keith Richards and his honking Satisfaction riff, three years later?

There’s no arguing with the pedigree of Gibson’s pedal brand; the only trouble is that it’s been in hibernation since 1979. Still, it doesn’t hurt that these five units – very much inspired by the past but designed to appeal to modern players – are indeed cute, evocative and sexy.

Leading the line is the Fuzz-Tone FZ-M, an update of the FZ-1 that harks back to the original’s wedge-shaped enclosure but immediately sets itself apart with a bold colour scheme and a ‘classic/modern’ switch. It’s joined by the Ranger Overdrive, Invader Distortion, Comet Chorus and Discoverer Delay – each fitting into the theme with a different colour and pattern on its brushed metal panel, and each making clever use of the old ‘three bugles’ Maestro logo as a triple status LED.

They’re surprisingly heavy chunks, with true bypass switching and pedalboard-friendly top-mounted jacks, and all share the same basic layout of three knurled knobs plus a toggle switch in the middle. Three of the five also have an internal trimpot (two in the case of the delay), accessed by loosening the four side screws and letting the base flap open.

Is it reasonable to feel betrayed by some LEDs? Probably not, but we’re still a teeny bit disappointed that those bugles aren’t really red, yellow and blue when lit – the top two are more like orange and lime green. Luckily though, it doesn’t take very long for the FZ-M to make us forget any such negative thoughts.

Starting in classic mode – well, it’d be perverse not to – we first get the Satisfaction riff out of the way (yep, sounds great) and then start exploring. It should be raucous and it absolutely is, but there’s a tightness to the bottom end that balances the raspy aggression of the treble. Single notes can sound scratchy, but for spirited chord work it’s a joy.

And the good news is, it’s even better on the modern setting. This gives a much thicker, less fizzy voicing that’s instantly addictive and will probably prove more useful to most players. It’s also got two unexpected tricks in its locker: firstly, it sounds lovely and clear with the guitar’s volume backed off a bit; and secondly, if you max out the tone control in this mode it produces a wall of insane but entertaining metallic noise.

Frankly, the other four pedals are on a hiding to nothing after all that – but the Ranger Overdrive does it best to maintain the mood by carrying with it something of the FZ-M’s unruly spirit. There’s a lot less gain to play with here, but that’s not to say it’s a genteel tone-tickler.

In tone terms, it’s chunky in the midrange but markedly softened down in the treble. There’s an intrinsic scuzziness to the drive itself that gives it a garage-y feel, but it can be tasteful when the gain’s set low – partly thanks to the variable amount of clean signal that’s mixed in, Klon-style.

As with the fuzz, flipping the Ranger’s toggle switch to the up position brings even more thickness to the mids, this time accompanied by some more dirt and compression (and no more clean content); it’s a distinct ‘second voice’ that’s good to have on board and is enough to mark this out as more than just another medium-gain overdrive.

There’s lots more gain on offer with the Invader Distortion, an uncompromising noise box that’s aimed squarely at metal players. Even with the three controls set no higher than halfway, there’s enough sizzle here for a bit of djent chugging – and maxed out it’s about as mean as it gets.

It’s a shame about the gate, though – we’ve used much better. It kicks in with a slight ‘pop’, and merely reduces the level of noise rather than cutting it out completely. There’s a trimpot for adjusting the threshold but it doesn’t help much, and we’re inclined to think it might have made more sense to leave this feature out completely and fit a midrange voicing switch instead.

Right, that’s enough of the noisy stuff. The Comet is here to soothe our ears with some sweet modulation… and when we say ‘sweet’, what we’re talking about here is a veritable pick ’n’ mix counter. To call it a multi-effects device might be a slight exaggeration, but it’s certainly more than just a chorus pedal.

In ‘earth’ mode with the mix dial around halfway, we get a chorus effect that’s eminently likeable, with the emphasis on Leslie-esque colour rather than sickly 80s-style lushness; then as we turn the mix up towards maximum, that morphs into something very close to pure pitch vibrato. The only snag here is that you also get a bump in output level, which could cause issues in a gigging context.

Switch to ‘orbit’ mode and, with the trimpot at its factory setting, we’re suddenly dealing with a tremolo pedal – one with maybe just a whiff of phase-shifting around the edges. Nice… and if you want more than a whiff, a quick tweak with a small Phillips screwdriver is all it takes to blend in some chorus and turn that into something more like harmonic tremolo. At fast speeds it really does sound almost like a Leslie sim, and we like it a lot.

That just leaves the Discoverer, a bucket-brigade delay with switchable modulation that comes into a very crowded field and, if we’re being super-harsh, doesn’t really offer anything new. But it does sound mighty good, with a balanced tone to the repeats that’s not too bright and not too mushy, and has just the right amount of natural roughness.

Crank the sustain knob and it will just about drift into self-oscillation, with the repeats getting ever more clonkily percussive as they decay. You can adjust the depth and rate of the modulation, but you probably won’t want to as the factory settings are bang-on – so the fact that both trimpots are a little tricky to reach, hidden behind a bunch of cables, isn’t really a problem.

We’re looking forward to finding out what else is coming from Maestro – the second crop will apparently include something based on the legendary PS-1 phaser – but for now, this is a solid start. And in the case of the Fuzz-Tone FZ-M, a really quite spectacular one.