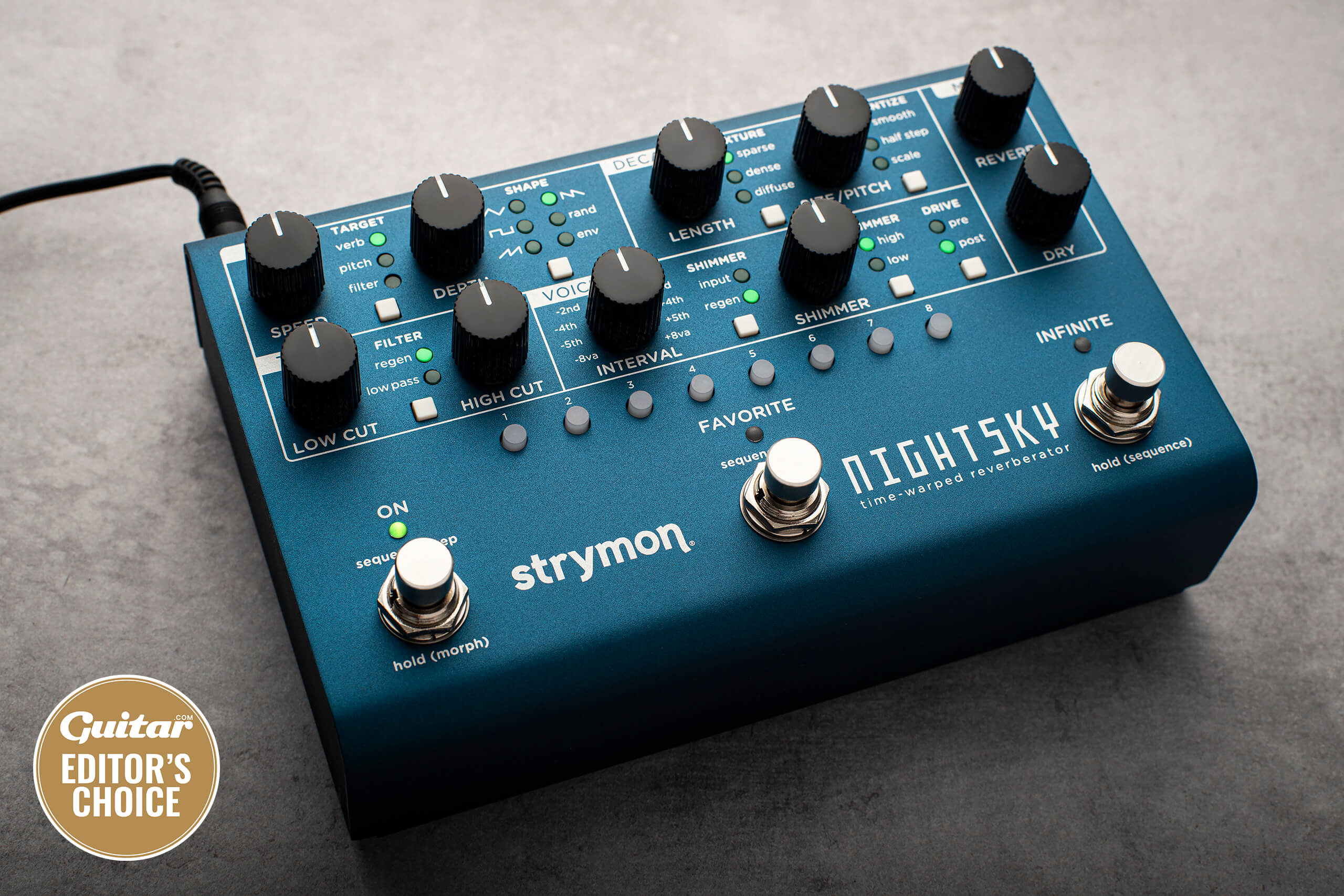 The Californian digital guru’s latest launch is a high-end reverb unit designed for extravagant soundscaping. Will the NightSky leave us starry-eyed?

Strymon describes its latest flagship stompbox as ‘a reverberant synthesis workstation and hands-on experimental sound design platform’. This means two things. One, it’s a very fancy reverb. And two, we have absolutely no chance of getting all the way through this review without using the phrase ‘ambient soundscapes’.

Since the turn of the century, thanks to huge developments in the power of digital signal processing, reverb is probably the one effect type that’s evolved more than any other. Now the race is on to see just how far that technology can be pushed – and the promise of the NightSky is new levels of otherworldly freakishness, coupled with a broader-than-ever sonic palette.

It’s a lot more ambitious than the much-lauded BigSky, and Strymon’s challenge is to keep all the NightSky’s trickery accessible via a user-friendly interface that doesn’t require a physics degree to navigate. There is a downloadable 53-page manual, but in theory we should manage with the single-sheet guide to the basics that comes in the box. 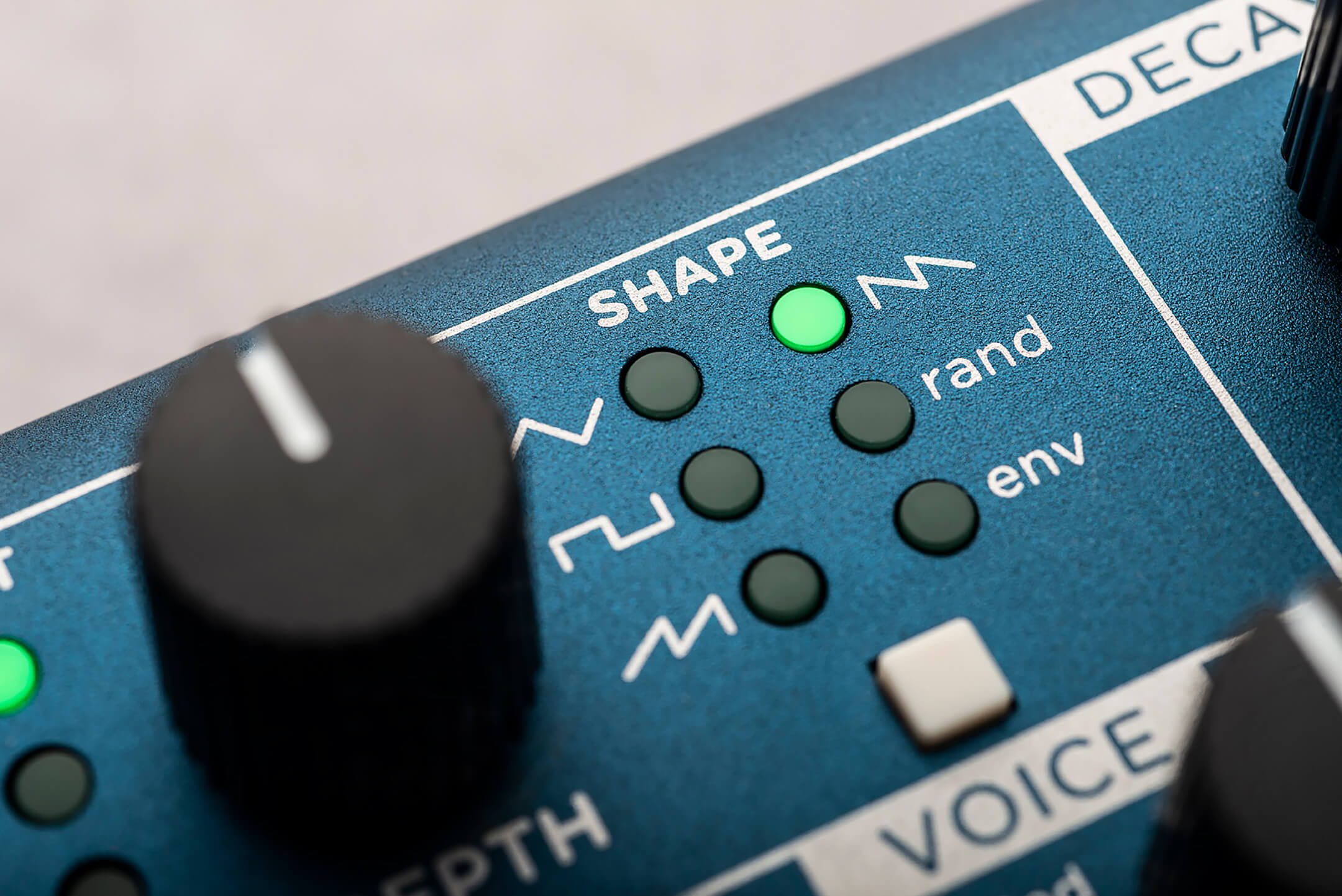 So what are those basics? Well, first up it’s a mono and stereo device, so for most of our testing we’ll be running it into two amps for maximum immersion. An analogue dry path means your original signal runs through without any digital tampering, and there are 16 factory presets that can be accessed (and edited) via a row of eight light-up buttons – green for sounds 1-8, orange for 9-16 – across the middle. If you have a suitable MIDI controller the number of available preset slots goes up to 300, which should be enough for a few lifetimes.

the promise of the NightSky is new levels of otherworldly freakishness, coupled with a broader-than-ever sonic palette

There’s an input for a standard TRS expression pedal to morph between two chosen sounds, a ‘favorite’ footswitch for hopping between preset and manual modes, plus an ‘infinite’ footswitch that freezes the current reverb in mid-decay and lets you paint fresh wonders over the top of it.

And that brings us to the sounds themselves. Everything really starts with the texture button, which allows you to select from three different reverb types: ‘sparse’, ‘dense’ and ‘diffuse’. On top of this, you can choose the type, waveform, speed and depth of the modulation that will be messing that reverb up; and then add a shimmer effect at any interval, not just an octave above, with optional high or low ‘glimmer’ for added harmonics. 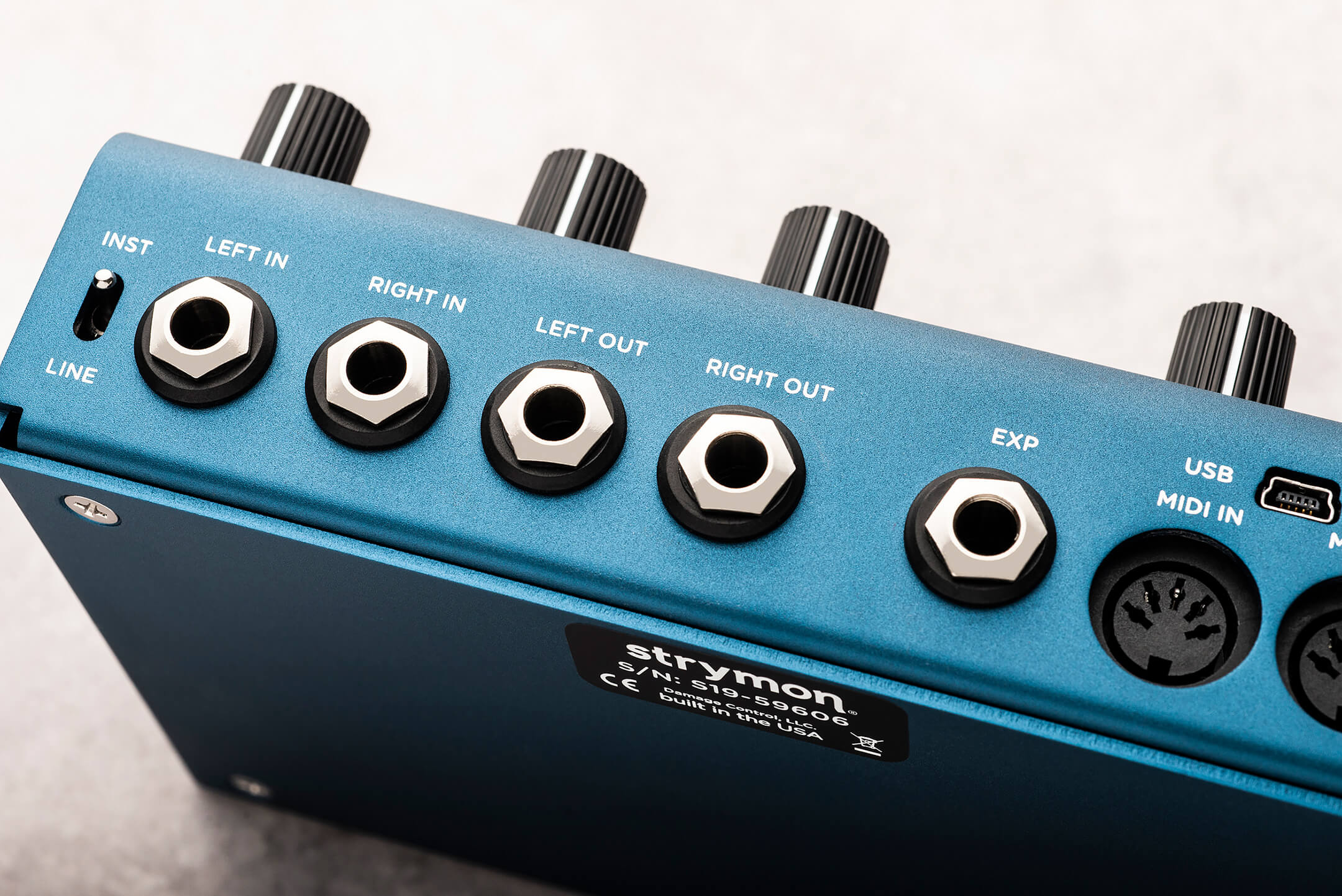 A filter section offers complete control over the tonality of the decay, and that just leaves the bonus party trick of an eight-step sequencer for creating glitchy rhythmic patterns. Essentials covered, let’s dive in.

With our two amps turned up loud enough to drown out the rest of the world, it takes no time at all to discover the essence of the NightSky. It’s right there in preset one, in fact: with the reverb mix set anywhere past halfway, this is a warm bath of lavender-scented lushness. There’s no in-yer-face modulation or shimmer being added here, but a hint of natural wobble gives it just enough depth to turn the humblest melody into a mystical trip.

The second preset makes things deeper and more fluttery, using the more granular ‘sparse’ reverb type and adding a low octave, while the third takes us in another direction altogether with an intense rhythmic filter that’s effectively running the decay through an auto-wah. And so it goes on through the rest of the 16 presets, exploring ever more fanciful warping effects (including disorientating pitch-swoops) but always allowing the dry signal to sit just as high above the maelstrom as you need it to. 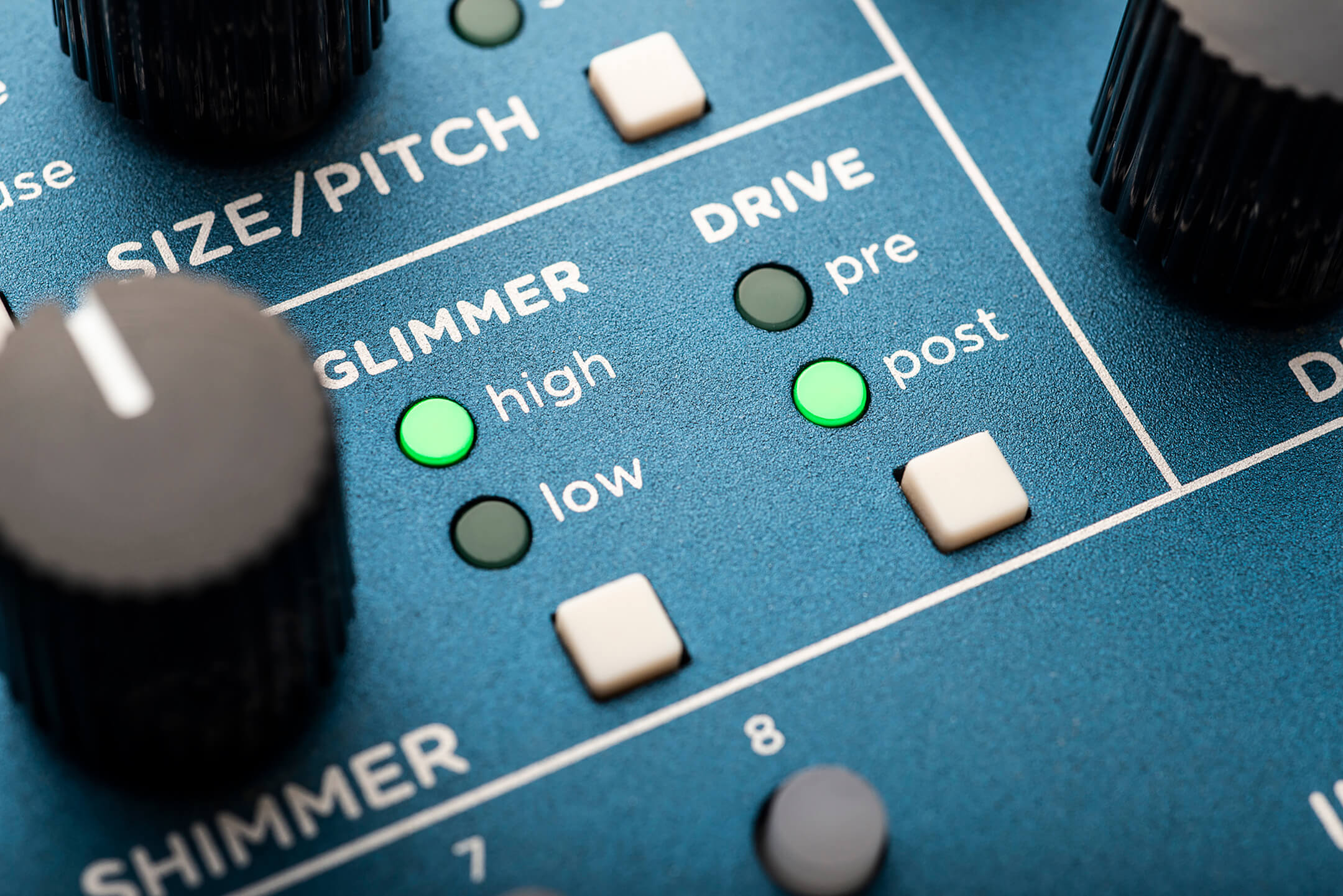 You might get by on presets alone; but it seems a shame to waste all those knobs and buttons, so let’s start twiddling and see what else we can uncover. We’ll begin with a fairly standard hi-fi reverb sound – yes, they’re in there somewhere – and first explore the different decay options.

The main difference between ‘dense’ and ‘diffuse’ is that the latter has a generous pre-delay, making it a better option for slow-building swells. ‘Sparse’, however, is a whole other animal: slow it down enough and you can clearly hear it’s not really a reverb at all, but more of a hazy multi-tap delay. The ‘quantize’ button is particularly effective here as it alters the rhythm of the repeats – which, incidentally, have a ping-pong pattern when used in stereo.

There’s no in-yer-face modulation or shimmer being added here, but a hint of natural wobble gives it just enough depth to turn the humblest melody into a mystical trip

Now we move to the modulation section… and this is where the strange stuff really kicks in. Dialling in a bit of tasteful flutter is simple enough, but it’s equally easy to create a dramatically pulsing throb and then pull it back just low enough to avoid overwhelming the mix. The four geometric wave shapes all create different results here, but the random and envelope settings are shortcuts to all kinds of lunacy – not all of it entirely likeable. 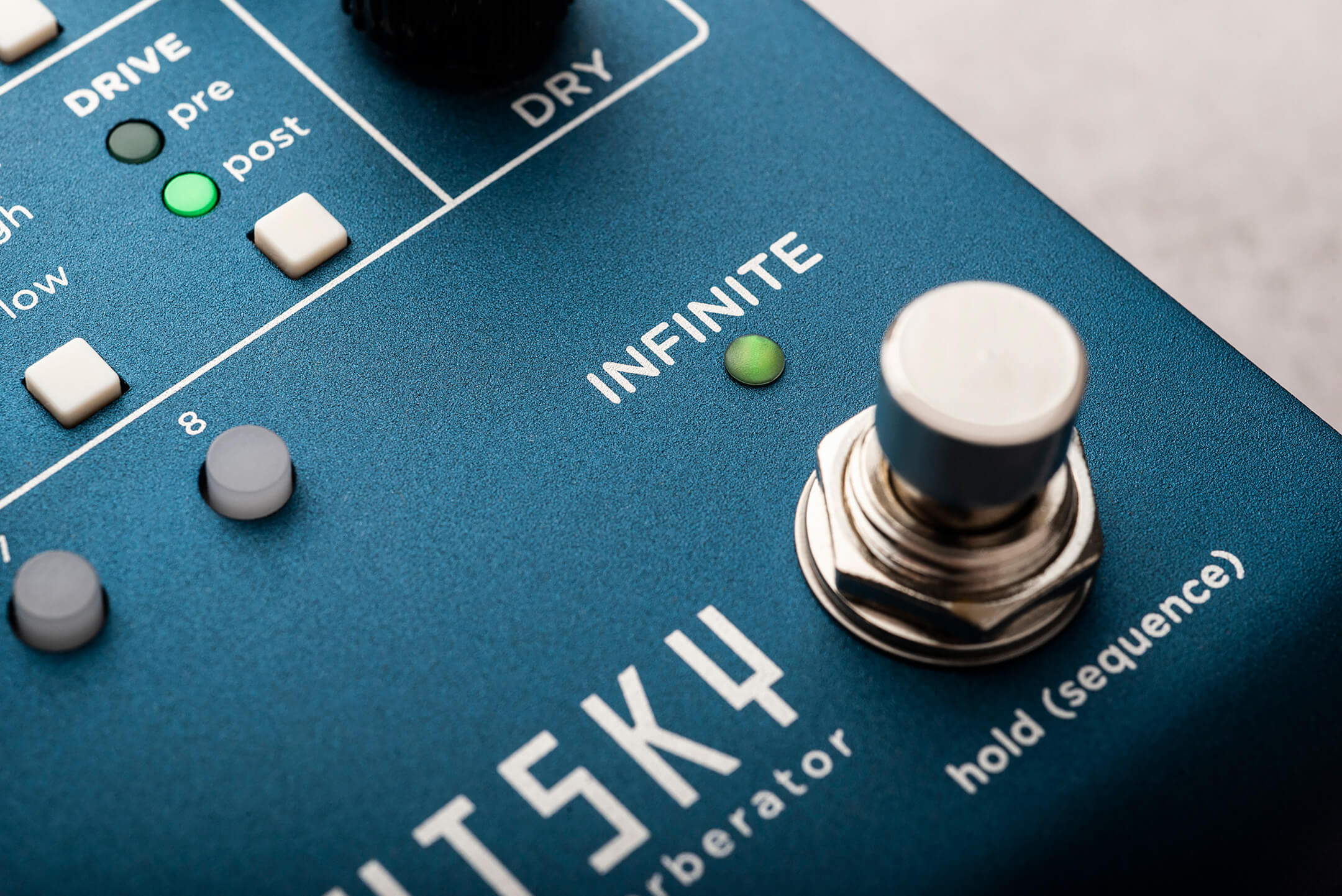 If you want to get ethereal, though, it’s all about the shimmer. Strymon has loaded up this unit with full control over the pitch, intensity and texture of the added harmony, with the ‘glimmer’ function bringing a subtle but welcome extra element of washiness. You can even choose at which point in the circuit the shimmer effect is applied: at the reverb’s input for maximum clarity, or within it for a more naturally blended feel.

the NightSky’s secret weapon is that ‘infinite’ footswitch. This is hardly a new invention but we’ve never heard it done quite so musically as this

But the NightSky’s secret weapon is that ‘infinite’ footswitch. This is hardly a new invention – we’ve seen similar moment-freezing functions in pedals from Eventide, Gamechanger Audio and Electro-Harmonix – but we’ve never heard it done quite so musically as this. The sonic snapshot is long enough to preserve some movement from the modulation and somehow it always seems to sound strangely lovely, no matter what you were playing at the moment of capture.

A long press of the infinite switch engages the sequencer, which is perhaps a little less exciting than it seems. All it really does is run through a series of background noise pitches at a speed of your choosing – a clever feature that’s worth exploring but might not change your life. Really the NightSky exists for one purpose alone, and that’s to be the ultimate creator of – yes, here it comes – ambient soundscapes.