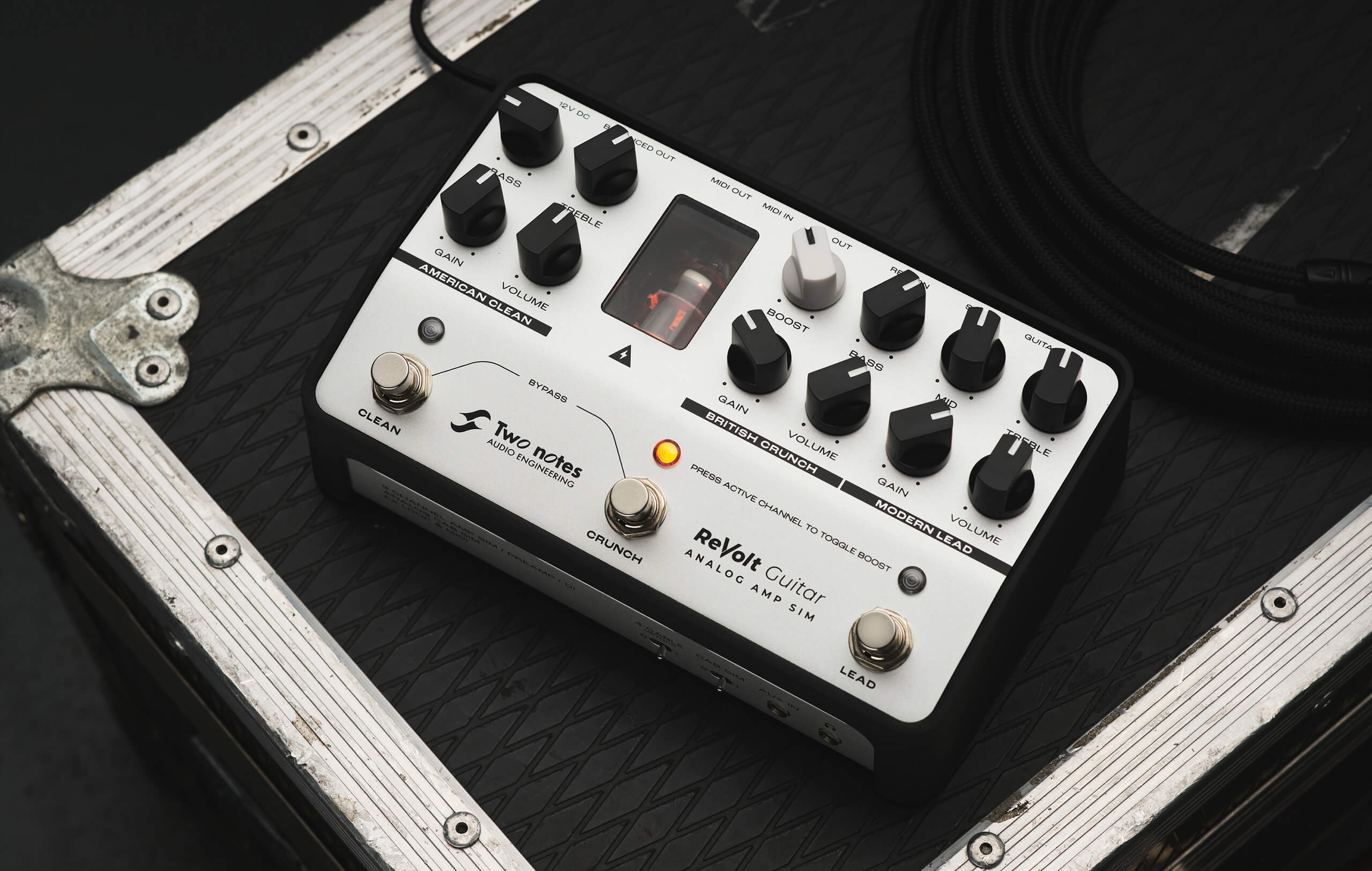 With a fully analogue valve-driven signal path, this versatile preamp promises clean, crunchy and high-gain tones for gigging and recording. It’s definitely not revolting, but is it revolutionary?

A classy all-round studio tool that could also serve as a handy backup for live use.


Sorry, valve amplifiers, but you’re not paranoid – they really are out to get you. And the Two Notes ReVolt Guitar is wading in with a more daunting array of sonic weaponry than just about any amp simulator we’ve seen before.

With three channels, switchable speaker cab simulation and a host of connectivity options, including MIDI and a balanced XLR output, this chunky triple stomper claims to offer all the tones you need for gigging, recording and practice, powered by a real 12AX7 valve. 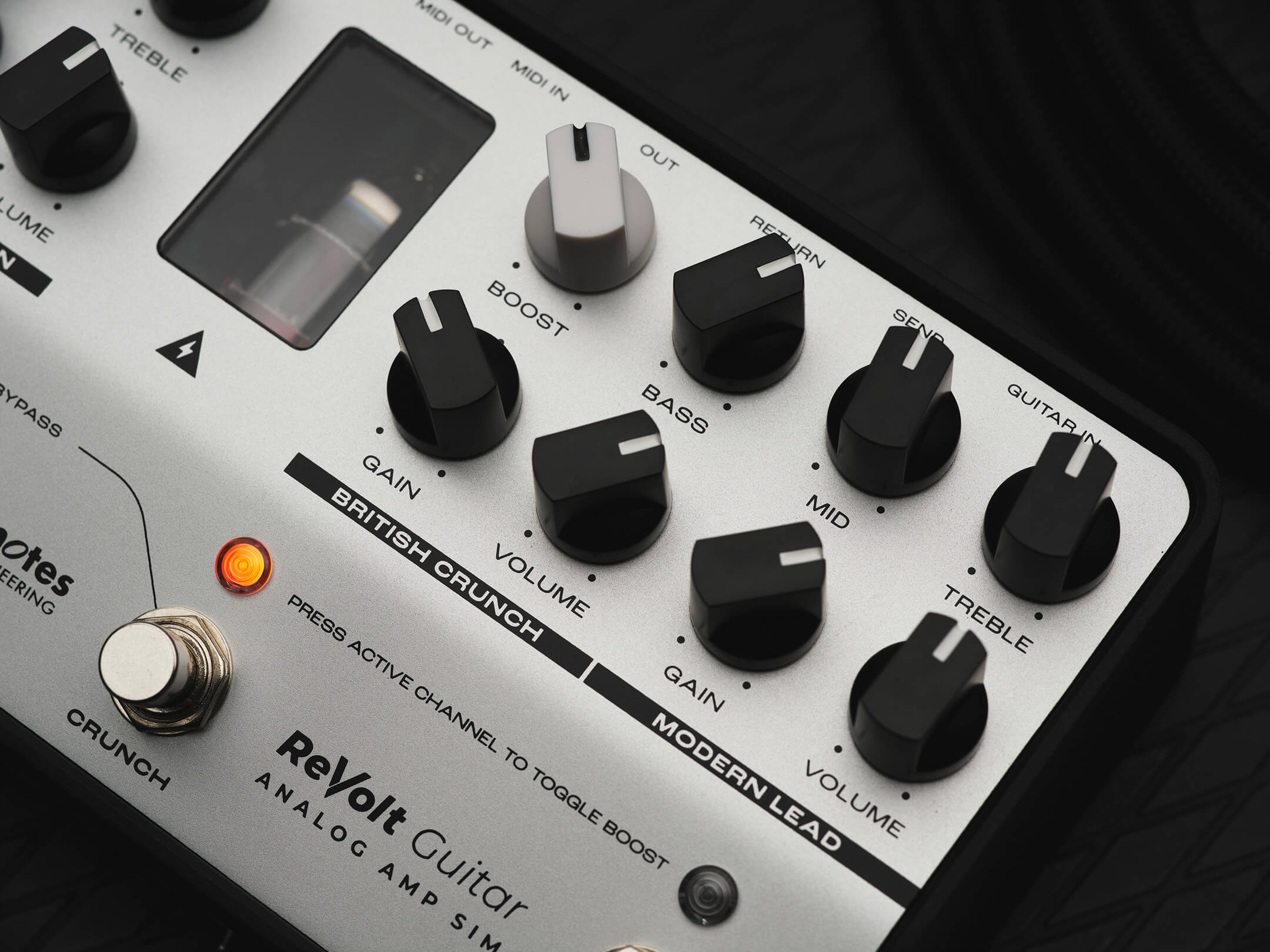 It was the digital brain of the Strymon Iridium that first made life without an amplifier truly feasible, followed by the likes of the Walrus Audio ACS1, the DSM & Humboldt Simplifier… and eventually the return of the Tech 21 SansAmp, an amp sim from the days before amp sims. With the ReVolt Guitar, French brand Two Notes aims to combine the tonal flexibility of those first two pedals with the all-analogue purity of the last two.

Ah, but don’t toss that 100W stack into a volcano just yet. If you turn off the cab simulation you can also use the ReVolt as a tone-shaping, gain-adding, channel-switching preamp in your regular rig. This can be either up front like an overdrive pedal or in your amp’s effects loop, if it has one, with the option of employing the four-cable method for maximum switchability.

If you are going ampless, you have plentiful options. Playing live? Plug straight into the PA using the unit’s onboard cab sim (based on Marshall’s Slash Signature 4×12), or turn it off and go via an impulse response loader such as Two Notes’ own Cab M+. For home recording, you can do the same with your audio interface, or get the speaker part of the sound from your own library of IRs. 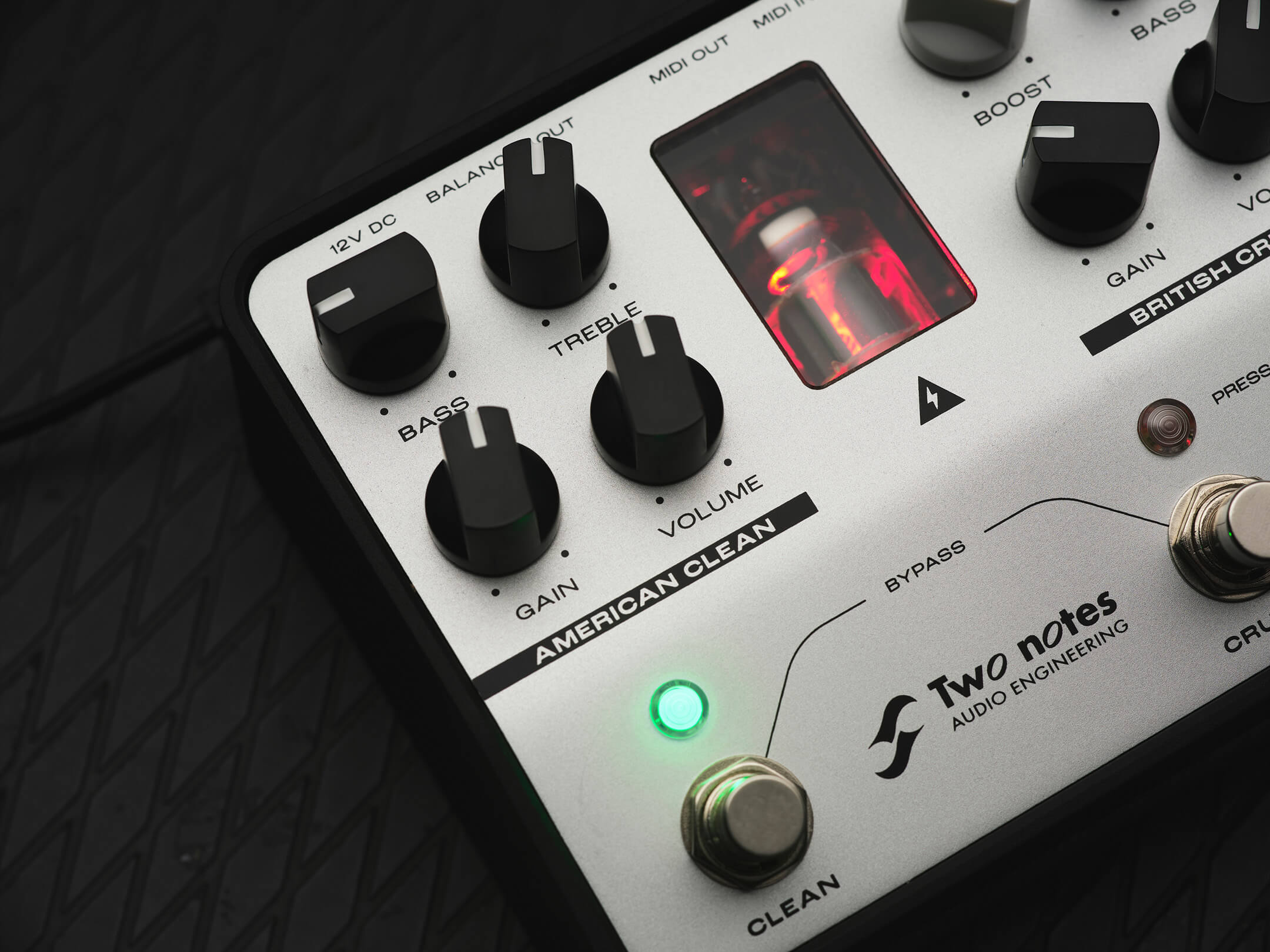 There’s also a headphone port for silent practice, and for ultimate flexibility in the studio you can always use both main outputs at the same time – XLR for direct recording, jack for attacking a real amp.
So, here’s what you’re attacking it with. The control panel of the device itself is mercifully simple, as befits an analogue preamp, and navigating between the three channels could not be easier: tap once on a footswitch to select it, tap again to engage the boost.

First up is the American Clean channel, promising a solid foundation tone that will get on well with your pedals. Two Notes says this is based on an ‘early 70s Californian tube amp’, and the graphic on the website suggests that’s a silverface Fender Bassman. Your controls here are gain, volume, bass and treble.

Next up is British Crunch, which is where the Plexi tones live. On this channel we get gain and volume knobs, plus a three-way EQ section that’s shared with the third option, Modern Lead. Apparently this one is supposed to sound like a Soldano SLO-100 – shredders, djenters and other miscellaneous parent-haters, step this way.

You’ll notice there’s one white knob next to the valve – this controls the level of the boost, and works across all three channels. 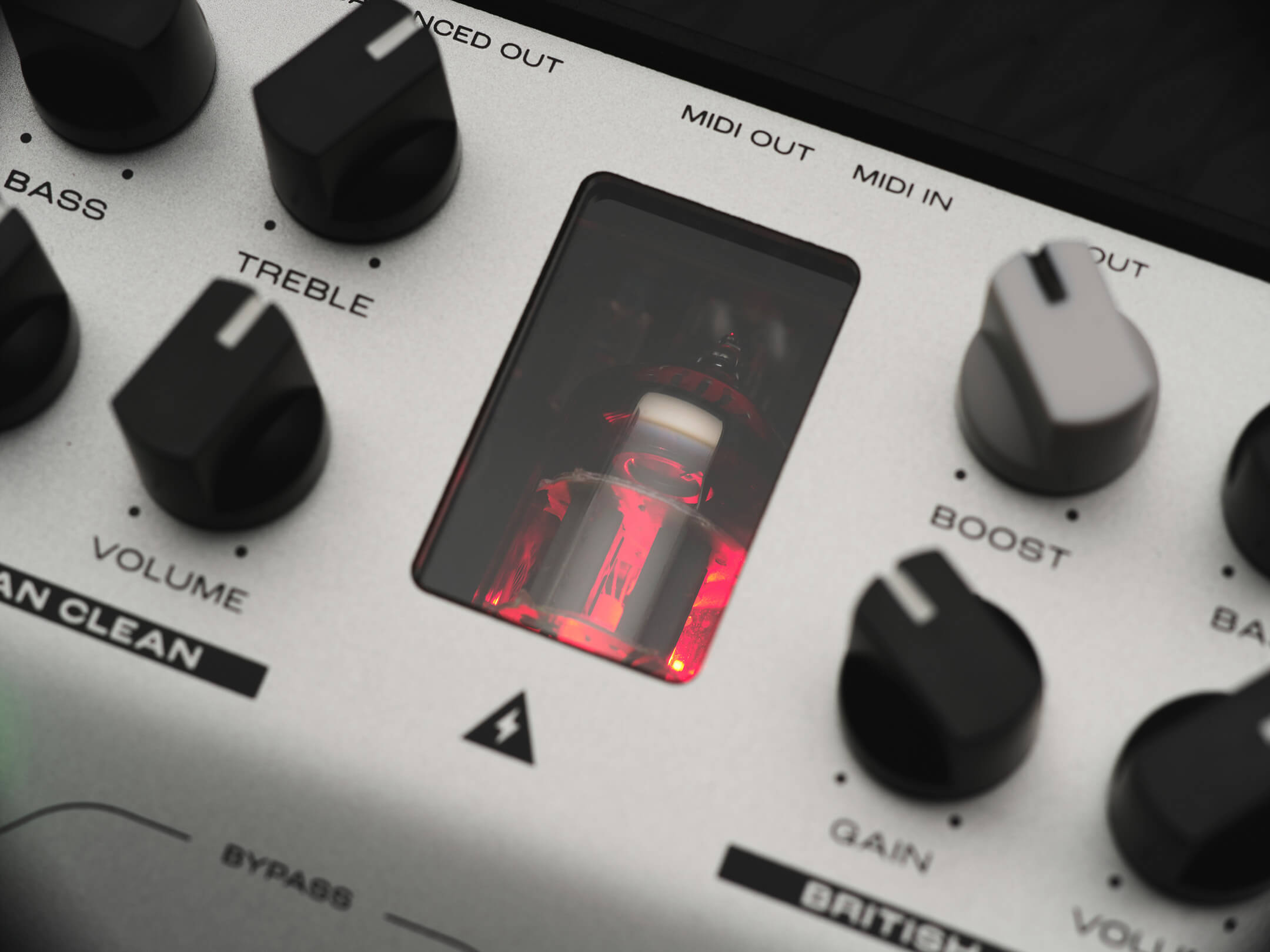 Turning on the power produces a reassuring golden glow from the 12AX7, which we’re told runs at a proper amp-like 200 volts. That’s the only light we see, as the ReVolt wakes up in bypass mode, but when we stomp on the left-most footswitch we’re greeted by a bright green LED… and a dramatic tonal transformation.

To start with we’re running the ReVolt into the front end of our usual test amp, a blackpanel type with a naturally balanced EQ profile, so it’s a surprise just how extreme the difference from bypass is. It’s all about extension – big lows and big highs – and to be honest it’s a bit much. Luckily, plugging directly into the amp’s effects loop return works much better, as this means we’re no longer doubling up on preamps: now the treble remains crisp and eager but the overall tonality is much better balanced.

Engaging the boost brings us a nice bit of natural overdrive, and that’s enough to send us scurrying over to the crunchy channel for more. Things are still plenty bright here, but it’s a sound that’s unmistakably Marshall – and with lots of room for fine-tuning via the three-way tonestack. 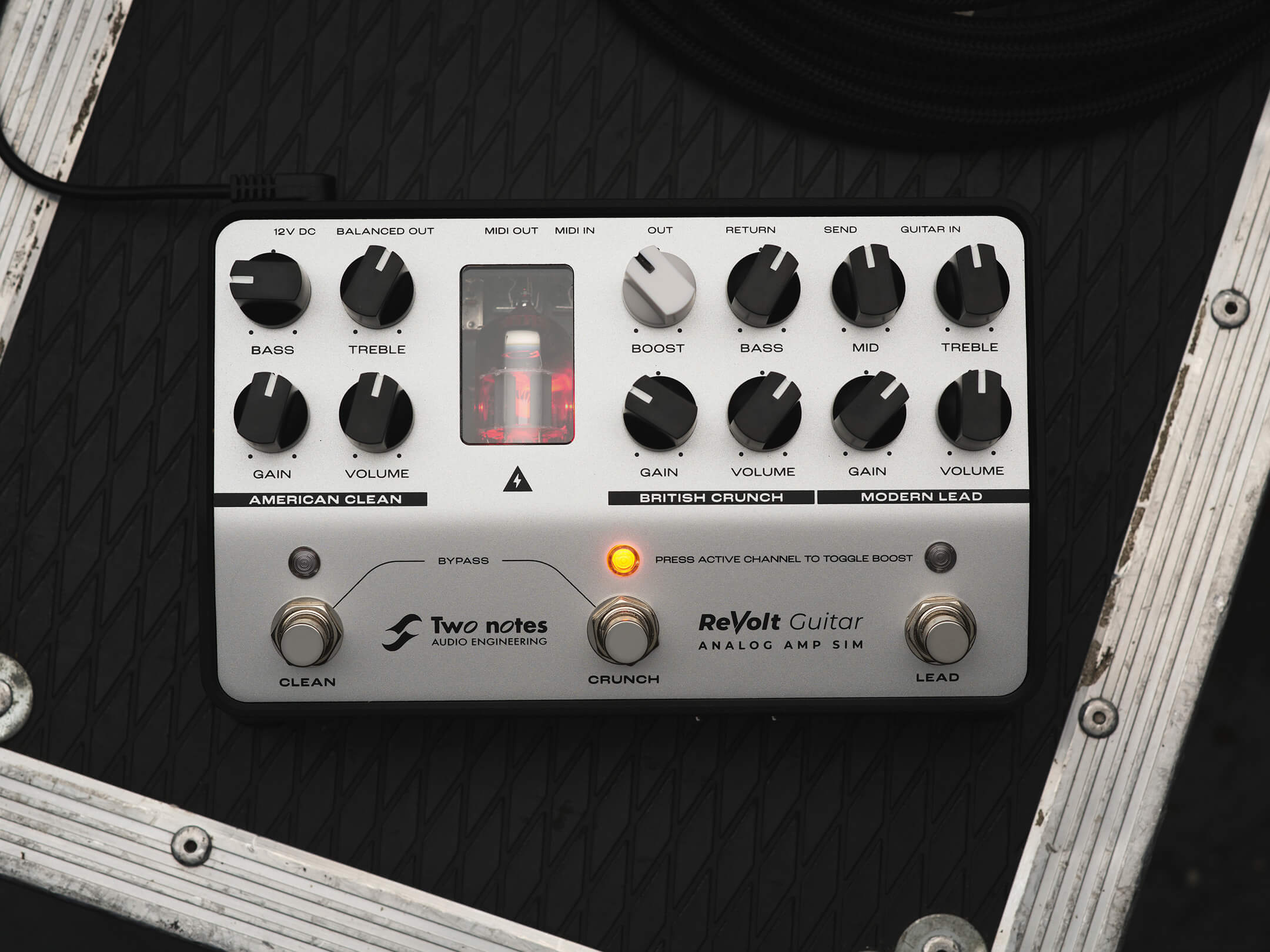 Switching to the lead channel brings another hike in gain, as expected, and a leaner midrange that will suit modern rockers. This is great stuff – the only pity is that you can’t set the mids to be viciously scooped on this channel and pushed on the Plexi one, as the tone controls are shared.

Channel-switching itself is pretty seamless, although we do sometimes hear a loud pop when switching back to the clean channel from one of the overdriven ones – a pre-production issue that we’re assured will not affect the units being shipped out to retailers. It’s also a shame the boost (indicated by a red LED in the valve window) doesn’t stay engaged when you move from one channel to another, though you can change this in the MIDI setup menu.

And now, after reassuring our amplifier that we still love it, we turn to the direct options. Even from a quick blast through the headphone output, it’s clear that this is where the ReVolt is happiest: like Lana Del Rey, it was born to DI.

Using the unit’s own analogue speaker simulation, the clean tones from the XLR output are almost entirely free of the plastickiness inherent in direct-recorded guitar, with some real warmth to the low end. That’s a decent enough start, followed through by some mighty overdriven sounds that will surely do the job in a live setting – but for under-the-microscope realism we really need to dump that modelled Marshall and go digital. 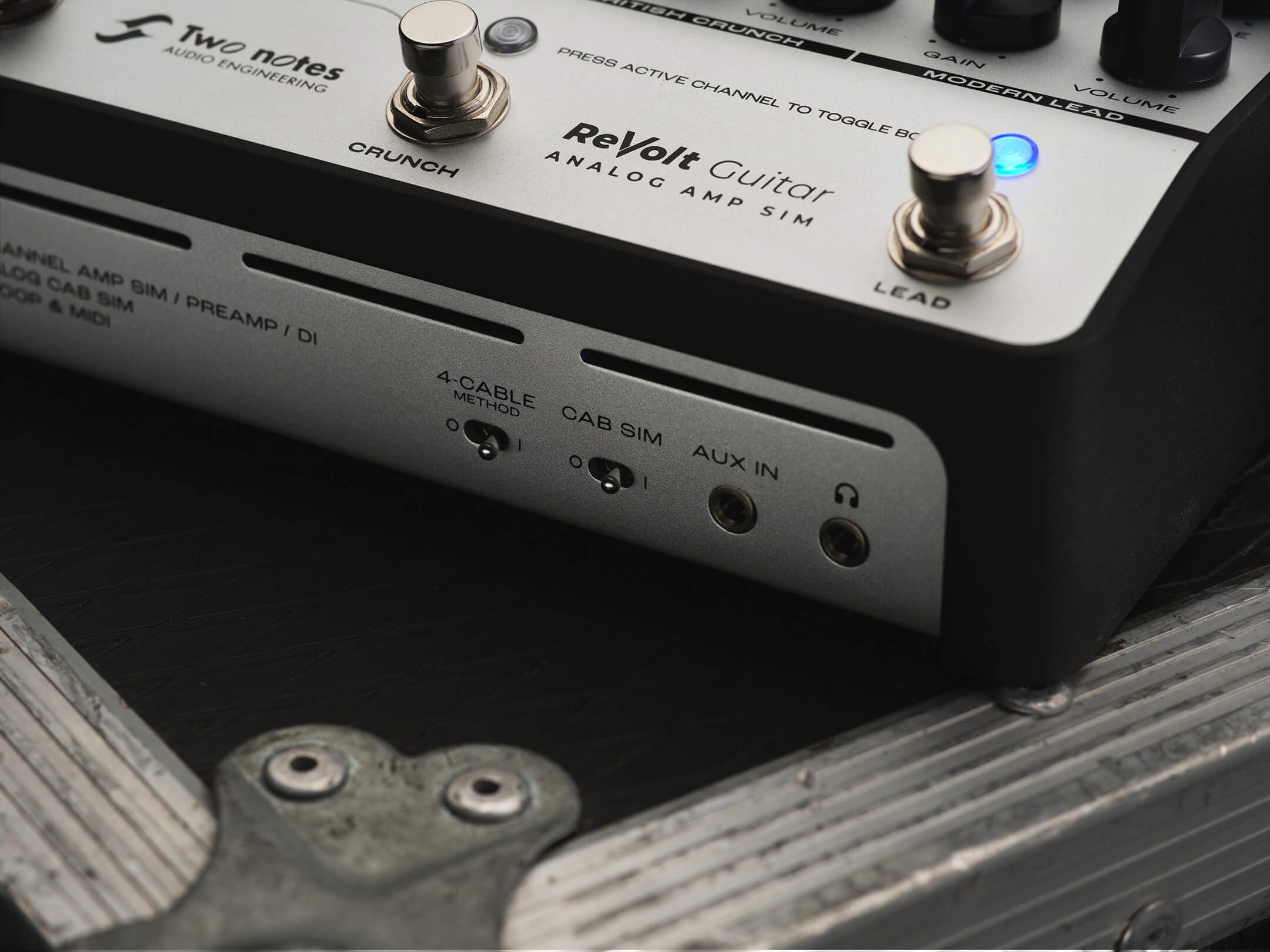 Not used to working with impulse responses? Register your ReVolt and you can download 10 freebies, along with the Torpedo Wall Of Sound plugin that you’ll need to use them. This is a seriously powerful bit of software, letting you tweak everything from mic distance to midrange contour, and delivers top-quality results; but you’re not obliged to install it if you’re happy with your existing IR collection.

If you are looking for a way to record big rock tones without having to live with a half-stack that weighs more than your car, this unit running through a good IR will get you there with easy efficiency. The crunch channel sounds extra-tasty when boosted, and gets on equally well with single-coils and humbuckers, while the really heavy stuff over on the right-hand footswitch is rich and snarly, Wall Of Sound’s Mesa-style 4×12 model providing all the doomy bass shunt you could wish for.

The clean channel sits a little more comfortably paired with something in a Fender or Vox flavour, but there are no rules here; and of course, the real beauty of going dry is that you can experiment with different virtual speakers and mic arrangements long after you’ve recorded that perfect take.

The Two Notes ReVolt Guitar feels like a product designed by hard rockers rather than chirpy popsters, and it’s arguably better used as a replacement for your amplifier than as an old-school stompbox. If both of those things are cool with you, its arrival could be good news for your next recording… and extremely bad news for your amp. 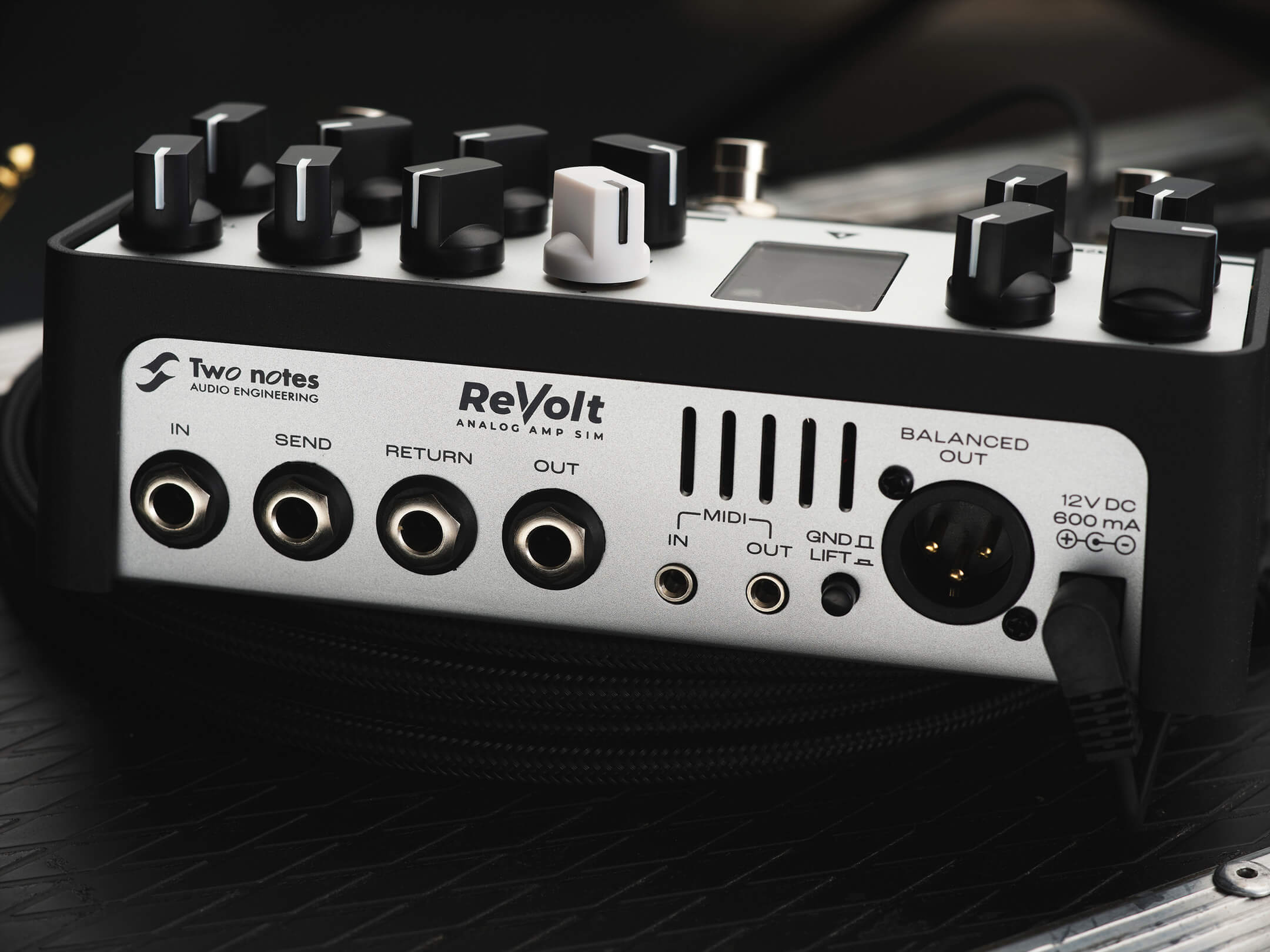