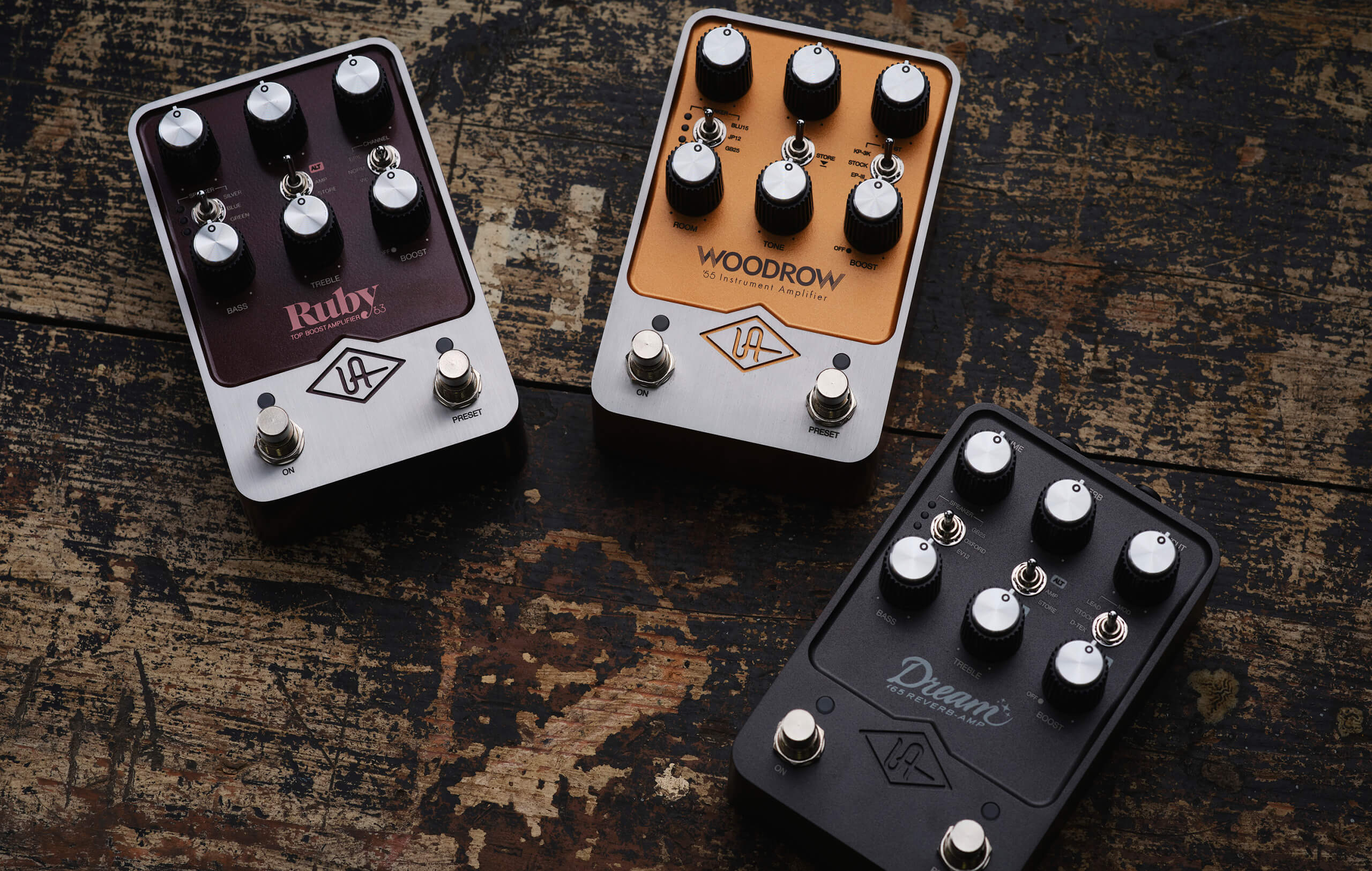 A year after its debut effects pedals landed with promises of unparalleled sound quality, UA is back with three units that make equally lofty claims for amplifier modelling.

Universal Audio’s arrival on the stompbox scene last year caused enough ripples to capsize a small yacht. So the big question was, what would those ambitious Californians do next? And here’s the answer: exactly what you might have expected them to do in the first place.

While the Starlight Echo Station, Golden Reverberator and Astra Modulation Machine represented a leap outside of UA’s comfort zone, these three new devices are closer to its usual territory – namely studio gear. The Dream ’65, Ruby ’63 and Woodrow ’55 are digital amp emulators that claim to capture the mic’d-up tones of three classic valve combos with new levels of authenticity. So you can plug straight into your DAW for recording, or into the PA at gigs… and upcycle your favourite amp into a coffee table.

Should the Strymon Iridium and Walrus Audio ACS1 be worried? Possibly, but there’s a key difference: while those two rivals each allow you to flip between Fender, Marshall and Vox models, UA’s approach is to specialise – one pedal, one amp.

That has allowed these compact stompers to cram in more amp-specific features… but given that each one costs £345, it also means covering all those core tones will set you back a grand. Weren’t planning on going on holiday this year, were you?

And there’s another twist: that legendary Marshall crunch is not on the menu. While the Dream models a mid-60s Fender Deluxe Reverb and the Ruby is all about the Vox AC30 of the same era, the Woodrow steps back a decade to another Fender, namely the 5E3 Deluxe. So long, plexi addicts; welcome aboard, tweed fans. 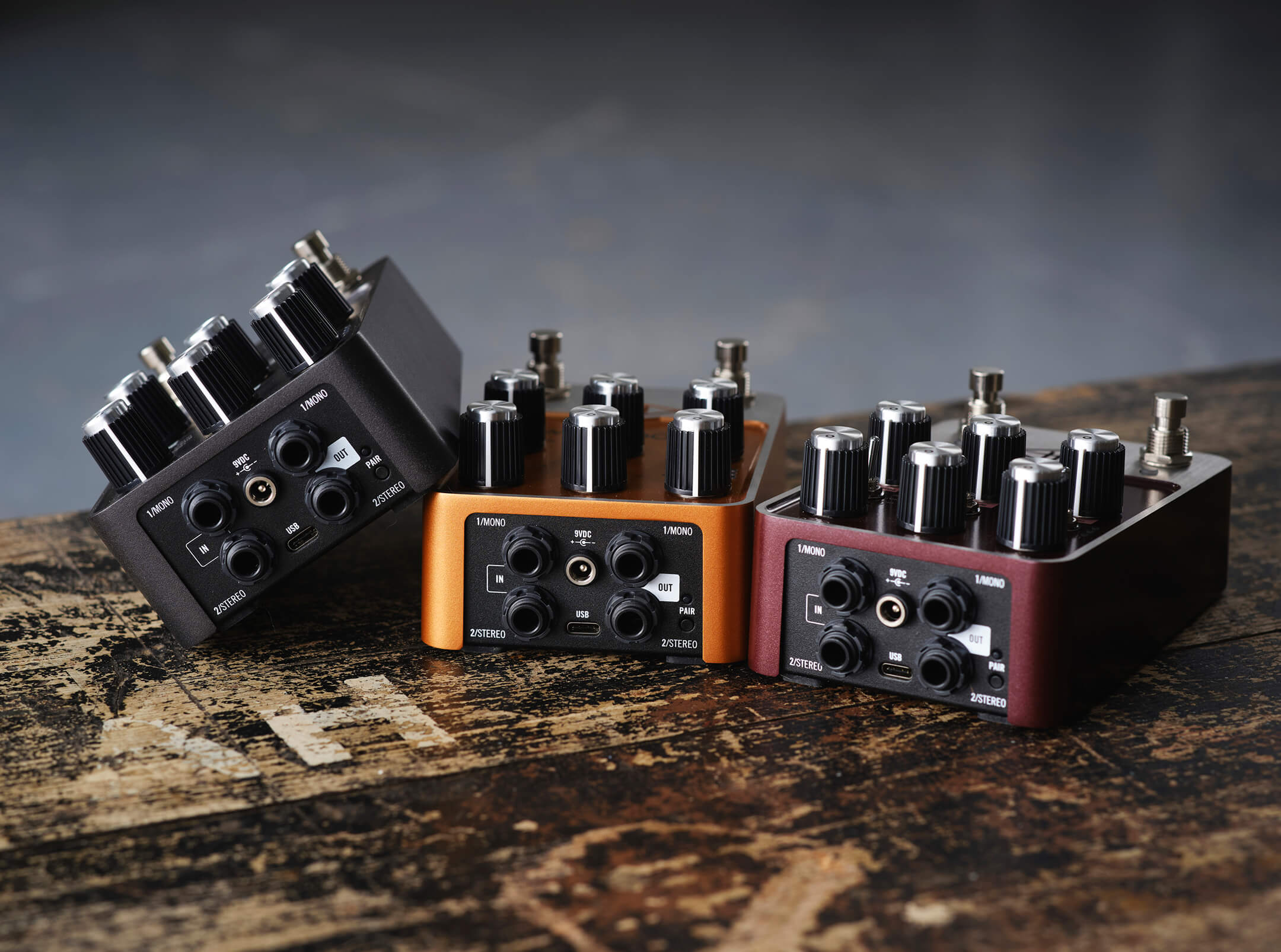 Design-wise, these pedals follow the template of last year’s trio: chunky metal enclosures with two footswitches, six knobs and a row of toggle switches across the middle. They’ll run on a standard nine-volt power supply, but you will need 400mA of current for each one.
There’s a straightforward ‘live’ operating mode, but once your phone is paired up over Bluetooth the UAFX app allows you to load presets – some ‘factory’, some ‘artist’ – from an extensive library.

Presets can of course be edited, and you can also use the app to reassign the footswitches, which is handy – if you don’t think an amp emulator needs a bypass switch, you can set it to engage a gain boost instead.

Before we dive in, let’s just flag up a few points that apply across the range: the pedals take about 15 seconds to boot up; Bluetooth connectivity is slightly flaky (at least for now); and there are no headphone outputs.

There’s also no MIDI, and the words ‘made in Malaysia’ mean you’re not getting the cachet of proper boutique kit here; but the basic build quality feels nicely hefty – and besides, what you’re really paying for is the sound quality offered by UA’s algorithms. Hit the links below to find out if these unabashedly high-end emulators live up to their price points.