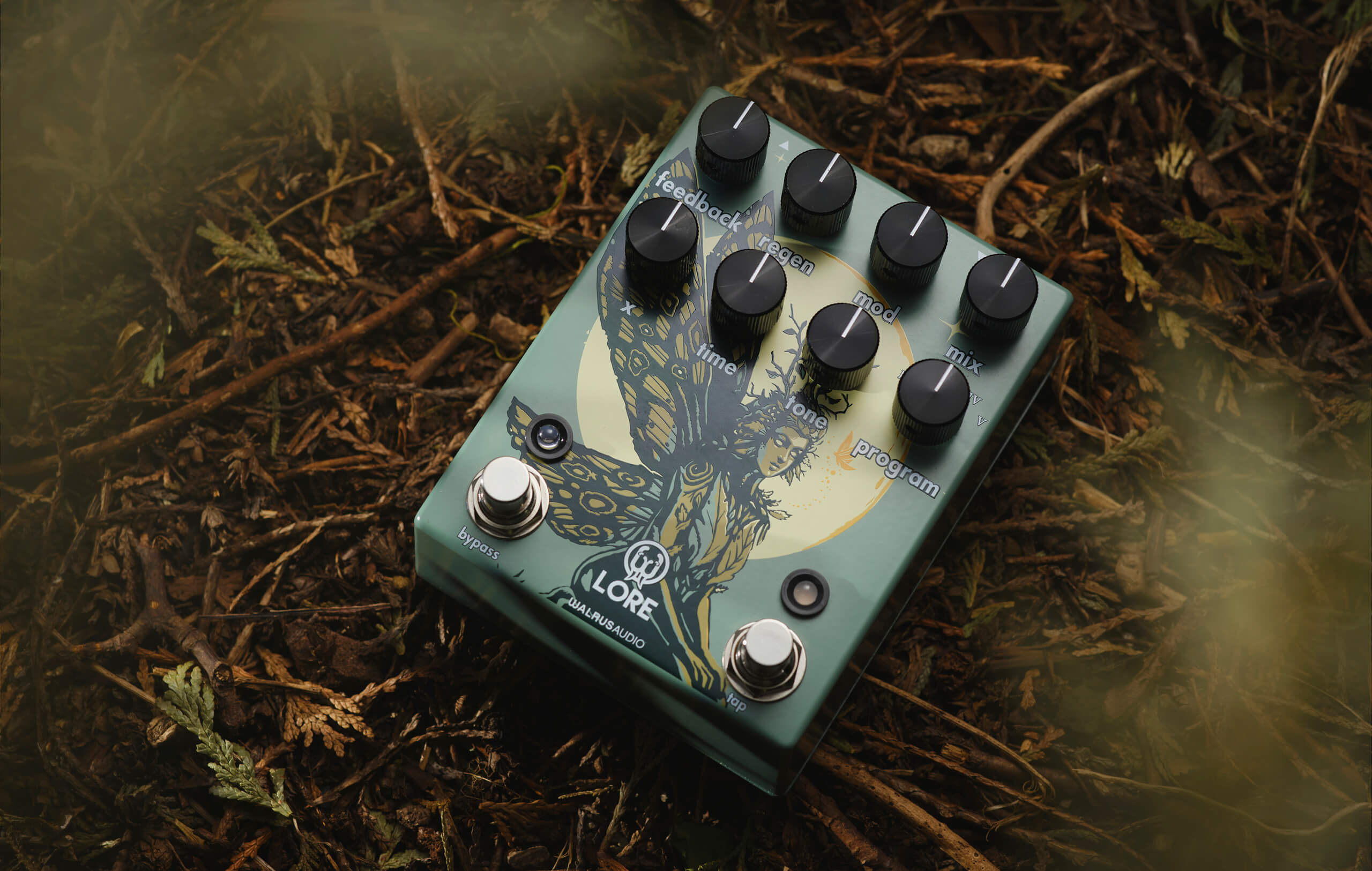 Not so long ago, if you wanted to create blissfully atmospheric echo textures you had to chain 15 delay pedals together and suspend them from the ceiling of your nearest cathedral. Now it’s easily done with two or three well-chosen digital stompboxes… or maybe even just the one?

Pedal makers have cottoned on to the current trend for epic washes of ethereal mystery – not to mention ethereal washes of epic mystery – and the Walrus Audio Lore is the latest attempt to serve it all up in a single box. In this case, that means five different combinations of delay and reverb that go heavy on reverse effects and pitch manipulation.

So what sets the Lore apart from its rivals, other than the phenomenal wingspan of that otherworldly mascot on its smoky green enclosure? According to Walrus, it’s all about overlapping analogue feedback paths that interact organically, allowing the two halves of the circuit to build off each other. Basically this means the output of the second effect feeds back into the first one. 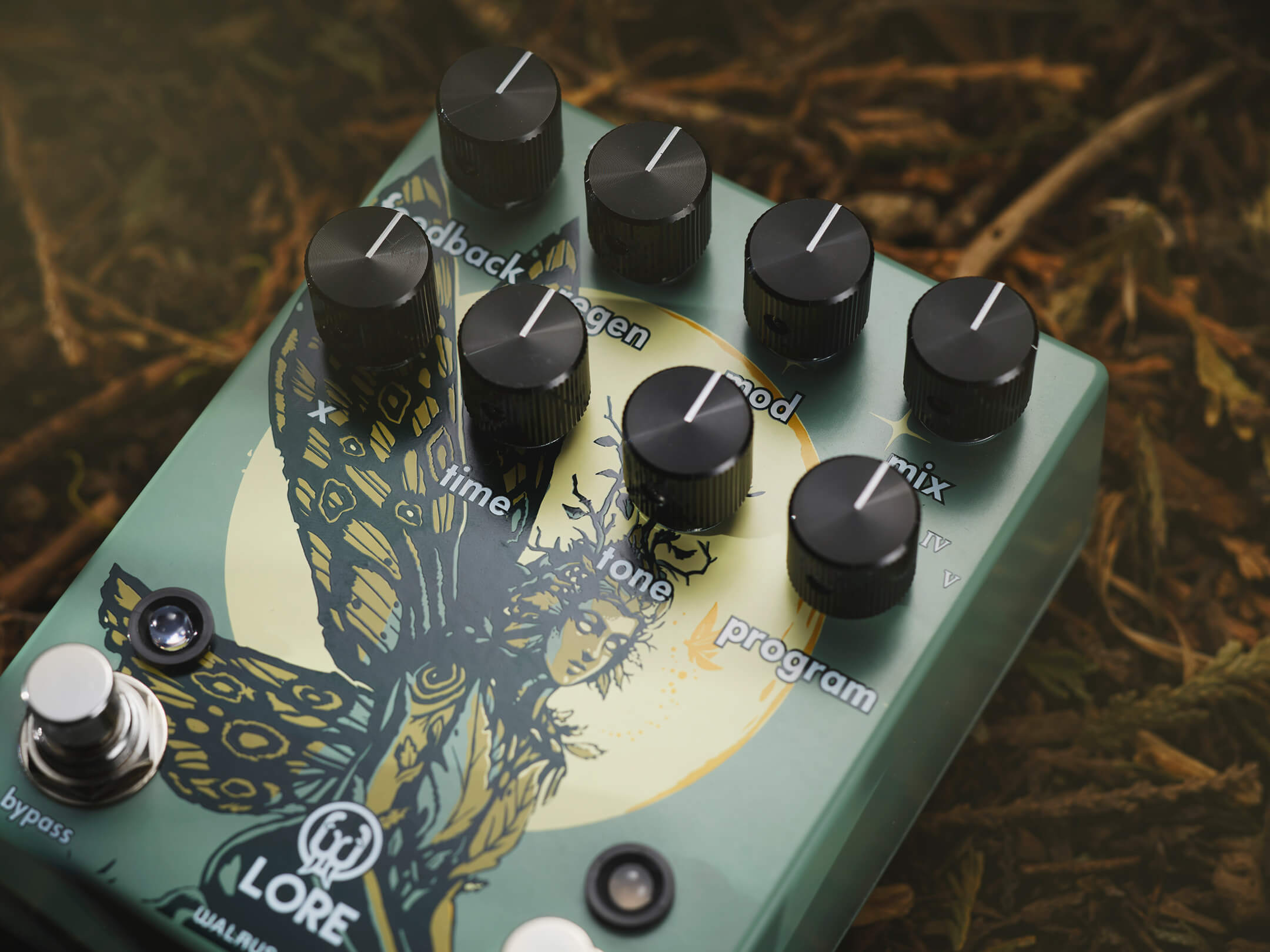 Even from the outside, the single set of controls – and single bypass footswitch – make it clear this isn’t just two separate pedals sharing a box. In theory, it should be a lot more interesting than that.

Of the other seven controls, only the two at top-right have the same function no matter which mode you’re in: ‘mod’ lets you adjust the amount of modulation applied to the wet signal, while ‘mix’ changes the wet/dry blend. 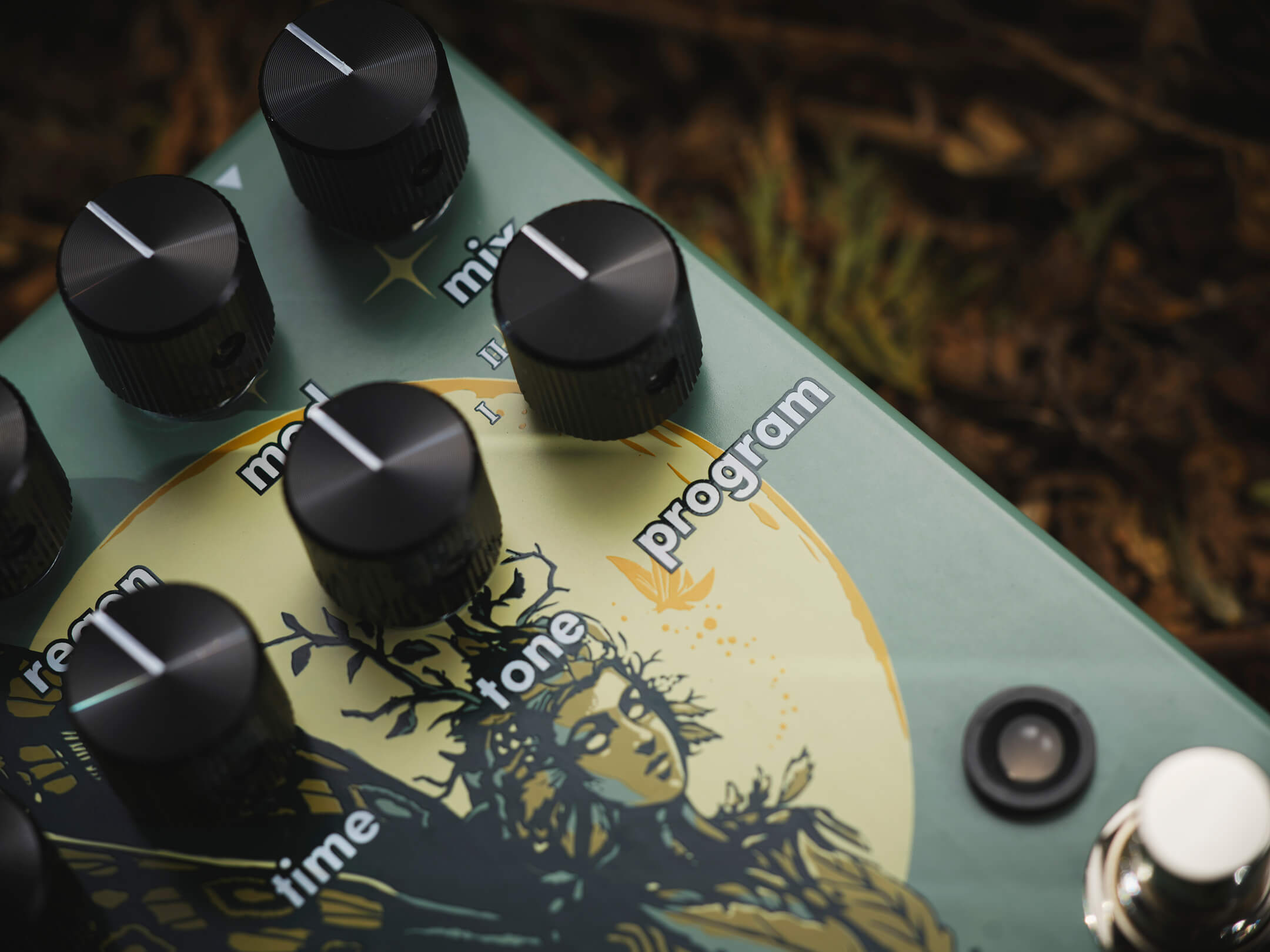 Other than that, we can say that broadly speaking ‘feedback’ applies to the first half of each effect pairing and ‘regen’ to the second, while ‘tone’ affects an EQ filter of one kind or another and ‘time’ controls the delay interval or, in the all-reverb fourth mode, the stretchiness of the decay. That just leaves the enigmatic ‘X’ knob, a multi-function free agent that we’ve already seen on a number of Walrus pedals including the Fathom and Slo reverbs.

There’s one more feature to mention before we saddle up that dragon and begin our fantastical explorations: holding down the tap-tempo footswitch sends the clock rate rising up to double speed – or diving down to half, depending on your chosen setting – until you let go, at which point it springs right back. 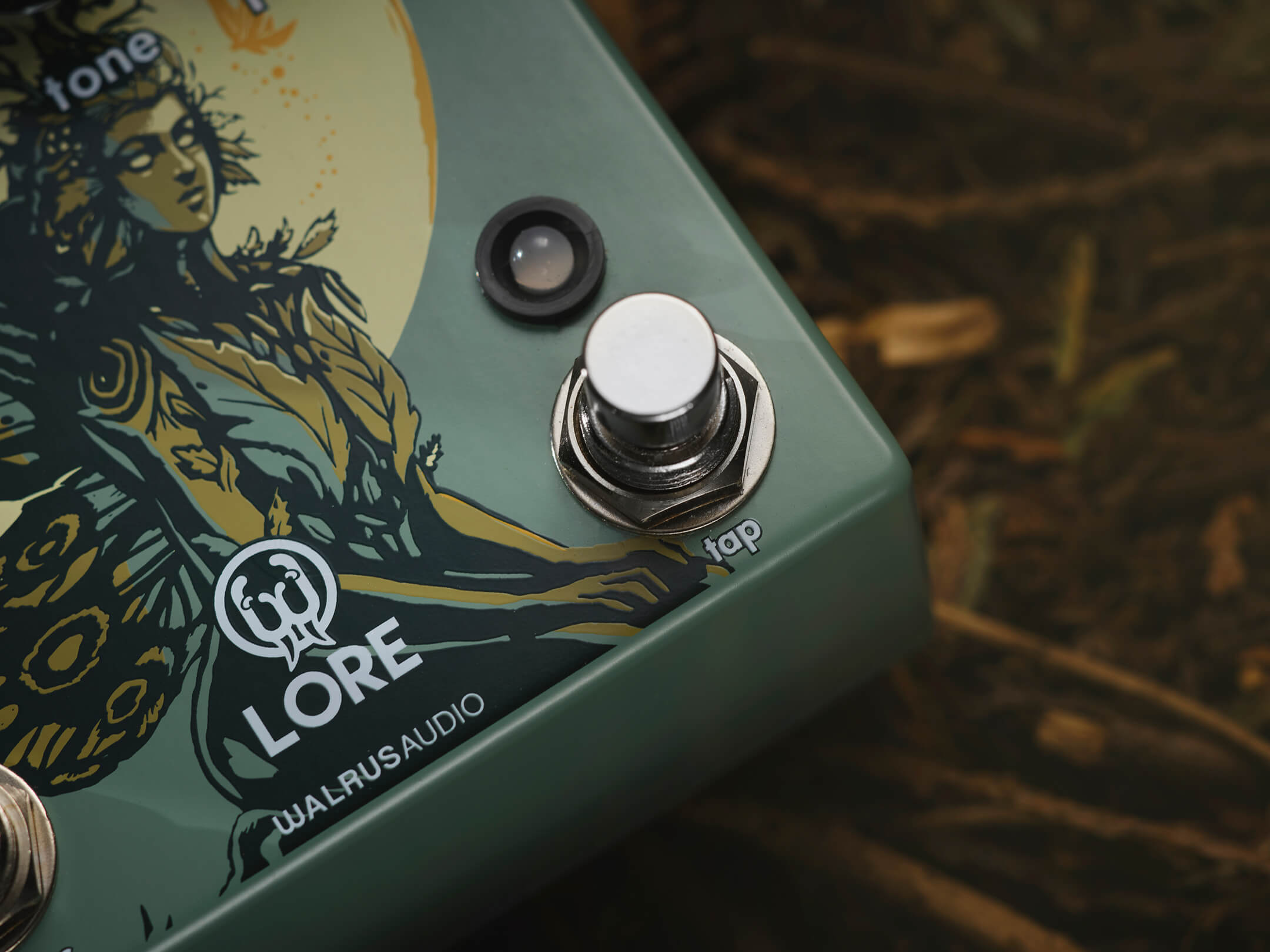 Tempted though we are to leap straight into the sonic whirlpool, let’s be just a little bit responsible and start off by getting our bearings in the shallows. We begin in the first mode – reverse delay into reverse reverb – with the mix set low and everything else around halfway. And it sounds… quite nice, actually.

If you’ve used either of this pedal’s two most obvious competitors, the KMA Cirrus and OBNE Minim, you’ll know that pedals of this type tend to generate a fair amount of hiss – and that’s certainly the case here. But if you can live with that, the smeary blend of reverse delay and gently rising reverb makes for a pleasant background ambience, especially with plenty of modulation.

The hiss gets more oppressive as we turn the mix knob, but now we’re getting into the kind of territory where you’re likely to be making too much noise for that to be an issue anyway. Cranking the feedback and regeneration to maximise our decay times, we complete the transition from cuddly to cosmic. The mix has to be up around two o’clock before we hear a noticeable drop in the level of the dry signal, and by now the swirly stuff is really starting to cascade.

It’s never totally overwhelming, though – in fact, there’s a surprising dynamism to these dreamscapes. Pick gently and it’s still soft and fluttery, but then dig in for a big chord and a wave of wobbly, overloading hugeness will rush back at you about a second later.
Mode two is, if anything, even better: the up-octave adds a layer of spaciness, but there’s so much going on in those feedback loops – and what comes out is so mashed up and grimy – that you don’t have to worry about the unnatural ‘whistling’ often associated with shimmer reverbs.

Flipping to the down-octave mode swaps airiness for moody density, and there’s nothing wrong with that, but it’s round about this point that the inspiration starts to dry up ever so slightly. The ‘reverb on reverb’ mode is nicely smooth and can be further jazzed up with upper and lower octaves, while the twin pitch-shifting delays can create some distinctly unearthly arpeggios; but it’s clear by now that we’re dealing with five variations on the same basic idea – and as that idea is all about mushy blending, it’s perhaps inevitable that (pitch delays aside) the Lore’s many voices seem to merge into one.

This means the effect of tweaking those mode-specific controls is often somewhat less than transformative, while the tap footswitch’s rise/dive function doesn’t help much – the way the pitch moves is not very musical and we struggle to imagine anyone finding this as useful as, say, an infinite hold feature.

What might be a bigger concern for some is that this is not a stereo pedal. Yes, most of us are still playing through mono setups, even when recording, but there’s something very special about the sheer immersiveness of a good stereo reverb – and that extra dimension is something these dreamy washes are crying out for.

That aside, it’s supposed to be a reverse soundscape generator and that’s exactly what the Lore delivers. If you like the idea of turning your every chord into some sort of thunderous epiphany, this pedal will take you there.