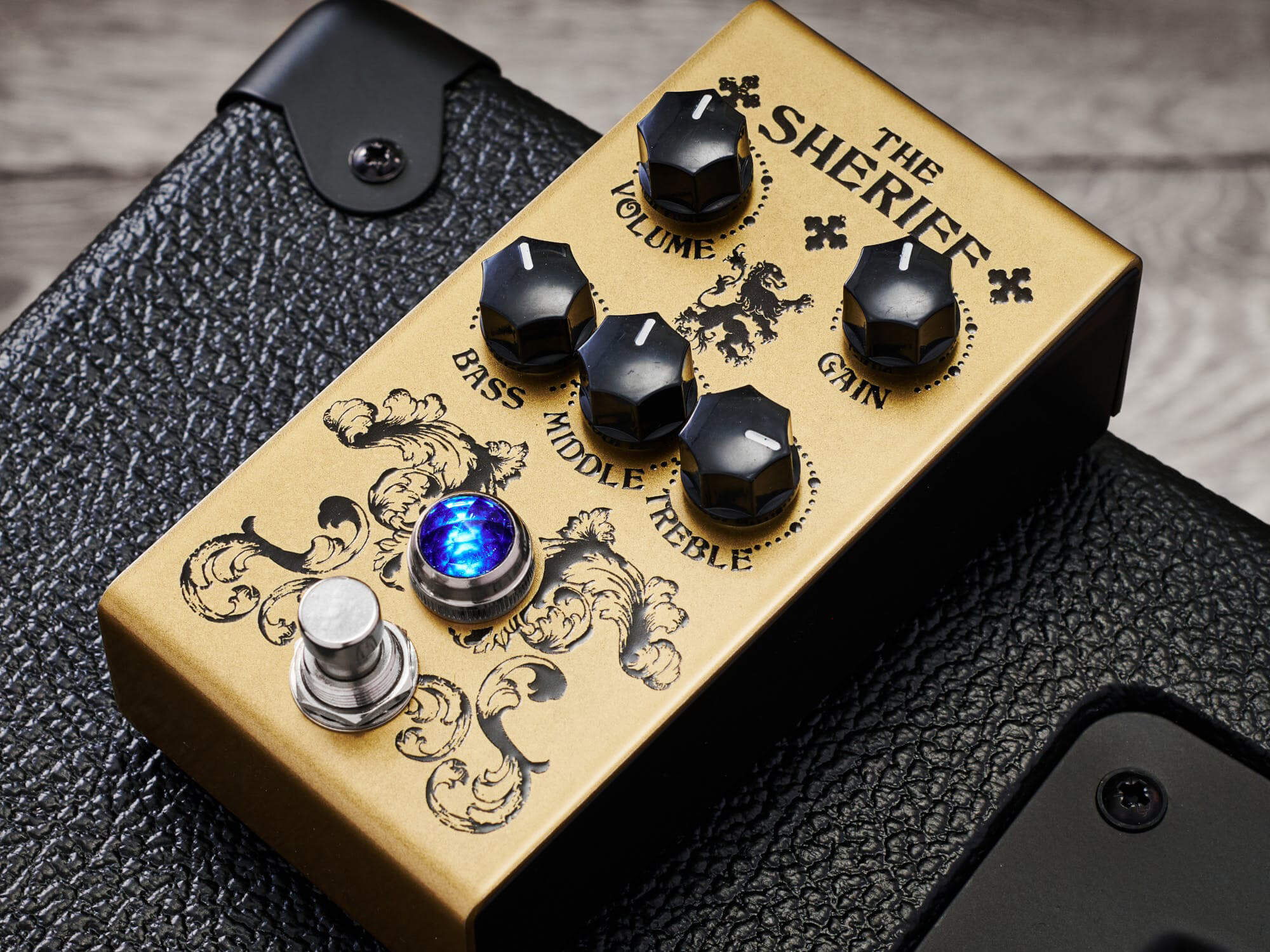 Easy to use and eminently versatile, this distortion pedal will find a spot on even the most cluttered pedalboard.

It seems like everyone and their mum is doing the ‘amp-in-a-box’ trick nowadays and Victory Amps recently unveiled their lineup of classic amp-inspired stompboxes. Designed in collaboration with British boutique builder ThorpyFX, it appears this is another iteration of a big amp gone small – but hold that thought, because these pedals aren’t quite what you might first think.

The lineup consists of five new stompboxes, each based on Victory Amps’ Duchess, Jack, Kraken, Sheriff, and Copper. Handmade in the UK, these pedals aim not to replace their namesakes completely, but instead to offer up a flavour of each, allowing you to augment the sonics of your existing pedalboard further or just reshape the tonality of your amplifier. 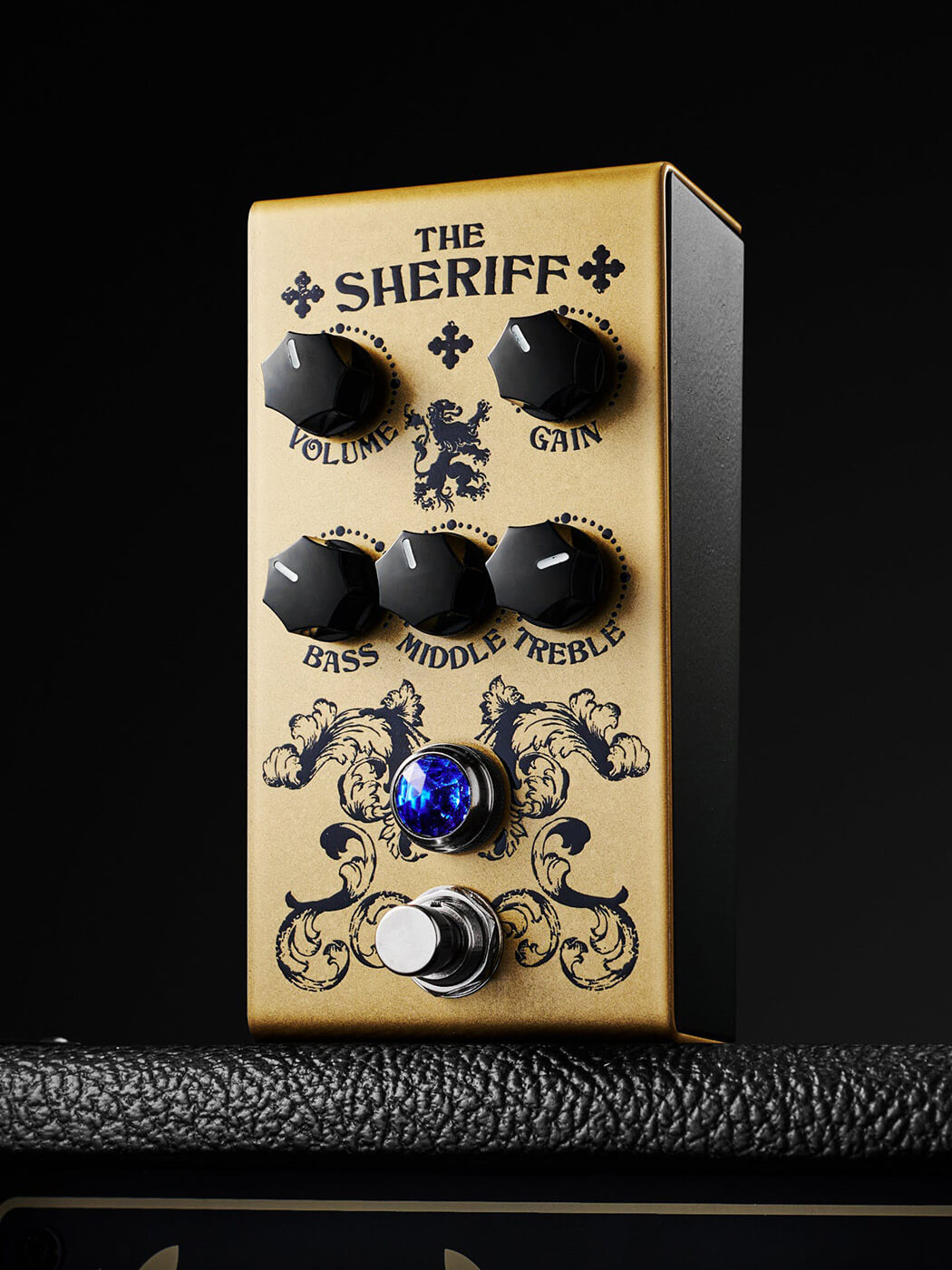 We were delivered the V1 Sheriff; based on Victory’s Plexi-inspired amp that does everything from 60s Blues to 80s hair metal. It’s housed in what feels like a substantial unit; gold coloured like the bastion of British tone it takes its inspiration from. The large blue LED is flanked by ornate black patterning, with a rustic font spelling out its name and a barbary-inspired lion in case you weren’t quite sure of its heritage.

We’re given five knobs to play with, with volume and gain being pretty standard for any distortion pedal. We’re also treated to three individual EQ knobs for bass, middle, and treble, and it’s this section that’s the exciting part of this stompbox. Victory and Adrian Thorpe laboured tirelessly over the impact that these mini-pots would have on your sound sculpting, so let’s find out if their hard work was worth it… 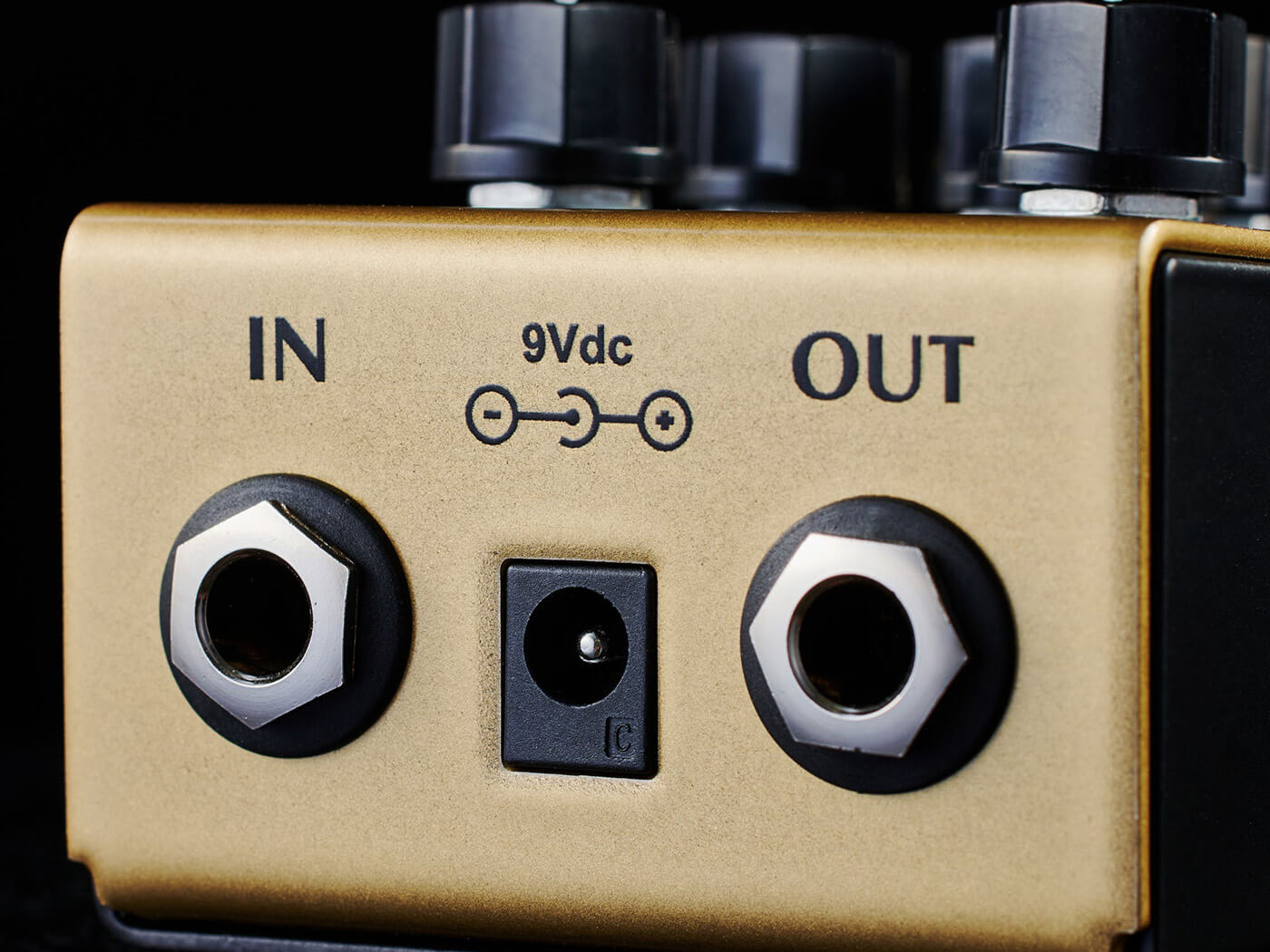 Plugging in our trusty Stratocaster and placing the V1 Sheriff in front of a small tube combo with the EQ set to neutral, we set about dialling in that aforementioned 60s Brit blues-rock sound. One nice touch is that when you get in close to tweak the settings the big blue LED isn’t set to ‘burn your eyes out’ – so getting that Hendrix Little Wing tone is a doddle. Soon after that we’ve got our thumb over the neck for some hybrid lead and rhythm embellishment action, all glassy warmth with a pleasing crunch.

The gain knob cuts off before we can get a pure clean tone, so it won’t quite get you to The Wind Cries Mary territory, but it certainly does a great impression of Hendrix’s dirtier tones and sounds great with some hybrid-picked riffs and pentatonic musings. Since we can’t turn the gain knob down any further, we opt to go the other way and see what awaits us. 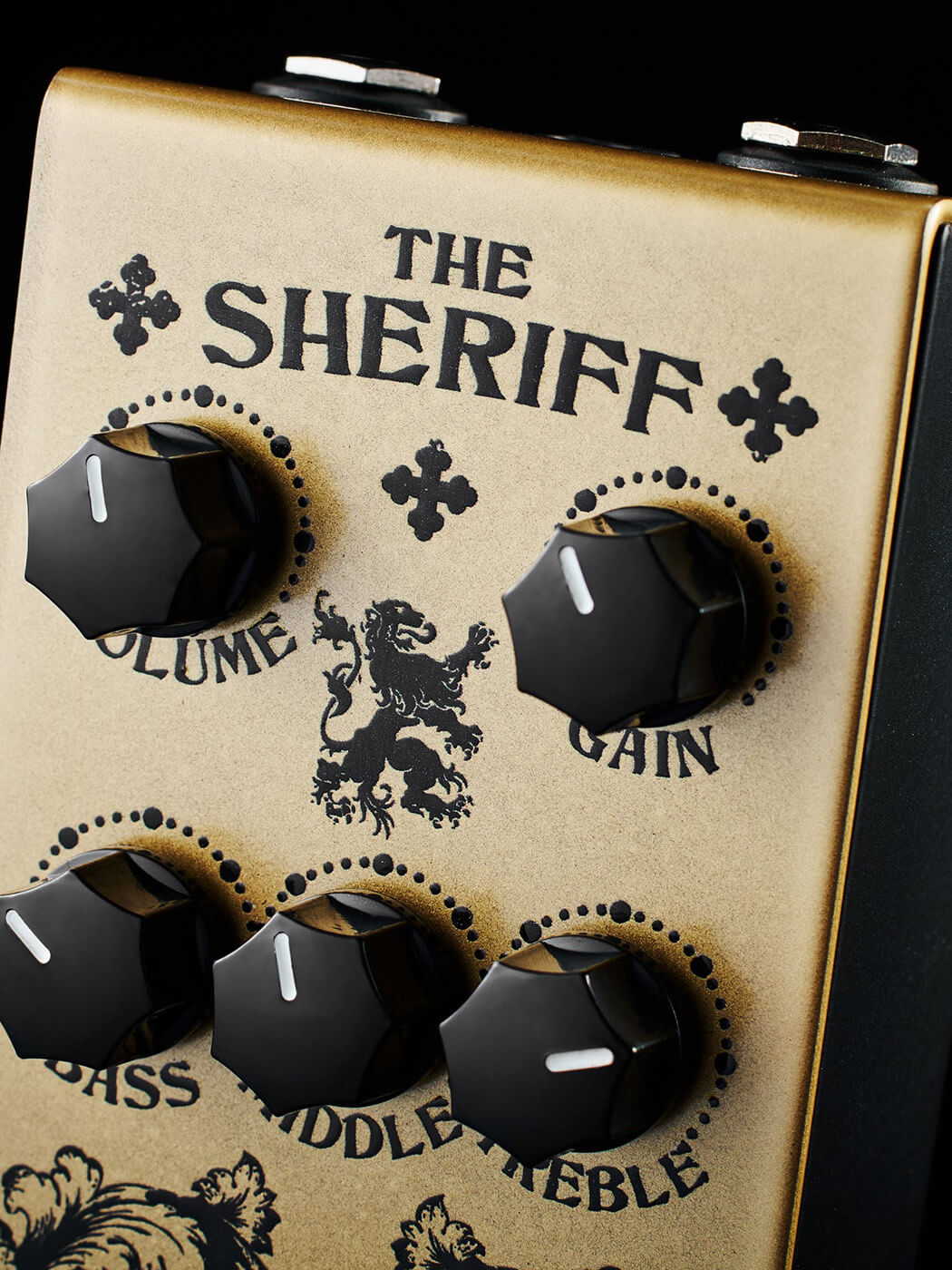 Swapping to a humbucker-equipped S-type guitar and a beefier 2×10 tube combo, we dial the gain to 12 o’clock and take a step into the hard rock realm. It’s a sound that begs for double stops and power chords, with some properly searing lead tones that really make those legato runs and two hand tapped neoclassical licks scream. From 12 o’clock onwards we don’t notice quite as much of a change as the first half turn, but with mids scooped it all gets a bit Seek & Destroy, which leads us nicely onto the crux of this pedal.

We used it with a bunch of different fuzz and distortion pedals and always found a way to make them play nice together, which isn’t always possible, particularly with some of the nastier fuzz offerings out there. Without the three individual EQ knobs, the Victory V1 Sheriff would probably feel like many other distortion stompboxes; it does crunchy to distorted tones and does them well. But with the flexibility of the EQ section, what you get is something that’s versatile enough to fit into pretty much any rig. 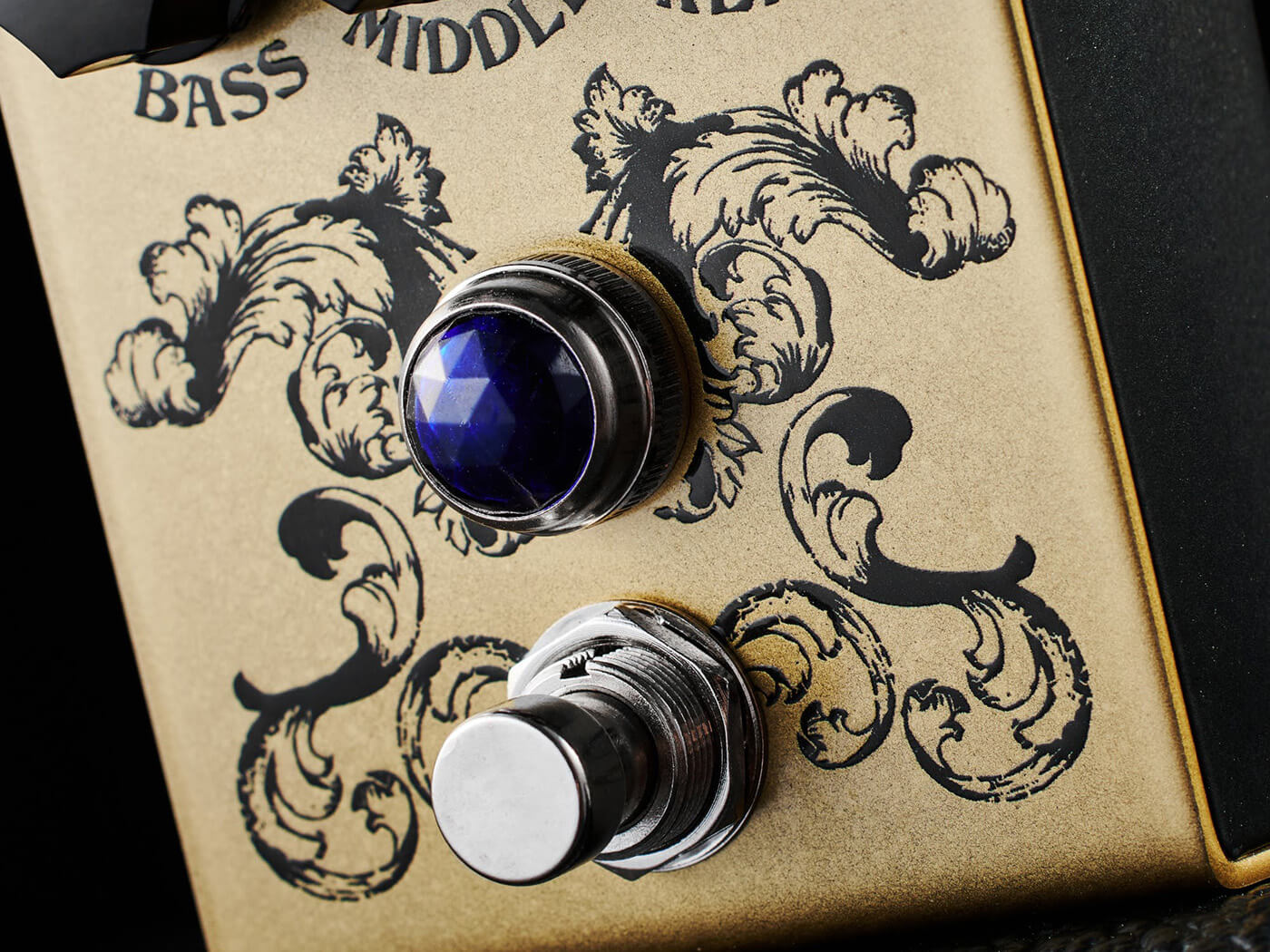