If it comes down to a choice between a tank of petrol and a Zoom multi-FX with looper and a tuner, the winner is obvious. Review by Marcus Leadley. 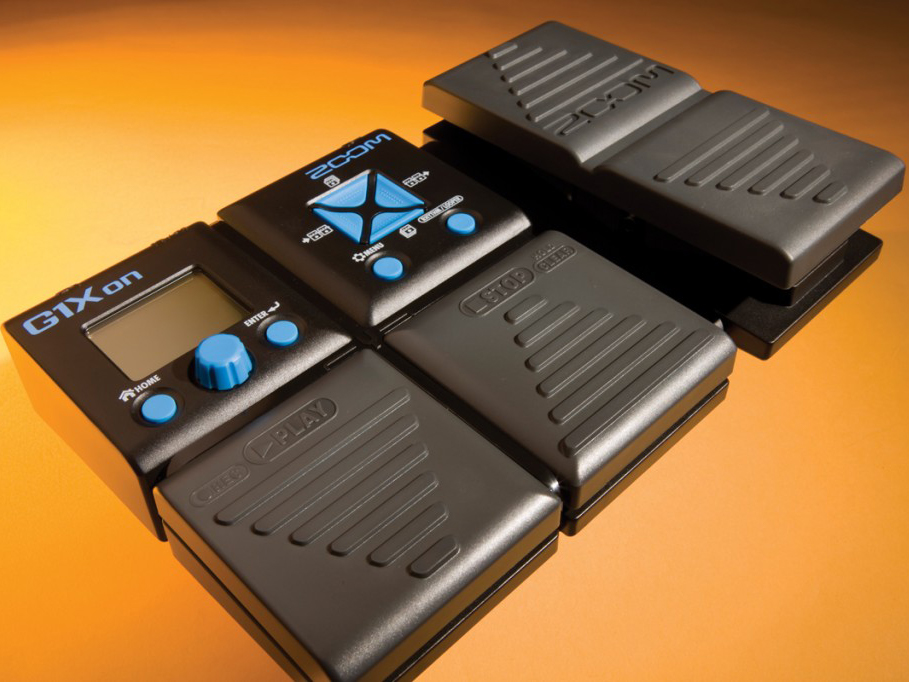 In a world where you can easily spend £200 on a single-use boutique stompbox, the idea that you can get pretty well every available guitar effect from a single unit costing a third of this sounds insane. Yet Zoom has gone and done it – and it’s not the first time the company has offered such extraordinary value for money. What’s even more surprising is the fact that the basic G1X without the expression pedal and its related effects is a mere £49. Now, budget multi-FX are generally aimed at the beginner’s market where the promise of more for less has obvious appeal.

However, things have kind of reached the point where you no longer have to compromise completely on sound quality. Add to this the fact that years of development has ironed out the kinks when it comes to internal routing, flexibility and simple interface design, and a little box like this can be very handy if you’re a seasoned pro.

So what do you get for your money? You get 58 effects: noise gate, graphic EQ, distortion, booster, tremolo, chorus, pitch shift, ring modulator, delay and reverb – and 22 amp simulations. Many are modelled on famous name pedals, and each is a separate stompbox-style module. You can tweak parameters using virtual knobs and switches accessed using a few basic key combinations. You can chain up to five effects together – or four plus an amp simulator – in any order you like, and swap them around to change how they interact.

For convenience and demo purposes the unit comes stuffed with preset patches. There are 10 banks (A-J) each capable of holding 10 patches; any and all of these can be overwritten and you can move patches about to fully customise your new best friend. Oh, and the unit has a built-in looper with a maximum 30-second recording time as well as the ability to overdub countless times using different patches. There are 68 rhythm patterns to play along with. And there’s a tuner that can be set for five open tunings as well as standard. It’s quite an impressive list.

The G1Xon’s appearance is utilitarian and businesslike. The black and dark grey plastics have a heavy duty feel to them and the unit has a metal baseplate. All knobs and buttons are bright blue so they should be easy to see, even on a dark stage.

Connectivity is basic; this is a mono-in/mono-out unit (the out doubles as a headphone socket), so no fancy stereo effects. You can get an optional power adaptor but Zoom claim you can get 20 hours out of a set of four alkaline cells – so off to the pound shop. There’s an auxiliary input so you can play along to an iPod or similar. There’s a USB port too, but it’s only for firmware updating.

To move from patch to patch you use the foot pedals, which will take you up or down through the banks. To bypass the unit altogether, press both simultaneously; this also drops you straight into tuner mode, which is very useful, but you can also toggle through the banks using the up/down cursor keys. There’s a preselect mode that lets you set up a second patch while continuing to play the first… very handy for live playing. 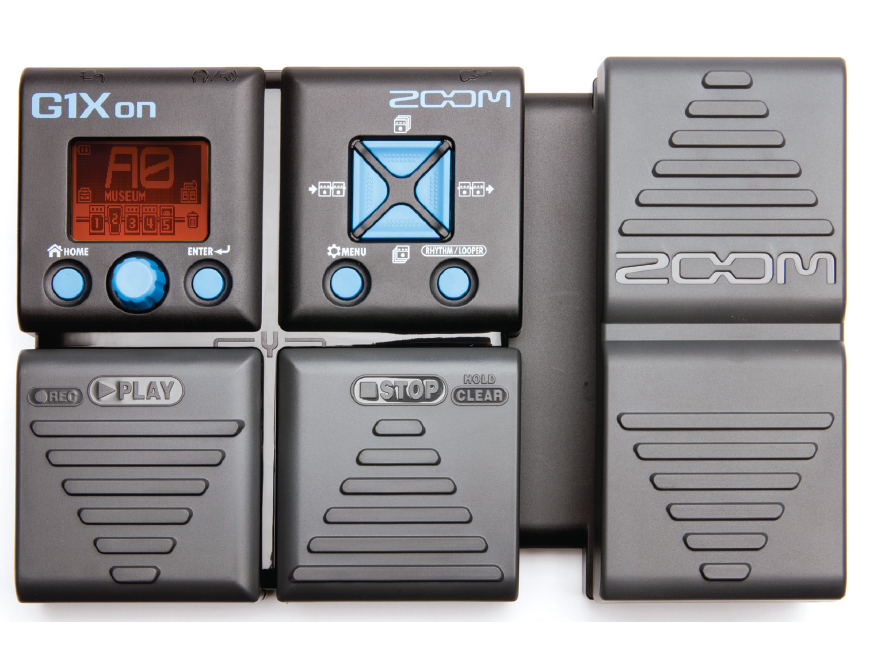 The Menu button takes you to the window where you set the master volume output and other macro settings. Here you need to decide whether you want the unit to save automatically or manually – both approaches have their supporters. All you need to do to change module settings is press Enter, select your chosen module using the rotary control, and then press Enter again to reveal the settings. Move through them using the Cursor keys and press Enter again to select. There’s a separate button to toggle between the Looper and the Rhythm functions. If you get confused at any point, simply press Home, which takes you back to the main window of the patch selected.

Between these extremes, though, are some great basic guitar patches that showcase the real potential of the unit. If you have a nice-sounding amp you’ll probably want to turn the amp sims off and just use the FX potential. Alternatively, this little box will drive a clean power amp very effectively. Amp sims are also very useful for computer recording and these sound great. Spend more money if you want enhanced realism and interchangeable cab sims, but these models capture the spirit of the amps they seek to emulate.

All the effect modules do exactly what they say they will, and the degree of editability is good. In bypass mode the unit does suck a bit of life out of the basic guitar/amp sound so you’re better off either running it thought a switchable effects loop or setting up an A/B box and using two amp inputs if you have them. The expression pedal is a useful addition, and once again you have a fair degree of control over the parameters. The Rhythm function offers a surprisingly wide range of basic patterns covering most styles from rock though country, swing, jazz, funk and punk. You can’t chain patterns to make song structures, but the basic sounds are good as actual drum samples have been used.

There are a couple of basic metronome settings to help you do your homework. The Looper is very simple to operate and you can record with, or without, the drum track, and if you record with Rhythm on to get the timing right you can subsequently turn it off if you like the result enough to transfer it to a computer to work with. It’s a great way to generate riff and song ideas.

Verdict
This super-affordable, super-likeable little multi-FX would be great for a beginner or a more serious player who needs a few multi-style sounds for a covers gig but doesn’t want to throw too much cash at it. It’s also a great little gadget for practicing and songwriting. The format and editing controls are nice and simple; true, the back-lit screen is pretty small, but most will find it adequate. The G1Xon also seems rugged enough to last – but don’t drop a cab on it and expect it to survive. If you don’t need a pedal wah or Whammy-style pitch shifter, go for the basic G1X and save another £20. Bargain! 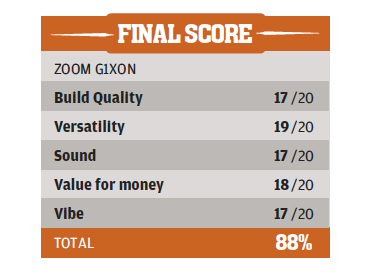