Eko’s Italian connection involves a team of top Italian players and luthiers designing and engineering the various models, which are then constructed in China. 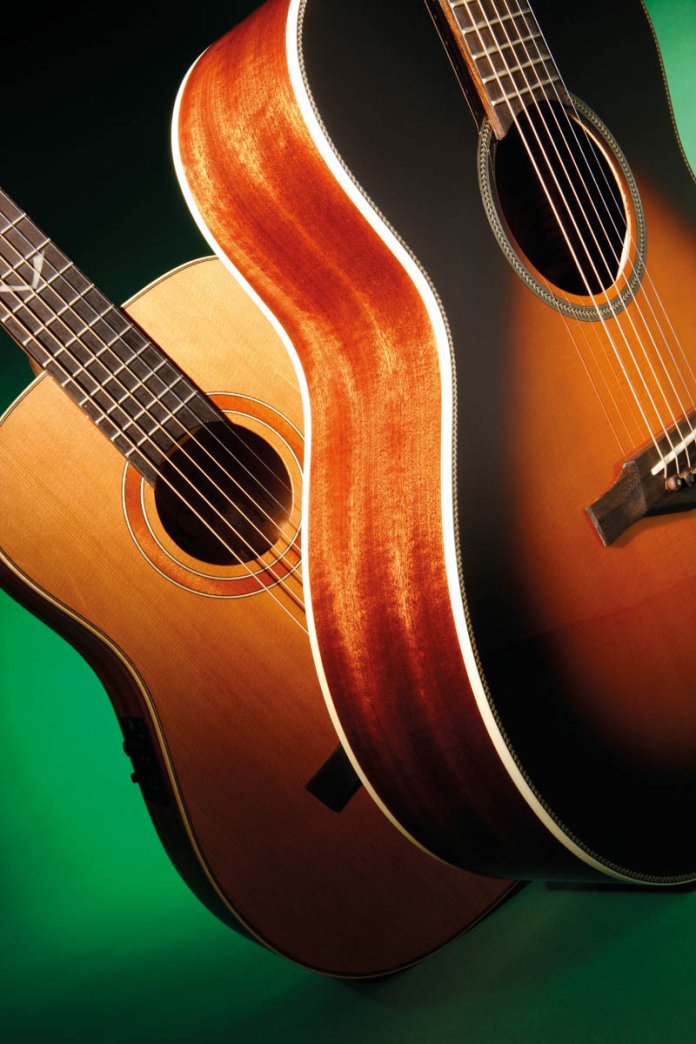 If you learned to play guitar any time from the mid-1960s to the early 1980s then you probably once owned an Eko – or, at least, you knew someone who did.

Many will fondly remember boxy guitars with bolt-on neck joints, outlandish pickguards and the vagaries of Italian tuners, yet Eko acoustics were generally playable and robust guitars that could be relied upon to withstand muddy festivals, decades in squalid student accommodation, and busking. 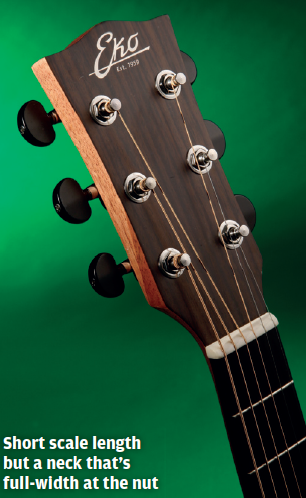 If you are unfamiliar with recent Eko acoustics then the two models we’re reviewing this month may surprise you. Both are well-finished contemporary designs of high build quality. The hardware is modern, the soundboards are solid, and the three-piece necks are carved from solid mahogany.

It’s all rosewood for the bridge, peghead veneer and fingerboard. The fingerboards appear to be rosewood, bound to conceal the fret ends. Faux ebony ‘kidney’ buttons are attached to the chrome diecast tuners, and bone is used for the nuts and for the compensated saddles.

Mini EVO EQ
There is something undeniably cute about travel-sized dreadnoughts, and the phrase ‘small but perfectly formed’ seems apposite here. Fabricated from laminated sapele with a solid cedar top, the Mini Evo’s body measures 39.5cm in length and 31cm across the lower bout.
The overall length is a shade under 90cm and a 22.75″ scale length has been chosen to ensure the Mini EVO will fit in that overhead locker.

Despite its reduced dimensions the Mini EVO is not that much lighter than its Ego ICON stablemate, but maybe that’s attributable to the onboard Fishman Isys+ system and preamp. The control panel includes Volume, Treble and Bass controls along with phase switching and an on board tuner. There’s even a status light for the battery.

Wood bindings are used for the body, with a contrasting band of dark and light wood forming the rosette. An open-pore finish is used all over the guitar, but extra smoothing has been applied to the back of the neck to enhance the feel. 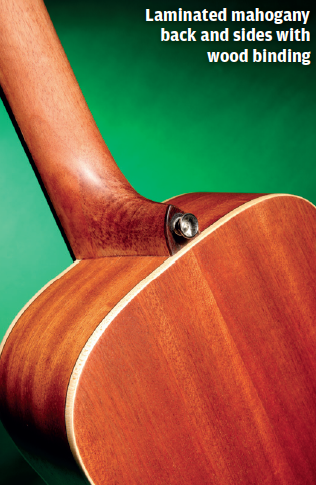 Sounds
It may look like a toy guitar but the Mini EVO certainly doesn’t play or sound like one. Lots of small-bodied guitars have similarly proportioned necks, which can make them tricky for adults to play.

The scale length may be shortened but string spacing at the nut is full-sized and the neck profile fills the hand nicely.

The laws of physics aren’t of much help when it comes to generating loud and deep bass from small-bodied acoustics.

It’s just the same for acoustic basses and even loudspeakers, so it’s unrealistic to demand dreadnought or jumbo levels of thump from travel-sized guitars. The best you can expect is an even string-to-string balance and a treble response that doesn’t dominate everything else.

That’s precisely what you get from the Mini EVO – it’s a toneful little critter with a vibrant, sweet and dynamic response. Cedar was probably a wise choice for the soundboard because it doesn’t have the glassy treble that fresh spruce tops often display, and consequently the treble notes have a softer and more rounded quality with a faintly nylon suppleness when fingerpicked close to the neck.

The bass may not be huge, but notes are certainly strong enough to bolster fingerpicked arpeggios. As a rhythm instrument the Mini EVO will never power a track, but it has more than enough vibrancy to hold its own in solo performance. We’d also expect it to sit well in busy mixes without eating up too much frequency space.

Like pretty much every acoustic of these compact proportions, the Mini EVO’s voice is characterised by its midrange response. Whether you’re picking a quality modern travel guitar like this one, or a century-old parlour guitar, there always seems to be a slightly boxy midrange honk.

It’s just something that goes with the territory, which will suit some styles and tastes better than others.

If you’re looking for chimey and ethereal sounds, look elsewhere. The Mini EVO is a ruder and brasher instrument that is far better suited to picking its way through your blues and ragtime repertoire.

It’s also a very effective and authentic-sounding guitar for playing bottleneck and it handles dropped D tunings with aplomb. 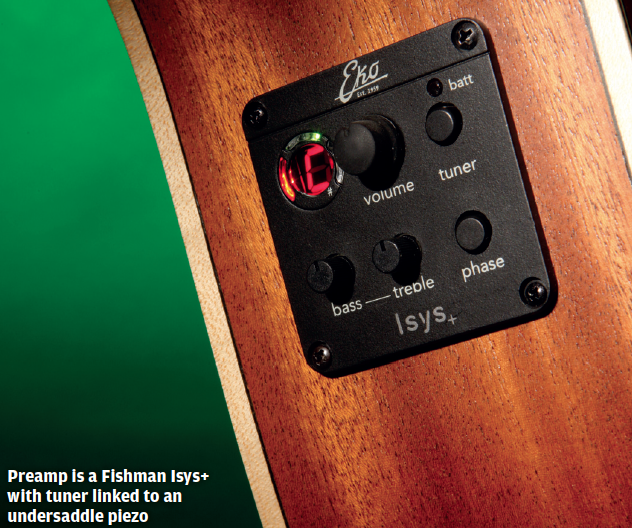 As if that wasn’t enough, there’s the plugged-in tone as well. No wonder Eko put ‘Eq’ in the model designation because the bass and treble controls expand the Mini EVO’s tonal range considerably. You want bass? You’ve got it. You want a brighter or sweeter treble? You can have that too.

The onboard phase switch is there to help cope with feedback, but the Mini EVO is so feedback resistant it’s barely needed; instead, you can flip the phase to scoop the mids for yet more tonal colours.

Standing on stage with this guitar you may make you feel more like George Formby than a J-200 equipped Pete Townshend, but that doesn’t mean you can’t have a serious stab at sounding like him 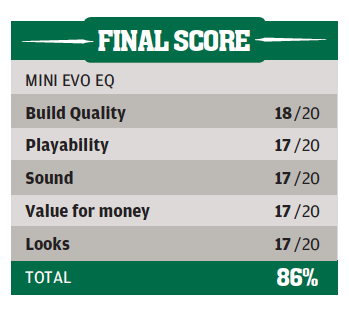 EGO Icon
With a name like this, a guitar is going to need something to back it up. By any standards this is a gorgeous-looking guitar, and by vintage Eko standards it’s downright stunning. We’re contemplating a Martin-style herringbone bound OM body with a sunburst finish that wouldn’t look out of place on a mint ’60s Gibson J45. 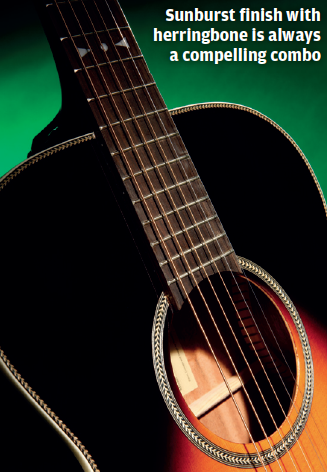 The back and sides are laminated sapele, which is fair enough at this price point.

At least the top is solid sitka spruce, and decoration is kept to a minimum with a herringbone rosette and stylised pearl inlays on the fingerboard and headstock. The whole guitar is finished in a thin and near flawless gloss finish, slightly tinted to enhance the beauty of the wood.

Sounds
Forget the looks, the materials and the price, because this is a glorious-sounding guitar by any standards. If the laminated back and sides compromise the tone in any way, then it’s hard to determine how.

First off, the Eko’s sound is big and loud… but, more than that, it’s one of those guitars that give up their best without being forced at gunpoint to do so. There’s no necessity to press hard on the strings or hit them hard because the response is so freed up that everything seems to flow.

OM’s can sometimes leave you wanting a touch more bass clout but the EGO Icon is not one of those. The low strings provide a chesty thump that encourages you to dig in, and the body shape and size work together to keep everything tightly focused. 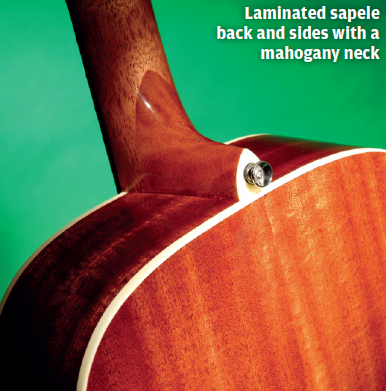 It’s finger-pickin’ good thanks to the full midrange and even string-to-string response. This is a real boon if, like some guitar reviewers, your playing technique isn’t quite as well-honed as it should be.

Floating over the top of everything there’s a spruced-up treble that adds ringing harmonics and shimmery chime. Some playing-in may help to sweeten the top end a little more, but as it stands this guitar is already not far from where you’d want it to be.

OM and 000-sized acoustics are intended to cover all bases and the EGO Icon is just as effective for strong but boom-free rhythm work. The tone is clear and dynamically responsive, but you may notice a slight crashiness creeping in when you hit the strings extra hard.

Verdict
One curious anomaly that may be attributable to Eko’s use of different manufacturing facilities is the variation in neck angle. On the Mini EVO the saddle sits high above the bridge, but the EGO Icon’s low saddle provides very little room to lower the action.
Even so, the playability of both guitars is fine.

Most importantly they sound excellent, but the EGO Icon is the real star of the show. An Italian job well done. 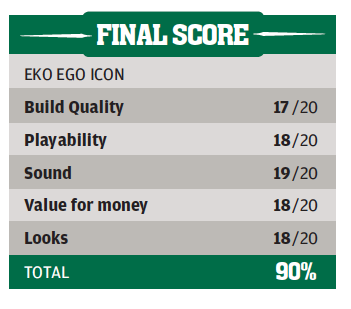