Fender has another stab at fixing some of the notorious eccentricities of its classic offset designs. 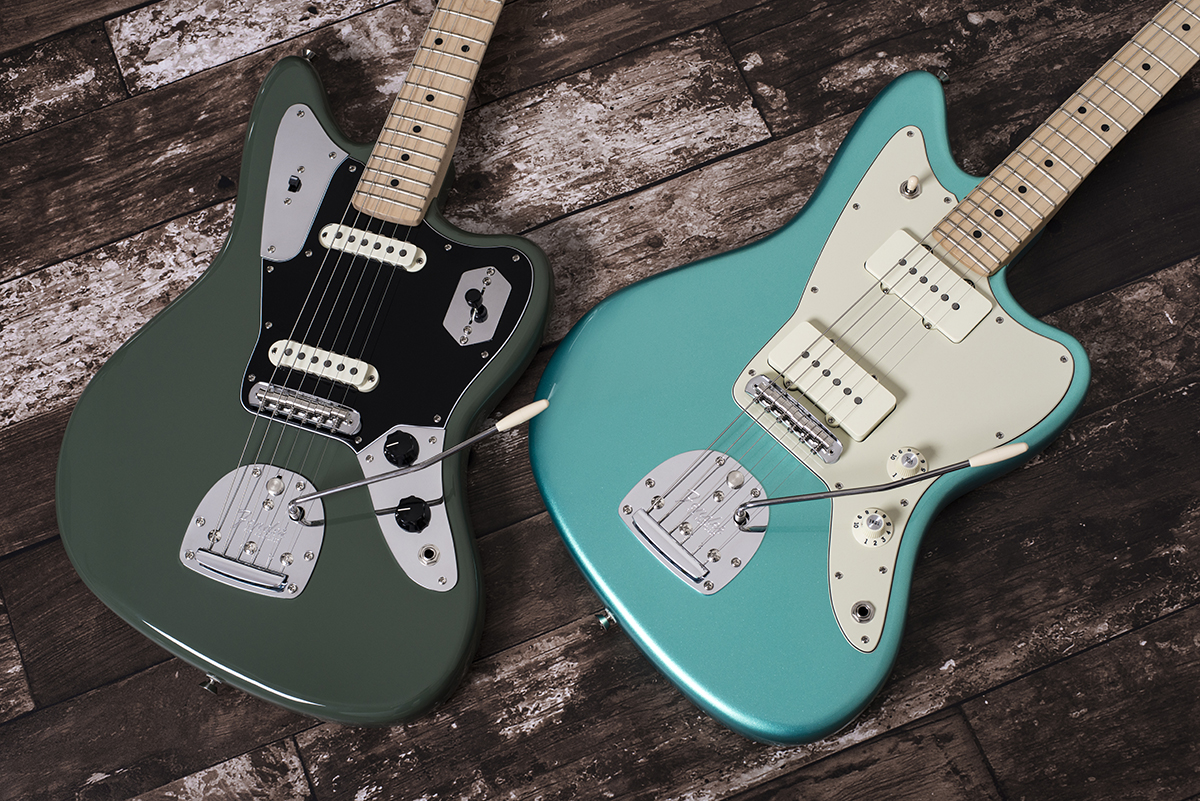 Fender’s Jazzmaster and Jaguar have not always felt the love from guitar magazines. In the old days, they only really cared about three genres of music – blues, rock and blues-rock – and so it’s perhaps not surprising that they didn’t have much time for plinky planks favoured by grungey noiseniks with rough hair and even rougher technique.

But those days are long over, and while Fender’s offsets might still be something of a niche concern, they have an undeniable cachet of cool, being seen in the hands of everyone from J Mascis and Kurt Cobain to Slipknot’s Jim Root and Foals’ Jimmy Smith.

The reason that many guitarists may still a bit lukewarm, however, is that in contrast to its more famous solidbodies, there’s a perception that Fender didn’t quite nail things with the offsets first time around. They have a reputation for being eccentric and difficult to work with, particularly in a professional environment.

Lots of people who buy vintage offsets immediately mod them – bridges are replaced, pickups are upgraded, pot values are changed… it’s a lot of work. So with that in mind, while there’s lots to be said for vintage-correct recreations, wouldn’t it be great if Fender put all that aside for a minute and gave us a top-spec Jazzmaster and Jaguar that didn’t require any fiddling at all? Well, thanks to the latest entries in the American Professional range, your prayers may have been answered… 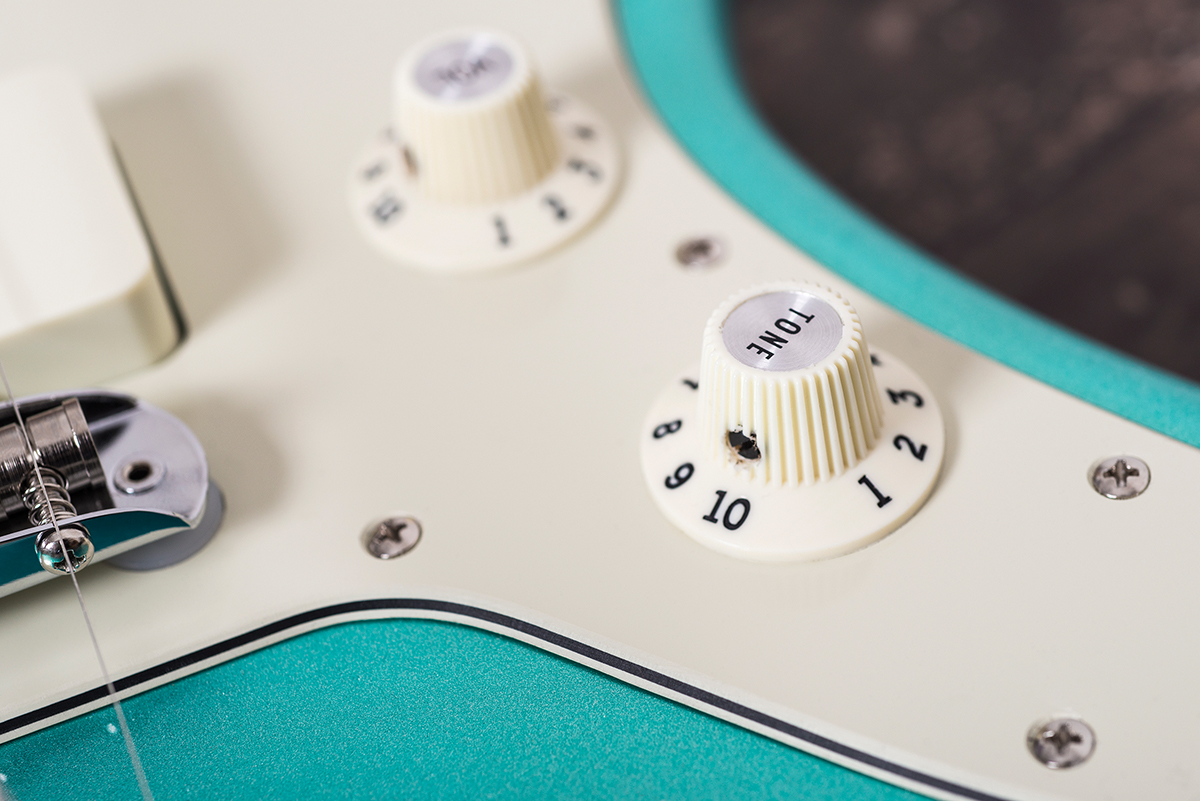 Fender American Professional Jazzmaster
You don’t see many Jazzmasters with maple fretboards – for many die-hards it’s a cardinal sin – but you can’t deny this guitar is gorgeous. The new Mystic Seafoam finish is a triumph, combining with that maple board to create a look of magical radiance worthy of a Disney princess. Let’s hope this is the Disney happy ending we Jazzmaster lovers have been waiting for.

And what a wait its been. Since Fender released the American Vintage Jazzmaster in 1999, we’ve had to make do with old-fashioned 7.25-inch radius fretboards, rocking bridges that don’t always stay where you ask them to, strings that pop out of the threaded-barrel saddles, push-in vibrato arms that work loose, inaccessible truss rods, a tendency towards shrillness, and a muffled ‘rhythm’ circuit that usually only gets engaged by accident. 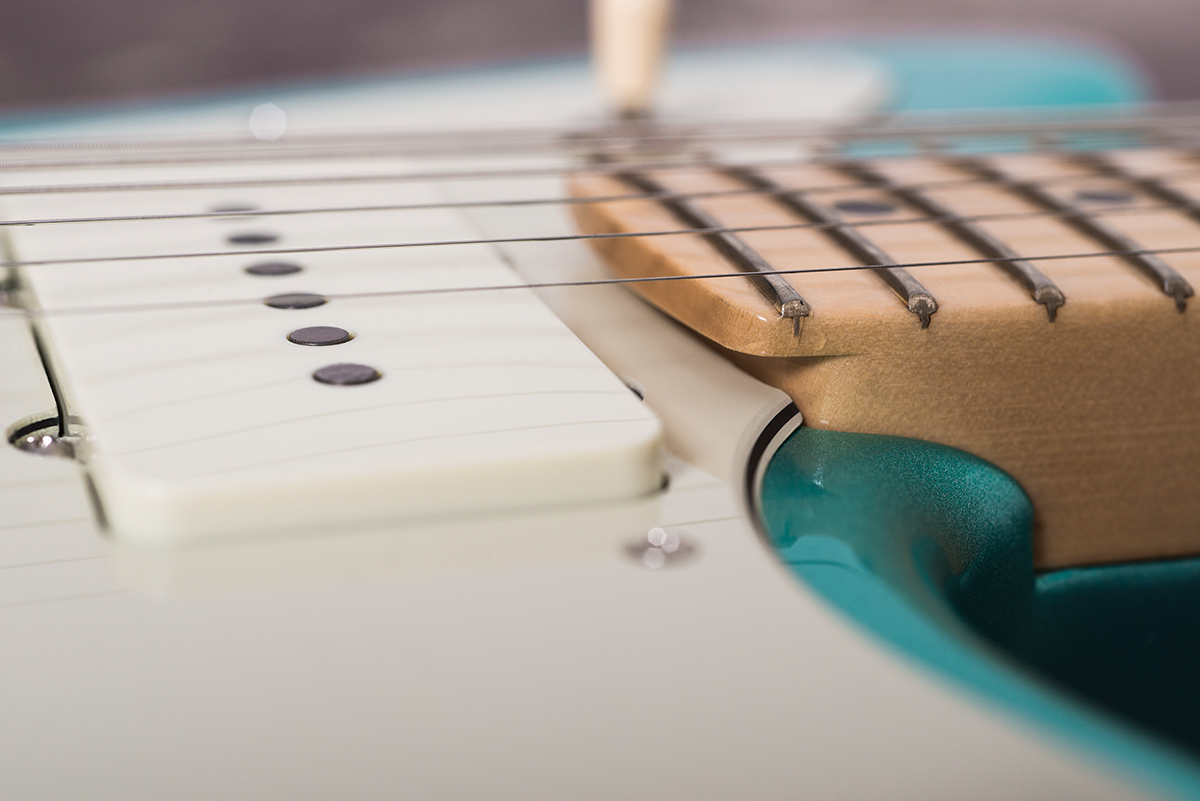 The Mystic Seafoam colour is a new addition, and it’s absolutely stunning

The American Pro addresses all of these issues. The ’board radius is a bend-friendly 9.5 inches, the bridge is secured by nylon inserts, the saddles are more reliable Mustang types, the arm is screw-in, and truss rod access is at the headstock end. The new V-Mod pickups are overwound for added beef, and even the pots have been looked at – they’re 500k instead of the usual 1-meg types, which should compensate for the bright maple board at least. And yes, the rhythm circuit is gone.

Joining our Mystic Seafoam guitar in the maple ’board stakes is a more restrained Sonic Grey model, while fans of more conventional looks can get a rosewood fingerboard with either Sunburst or Olympic White colour options. All have a ‘deep C’ neck with 22 frets described as ‘narrow-tall’.

The three-way pickup switch moves up to where the rhythm circuit controls used to be – but it’s actually slightly closer to the neck than that. Players with drifting right hands be warned: you may whack it by mistake even more often than you did the old one. And fans of the rhythm circuit’s mellow tones be even more warned: the body is not routed to make reinstating it a simple job. 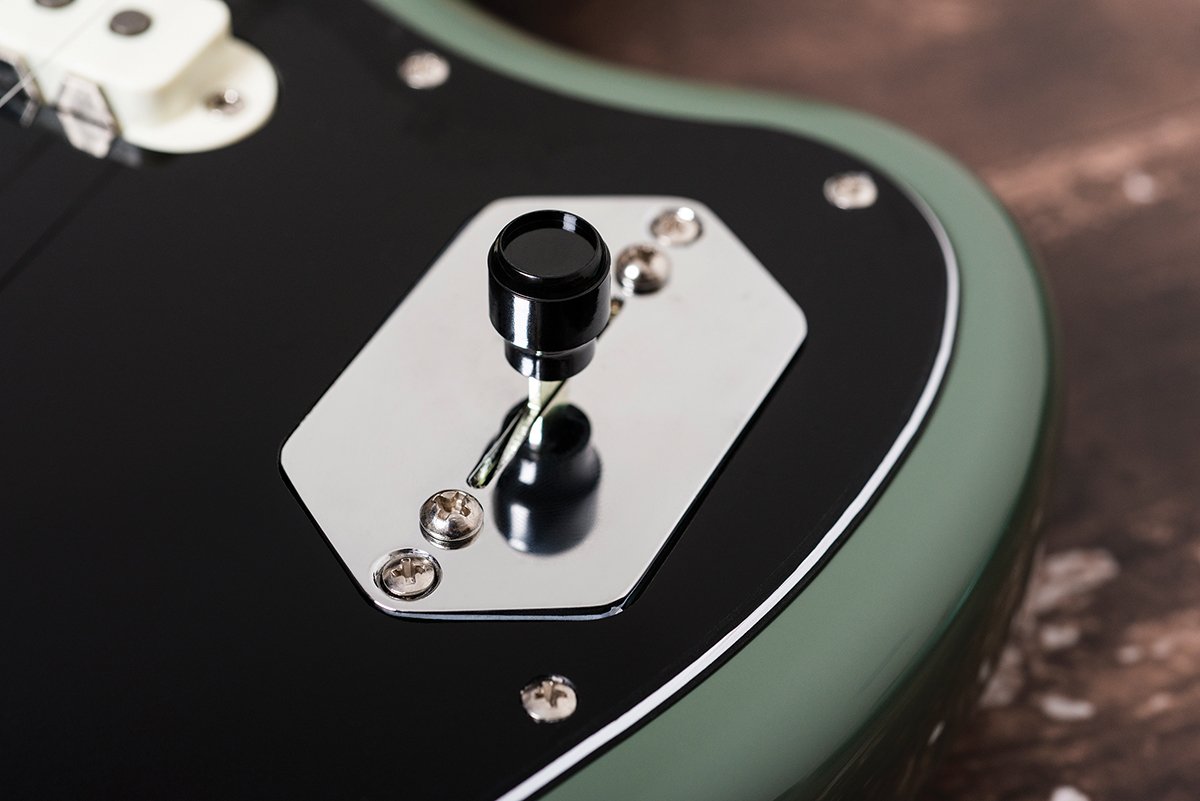 Just like the Johnny Marr model, the Jag now has a four-way pickup selector

Fender American Professional Jaguar
Much of what we said about the Jazzmaster is equally applicable to the Jaguar. The main difference, in fact, is that this new colour – Olive Green – is even more seductive in the flesh than Mystic Seafoam.

The neck profile, bridge, whammy bar, pots and fretboard are all the same as the other guitar’s, but what’s unique to the American Pro Jaguar is its switching arrangement. The usual three sliders at the bottom make way for a more practical four-way switch, the fourth position being both pickups in series – an idea lifted from the fantastic Johnny Marr signature model.

This time the rhythm circuit is replaced by a single slider to knock the pickups out of phase in the two ‘both’ positions – so there’s no room for the bass-cutting ‘strangle switch’. As with all Jaguars, the scale length is the other big difference between the two, coming in at a 24 inches.

In Use
There’s no avoiding the reality that the American Pro Jazzmaster doesn’t really sound much like a Jazzmaster in the classic sense. But it’s very nice nonetheless: bright and clear on all three pickup settings, with excellent note definition from string to string and plenty of phasey chime in the middle position. 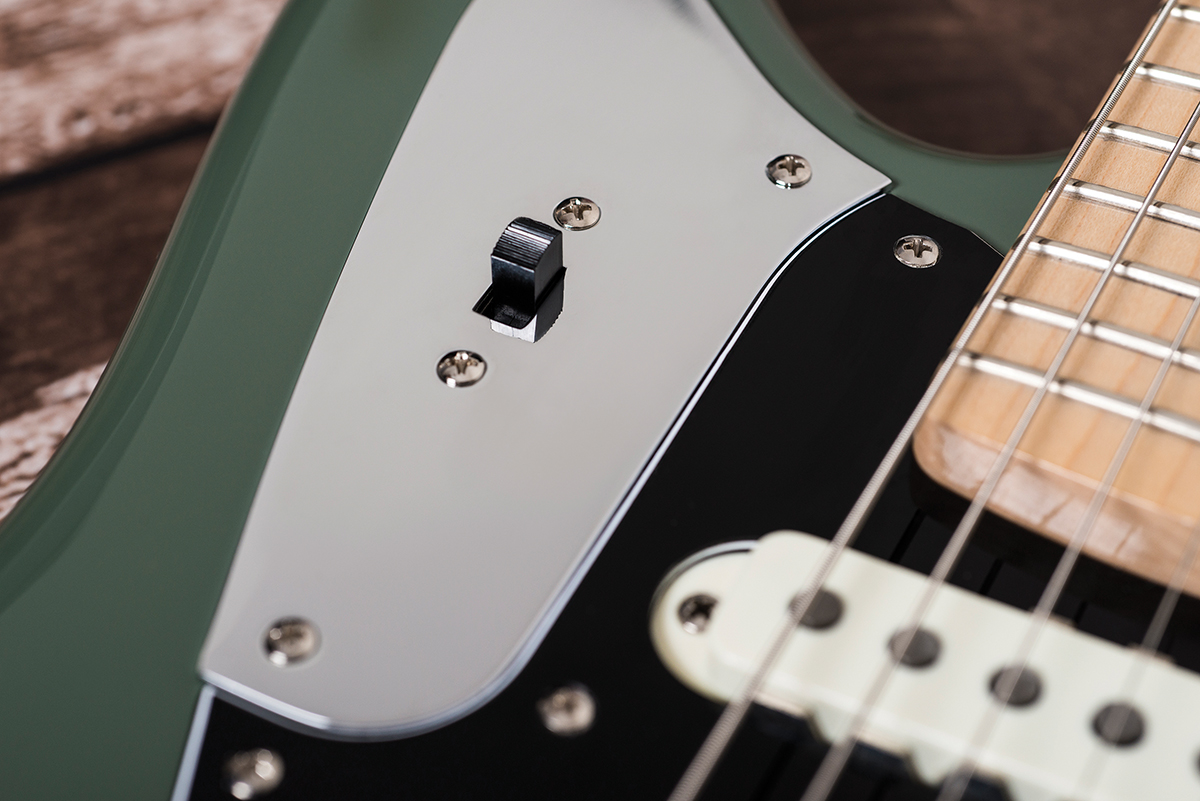 This is a sound with much more punch and focus than a normal Jazzmaster; what you don’t get are the classic percussive ‘plunk’ on the wound strings, the sweetly fragile shimmer on the high notes, and the delicious sparkliness in slowly strummed chords.

Unscrew one of the pickup covers and you’ll find the reason for this: the coils are extra-deep and so narrow they don’t even half-fill the bobbins. You might call them Strat pickups in disguise. If you’re an offset-sceptic, you may be quite happy about this; if you’re a hardcore fan, however, you might miss that classic sound.

Some of the other changes also come with baggage. Those nylon inserts certainly add stability to the bridge, while still allowing it to rock slightly, but we’re not sure if they’ll stop it creeping downwards over time – a common complaint that the Staytrem aftermarket bridge fixed with simple plastic bushings. 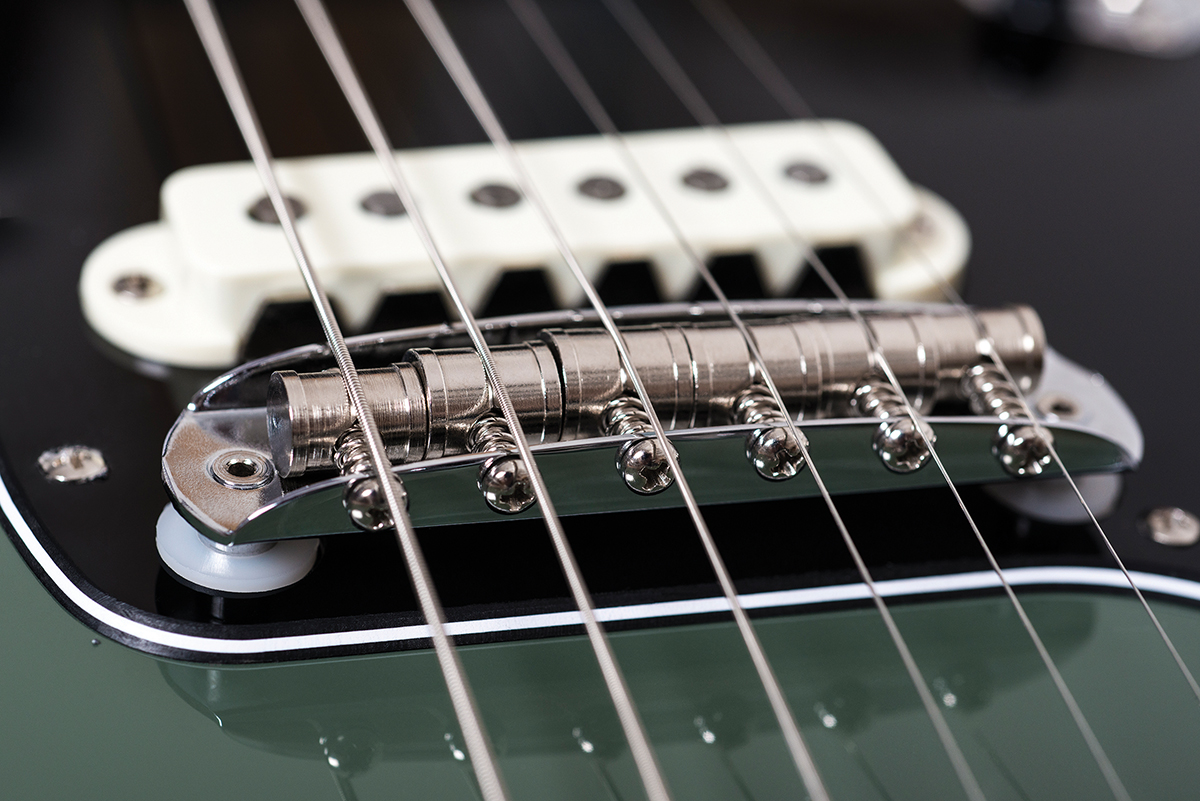 Also, the saddles’ fixed 56mm spacing means both E strings are rather close to the edges of the neck on the upper frets. Maybe this isn’t a biggie, but again, we look to the Staytrem and Mastery bridges with their trouble-free 52mm spacing…

Like the Jazzmaster, the Jaguar is a real pleasure to play – the chunky neck feels great and we have no qualms about those frets, which are really only ‘slightly narrow, slightly tall’. More importantly, the Jaguar hasn’t been quite so radically revoiced. The short scale keeps the bottom end lightweight, and clean tones are pure and vivid in a way that’s uniquely Jaggy.

That fourth setting adds a useful humbucker-like option, and the phase switch brings hollowed-out tones that are more pleasing to modern ears than positions two and four on a Strat.

The V-Mod pickups are again on the hot side, however, and what you gain in clarity and solidity you lose in expressive character. Next to an American Vintage model it feels a bit stiff. All that delicate, twinkly stuff we were missing in the Jazzmaster? You won’t find it here either. 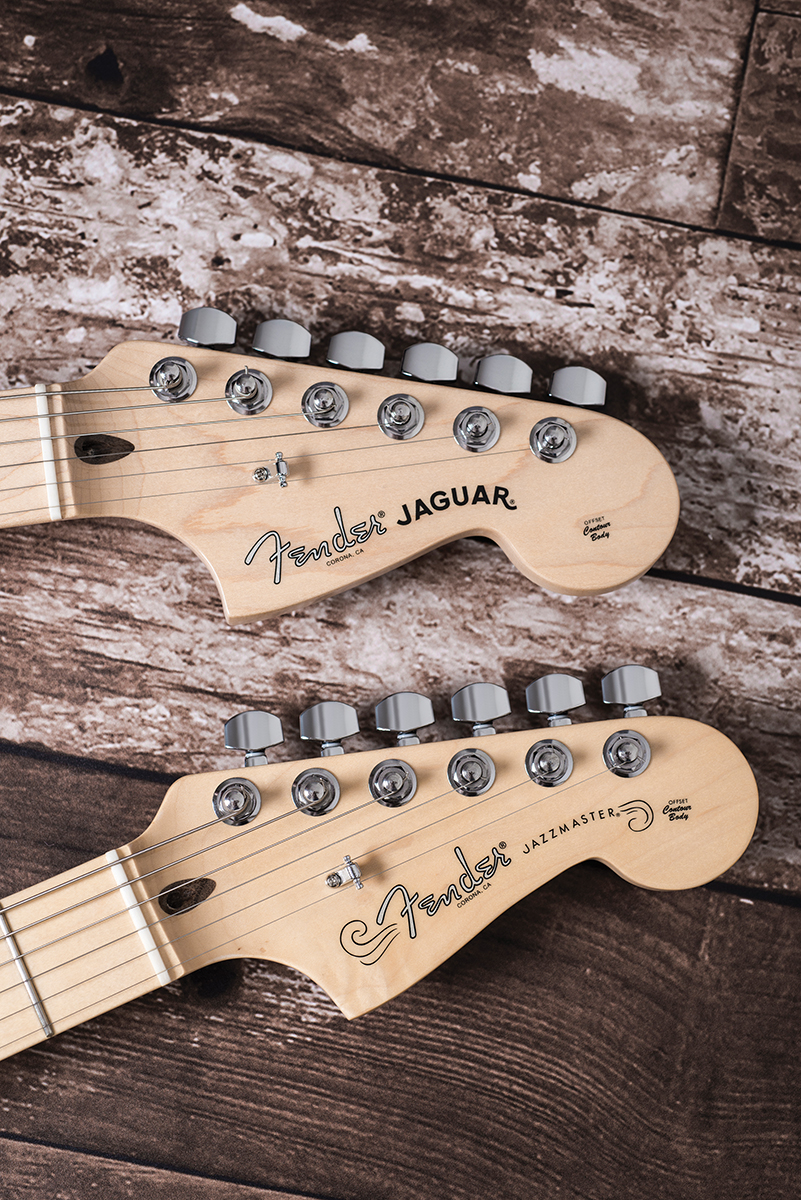 Maple necks on Fender offsets are uncommon, but they look great here

So it’s not a classic Jag, but you won’t mind that if you’re coming from Strats and Teles… and maybe that’s a clue to the target market for both of these instruments. We suspect that they’re offsets for people who don’t like offsets. These guitars might not be the Disney ending that vintage offset fans were hoping for, but they’re undeniably lovely guitars.

This is Fender’s attempt to broaden the appeal of the Jazzmaster and Jaguar rather than please die-hards, and who can blame them? 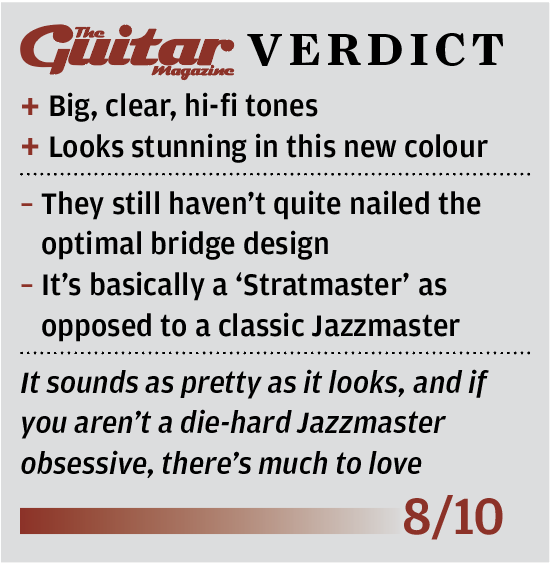 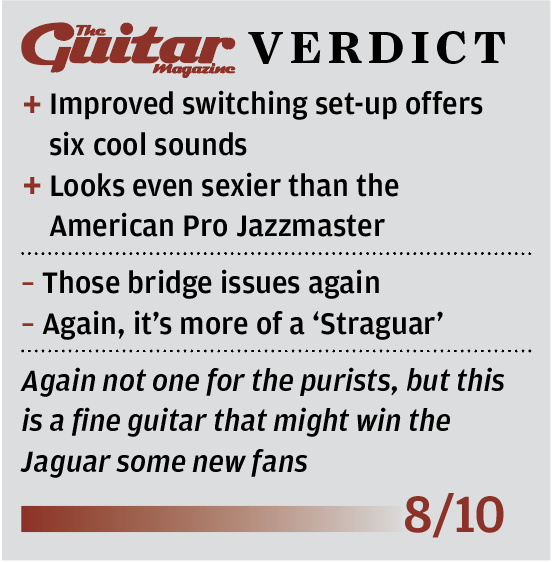