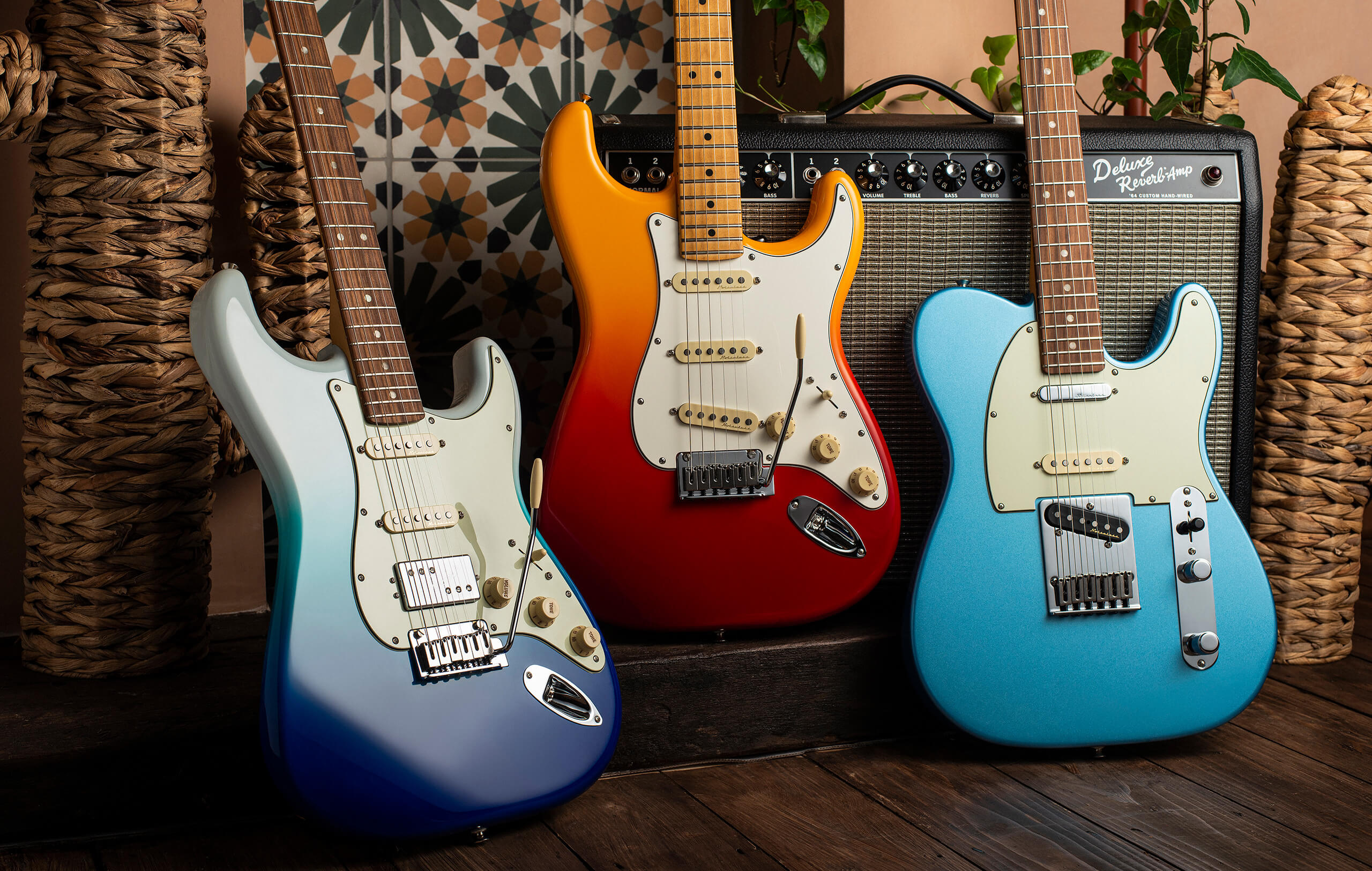 With features and finishes optimised for modern players, Fender’s Player Plus Series sets its sights on the social media battleground.

Whether you are watching the likes stack up on Instagram or looking forward to your next pub gig, there’s little doubt that, for most real-world guitarists, Fender’s Mexico-made instruments are situated firmly in the Goldilocks zone. The ‘right’ name on the headstock goes a long way, of course, especially when pricing is competitive and feature sets seem to get better and better with every new iteration.

2018 saw the most affordable Fenders in the company catalogue – the Mexico-made Standards – overhauled and rebranded as the Player Series. It’s safe to say this was a success; Fender has sold over 400,000 Player Series instruments to date. Now, in 2021, it’s the turn of the Deluxe Series, reimagined here as an eye-catching new line: Player Plus.

Although news of the Player Plus range was leaked by an online retailer back in July, the instruments launched officially in mid-September. Newly voiced Noiseless pickups and rolled fingerboard edges are among the headline upgrades, while the gradient finishes on offer are doubtless designed to stand out on TikTok and Instagram, where a new generation of guitarists has emerged in recent years – many of them gravitating towards the lighter and funkier textures of Fender guitars. Indeed, the launch of Player Plus also coincides with the debut of Fender’s own TikTok channel, for which it has teamed up with boundary-pushing artists such as Blu DeTiger, Hannah Dasher, Gabriel Garzón-Montano, The Destroy Boys and Nova Twins. 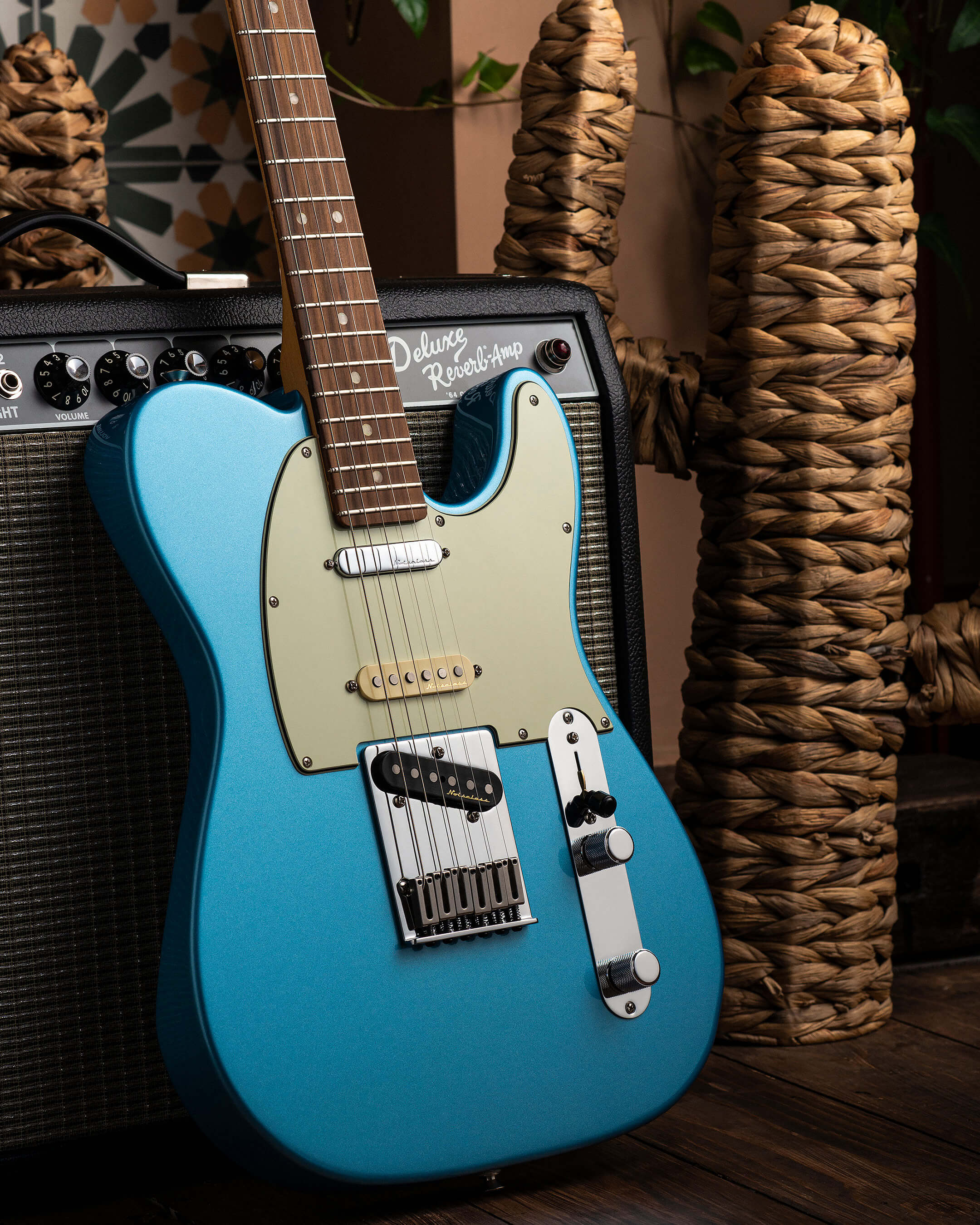 Fender has been getting players noticed with bright guitar tones and vivid finishes for many decades, of course, and the smooth gradient finishes here can actually be traced back to the Dan Smith-era Stratocasters of the early 1980s. Back in the day, Fender’s distinctive Stratoburst finish was even copied by long-defunct budget brands such as Marlin. How do we know? We used to own one. Any readers who, like us, cut their teeth on secondhand Marlin Strat copies in the early 1990s have our deepest sympathies – entry level guitars have got significantly better since then.

As showcased by the Player Plus Stratocaster and Stratocaster HSS respectively, 2021’s Tequila Sunrise and Belair Blue will certainly polarise opinion. However, traditionalists should fear not; every Player Plus guitar and bass is also available in a nice, sensible Three-Colour Sunburst. The Player Plus Nashville Telecaster isn’t offered in a gradient finish but the Opal Spark paint job of our review model is an attractive metallic-blue that has a family resemblance to Fender custom-colour finishes of the past. 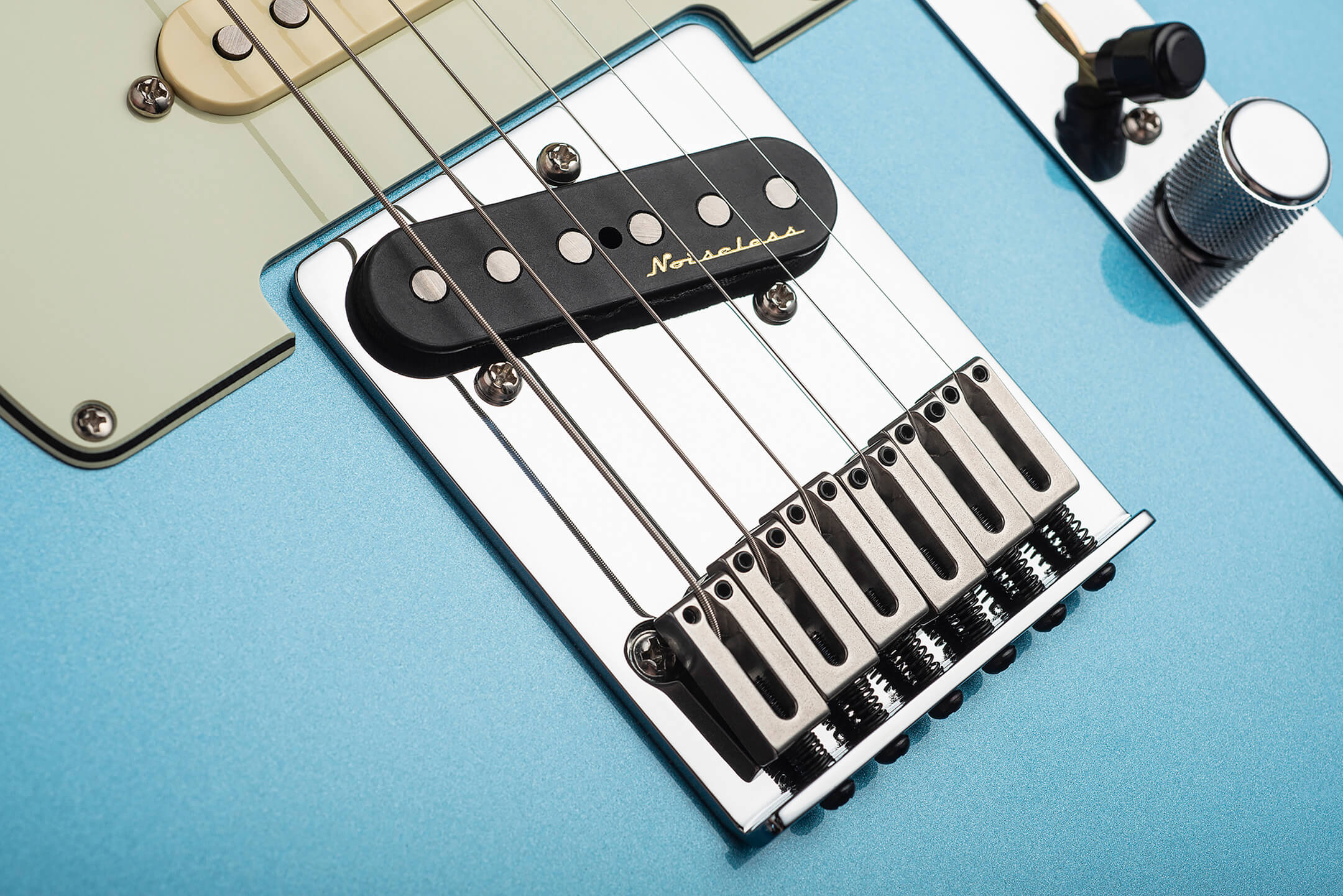 So far, so glossy – but if the colours chosen for these instruments are their most striking feature, their satin urethane-finished necks are where you’ll find the most welcome upgrade. One of the most subtle yet impactful things a guitar maker can do in the manufacturing process is to round over the fretboard edges for a broken-in feel, and it’s great to see a feature that was formerly the preserve of boutique and high-end instruments trickle down into the mid-price market.

We’re not quite talking about Custom Shop levels of finesse, of course, but sliding a finger and thumb down all three necks reveals no sharp edges and the overall feel is impressive. Indeed, we’ve played plenty of USA-built instruments from a variety of brands that have left their respective factories in much less welcoming condition. It’s especially noticeable on the Player Plus instruments with pau ferro fingerboards, the fret-ends of which seem to have been given a little more love than those of our maple ’board Strat. However, this could simply be the luck of the draw rather than indicative of a manufacturing trend.

Not everyone will be smitten with the streaky light-brown appearance of the pau ferro fretboards and, on balance, we prefer the appearance of the tinted maple ’board on the Tequila Sunrise Strat. However, in the midst of a global climate emergency, it seems churlish to complain. In response to recent supply issues with rosewood and North American ash, Fender has shown that it is unafraid to pivot away from the vintage recipe on production-line guitars. When producing musical instruments on such a huge scale, it’s simply a very different equation to buying wood for a small shop.

Although all of its timber comes from sustainable forestry, we feel the Californian company could do a little better when it comes to how these guitars are shipped. For example, even though they are shipped in gigbags, each instrument also arrives inside an additional foam bag, which invariably tears when you remove it and is immediately discarded. There’s also protective plastic film on the pickguard and even the backs of each of the locking tuners. Sure, it may be possible for some of this material to be recycled but a huge amount of it almost certainly ends up in landfills. And when you’re talking about hundreds of thousands of units, that’s a big pile of single-use plastic. It’s a complex topic but the fashion industry has found ways to turn plastic waste into apparel, and it would be a hugely positive step for a market-leader in the guitar business to follow a similarly innovative path.

When it comes to the plastics fitted to the guitars themselves, the pickup covers, knobs and Strat switch tips here are all aged white. The HSS Strat and Nashville Telecaster sport three-ply mint green pickguards, while the Tequila Sunrise Strat wears a parchment ’guard which gives it a cleaner and more contemporary look. The single-coil pickup covers also feature gold Noiseless logos, while the headstocks are adorned with mirror-silver spaghetti decals with a classy simplicity reminiscent of the gold equivalents on Fender’s American Ultras.

In addition to five-way switching, each guitar comes with a push/pull tone pot that adds two further sounds to the mix. When engaged, on the regular Strat and the Nashville Tele this adds the neck pickup to positions one and two, while on the HSS Strat it puts the humbucker in coil-split mode. Predecessors to these models in the Deluxe Series included trick wiring in the shape of S1 switching and discreet push/push switches situated between the tone controls. Though a push/pull pot is a simpler solution that’s more readily replaceable if something goes wrong down the road, it’s worth noting that traditional Stratocaster knobs are quite tricky to grip and pull upwards at the first time of asking, especially in a performance scenario. 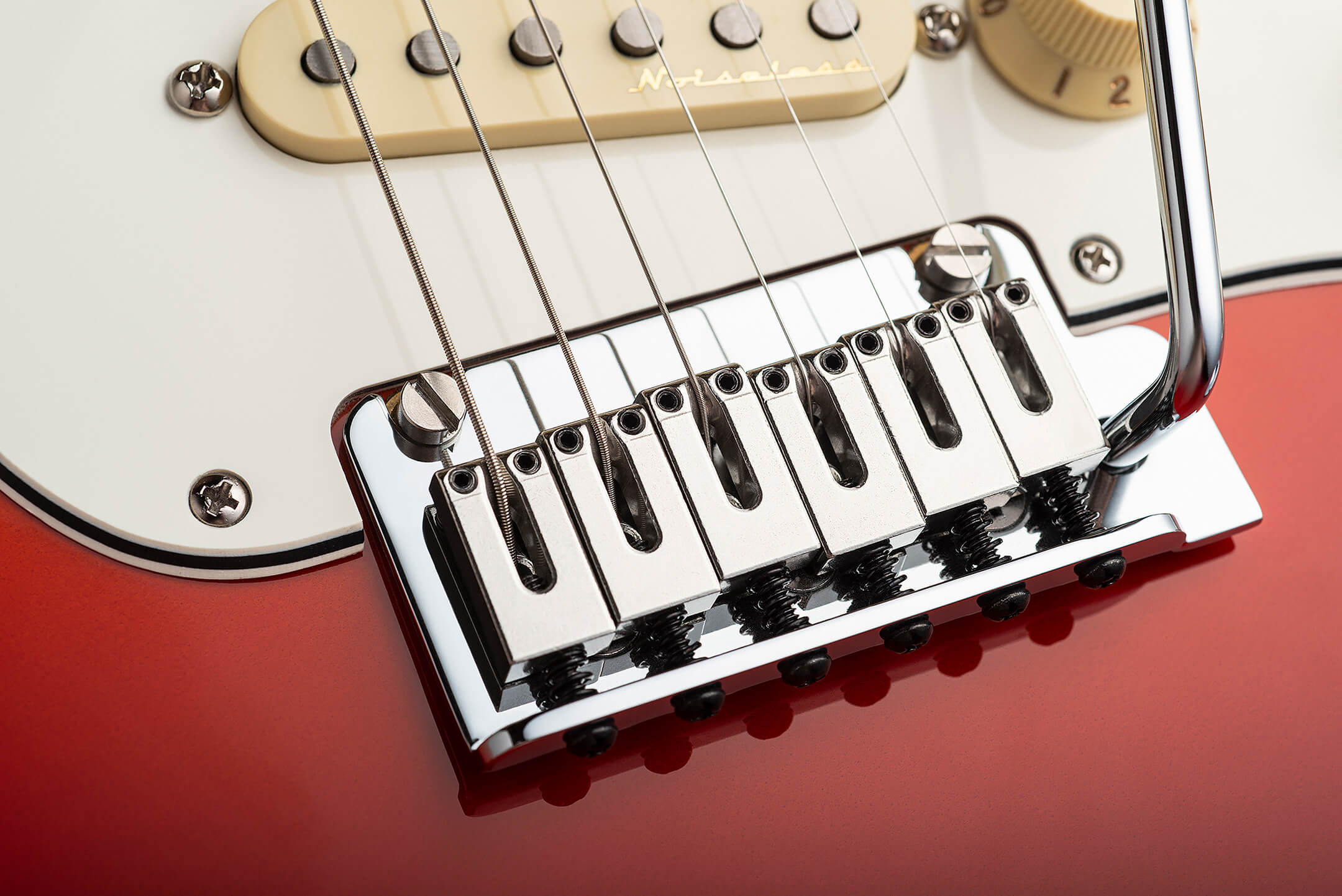 The most consistently successful method we found was to use our pick to lever the knob upwards from beneath it. However, if you are planning on switching tones mid-song, we’d recommend retrofitting a knob that’s easier to grab hold of. There are no such issues using the Telecaster’s knurled metal tone control, of course, but on instruments that are claimed to have been “engineered to remove any obstacle to effortless playing”, our Stratocasters’ push/pull problem does seem like an oversight.

Other downsides? Well, Fender’s Deluxe gigbag looks a little tired these days and something with more comfortable shoulder straps, better internal padding and a neck support – even a larger outer pocket with room for a small pedalboard – would better suit the demographic it’s shooting for. Some players might also lament the departure of the contoured heel design that featured on Deluxe Series models but that’s very much a personal preference related to both individual playing style and hand size. We don’t have any difficulties executing full-tone bends at the 22nd fret with the traditional heel arrangement – as ever, your mileage may vary.

The three instruments here offer a fair bit of weight variation but there’s a real consistency when it comes to player comfort; those slim C-profile necks with their softened edges really do seem to disappear in the hand. The hardware performs as well as the woodwork; both Strat whammy bars are expressive and, in combination with Fender’s rear-locking tuners, we don’t experience any tuning issues whatsoever.

Much like digital modelling tech, it feels like Fender’s Noiseless pickups have reached something of an event horizon – rather than a compromise for the sake of convenience, Noiseless pickups are now simply part of the guitar landscape and, when compared to vintage-style single-coils, the pickups on these Player Plus models certainly provide an easier ride on headphones. They do the business through an old-school tube amp too; through our tweed combo, there’s plenty of clarity and dynamic range without proceedings becoming too spiky or shrill, and dedicated bridge-pickup tone controls help tame the high-end if you need to. 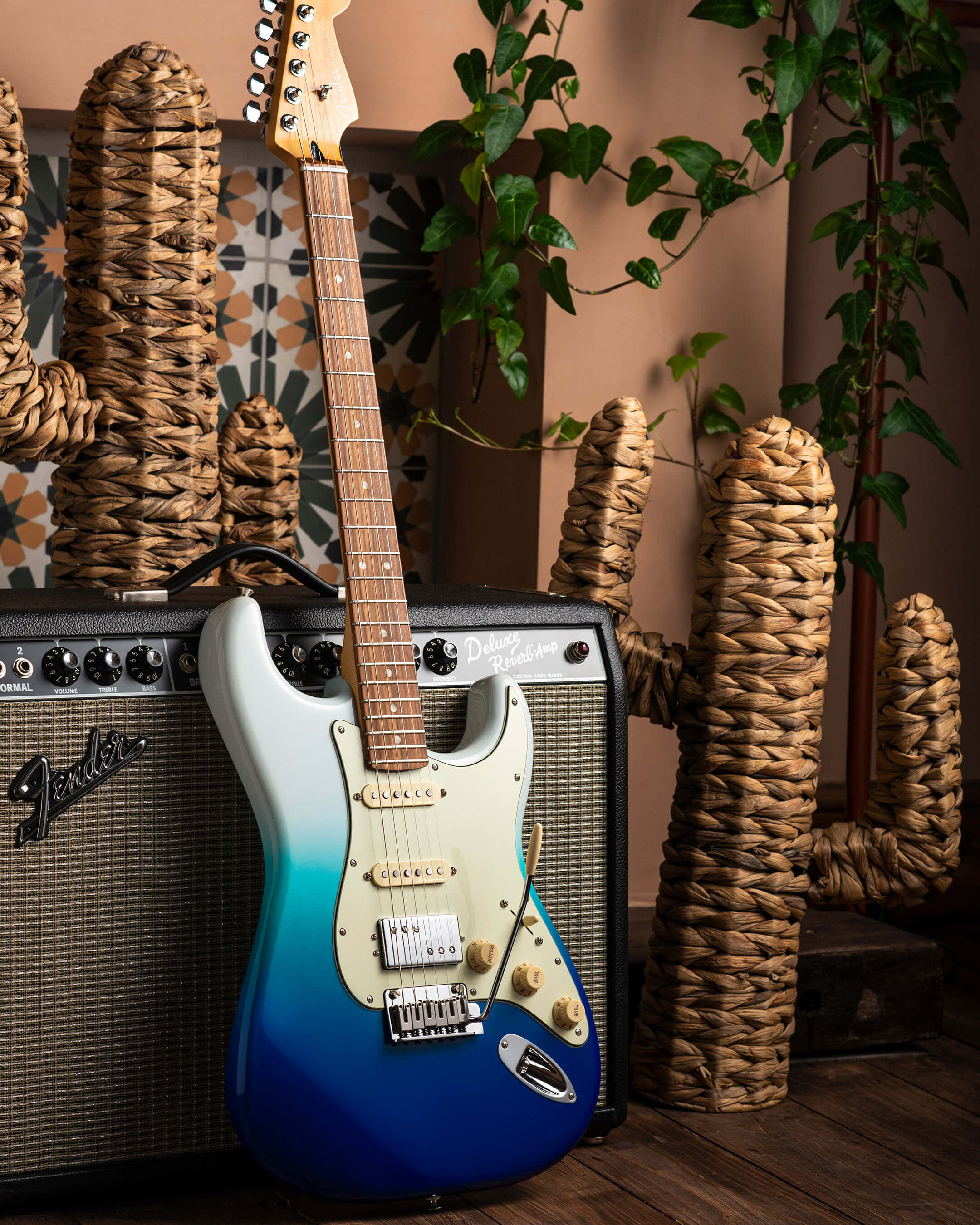 The Stratocaster has been so ubiquitous in popular music that your idea of inspiring Strat tone could just as easily be John Mayer through a Dumble or Kurt Cobain into a DS-1 – and the Telecaster’s history is just as varied. All three of the instruments here feel like they offer something of a blank canvas – if you want to lean into a more vintage vibe you can but they also have the precision to work effectively at the front end of a chain of ambient effects. And the enhanced wiring simply provides more colours to paint with, whether that means getting Telecaster-style middle-position tones out of the regular Strat or using the HSS model’s coil-split to shift between characterful humbucking grind and a wirier single-coil voice. Though bear in mind that the latter isn’t noise-cancelling – the Player Plus humbucker is a more traditional design than the Noiseless single-coils. 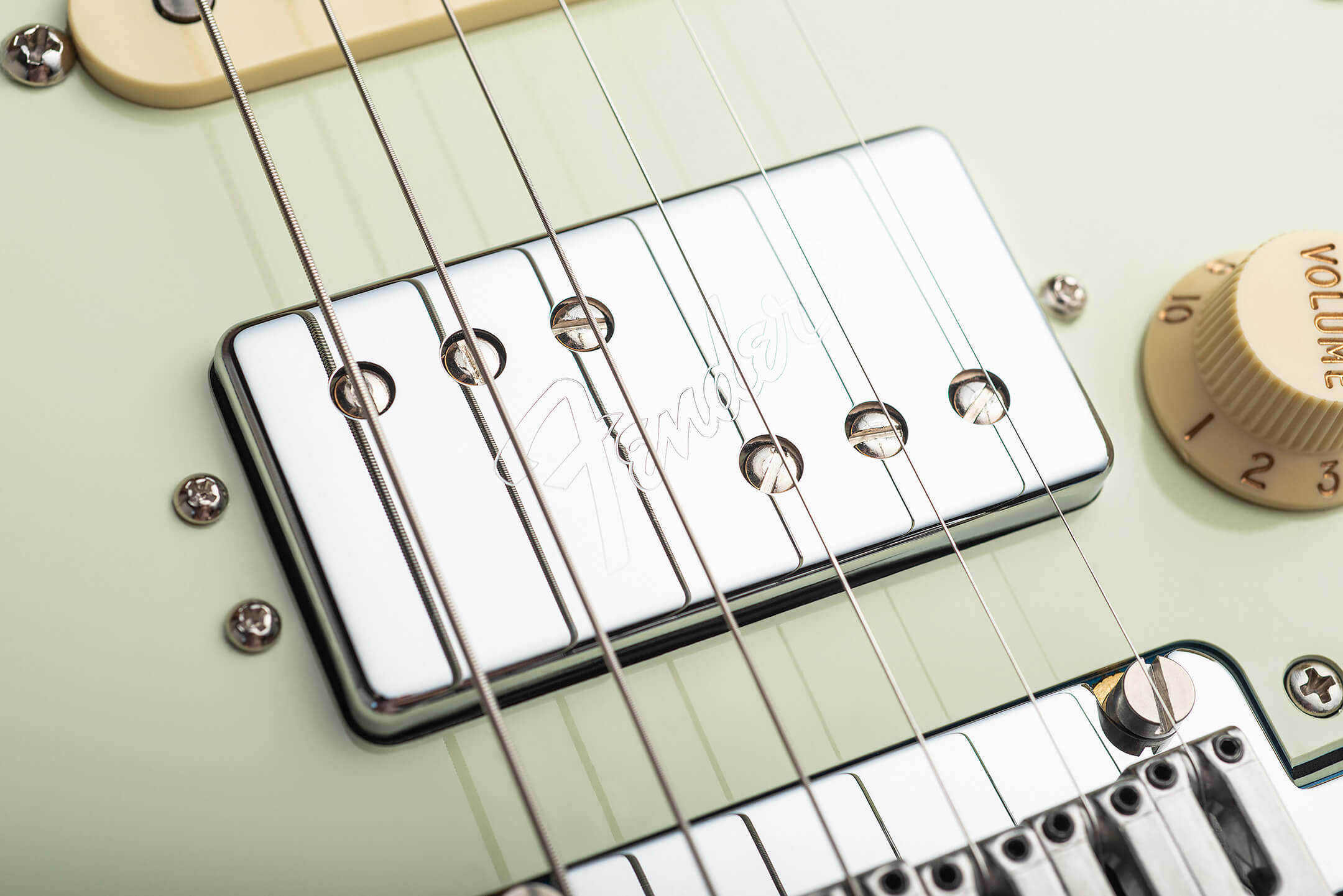 Though it’s the heaviest and least visually striking instrument of our trio, sonically, the Nashville Telecaster might just be our pick of the bunch. There’s plenty of grit and attitude from the bridge pickup, which also provides a predictably rich rhythm bed for soloing over. With its mixture of a full complement of Tele tones and convincing Strat quack in positions two and four, it’s a seriously versatile proposition.

The neck pickups of both Stratocasters deliver more sonic highlights and, with the Telecaster providing the rhythm backing in open G, there’s a lot of fun to be had throwing Southern fried Strat licks on top. Indeed, there’s plenty of enjoyment to be had with these guitars, period. Aside from that tricky push/pull switching on the Stratocasters, the Player Plus Series seems primed to replicate the huge success of the Player Series by offering guitarists a high-performance experience without the lofty ticket price that usually accompanies it.