A new Strat is always a cause for celebration, especially when the price is right – and this, the latest Mexican offering, is a bit of a looker too. Review by Marcus Leadley. 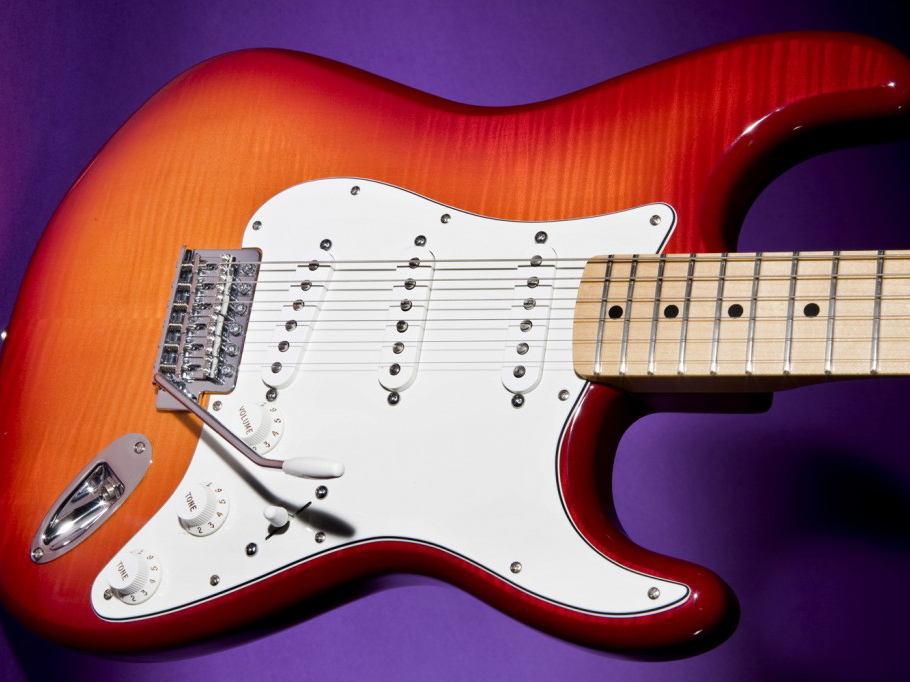 Back in the spring at MusikMesse in Frankfurt, Fender launched a bunch of new Mexican-built Strats. Nothing especially new about this, but this time the tweaks are at the top end of the range. As well as a couple of nitro-finished models with vintage specs there’s this month’s review subject, the Standard Stratocaster Plus Top.

Plus Top, of course, means flamed maple. Leo Fender’s traditional choice of ash or alder was all about practicality, and although back in the ’50s and ’60s a sunburst finish – or a butterscotch or a Mary Kay white – could sometimes reveal some pretty handsome grain, the look of the timber was never the highest priority. For this model the company is pulling out the stops with tight, figured maple, not an uncommon feature of Fender Custom Shop guitars, not to mention competitors such as Tom Anderson, Levinson Blade and Melancon. However, you won’t be taking one of those home for a street price of about £500 – and that’s what you’ll pay for a Plus Top.

We have the maple ’board model with the red-to-orange ‘aged cherry burst’ polyester finish; the rosewood version is more subdued and traditional, with an aged tobacco sunburst. This one’s certainly bright, cheerful and lively, but not at all gaudy. The maple isn’t a solid bookmatched top – at this price it’s a veneer – but it has a rich, three-dimensional flame with lots of depth, while around the rear the finish makes the best of the grain of the solid two-piece alder body. This isn’t the lightest Strat we’ve ever played, but it’s a long way from being the heaviest.

While the fingerboard and headstock are finished in gloss urethane the back of the neck has a satin finish somewhat reminiscent of the cover of a posh paperback book. This is an interesting and slightly unusual combination, as all-over gloss would be very 1970s Fender, and all-over satin more of a 2000’s touch.

However, here the two finishes work well together; the board is fast and snappy and the neck has a mellow, played-in feel. There’s no separate fingerboard; the medium jumbo frets are set directly into neck timber in classic Fender style. The neck has a fairly chunky modern C profile. The 9.5″ board radius is a little flatter than the 7.25” found on the Classic Series ’60s and ‘70s models, making this a more contemporary-feeling Strat. These Plus Tops ship with relatively light 9-42 gauge strings, and the action is low and the guitar feels incredibly fast. Bends up past the 12th fret are especially satisfying, so it’s really tempting to get lost in wig-out solo territory… and why not?

In terms of hardware the Plus Top is definitely a Standard Strat. Three single coil pickups are controlled by a single volume control and a pair of independent tone controls plus a five-way pickup selector. The vibrato works well and the guitar stays in tune unless you get really carried away. However, one of the few things we don’t like is the length of the saddle screws; these sit unnecessarily proud and the edges are sharp, which makes string-damping uncomfortable. It’s an easy after-sales fix but unless Fender’s research suggests there are a lot of players out there who like a 7mm action at the 12th fret, we can’t see the logic in allowing this much room for adjustment.

Sounds
Not all Strats are born equal; pickups make a huge difference to the sound, and these are very well-voiced. Part of the Strat Plus’s appeal is its ability to deliver consistently right across the spectrum from clean sounds through mildly-driven tones right on through to full distortion. There’s also the right volume/character balance between the different voices, so you can switch around to nuance your playing mid-song. The bridge pickup’s clean tone is bright and clear and chords really chime. Individual note clarity is excellent; single-string runs record well and intricate layers can be built up over time. There’s a little hum, which to some degree will always be a limitation of single coil technology.

Second position on the selector switch gives you the classic out-of-phase quack, which can be funky or bluesy depending on your technique. The middle pickup delivers a full, rounded sound that can disappear into a mix to add body. The neck/middle out-of-phase sound retains its brightness and while the top end mellows out, the lower midrange comes forward to add more weight. The neck pickup delivers a very even tonal character – a flat sort of Strat response which is very useful in a supporting, rather than lead role.

Winding up the amp gain a little highlights the dynamic character of these pickups, and it’s here I find some of my personal favourite Strat moments; you can move between clarity, subtlety and gritty, angular momentum simply by increasing how hard you strike. For more full-on soloing the Plus Top is a brilliant performer. The top end can be a little bright and sometimes needs some reining in at the amp, but this can be a general characteristic of maple-board Strats… it’s not a failing as such, simply a taste thing. The overall hi-fi nature of this Plus Top makes it a very good starting point for sound sculpting with effects.

Verdict
This is a fine example of a classic electric guitar. No corners have been cut when it comes to basic materials, the build quality is good and the standard of the finish high. The maple top adds a nice visual touch without affecting the sound – which is great, because at the end of the day most people will buy a Strat because it looks and sounds like a Strat. If the flame maple look is a bit too fancy for you, there are plenty of alternatives in the catalogue. The Plus Top is an all-round performer offering all the flexibility that helped establish the Strat as one of the standards against which all other electric guitars are judged. You can pay considerably more for a new Strat depending on its point of origin and appointments, but this is a proper Strat that should give years of pleasure. 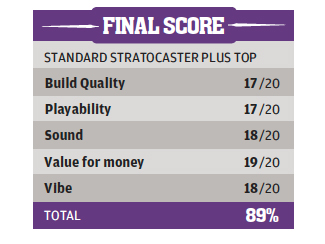