That ‘Great Gretsch Sound’ often has a lot to do with which of the company’s iconic pickups you like the best. With a pair of period-accurate new Jets from the Vintage Select range to hand, we find out what that sound is like today… 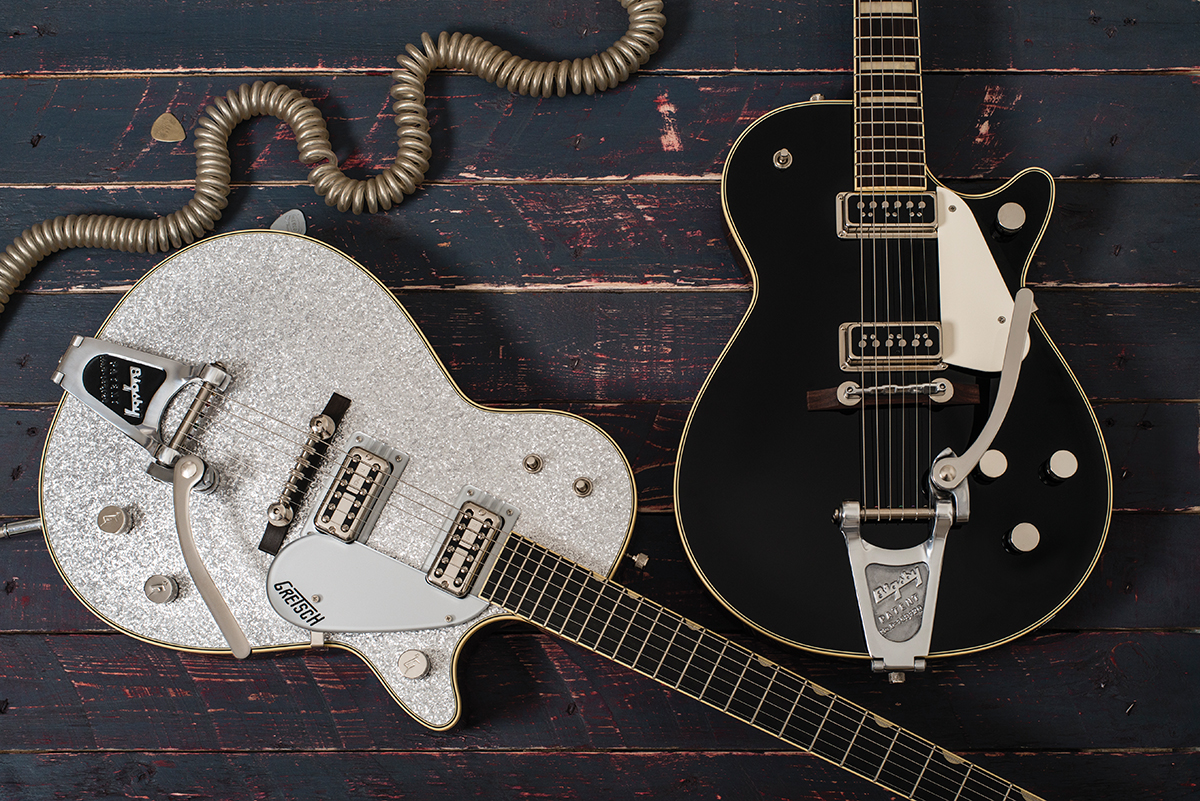 Last year, Gretsch revitalised its high-end hollowbody offering with the addition of the golden age-aping Vintage Select and gig-ready Player’s Edition ranges to the Japan-made line, but the Jet series was left untouched… until now.

For 2017, the company’s less imposing body outline is the subject of a series of reissue Vintage Select Edition models based on specific years of manufacture. Here, we’ve got our hands on the ’53 Duo Jet and a ’59 Silver Jet. You’ll find these Jets listed in the solidbody section on Gretsch’s website but both guitars of course have chambered mahogany bodies and set mahogany necks.

The 1950s saw a great deal of change for the Jet, and our review guitars are well placed to give us an overview of the evolution of the model in that decade. 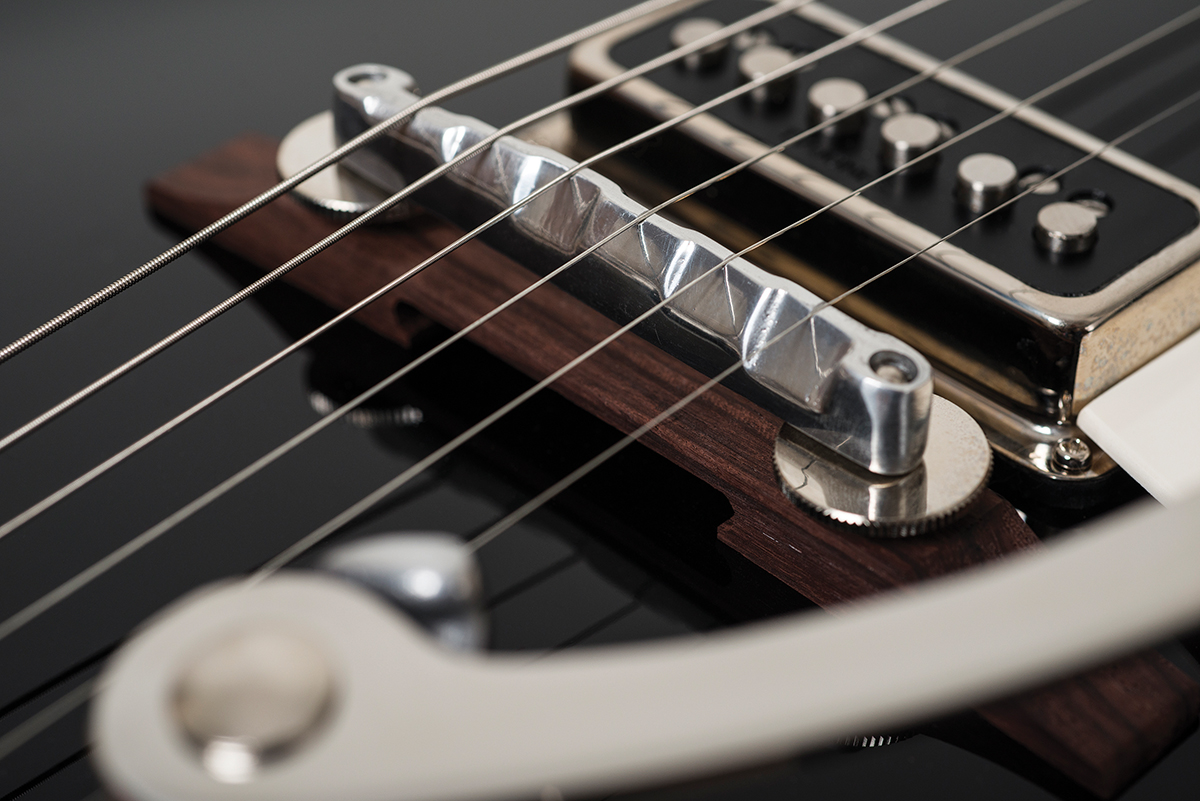 The Duo Jet’s aluminium bridge is solid and reliable

Gretsch G6128T-53 Vintage Select ’53 Duo Jet
When Gibson released the Les Paul in 1952, Gretsch’s response was rapid. This 1953 model is, in Gretsch vernacular, a ‘scripty Jet’ because of its headstock logo.

According to Gretsch expert Ed Ball, this can only be seen on the first batch of Duo Jets, which also feartured a ‘bullet’ truss rod cover, early-style white pickguard and no block inlay at the first fret.

The standard model came with a Melita bridge and a G-stamp tailpiece, so contemporary Duo Jet players such as Cliff Gallup and George Harrison who wanted a Bigsby vibrato had to get them retro-fitted. 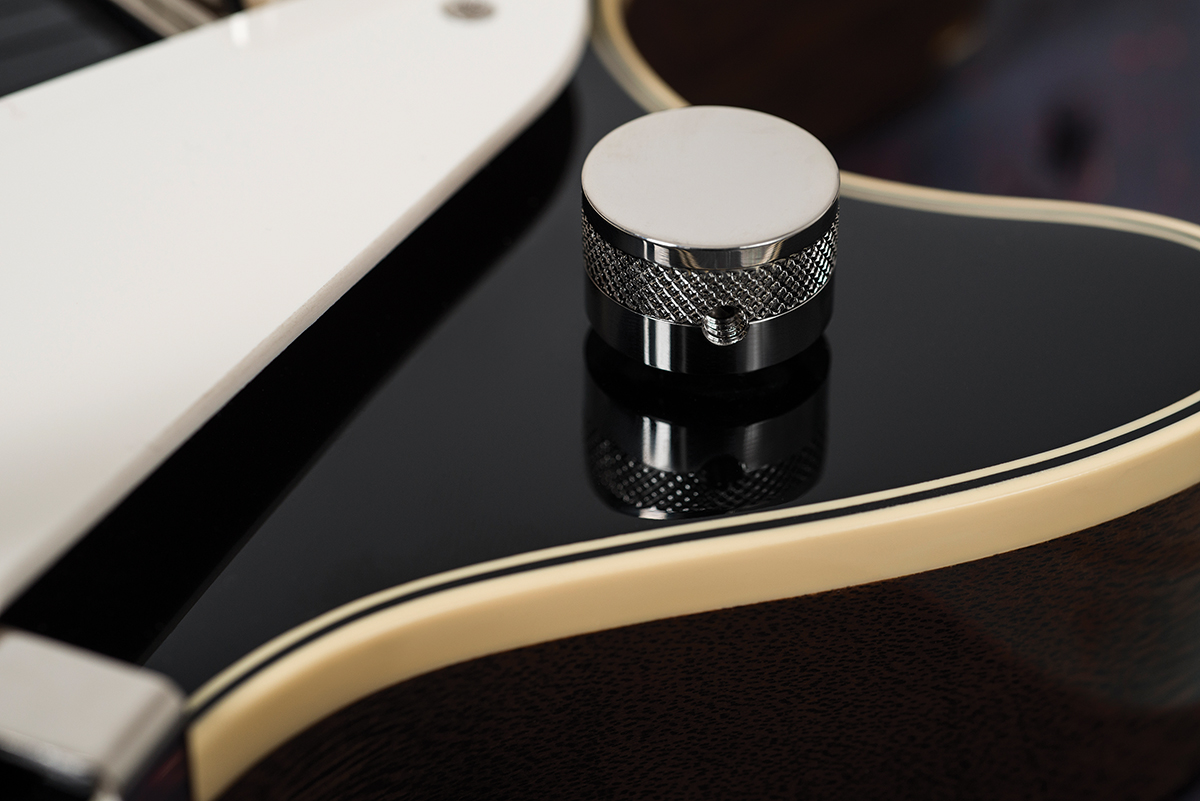 With that in mind, we’re pleased to see a consideration to the wobblers here with a factory Bigsby, along with the matching aluminium bridge. The bridge bottom is rounded for rocking against the thumbwheels when the Bigsby is in use and sits on a traditional archtop-style rosewood base that is fixed rather than floating, so you can play power chords and bend strings without the bridge moving.

DeArmond pickups were standard issue on all high-end Gretsch electrics prior to 1957, and this guitar has TV Jones’ highly regarded T-Armond reissues. Controls comprise a master volume with individual pickup volumes and a master tone. The single switch above the fingerboard is a regular three-way pickup selector. 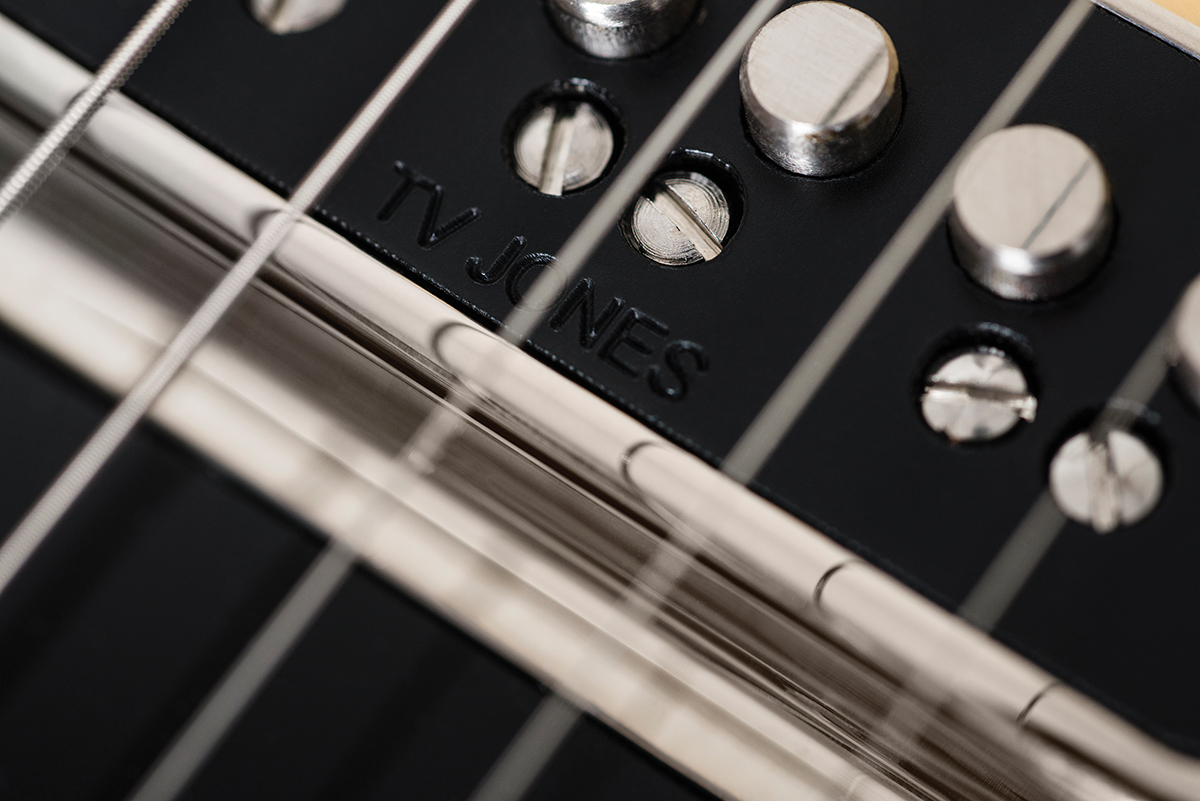 The mahogany is stained to a mid-brown and the clear gloss finish reveals one-piece neck construction. The body isn’t carved from a single piece, but the joint is so artfully done it takes an experienced eye to spot it. 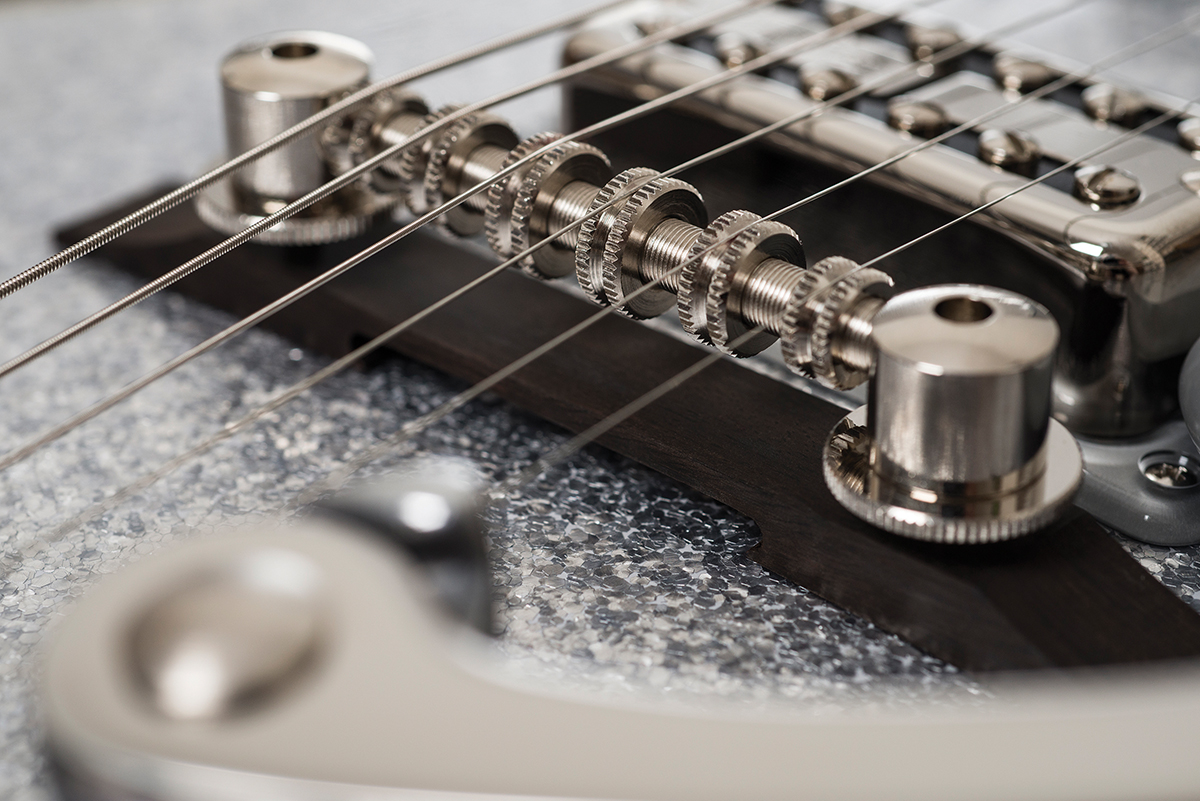 The quirky Space Control bridge has thankfully been updated here

G6129T-59 Vintage Select ’59 Silver Jet
Unlike the Duo Jet, the Silver Jet’s top isn’t painted. Instead, it’s covered with a thin plastic layer that’s glued over the maple laminate top. Gretsch was able to do this because it is, of course, also a drum maker and the drums were being manufactured in the same factory as the guitars back in the 1950s – these nitron coverings were also used to wrap drum shells.

The Silver Jet’s top has large metallic silver and grey flakes and it is exactly right for a ’59 model. 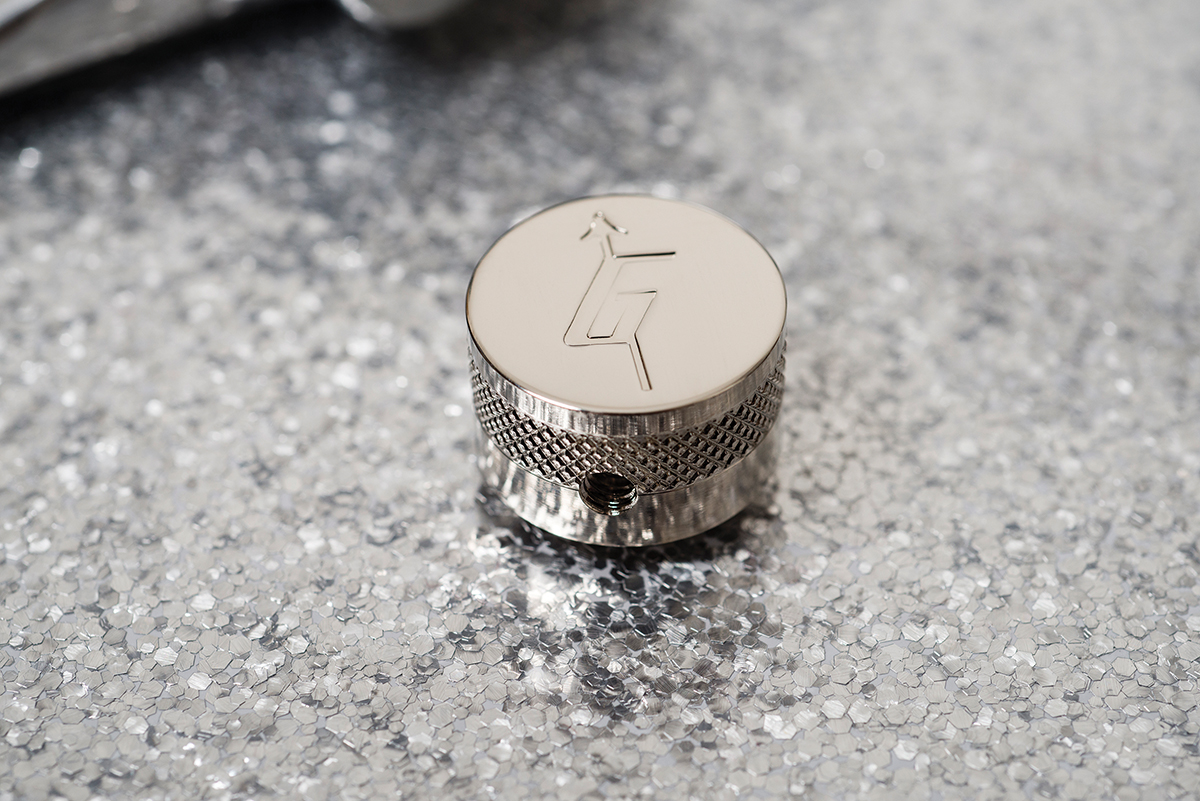 Again we see a 50s-spec Bigsby in residence, but this time the centre section has been in-filled with black lacquer and it’s matched to a Space Control bridge sitting on an ebony base. This reissue bridge is somewhat modified, but given the original’s notorious reputation for buzzing, sitaring and all manner of sonic annoyances, that may be regarded as a positive.

Again we see TV Jones pickups – this time Classic Filter’Tron humbuckers as befits a late 50s model. Other period-correct features include the ‘G’ stamped control knobs, a teardrop shaped truss rod cover and thumbnail markers set into an ebony fingerboard. From a player’s perspective the key change is the tone switch replacing the conventional tone control.

It provides two pre-set levels of treble roll off and is bypassed in the centre position.

In Use
Unplugged, the Duo Jet has a natural brightness and metallic airy shimmer. It’s also very loud, crisply defined and has fantastic sustain. The ‘U’ profile neck feels contemporary and it’s far shallower than the neck of the vintage 1955 Jet Firebird that we featured in the mag last year.

DeArmond Dynasonics are among our favourite pickups and this encounter with TV Jones’ version doesn’t disappoint. There’s high sensitivity, a very high output, even higher fidelity, and extended treble that never sounds shrill. You should regard the factory’s standard radius matching polepiece arc as a starting point and adjust the slug heights for optimum string-to-string balance. 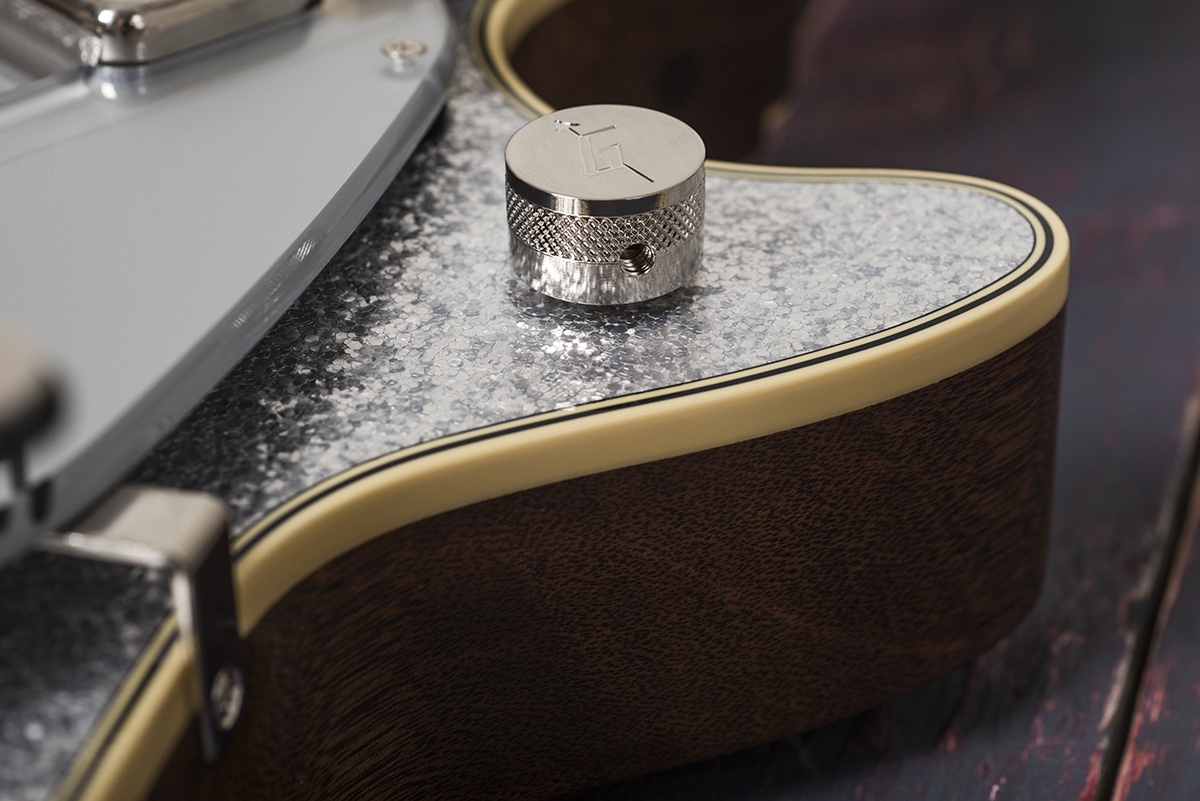 Through vintage-style tweed and Vox amps the Duo Jet’s tone is incredibly evocative. The bridge has a fat Tele-type quack with a throaty midrange resonance that’s not dissimilar to a stuck-wah. The neck has a plummier and more rounded tone with less of the nasal cocked-wah character.

It’s upright piano-like in harmonic content and you can use your pick as an EQ control, such is the shift from flutey roundness to a woody twang as you move from neck to bridge. The middle setting is equally distinctive, with a pronounced phasey midrange and softer transients.

The Dynasonics combine single-coil clarity and treble with the output of hot humbuckers, so they’ll overdrive amps with ease. Whether you’re summoning the spirit of rockabilly or grinding out contemporary rock through a boutique combo, the Duo Jet remains an endlessly fascinating instrument. 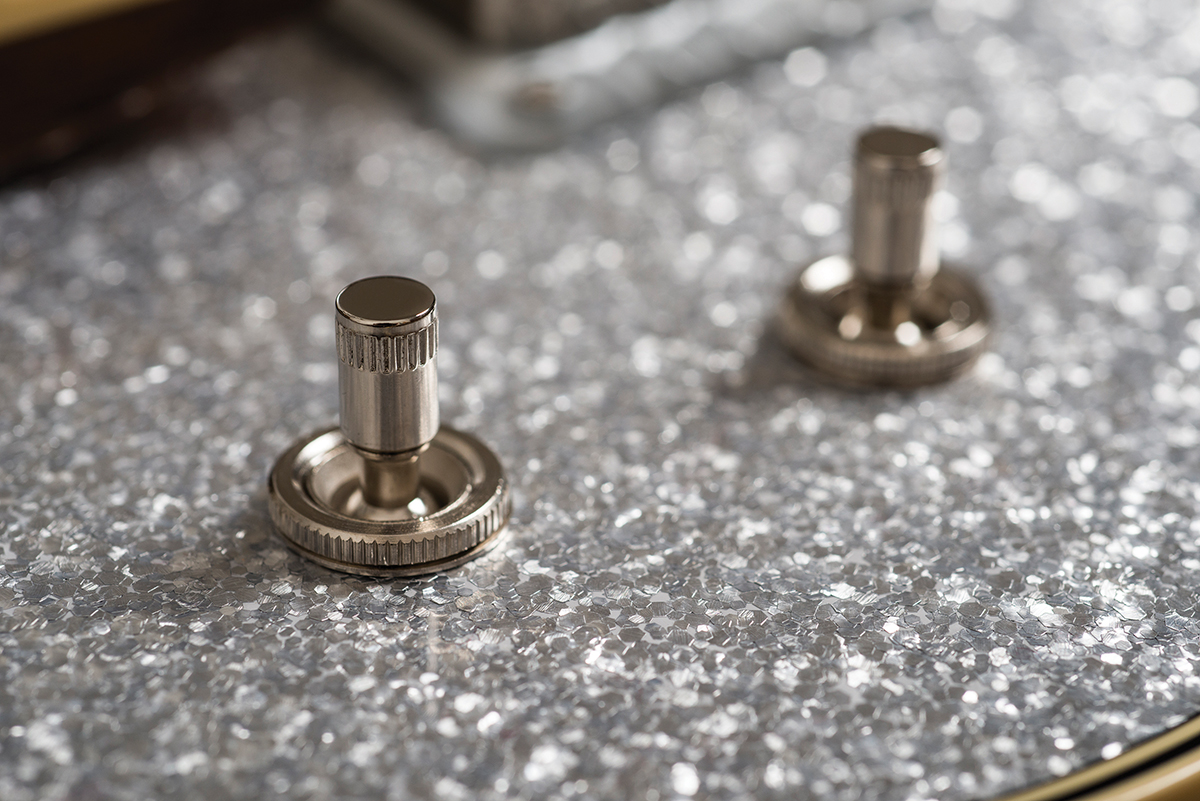 Moving onto the Silver Jet, assuming the bodies are constructed identically, the difference in unplugged tone between the two Jets is remarkable. The ’59 has a thicker, darker and more muted tone that’s closer to a typical ‘solidbody’. Since Gretsch folk can get pretty obsessive about these things, it’s likely we’re hearing the differences between the Bigsby and Space Control bridges, but the Silver Jet is noticeably heavier in physical terms, too. 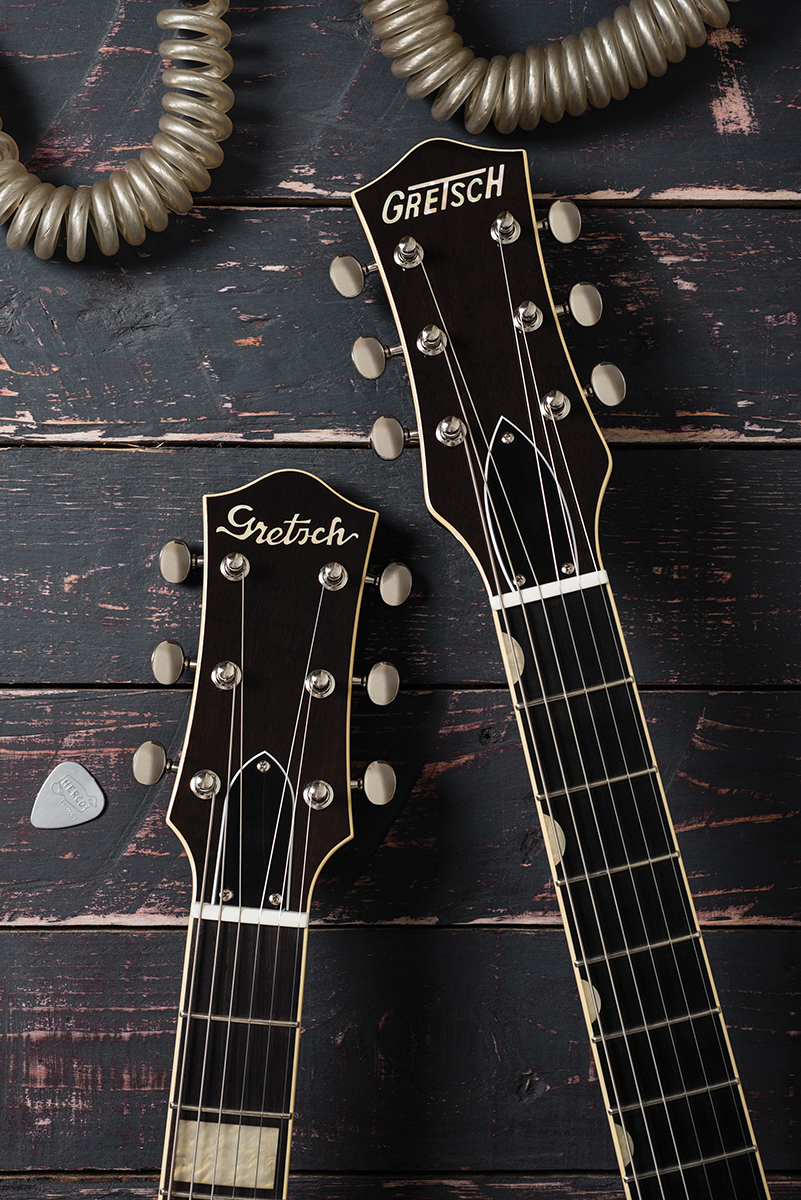 The Silver Jet has a softer and less in-your-face tone that makes it somewhat easier to play than the no-place-to-hide T-Armonds. It’s warmer, smoother and woodier, but perhaps less exciting. For straight-ahead rock rhythm and smooth sustain, the less lively unplugged nature of the Silver Jet and TV Jones’s updated take on Filter’Trons combine to produce a more generally usable tone.

The Duo Jet is pure classic Gretsch, yet while the Silver Jet can deliver those famous Gretschy sounds, you can also dial in tones that are closer to LP Specials and Standards – but always with a hint of hollow warmth.

Some Dynasonic qualities can be detected in the Filter’Trons, such as midrange resonance and twanginess, but they’re less pronounced and the frequency range is narrower. The Filter’Trons are also darker, more aggressive and a little hazier across the upper mids, which is more of a fit for overdrive and distortion. 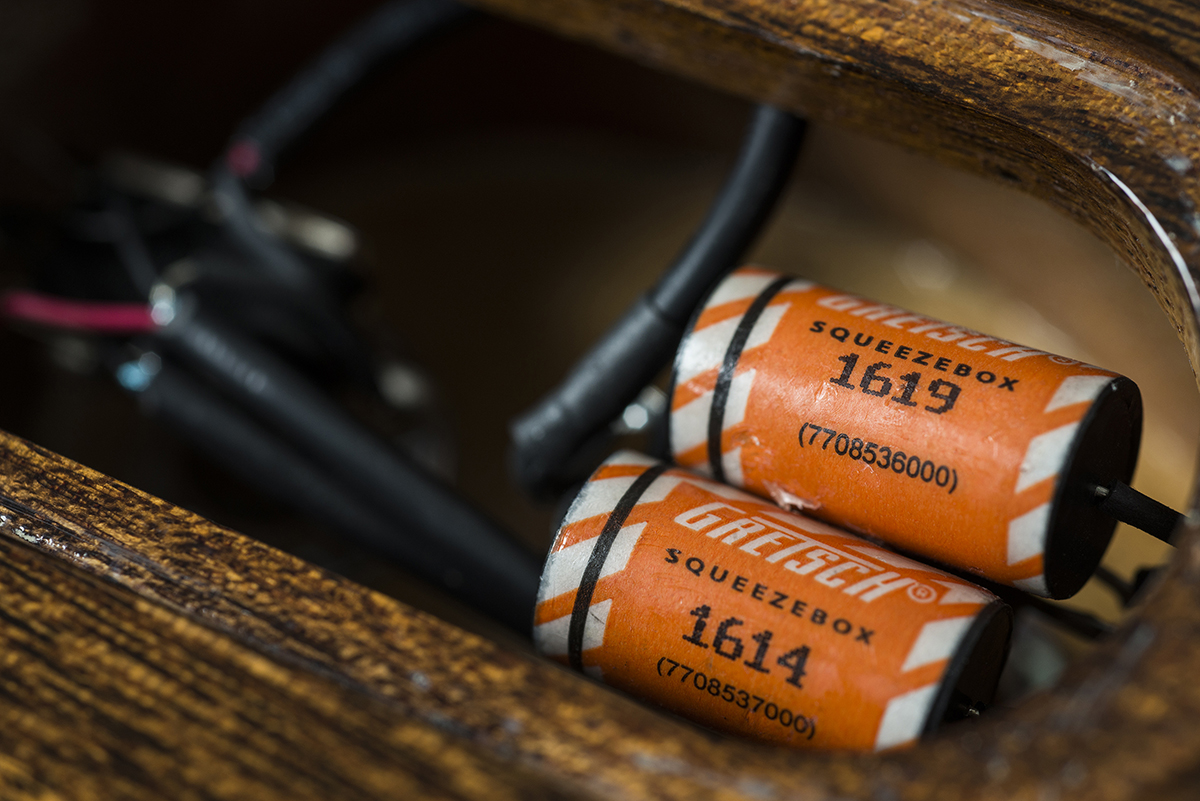 While their retro bridge designs mean you have to give these guitars a bit of leeway in terms of intonation, here the bridges themselves are actually a bit too far forward, so notes fret slightly sharp at the 12th fret. Also sharp are the edges under the Bigsby arms and the springs are soft, so tuning can sometimes be a chore.

But eccentricities are part of the charm of period-correct guitars, and when they look and sound as downright fantastic as this pair do, it’s a price worth paying. 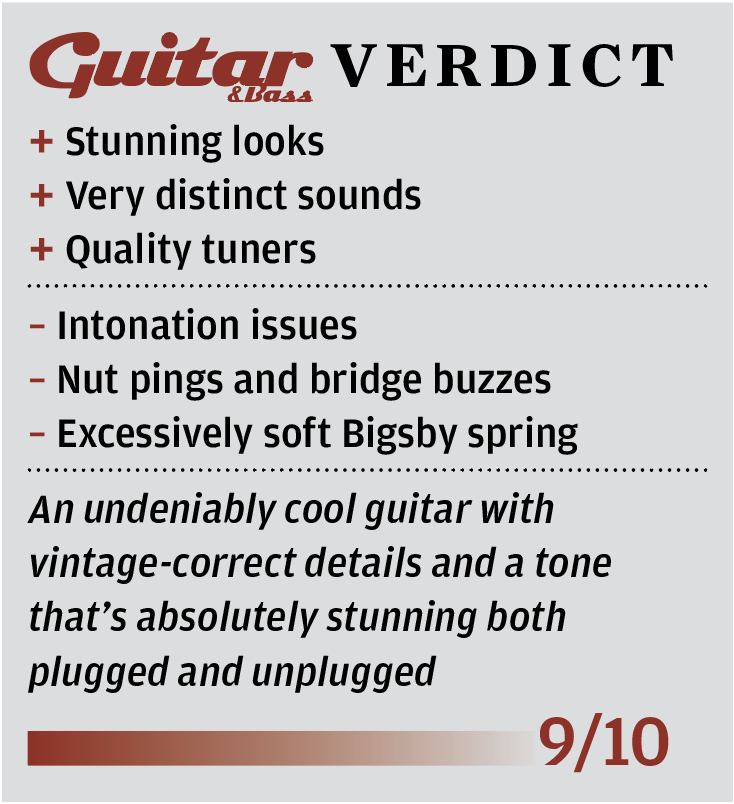 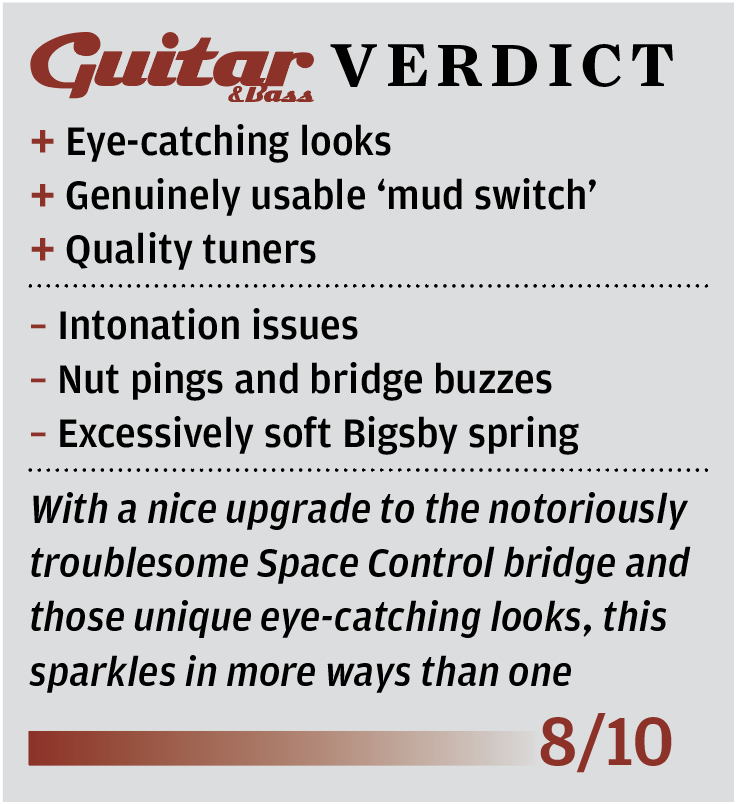