To the uninitiated, all big-bodied, single-cutaway Gretsch archtops look pretty similar in appearance. But Gretsch offers three distinct ranges – Streamliner, Electromatic and Professional Collection – with pricing to match. If twang is your thang, should you opt for a more affordable instrument and upgrade later, or jump in at the deep end? Let us be your guide as we put a trio of Gretsch hollowbodies through their paces… 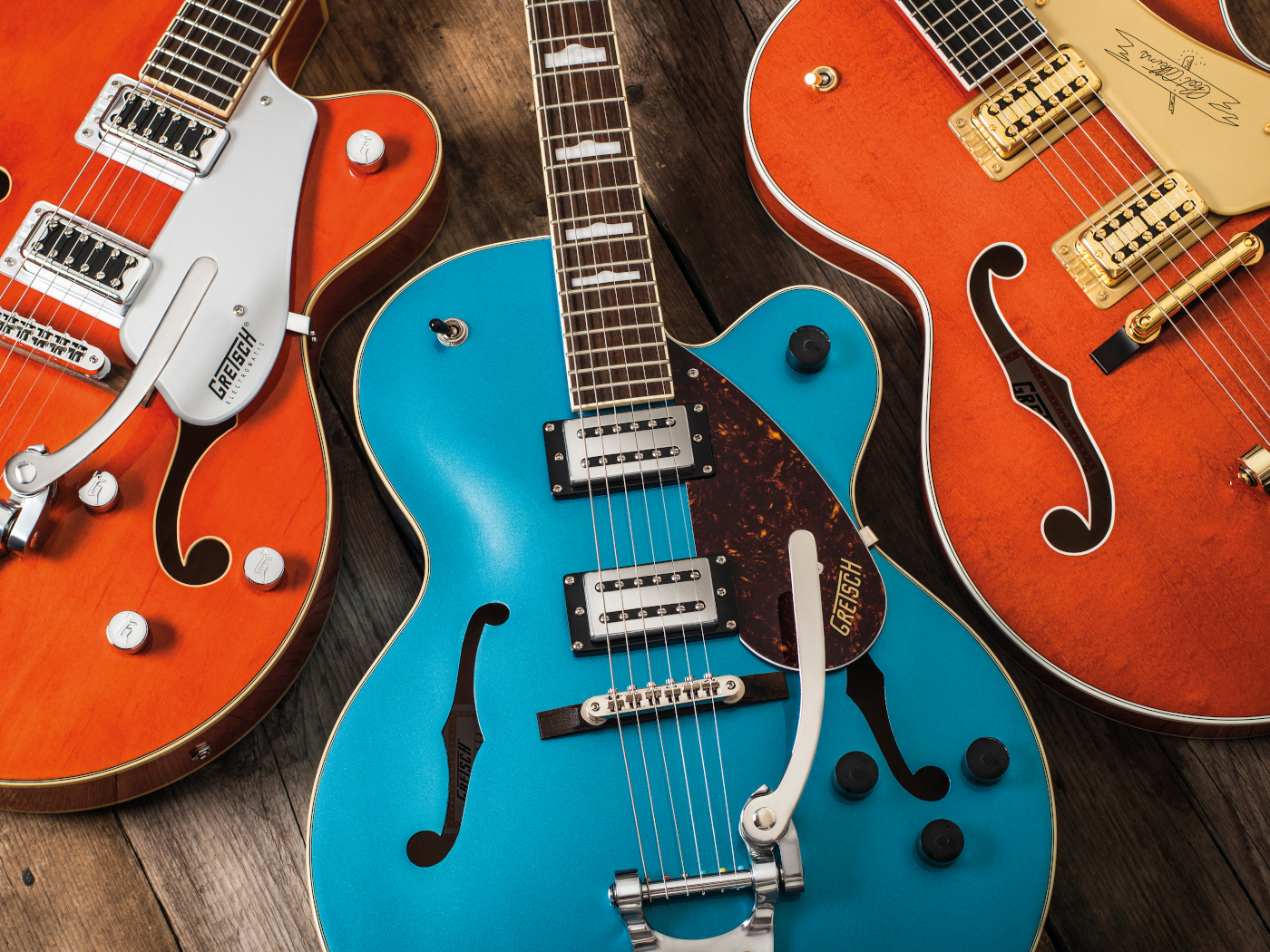 Gretsch’s historic home was in Brooklyn, New York but it has long-since left NYC and like most large-volume guitar manufacturers, the company now has production facilities all over the world. Streamliner models are made in Indonesia, Electromatics in Korea and the high-end models are built in the Terada factory in Japan. At the very top of the tree are the mouthwatering Masterbuilt Custom Shop models made by Stephen Stern and his team in Corona, California.

When it comes to getting the best twang for your buck, it’s not necessarily about spending as much cash as you can. Modifications and hot-rodding have been part of Gretsch culture for years: the Electromatic models – and more recently the Streamliners – are popular platforms for upgrades.

In order to help find the right Gretsch hollowbody for you, we’ve chosen three similarly spec’d production guitars to put under the microscope. The affordable end of the catalogue is represented here by a Rivera Blue G2420T Streamliner (£485). Next up is a G5420T (£989), from the Electromatic Series, with an iconic Orange Stain finish and chrome-plated hardware. Finally, we make the substantial leap to the G6120T Players Edition Nashville (£2,609), with its mellower orange finish and gold-plated hardware.

Although all three lines have been around for a while, there have been some recent changes. The Streamliner series was launched in 2016 and upgraded at the beginning of 2019. A new range of colours was introduced, along with aged multi-ply binding, tortoiseshell pickguards, hump block inlays for the hollow bodies and larger f-holes.

The original Tim Shaw designed Broad’Tron pickups have been updated to create the Broad’Tron BT-2S, with reconfigured windings to improve clarity while increasing output and punch. Early-50s-style clear plastic knobs are fitted, along with Grover-style die-cast tuners. 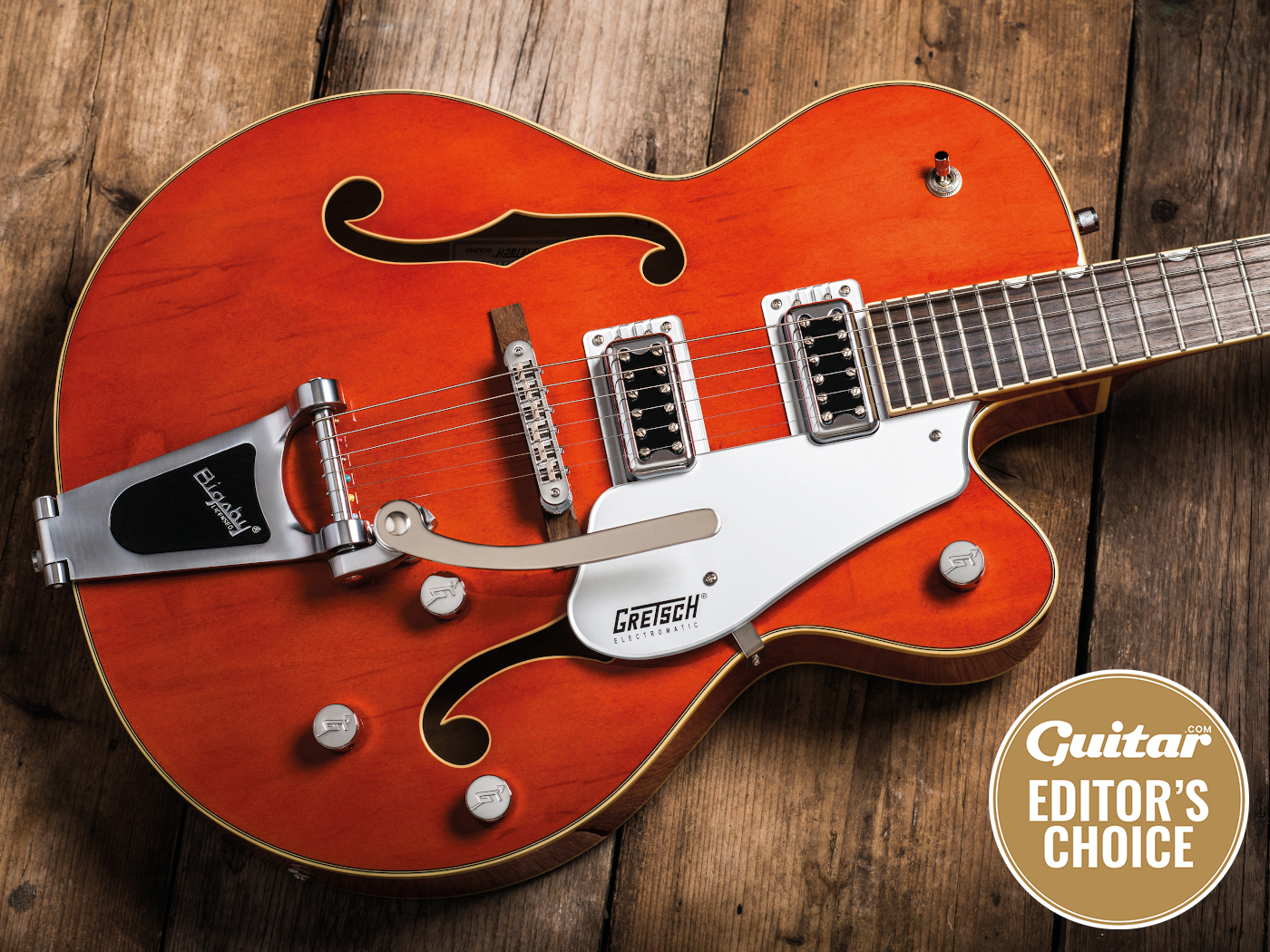 The Electromatic name has deep roots in Gretsch history, but has been used as a series designation since 2004. The current iteration was launched during the summer of 2016, with a sleeker look and the Electromatic logo moved from the headstock to the pickguard. The headstock was changed to the smaller, late-50s outline, with aged binding added. Our review model has chrome hardware and open-geared tuners.

The pickup rings are now vintage-style moulded surrounds, but the Black Top Filter’Tron pickups are suspended from the rings like Gibson humbuckers and there are two screws on the bass side to adjust the angle relative to the strings as well as pickup height. Gretsch also added thumbnail inlays, a treble bleed on the master volume and a bridge that’s secured by drilling two small holes into the top that accommodate the bridge posts protruding from the base of the bridge. 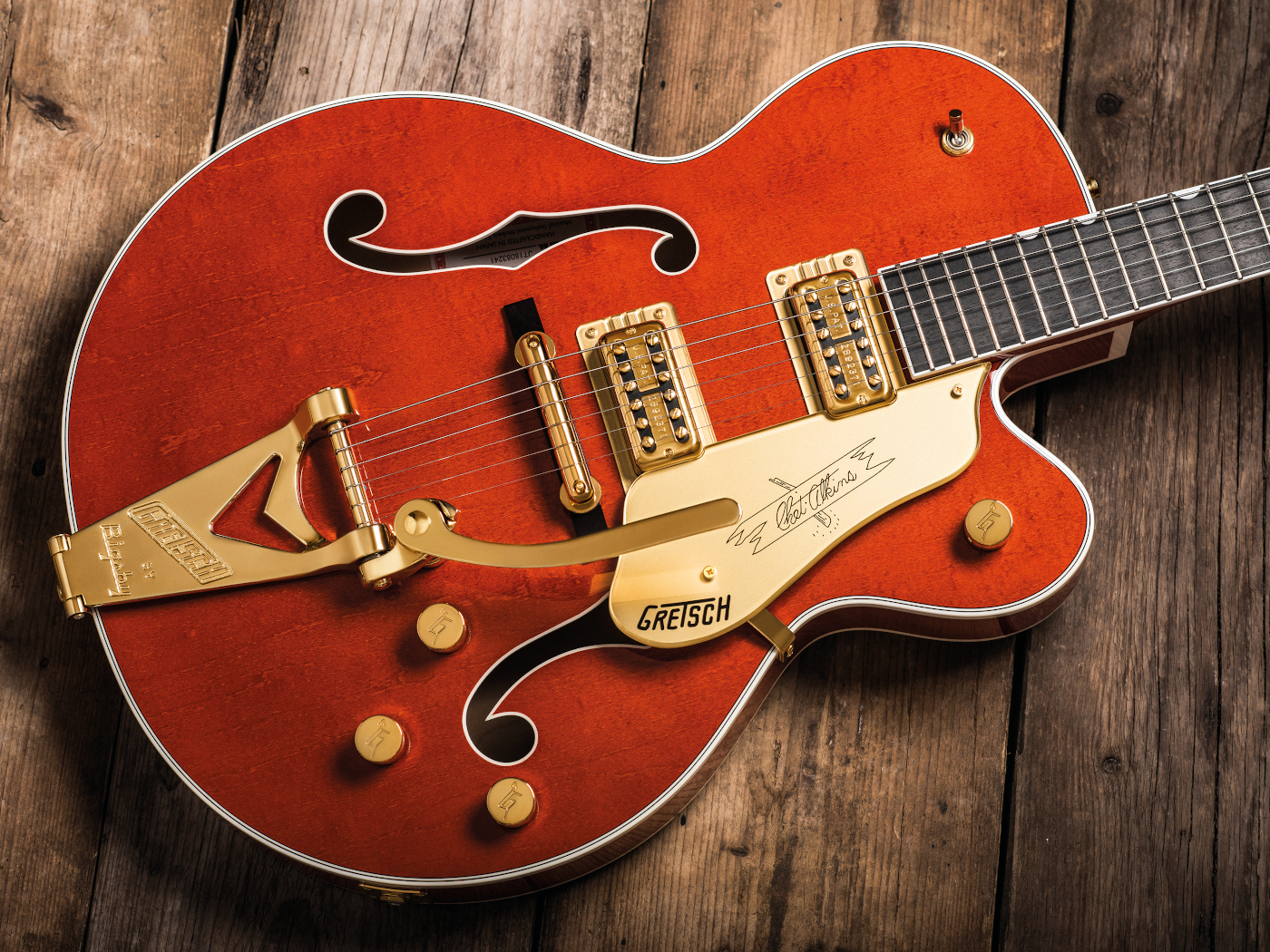 In 2016, Gretsch began organising the Professional Collection into three categories – Vintage Select reissues, Players Edition models with modern featuresets, and the Signature Series. The tagline for the High Sensitive Filter’Tron-equipped Players Edition line-up is “Every Song, Every Night”, with the aim of providing a stable, gig-friendly instrument straight out of the box (something that couldn’t always be claimed of Gretsches of old).

This is enticing news for anybody who has struggled to keep their ball ends latched onto Bigsby pins when they’re re-stringing [ie, everybody except for octopi – Ed]. Pinless Bigsbys allow you to thread strings straight through the roller bar and top wrap – much like a Gibson-style wrapover bridge.

All three guitars here have the same control layout, with a master volume, individual volume controls, a master tone control and a three-way pickup-selector switch. The bodies are maple ply, but the Players Edition is 13mm thinner than the others.

The fingerboards are different too, moving from laurel, to rosewood and finally ebony as prices increase. The Adjusto-Matic bridges on the cheaper models may seem more sophisticated, but the Players Edition bar bridge offers superior tone and we experience no intonation issues.

Despite the similarities in the materials used to build all three guitars, there are significant differences in the way they’re assembled and a quick glimpse through the various f-holes reveals all. 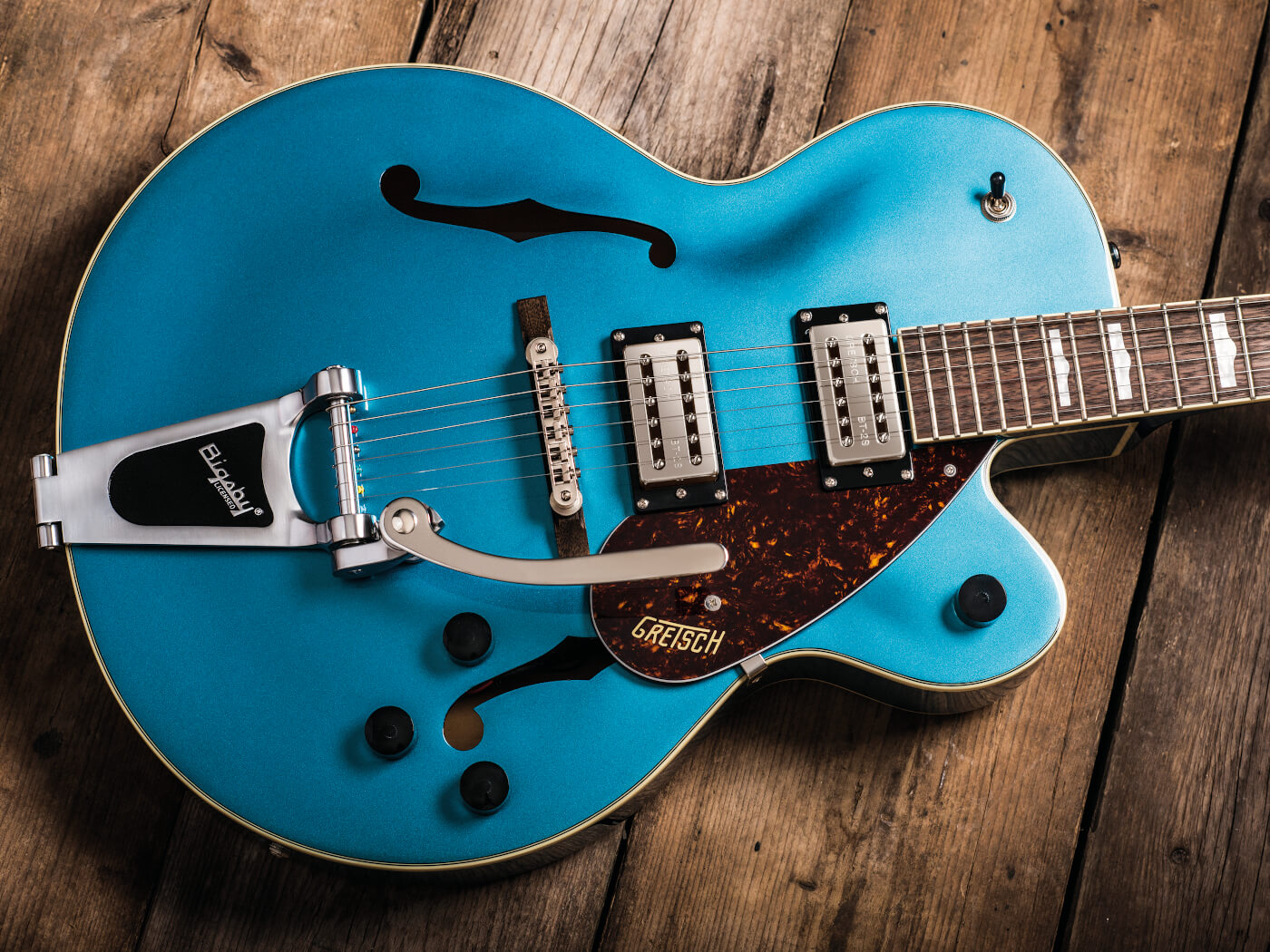 The Streamliner is a bona-fide archtop, with two braces glued to the underside of the top. The Electromatic and Players Edition are constructed in much the same way, but the Electromatic has a substantial post beneath the bridge area that couples the front and back of its body.

The Players Edition has ML bracing, named after the Fender Custom Shop’s Mike Lewis. It’s essentially a chopped-down version of 50s-era trestle bracing – two elongated and inverted L-shaped pieces of spruce that are glued to the underside of the top braces. This also couples the front and back, with just two contact points under the bridge area. True trestles add two more contact points adjacent to the neck block.

All three necks are different. The Streamliner’s is the chunkiest, with a deep ‘U’ shape. The Electromatic’s is a touch slimmer, but still has that flat-shouldered ‘U’ shape, while the Players Edition is the slimmest and most refined of the lot, with softened shoulders and a playing feel not dissimilar to the great Gretsch necks of the 1960s.

Given the similarity in materials and dimensions, the acoustic differences here are unexpectedly profound. If we were assessing the sonic qualities of these guitars from a purely acoustic perspective, the Streamliner might be the winner. By some distance, it’s the loudest, brightest and deepest of the group. There’s a percussive attack, plenty of harmonic content and a frequency range that the Electromatic and Players Edition can’t match.

The trade-off is that it’s very much an old-school archtop tone, with little sustain. Although the Electromatic has a narrower frequency range and more subdued dynamics, the response is far more even, better balanced and it sustains for longer. In other words, it sounds more like an unplugged semi-solid electric guitar. The Players Edition is the quietest of all three acoustically, but it has the best sustain and makes us imagine an ES-335 with a double-depth body. 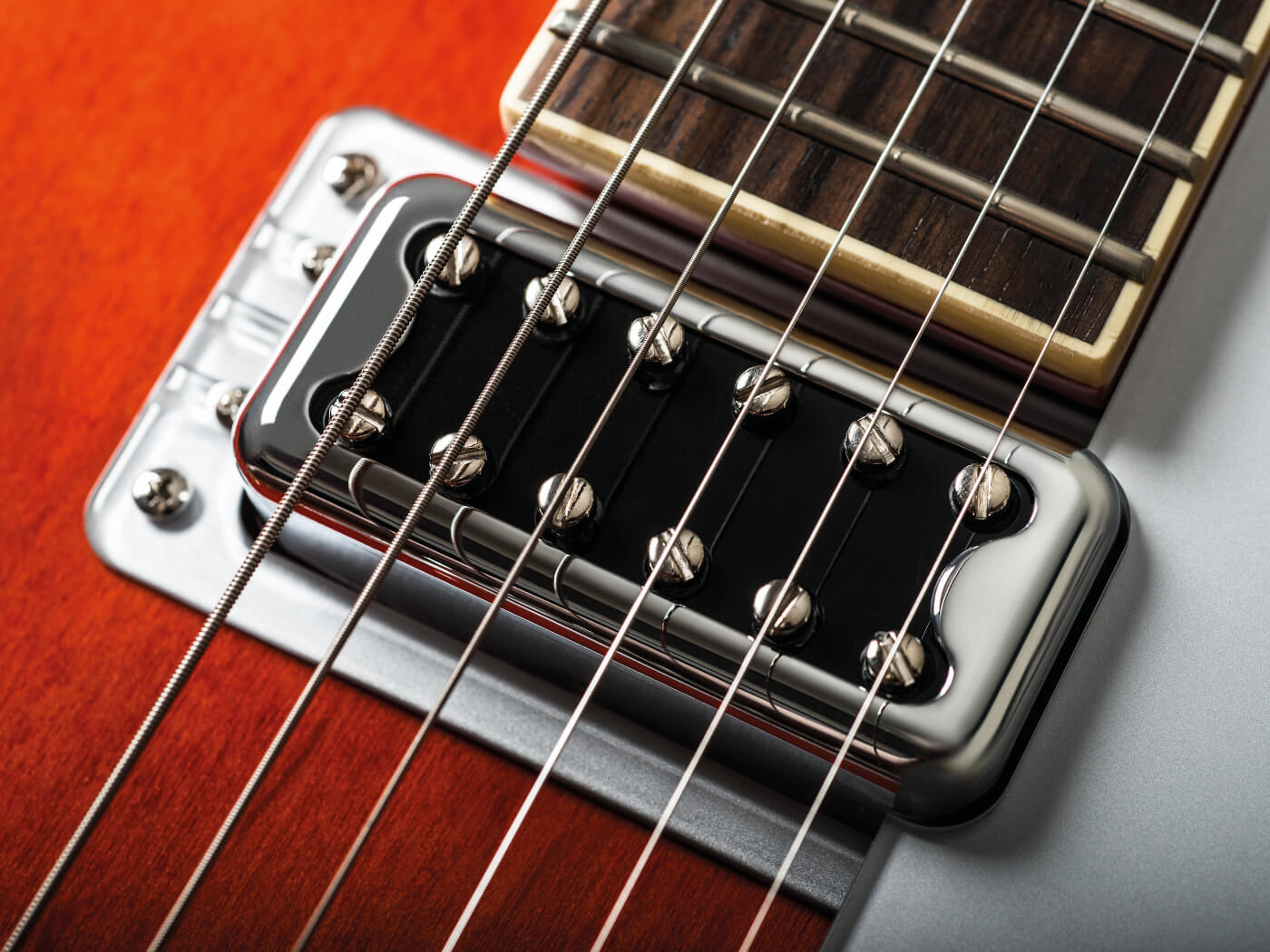 For reference, we compare all three review guitars with our trestle-braced 1960 Anniversary/6120 conversion. Unsurprisingly, the Players Edition sounds closest to the vintage instrument, but the Electromatic runs it close for sustain and has a more vibrant acoustic response.

In most instances, unplugged tone provides some indication of what to expect when you plug in, but in this instance, there are some surprises. It turns out that the Streamliner has far more amplified sustain than expected and the Players Edition is a little hit and miss, depending on which area of the neck you’re playing. The Electromatic has the most even response all along the fretboard.

Filter’Trons are pernickety things and need careful adjustment to get them performing at their best. This has clearly been carried out before the Players Edition model left the factory, but the same cannot be said for the Electromatic. This is important to note if you try one in a shop, because the neck pickup is over 10mm away from the strings and the fillister-head polepiece screws are all screwed down tight. 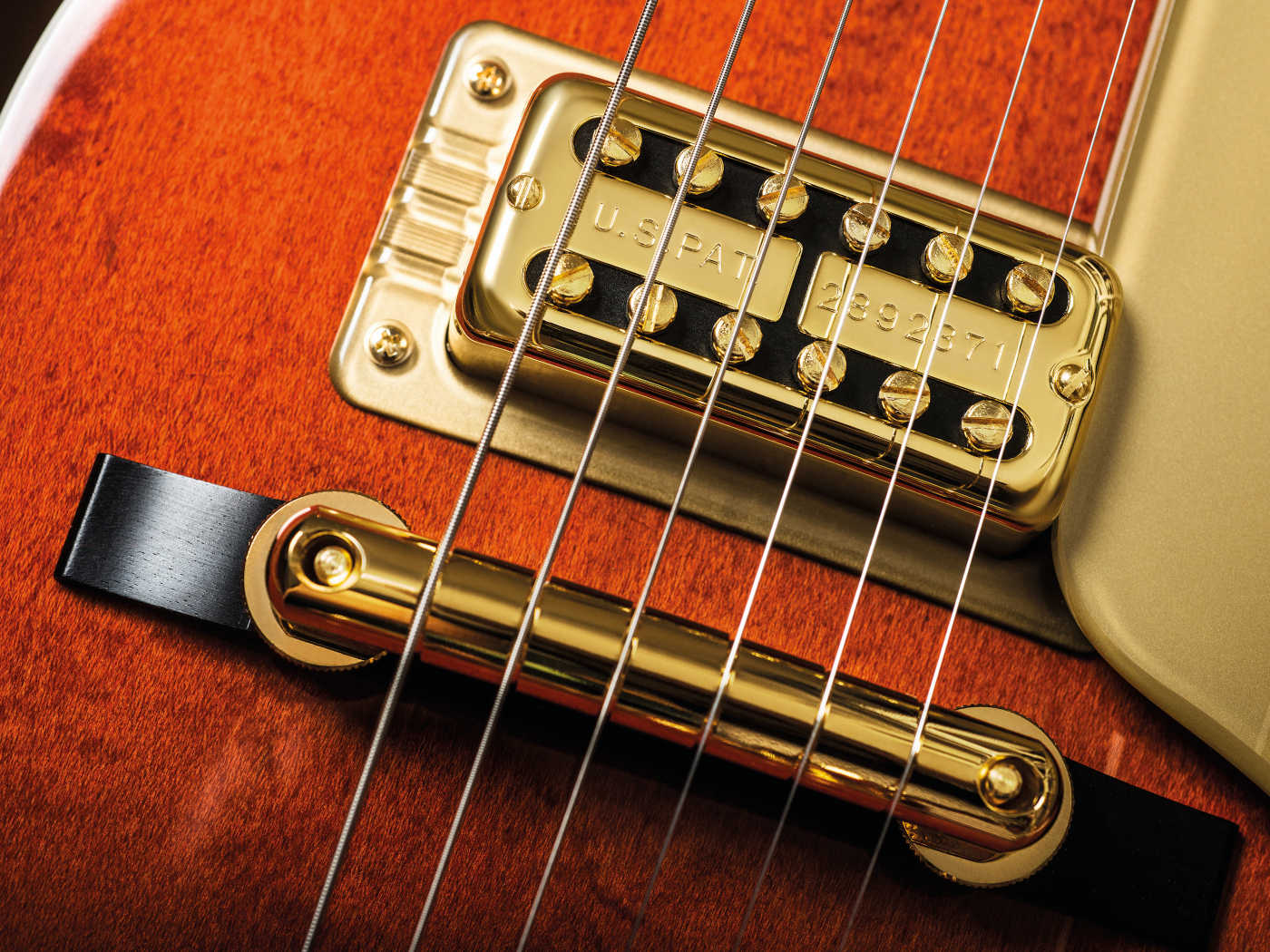 Granted, vintage doesn’t necessarily mean superior, but if you appreciate the sweet but squeaky treble, midrange quack and jazzy but clear roundness of Brian Setzer’s tone, the Blacktops are the ones to go for. That said, the High Sensitives sound clearer, brighter and provide more bite and cut. It’s a contemporary take on classic Gretsch tone that scythes effortlessly through stompbox chains and high-gain amps.

The Broad’Tron BT-2S units in the Streamliner certainly have a passing resemblance to Filter’Trons – especially on the bridge and middle settings, with their diffused midrange scoop. They’re like a grainier, louder and slightly brasher variation, but we find the neck pickup a bit thick and lacking in clarity. This is an enjoyable and thoroughly usable guitar, but we’re not entirely convinced that the BT-2S is a big improvement on the original 2016 Tim Shaw designed Broad’Trons.

Which should I buy?

There’s no denying that the Streamliner is great value for money and a wonderful entrée into Gretsch culture. We love the colour options and there is upgrade potential – if you’re so inclined. More authentic Filter’Tron replicas are available in full-size humbucker dimensions and if the plastic parts bother you, changing to Gretsch metal knobs and a metal switch tip is both easy and affordable. 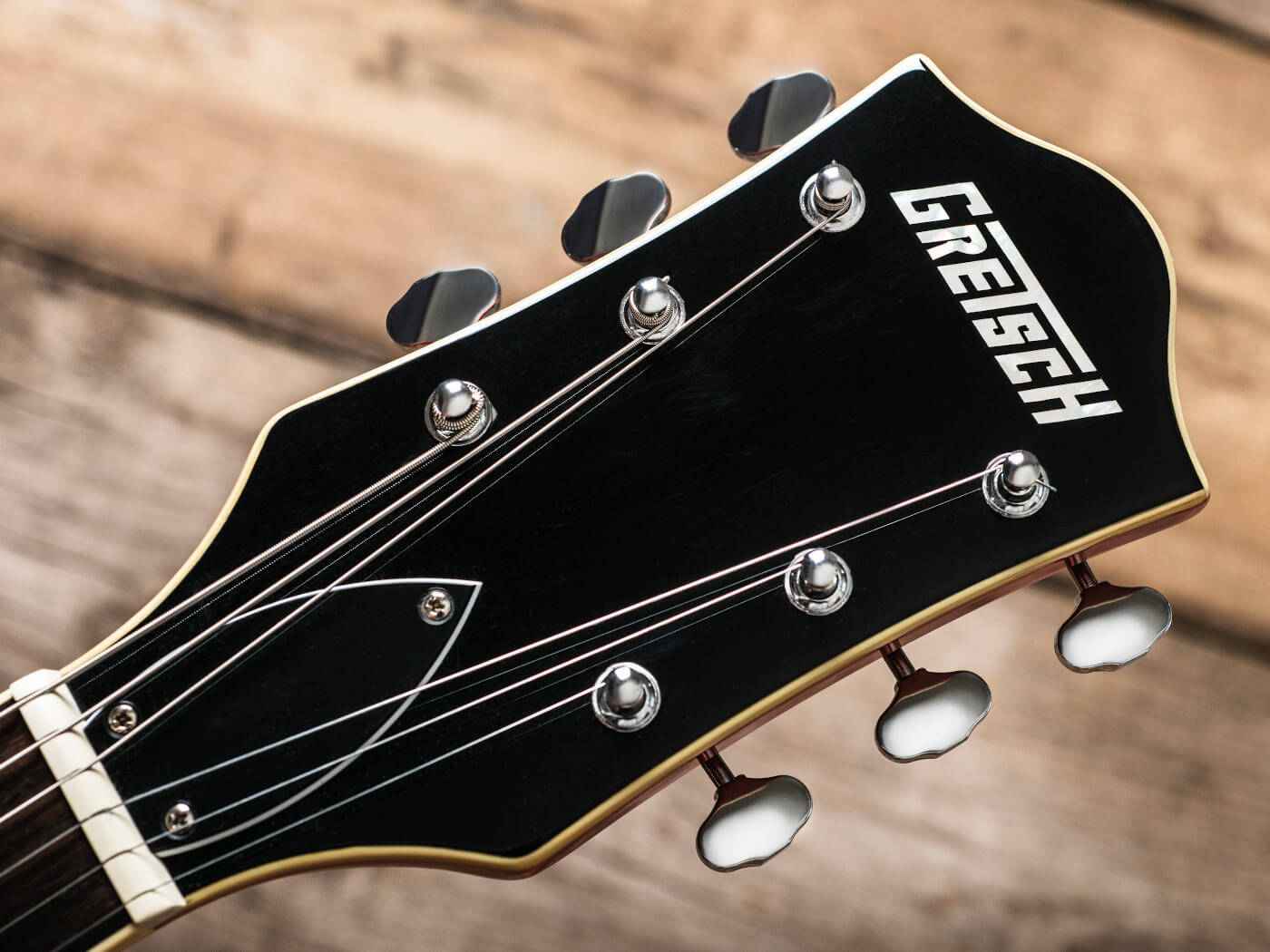 The Electromatic has upgrade potential too, but with thumbnail markers, full-sized bound f-holes and metal hardware already installed, you’re starting from a much higher level. We would be inclined to go for a bar bridge from the likes of Tru-Arc or Compton, and might consider a V-cut Bigsby and aftermarket pickguard to complete the look, too. As for the pickups, while we think that traditional Filter’Tron covers would enhance the look, we’d be in no hurry to swap out the Blacktops. 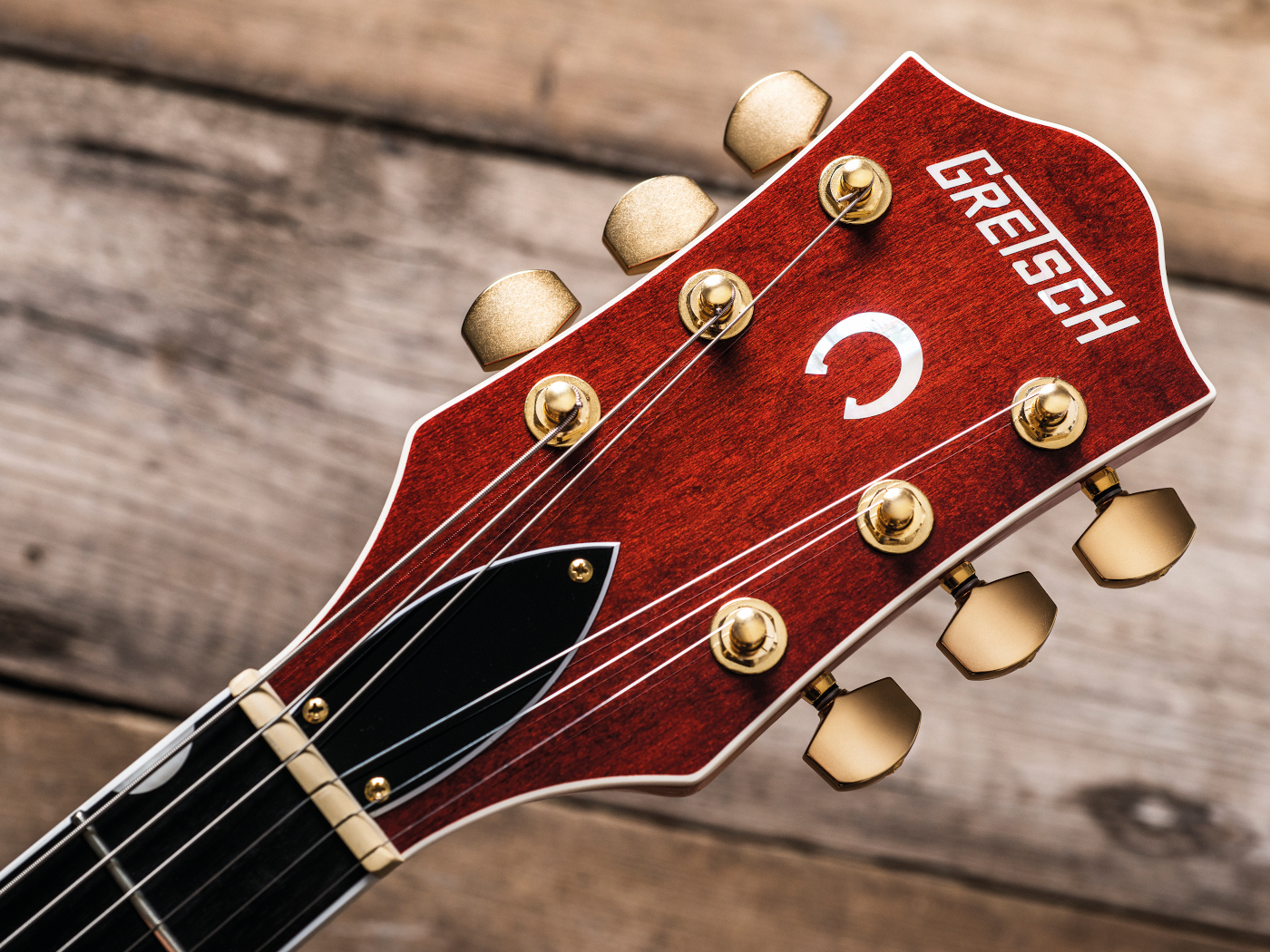 The Players Edition has superior build and finish quality and it’s the most highly equipped, but you’re being asked to pay a significant premium. You do get halfway to 50s-style trestle braces, and retrofitting those to a Streamliner or Electromatic isn’t a viable option. Fortunately, the Electromatic’s bridge post performs much the same function, so it’s not a deal breaker.

Gretsch is currently offering fine guitars at every price point. If you want the best and you have the budget, the Players Edition won’t disappoint. At the other end of the spectrum, the Streamliner may prove to be the Gretsch equivalent of a gateway drug, opening your ears and mind to an inspirational new world. But for tone, upgradability, customisation potential and sheer value, we’d be inclined to go for an Electromatic.