Looking for Firebird stylings in a less intimidating form factor? This artful new single-cut design from Neil Ivison could be the easier ride you desire. 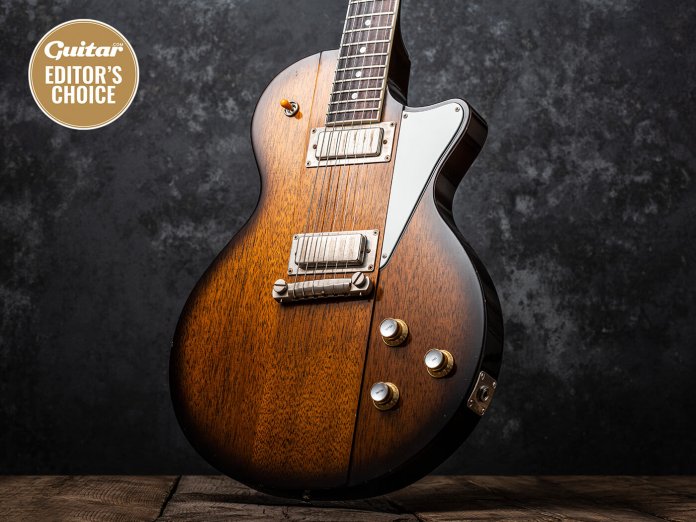 From Gene Baker’s B3 Phoenix to Joe Bonamassa’s Bonabyrd Les Paul, electric guitars that combine Firebird stylings with more traditional body outlines are nothing new. The Ivison Dakota, however, might just be the most engaging and downright cool variation on the theme we’ve encountered to date.

“It stemmed from me loving the Firebird sound but not getting on with the ergonomics”, Neil Ivison explains. “It takes a certain person to pull off a Firebird and while I would love to think I’m that sort of person, in reality I’m not. ‘It can’t just be me,’ I thought, ‘so how can I make this work?’

“My Hurricane body shape had been well received so I thought I’d adapt that and try a set of mini-humbuckers. Pretty soon I realised I had a platform for all the Firebird variations but in a more familiar single-cut format.”

Rather than having a Reverse Firebird-style through-neck, the Dakota is built around a mahogany centre-block with with glued on wings made from the offcuts from Ivison’s Hurricane body blanks. Fortunately, Neil had been hoarding them because he couldn’t bring himself to throw away good wood. The wings have less depth than the centre block and, by making the surfaces flush at the back, Ivison achieves a raised central section. The one-piece mahogany neck is glued into the centre block using a traditional long tenon joint.

Depending on their position in Gibson’s hierarchy, Firebirds came with various bridges. The Firebird I and III had wraptails rather than the tune-o-matic bridges of the V and VII models. Seen as technically inferior at the time in terms of intonation, many players now consider wrapover bridges to be sonically superior. For the Dakota, Ivison has opted for an aluminium Faber wraptail with intonation compensation.

Celluloid dots rather than trapezoid blocks are Firebird I and II features and here, the rosewood board has dots and white binding. Ivison has wisely retained his own headstock shape, but a raised black centre section contrasts with thinner mahogany wings in another subtle nod to the Dakota’s inspiration.

One vintage Firebird design feature Ivison has veered away from is the Gibson’s rather cluttered control layout and front-mounted jack socket. Instead, Neil has opted to mount the socket on the side of the body, but the asymmetrical control arrangement retains some flavour of the original. Here we have two volume controls just below the centre-section line and a master tone nearer the body edge.

The scaled down pickguard is an inspired touch. Ivison has sourced appropriate off-white three-ply plastic and if you look closely, you’ll notice a little kink at the start of the waist where the angle changes. This allows the pickguard to end up at the back edge of the bridge pickup ring – just like a Gibson Firebird.

Neil is one of those rare guitar builders who can carve a convincing 1950s Gibson-style neck profile, but here we have something a little different. “I slimmed it down a bit because the Firebird is a 1960s guitar and I don’t want to keep repeating myself”, he tells us. As a result, the Dakota has a full roundness, with no hint of a V, but the shoulders are soft and it’s more like a 1950s/60s hybrid than the wide and slim profile you’d likely find on a Firebird from 1963-65.

With the deep-set neck and regular tuners, the Dakota is both lightweight and balanced. It feels more like a 1950s Les Paul Special than either a Firebird or Les Paul Standard, and there’s absolutely no neck heaviness. A lightweight mahogany body coupled with a set neck and a wraptail is about as close to a safe bet as you can get in guitar-making, but the Dakota meets expectations and then some. Unplugged it’s loud, balanced, dynamically responsive and has a woody, mellow brightness.

All these characteristics come through in the Dakota’s unfamiliar but fascinating SunBird pickups. But what’s the difference between Firebird pickups and regular mini-humbuckers? Let Stuart Robson explain.

“A classic humbucker, mini-humbucker or P-90 employs horizontally loaded bar magnets to ‘charge’ screws or slugs that in turn sit vertically under the strings,” he says. “The Firebird pickup takes a totally different approach by instead using a bar magnet within each of its two coils and orientating them vertically across the full width of the pickup. On top of that oddity there’s also a ferrous plate directly under those magnets in a manner that bears some resemblance to a Tele bridge pickup.”

Going head-to-head with a 1955 Special, the SunBirds have a lower output and are leaner through the mids but they display greater clarity and breadth of tone, and there’s more going on harmonically. In that sense they’re closer to the vintage PAFs in our Les Paul Standard and they have a similarly expressive dynamic response and greater midrange transparency. P-90s generally hand you rock ’n’ roll tone on a plate, which is more than sufficient for many players. The SunBirds, meanwhile, make you work a little harder for sustain and overdrive but their complexity continually surprises and inspires.

Firebird pickups are often described as having Strat-like qualities, largely due to their clarity and brightness. This is fair comment in the neck position, but less so at the bridge, which has a wiry snarl with a hint of nasality. As a set we’d place these pickups somewhere between low-output PAFs and DeArmond Dynasonics.

With overdrive, the Dakota absolutely nails classic Southern rock and Johnny Winter tones. But played clean, you get a hi-fi clarity with articulate attack, ample low end and the sweetest treble. There’s also a pleasing contrast between the bridge and neck settings, with the neck position having an almost semi-acoustic quality.

The Dakota somehow manages to capture the Firebird spirit without directly copying any Firebird features. It also sounds like a Firebird but plays and feels more like a Les Paul Special, so you can scratch that Firebird itch without having to put up with the original’s design quirks.

We only have two minor complaints: the fretboard binding appears a little too thick, and we would prefer to swap the position of the bridge volume and tone controls, because single-cut autopilot keeps compelling us to reach for the wrong one. However, Neil actually agrees on both counts, and assures us that customers can specify the control layout – just like the neck profile, pickup complement and bridge/vibrato options. 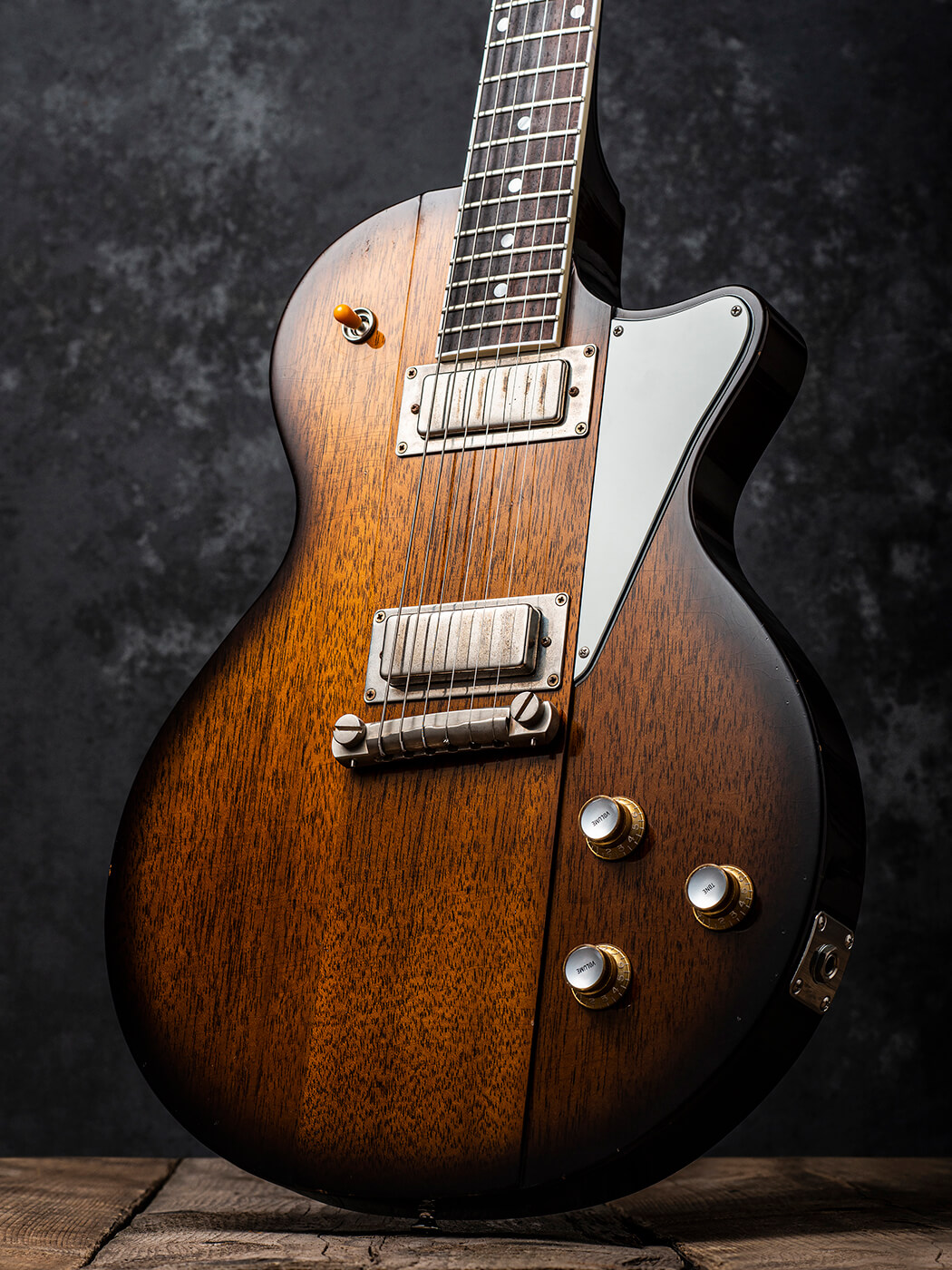