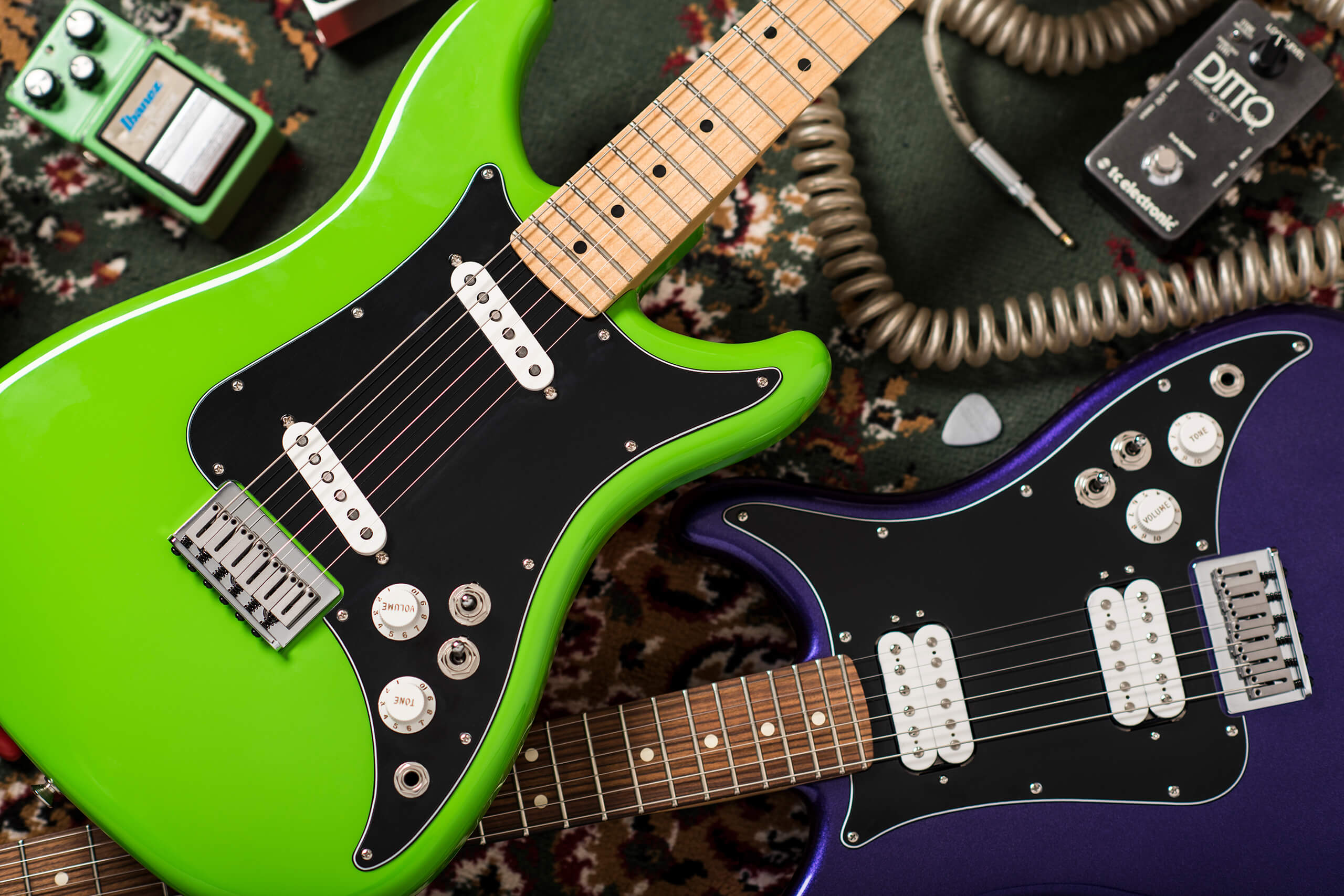 As Fender reboots its near-forgotten Lead Series with some striking colour options, we ask whether these stripped-back strummers are good enough to justify their revival.

Don’t worry, you’re not hallucinating – these colours are real. Fender has largely played things straight with its latest not-exactly-classic reissues, keeping the core specs of the Lead II and Lead III models much as they were 38 years ago. But lesser-known styles such as these are fair game when it comes to having fun with finishes – and ‘fun’ is the operative word here. We haven’t seen a green or purple as vivid as this since we stopped writing with crayons.

Fortunately for those in danger of reissuing their breakfast as a result of these lurid hues, there are more sober (and vintage-correct) options for both guitars: Black or Crimson Red Transparent for the single-coil model, and Olympic White or Sienna Sunburst for the humbucker-packing Lead III.

Let’s get some context. Between 1979 and the launch of Fender Japan in 1982, the Leads filled a simple niche at the low end of the company’s all-American six-string range: they were no-frills axes for the post-punk era, combining Stratocaster stylings with the simplicity of the Telecaster. Their legacy is hardly in the same league as either of those guitar giants, of course, but that makes them perfect candidates for the modern Mexican-built Player Series.

Coming in just under the £600 mark, we get the Lead II, which looks uncannily like the 1979 original, right down to the blocky headstock logo and cramped pickup switches, and the Lead III, with the same coil-split-equipped twin-humbucker configuration as its 1982 ancestor.

“‘Fun’ is the operative word here”

They may look rather like student guitars, but both models have Fender’s full 25.5-inch scale length and, thanks to the aforementioned switches, some handy tonal options. The extra toggle on the Lead II is a phase-flipper for quacky cancellation in the middle position, while the one on the Lead III can be used to put either pickup (but not both) into single-coil mode.

The basic body shape isn’t likely to alienate longtime Fender fanatics, with a Strat-style double cutaway and a generous belly-carve swooshed out of the back. Alder and maple construction keeps things classic (you get a maple or pau ferro board depending on the finish), and the bridge is functional Fender at its best: a simple hardtail with six solid saddles, three screws holding it in place and the strings running through the body.

In terms of the pickups, we’re in familiar territory once again, at least with the Lead II, whose pickups are both fitted at a dynamic slant and are the same alnico V units you’ll find in the Player Stratocaster. The Lead III’s alnico II humbuckers, meanwhile, are shared with the Player Stratocaster HSS and Jazzmaster. It’s safe to say we’re not expecting these guitars to sound quite as far-out as they look.

Jelly babies, party balloons, Lego’s Friends Baking Competition Playset – if it’s brightly coloured and affordable, it’s probably aimed at young people. With that in mind, it’s no surprise that the new Fender Leads are easy, straight-down-the-middle players. The satin-finished ‘medium C’ necks and medium-jumbo frets are gently welcoming to all, especially with their .009-.042 strings, and both our test guitars are set up with novice-friendly low actions.

Acoustically, they’re both on the lightweight side, with the Lead II offering a touch more zing and the Lead III countering with a more solid midrange. Let’s see how the pickups translate that into neighbour-bothering rock.

The Strat-like qualities suggested by the Lead II’s specifications are very much present and correct. Clean tones are brisk and characterful, with lots of slappy attitude when you dig in on individual notes. There’s certainly no shortage of treble on either pickup, and we soon find ourselves dialling the tone control down to about six or seven for a more balanced response.

There’s a fair amount of phasey complexity on the bridge pickup, but even more in the middle position – a setting that, remember, Fender’s three-pickup icon doesn’t normally support. This is where the Lead II really excels as a Strat-Tele hybrid, combining the breezy freshness of the former with the chiming sweetness of the latter.

Then we flip the phase switch and are greeted by a quack so extreme it feels like being attacked by angry mallards. It’s not clear whether the average player will have any use for a sound as hollowed out as this, but it could be a cool thing to have in the locker nevertheless.

As we make the transition from gaudy green to violent violet, it’s worth mentioning that the toggle switches on both of these guitars are a bit of a pain. They’re very close together and feel stubby and uncertain, and, as we mentioned earlier, the coil-splitter on the Lead III does not include an option for running both pickups in their slimmed-down states together.

Still, there’s not a lot wrong with this instrument in full humbucking mode. Predictably, it’s much darker than the Lead II, and all three positions offer chunky yet articulate tones that work well with a dollop of Marshall-style overdrive for old-school Superstrat lead work.

The clean stuff is nice too but there’s a surprise in store when we activate the coil-split on either pickup: the lower mids thin out as expected but not in a way that leaves the guitar sounding in any way underpowered. The top end actually seems to expand to fill the gap and suddenly the Lead III becomes even more bright and spiky than the Lead II. This could be useful but, as before, you’re likely to be reaching for the tone control to keep things balanced, so make sure you’re ready to whip it up to 10 again when you bring back the second coil.

“Clean tones are brisk and characterful, with lots of slappy attitude when you dig in”

That’s a decent selection of tones from a solidly built pair of instruments, with a few quirks but no deal-breaking flaws. The only thing missing from this reborn range, in fact, is the Lead I model with its single, splittable, series/parallel-switchable humbucker. Now that would look lovely in pink… 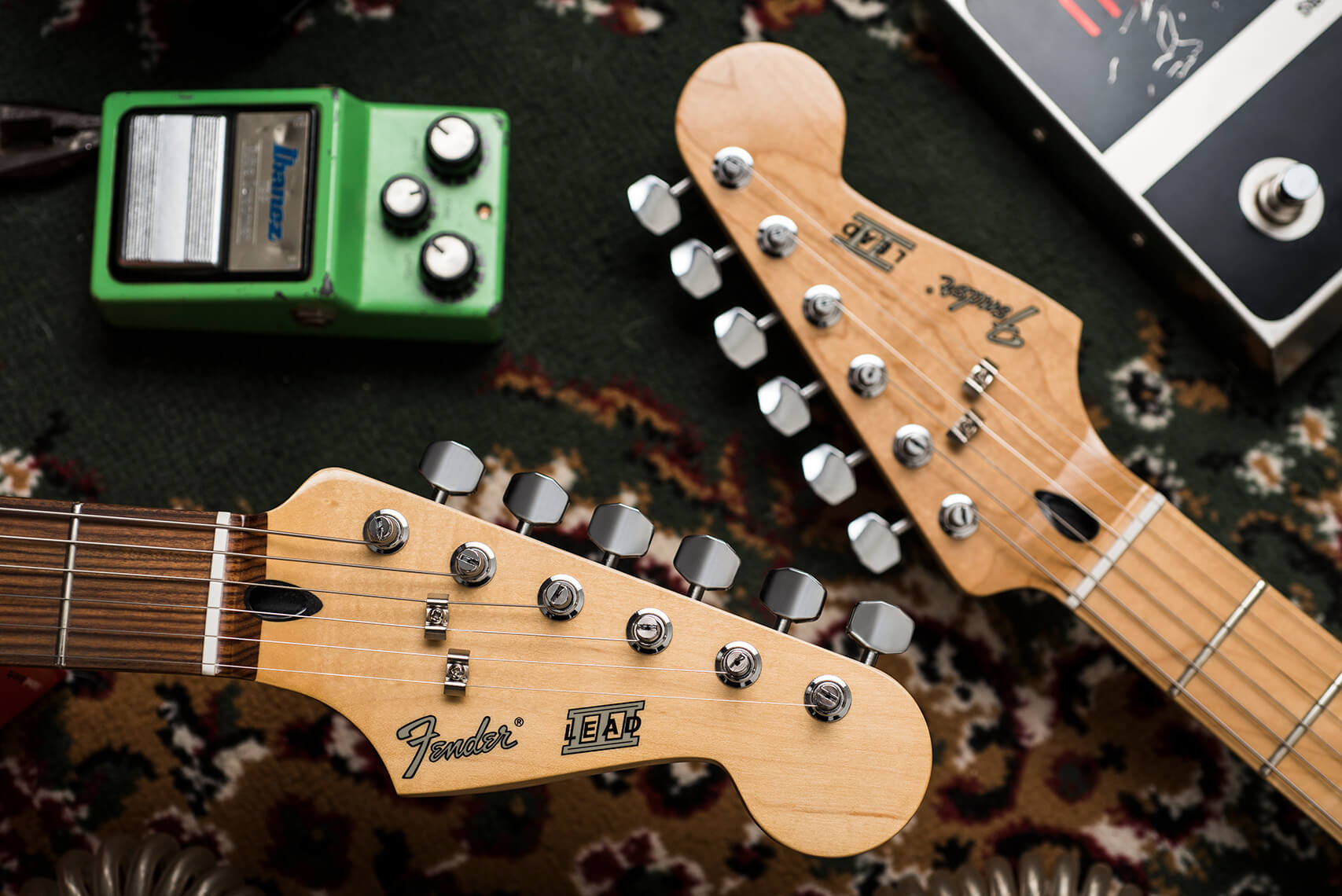