Public Service Broadcasting and The Horrors are fans, and Dave Grohl was recently seen playing one. If you’re looking for an inspiring retro electric with an identity all of its own, it’s time to get hip to Fidelity Guitars. 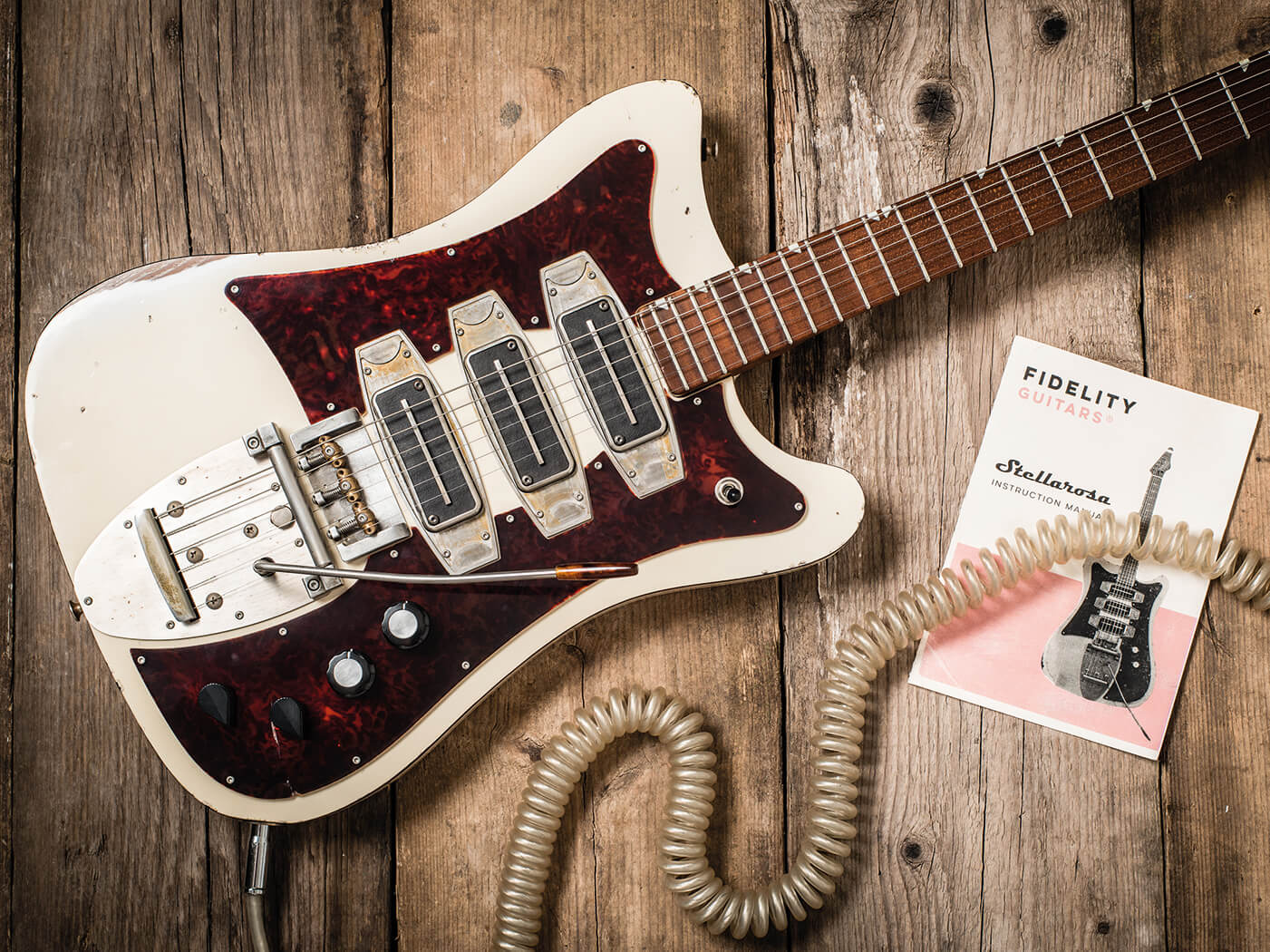 Even by modern boutique standards, Fidelity’s individuality is an inspiring breath of fresh air

It’s not unknown for boutique guitar manufacturers to go deep into the well for inspiration, but not too many builders are referencing the Japanese-made Stella Japonica, made in very small numbers at the dawn of the 1960s. Yet that’s exactly what inspired the Fidelity Stellarosa – a collaboration between Fidelity Guitars owner and luthier Matt Oram and Mojo Pickups mainman Marc Ransley.

As the decal at the rear of the Stellarosa confirms, Fidelity Guitars are handcrafted in Cambridgeshire, UK. With each instrument made to order, the current lead time is around six to eight weeks. The range also comprises the JB and Double Standard electrics and the Thundermaker bass, but the Stellarosa sits at the top of the tree, taking the catalogue-guitar aesthetic of the rest of the line and adding custom metalwork, unique electronics and celluloid tortoiseshell binding.

Indeed, there’s a lot of tortoiseshell on display here, with the double-pickguard (3mm acrylic this time) certain to polarise opinion. We love it, along with the medium-aged Olympic White gloss nitro finish. Although the 40mm-deep body is chambered swamp ash with a torrefied swamp-ash top, our review guitar still weighs in at a substantial 9.2lb. Happily, it balances superbly on the supplied Heistercamp strap – with so much metalwork at the body end and Fidelity’s compact headstock design, there’s precious little chance of neck dive.

A trio of Mojo’s P-90-sized Charlie Christian pickups are housed in custom metal surrounds and adjustments are made – along with almost every other screw or bolt on the guitar – via Torx-head screws. If, like us, you have an untidy tool drawer that only contains Phillips and flat-head screwdrivers and an assortment of mystery Allen keys, you’ll be relieved to find Fidelity has included the tools you need in the Hiscox case.

The bridge is Matt Oram’s own billet aluminium design that’s backless to facilitate use with a vibrato, with a trio of brass Gotoh SW-3 saddles. The vibrato in question is actually a Fender USA unit, although Oram has customised the top plate and fitted a Bigsby B7-style tension bar to increase the break angle across the saddles and help promote sustain.

The neck bolts are screwed into threaded-steel inserts (Matt recently made the switch from brass to steel following a few issues with brass being too soft), while the neck itself is one piece of torrefied maple with a zebrawood ‘skunk stripe’. The oil-finished maple smells as good as it looks and its deep caramel hue suggests that the level of heat treatment applied by the chef was ‘well done’, rather than ‘medium rare’.

The fret ends and fingerboard edges have been rounded beautifully for maximum player comfort and we suspect the Stellarosa offers a somewhat smoother playing experience than the old Stella Japonica that inspired it. That said, the neck carve is somewhat unconventional – the stated ‘medium C’ doesn’t have the most uniform taper and actually loses around 0.4mm of depth between the first and third frets before fattening up again around the fourth.

The string spacing of 33.5mm at the nut might be a little tight for some, while the third (G)-string slot in the bone nut has been cut slightly wide, with lateral movement from bends causing occasional pings. That said, the combination of a 25-inch scale, 0.011-gauge strings and the compound 9.5-14-inch ’board radius makes for a great balance of fight and fluidity all over the neck.

This isn’t exactly this writer’s first rodeo when it comes to reviewing electric guitars and it’s not often we have to consult the manual. However, Fidelity’s vintage-style instruction booklet does a fine job of lifting the lid on how the potentially bewildering combination of controls shapes the Stellarosa’s sound. The master volume (with treble bleed) and no-load tone controls are self-explanatory, while the two-position toggle switch selects between circuits A and B, with each circuit offering a quartet of tones via individual four-position rotary selectors (the rear pointer knobs).

We quickly get our head around the controls and the Stellarosa excels into a heady brew of light overdrive, hall reverb and tube-style tremolo provided by our RYRA Klone and Strymon Flint, with the attack and clarity of the Mojo Charlie Christian pickups maintaining definition. The tone control works brilliantly, too, introducing a midrange honk when dialled back that growls in a deeply satisfying manner, but doesn’t get too swampy when surrounded by ambience and modulation.

With more restrained effects settings and a clean amp tone, there’s an awful lot to love. The mixture of deep bass and clear – but not shrill – trebles delivers dreamy 1950s chords and arpeggios, early rockabilly, Spaghetti Western, surf twang and much more.

Specific points of comparison aren’t always apparent, but there’s a fascinating blend of Fender offset, Rickenbacker and Dynasonic-loaded Gretsch reference points, along with a whole heap of pawnshop flavours, often reminiscent of the catalogue guitars that have found favour over the years with outsiders such as Link Wray and Dan Auerbach.

It’s almost certainly not the guitar for your average wedding-band gig – and as supplied, the whammy bar doesn’t always return to pitch quite as consistently as we’d like – but nevertheless, the Stellarosa could be an instrument that inspires you start a new project or write an album based entirely on the way it sounds and the doors it unlocks.

In a studio or home setting, time spent with the Stellarosa is a voyage of discovery and we can’t think of many other review guitars in recent years that have provided quite so much compositional inspiration. With the weak pound pushing the street prices of similarly retro US boutique models into the stratosphere, Fidelity’s pricing is competitive, too.