From the Original and Modern Collections comes a pair of new production Les Pauls that might just prove less is more. 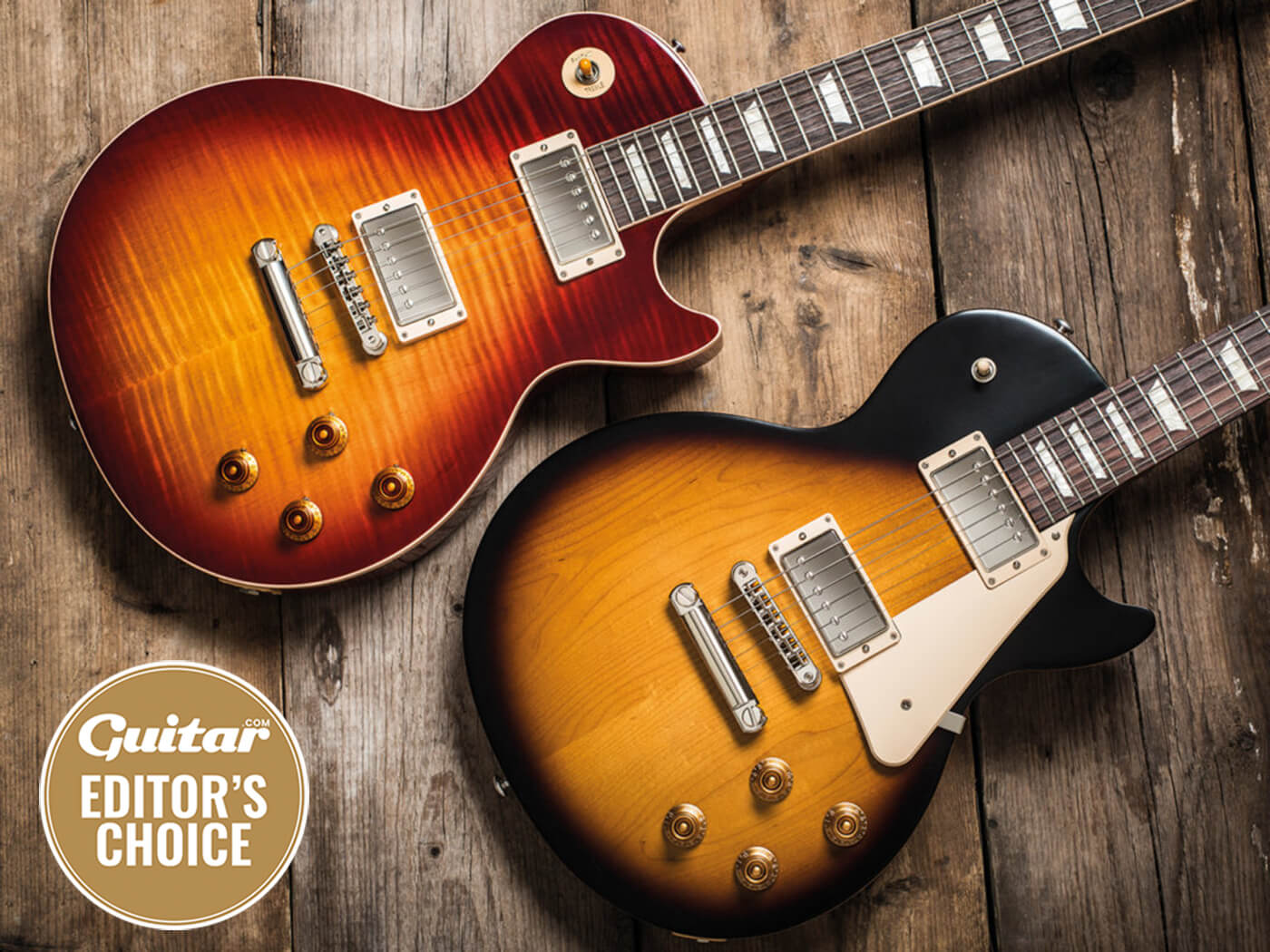 It all seemed like it was going rather well for Gibson. Rejuvenated under new ownership and with fresh investment, the goodwill generated by the company’s NAMM Show return in January was palpable. Led by former Levi’s main man JC Curleigh, Gibson seemed ready to move forward, focus on making great guitars again and exorcise the ghosts of the latter part of Henry Juszkiewicz’s troubled reign.

Then came June, that Mark Agnesi video, and a laundry list of news stories about trademark infringement, litigation, counter-claims, statements about “shifting from confrontation to collaboration,” and a lot more besides. And as we type this, a week or so prior to Summer NAMM, it looks like it’ll be some time before the dust settles. However, away from the lurid social-media posts and the sound of hundreds of lawyers rubbing their hands together with glee, there’s the small matter of some electric guitars to write about. After all, that’s what got us here in the first place.

In July, we featured Gibson Custom’s flagship 2019 model, the 60th Anniversary 1959 Les Paul Standard. Now it’s time to check out what the production-line Original and Modern Collections have to offer.

Back in April, we flew out to see Gibson in Nashville and witnessed first-hand the improvements that have already taken place under the watchful eye of new chief merchant officer Cesar Gueikian. Simple things – better lighting and extraction, more efficient workflows – have already had a positive effect on the factory floor and when we visited, there was a buzz of positivity about the place and a palpable excitement about the company’s new lines.

For 2019, Gibson’s electric-guitar output is split into the Original Collection, the Modern Collection and Gibson Custom. The Original and Modern Collection instruments are made at the company’s ‘Gibson USA’ plant on Massman Drive in the eastern part of the city, near the airport; the Custom division is situated just over a mile away on Elm Hill Pike.

During our visit, Cesar walked us through the Original Collection. “This is where we look back and pay tribute to our iconic past and bring those classic models back,” he explained. “It’s our way of celebrating our past, our legacy and our heritage. None of these guitars are chambered, they are all solid, just like we did them back in the 50s.”

We notice a few nods to the nerds, such as skinnier fingerboard binding on the Les Paul Standard ’50s and ’60s. “We went for thinner binding generally in everything we’re doing in the Original Collection, including the SGs,” reveals the CMO. “It’s closer to what the classic models were, it’s more authentic, it’s what we did back then. There was no science to what we were doing in the 50s, you see variations on original models – the thin binding is definitely more consistent in terms of what we did in the late 50s and so we’ve gone there.”

Specification changes aren’t just aesthetic: “Everything we’re doing in the Original Collection is hand-wired with Orange Drop capacitors. We particularly focused on the audio taper, to not bring output down when it cleans up the sound.”

With weight relief off the table for the Original Collection instruments, we wonder if sourcing lightweight mahogany for the range has been a challenge. Cesar says no: “We have a long term, steady source of mahogany. A couple of years ago, we did a deal with the government of Fiji, so we’re in a really good position today, as we have several years of what I would consider to be lightweight mahogany.”

If the Original Collection is about delivering instruments that don’t force innovation down people’s throats, the Modern Collection gives Gibson licence to experiment. However, alongside more tricked-out models such as the Les Paul Modern, you’ll also find the most accessibly priced LPs in the new catalogue.

Upgraded from the recent Les Paul Studio Tribute, the new Les Paul Tribute model features crowns rather than dots and covered rather than uncovered humbuckers, while you also get the chunkier strap buttons that Gibson has used extensively of late. The mahogany body is also weight relieved.

The exposed edges of the plain maple top create a faux-bound effect that complements the golden-brown tone of the maple neck, while the Satin Tobacco Burst is joined in the range by three other satin options that ape the various stages of Burst fade: Iced Tea, Honeyburst and Cherry Sunburst.

Turning our attention to the Standard – which has much in common with the previous Traditional model – there’s a hard brown case this time, rather than a deluxe gigbag, with a handle that’s considerably more comfortable than they were in the 1950s, with more reliable clasps and plush red lining.

When it comes to the guitar inside, you get gloss lacquer, real binding and a striking figured top instead of the Tribute’s plain grain. Strap buttons revert to daintier, vintage-style units, but it’s not exactly a tough mod if you prefer something more secure.

With no weight relief and a one-piece mahogany back, it’s a heavier guitar, but certainly not excessively so, and at a shade under 9lb, it’s lighter than many 50s instruments and balances well, whether seated or standing.

The rosewood ’board is a darker and more attractive slab than the Tribute’s lighter, purple-streaked ’board. The neck is a short-tenon quartersawn mahogany affair, while the revised fingerboard binding – still with a slightly tangerine hue, but slimmed down dramatically for more of a 1950s appearance – means that the nibs are smaller and less intrusive for players with a wide vibrato.

The Standard’s figured top impresses at this price point, with the centre-joined flame maple shimmering under lights and much like an old LP, it can look almost plain from some angles and erupt from others.

In order to show off as much of that flame as possible, our review model comes without its pickguard fitted, but it ships with one in the case should you prefer the ‘guard on’ look. If drilling holes in a pristine new instrument is intimidating, then we’d recommend asking if the scratchplate can be fitted at the point of sale. It’s somewhat easier to fit the Tribute model’s absent ‘poker chip’ pickup-selector surround, which also ships in the case.

Although both of our review guitars have shipped without their screw-coil polepiece heights being optimised and have slightly sharp edges at the nut, the basics are otherwise all present and correct. The frets have been installed neatly and the ends are nicely rounded on the Tribute’s unbound fingerboard, while the thin satin lacquer on the back of the neck provides a very smooth ride. Every Gibson USA model’s frets are levelled and dressed by a Plek machine and even when we test the Plek machine’s capabilities with some extreme bends in high registers, there’s no choking or fretting out to be found.

The Tribute’s rounded C profile is slim but hugely playable and doesn’t paint you into any stylistic corners. The maple neck and ‘ultra modern’ weight relief translate into an airy and enthusiastic performance that’s really appealing and although it lacks some of the midrange power of a solid-body, mahogany neck Lester, there’s plenty of sustain. Many people will prefer its breezier sound, especially in an era where cleaner and more textural tones predominate.

The 490R and 490T aren’t the pickups most loved by Les Paul aficionados, but the alnico II units certainly sound good in this context. It’s simply a well put-together, fuss-free instrument that does exactly what it’s supposed to and can cover a lot of ground.

Moving on to the Standard, the out of the box setup is again very good indeed. It’s dreamily playable, and unlike many original Bursts and slavish reissues, you don’t have to flip the G saddle around to get it to intonate correctly. We love the neck – Gibson has resisted the temptation to go for a huge mid-50s profile and instead, this beautifully rounded carve has a medium-depth more akin to a ’59.

Comparing the two neck carves is interesting, because it illustrates that dimensions only tell part of the story. Even though the Tribute fattens out a little more at the 12th fret, it feels sleeker overall, while the ’50s model feels fuller because of its more even, gradual taper as you head up to the octave marker.

Does double the price mean double the tone? The reality is it never does, but the Standard’s Burstbucker tones do feel a little more complex in the midrange, with more sophistication and depth overall. While it isn’t as vintage-authentic as an R9 loaded with unpotted pickups wired 50s-style, there’s still more subtlety here than some of the production-line Standards of the last couple of decades.

Neither instrument has too thick or syrupy a neck pickup and there’s much more versatility across the board as a result – especially in the often-overlooked middle setting, where experimenting with your controls delivers a wide range of sounds. We’ve said it before, but try knocking back the neck volume to about 8.5 with the pickup selector in the middle position – it’s such an expressive voice for lead work and you don’t have to pile on the gain to get plenty of sustain and harmonic content to work with.

Although traditionalists might bristle at the Tribute model’s cost-saving specifications such as weight relief, a 5mm shallower body and PCB-mounted controls, we strongly recommend playing one and making up your own mind – this is a toneful, lightweight Les Paul that’s less stressful to throw on for a rehearsal or pub gig than its more luxurious sibling.

Both guitars have bridge pickups that are a touch brash when you dig in and there’s room for further improvement, but on balance, there’s an appealing simplicity here which, if not quite a revolution, feels like a step in the right direction – especially when you consider that the pricing is now more competitive, too.