Gibson and the world’s leading top hat wearing rocker team up anew for a collection of electric and acoustic signature models. 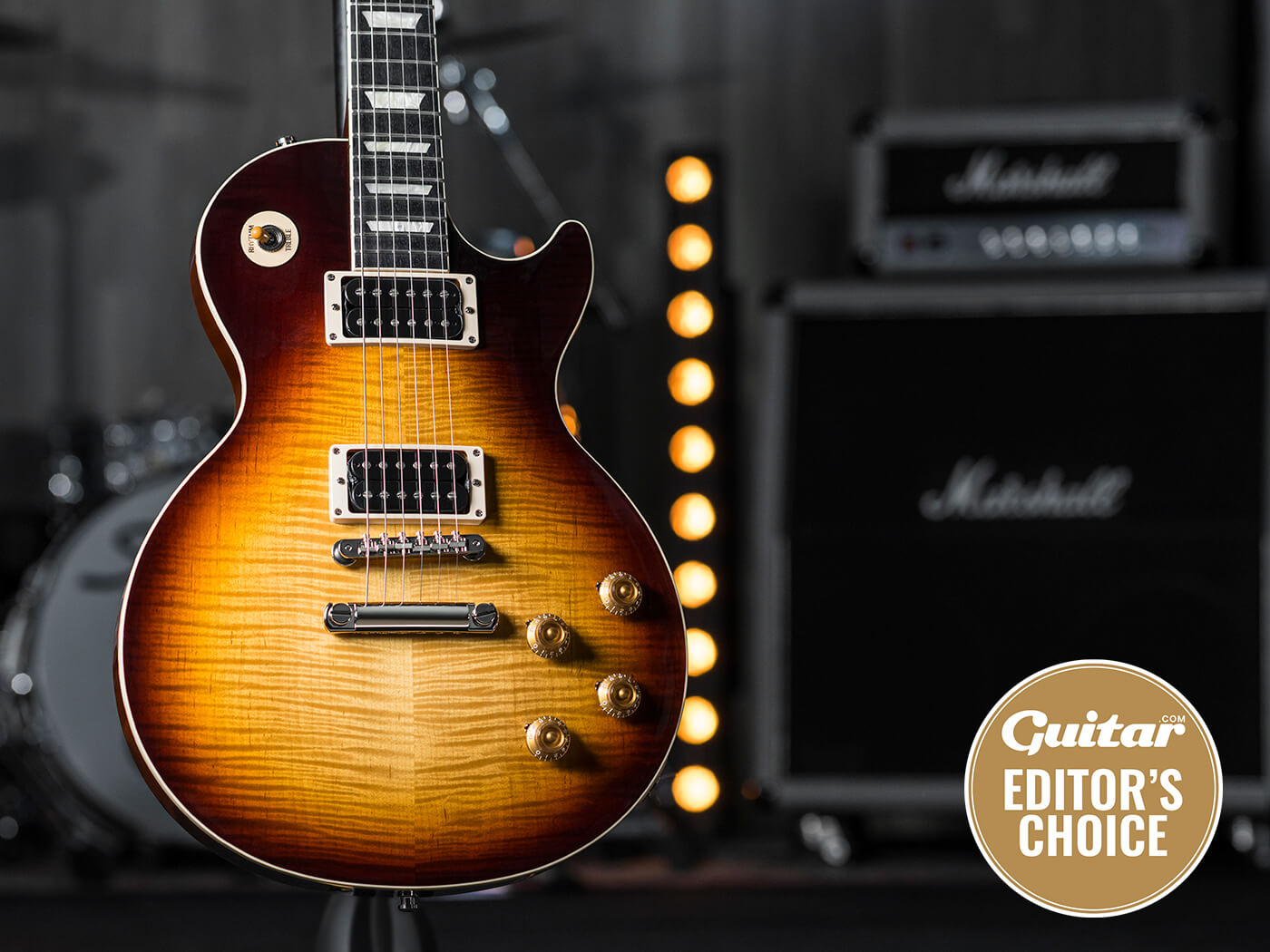 Picture this. It’s a grey morning on the last Friday 13th of 2019 and we have been invited to the sumptuous Gibson Guitars HQ in central London to review not just a new model, but a whole signature collection of guitars created by Gibson for one of its longest standing and highest profile artists, the mighty Slash himself.

Upon arrival we are welcomed into the Made 2 Measure lounge – the guitar equivalent of a Savile Row tailor’s fitting room. Here, the Gibson London team fosters a convivial environment where the well-heeled client can specify the exact stripe of maple, shade of burst and carve of neck on a bespoke instrument. It is an oasis of calm for even the most jaded of six-stringers and, arrayed for our attention, we find the entire Slash Collection, comprising four Les Paul Standard electrics and two J-45 electro-acoustics.

The contrast between the genteel surroundings and the obvious rock ‘n’ roll leanings of this collection is most apparent in the array of nitrocellulose finish options available. While Appetite Burst and November Burst are lovingly blended takes on a faded lemon and a dark-edged tobacco burst respectively, Vermillion Burst (a rich crimson) and Anaconda Burst (an inescapable shade of green) may not be immediately obvious choices for the average Les Paul fan. The coverless humbucking pickups and Slash’s ‘Skully’ logo on the truss-rod cover (a plain one is also included in the case should you wish) serve to emphasise the fact that these are instruments created with the expressed intention of rocking out at a very senior level.

Even the J-45’s – for decades Gibson’s venerable acoustic workhorse- have a streetfighter feel to them with their brooding ’burst finishes (November and Vermillion only in this case), Grover machine heads and visibly meaty necks. This is the first time Gibson and Slash have worked together on an acoustic instrument and the fact that the man himself has been putting the prototypes and first production models through their paces on stages around the world certainly bodes well. 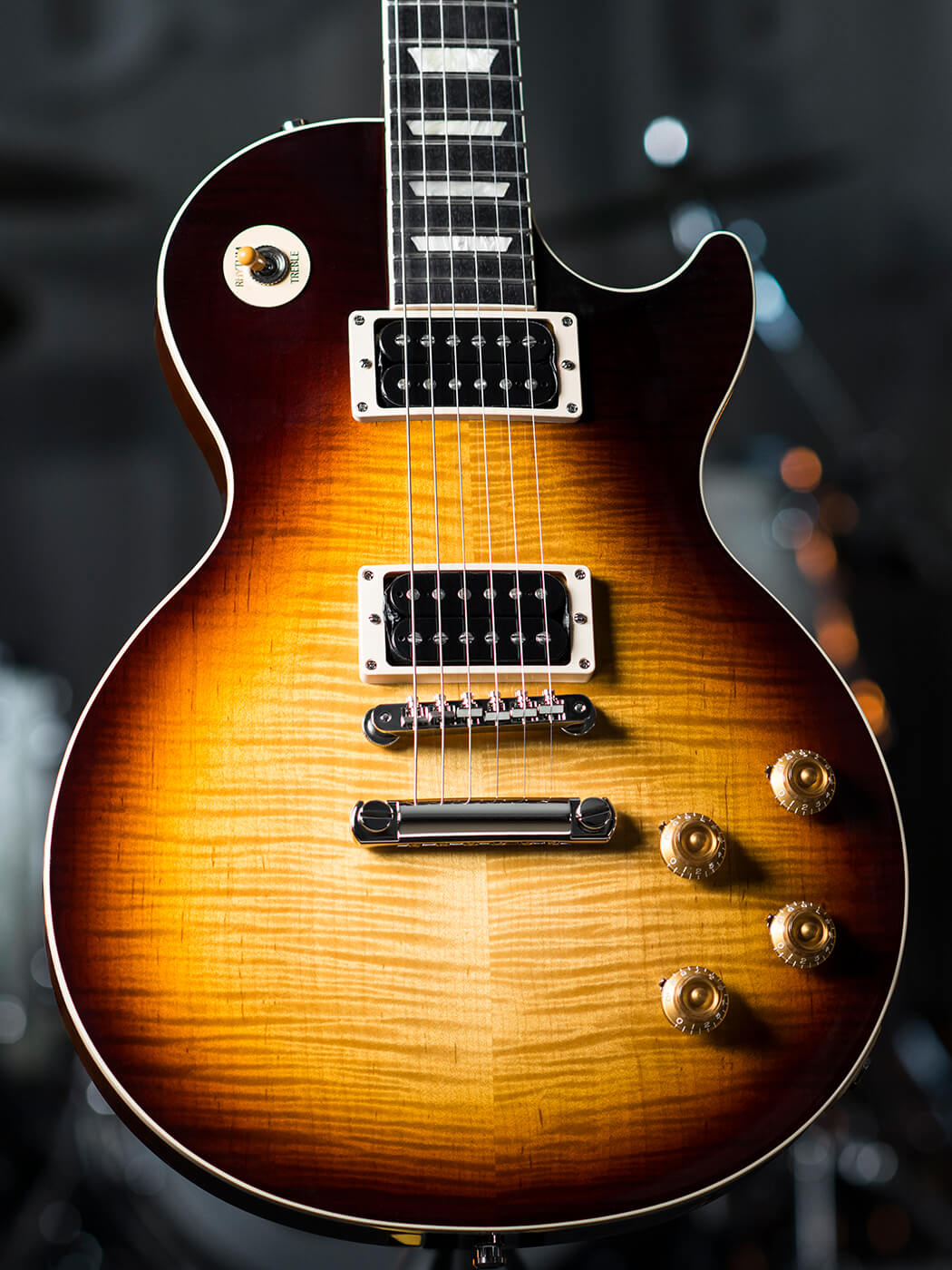 The Les Paul can be a tricky guitar. Though its the holy grail for many players, the design has several inherent quirks that can make for a challenging playing experience. The concentrated weight in such a small body, string break angle over the nut and slightly ungainly top fret access can mean it’s a less than easy squeeze, especially for the seated player. Of course, the more you attempt to “correct” these issues with chambered, weight-relieved bodies, sculpted neck-joins – a process rather like fitting tank treads to a Jaguar E-Type to improve its off-road performance – the less of the guitar’s true character remains.

As might be expected, Slash and Gibson’s approach here is a laudable “Suck it up, Buttercup”. This is a true Les Paul, heavy, with no effete concessions to ergonomics or lumbar issues. With a wide leather strap, the Les Paul comes into its own, and with ours set somewhat higher than Slash’s knee-level approach, the weight of the guitar is distributed evenly across the player’s body and the instrument’s balance point effortlessly brings the neck up to a natural playing position for the fretting hand.

And what a neck it is – based on a robust vintage 50s ‘C’ carve, it fills the hand beautifully and feels fast and immediate along its length. Slash’s hand-drawn Skully logo is revisited in silkscreened gold on the rear of the headstock of all these instruments as a reminder of its provenance. If you’ve read this far, that may not even be a deal-breaker for you. 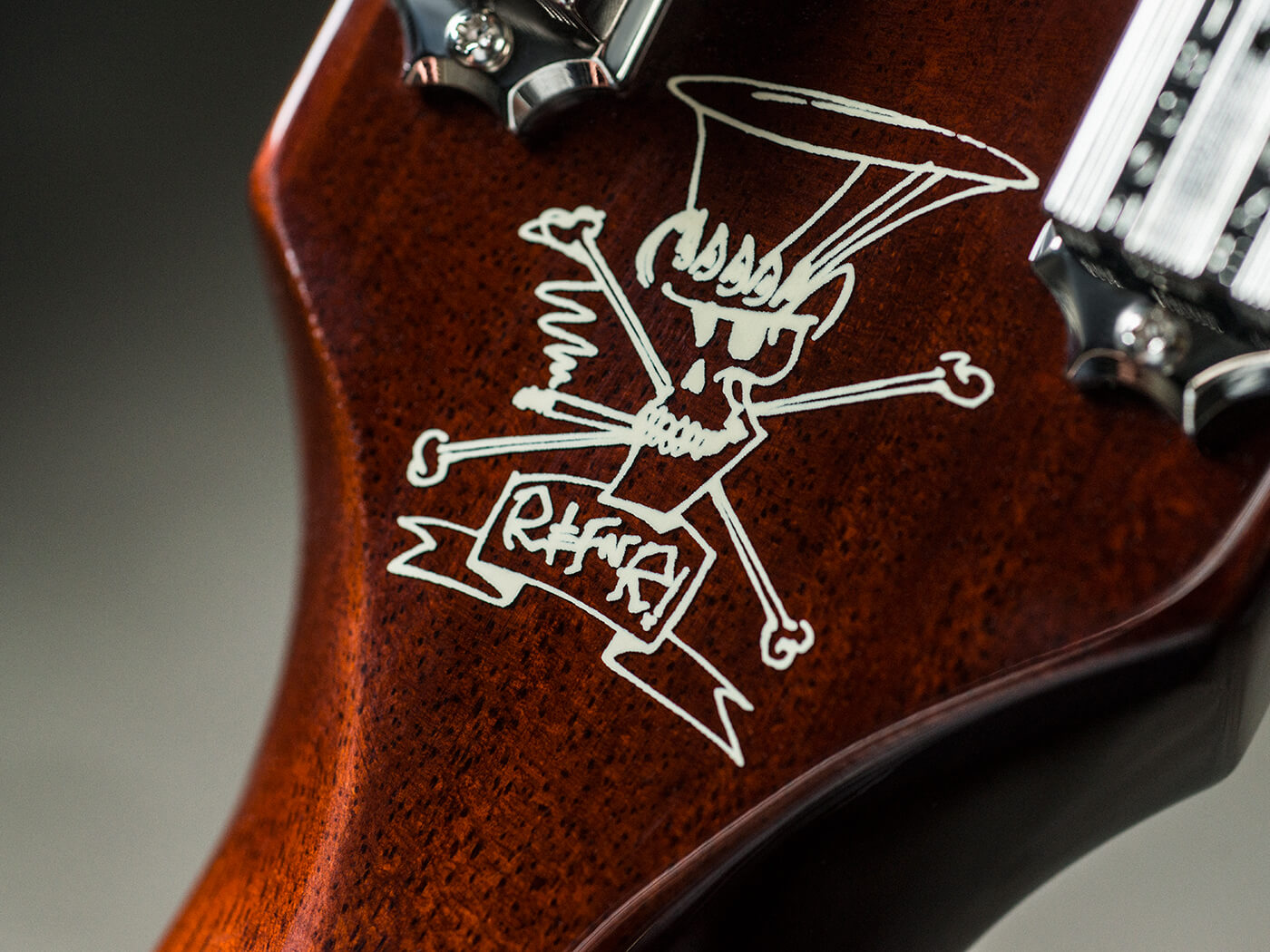 The bound Indian rosewood fingerboard looks and feels excellent. In darker times in Gibson’s history this area was often an Achilles heel in terms of production consistency, but the fretwork, binding and finish here is executed to a very high standard, as is the cream body binding.

Not for Slash the more demure figuring seen on some Les Pauls – instead the carved cap adorning the Slash Collection Les Paul Standard is AAA grade flame maple, well book-matched and resplendent under the nitro finish. 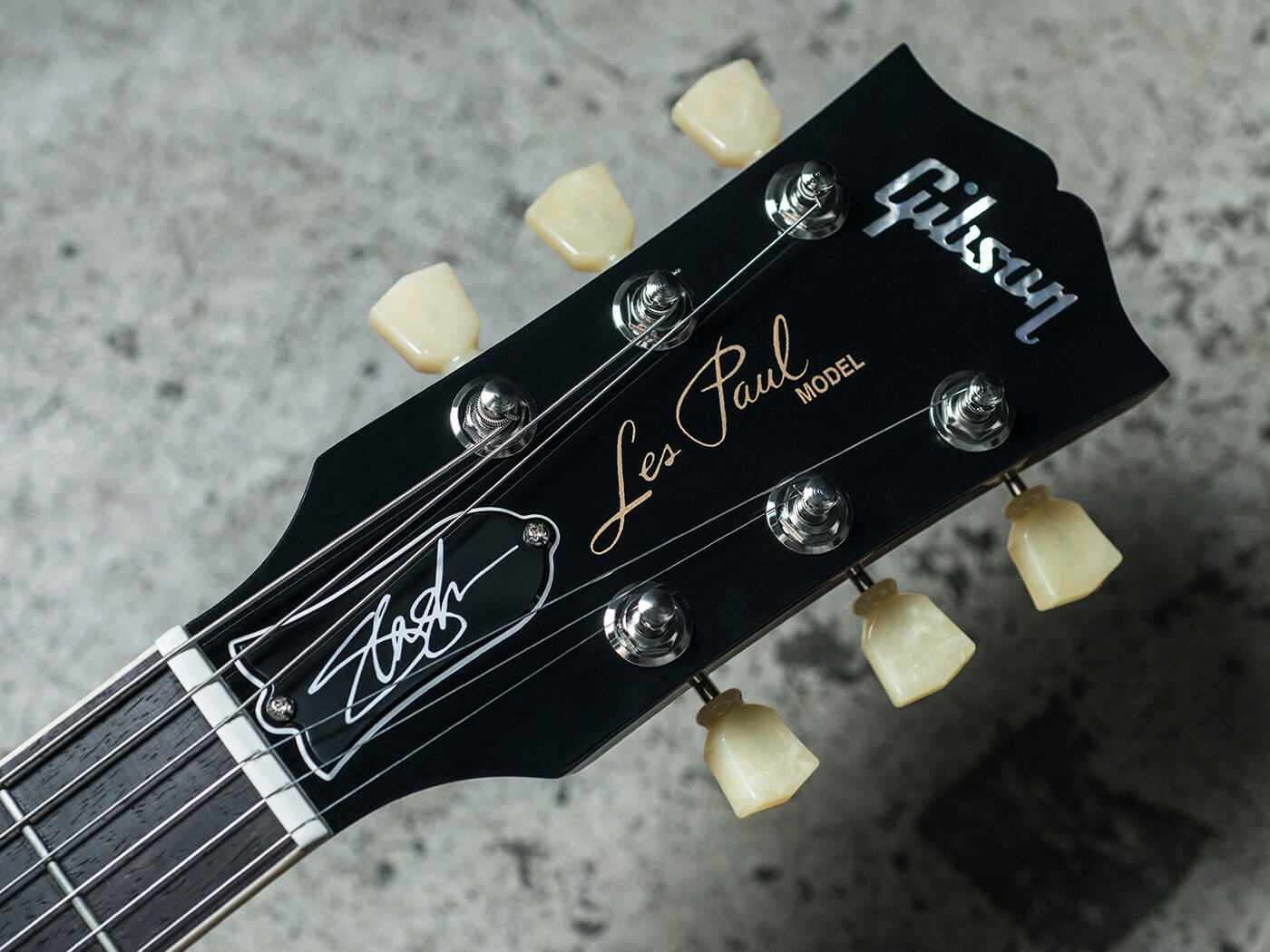 Gibson’s downstairs artist space provides everything you could need to fully evaluate a guitar bearing Slash’s name including a raised stage, full lighting rig and a Marshall Silver Jubilee half stack. With the volume and gain dimed and exchanging slightly manic grins, we plug in – basking in the smooth scream of harmonic feedback as the guitar and amp do what they were made for.

There was a time, before amp modelling and in-ear monitors, when dinosaurs stalked the earth and if you didn’t have to reach over your head to adjust the controls, your amp was too small. For a moment we are transported back to that golden era of rock guitar with the visceral, trouser-flapping fury of a Les Paul through a molten tube amp. And it is glorious.

The pickups are custom Slashbuckers (natch) and while their default voice veers towards the aggressive side, it takes very little effort to pull out convincing Peter Green and early Clapton tones from the guitar. The neck humbucker is warm and jazzy with the volume rolled back and exhibits some of the detail and cut of an original Burst

The middle setting is particularly beautiful for clean picked rhythm lines with a Dave Navarro kind of feel, and the bridge humbucker takes us back from leather kilt to leather trousers with a primal grunt that encourages palm-muted chugging and pentatonic histrionics in equal measure. The fingerboard is precise and grippy, perfect for the long, expressive bends and slow vibrato characteristic of Slash’s playing, and the guitar has all the sustain you’d expect.

Everything ‘wrong’ with the Les Paul design remains as wonderfully wrong as it ever was with this instrument. Everything right with it has been fine-tuned to offer an exhilarating rock guitar experience. Even if your passion for Slash himself runs towards the tepid side, this is a very good LP indeed. 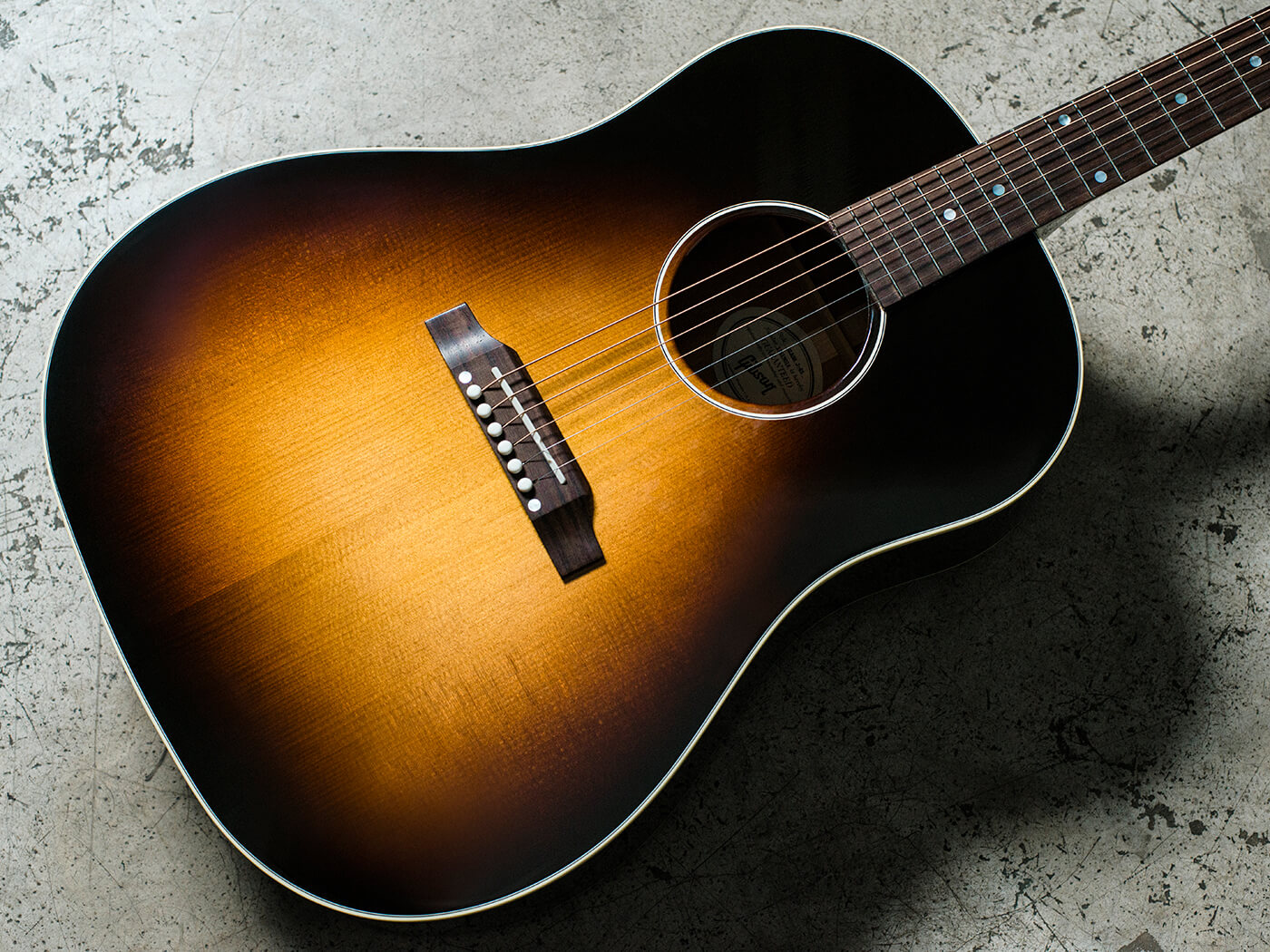 Gibson’s iconic J-45 design has been a stalwart of the company’s acoustic range since 1942 and while it has undergone several revisions since then, this is arguably the first instance of a J-45 built explicitly with the aim of serving precious metal balladry to adoring audiences at stadium volumes.

With these tender ends in mind, Gibson has employed a scalloped X-braced Sitka spruce soundboard over genuine mahogany back and sides, active LR Baggs electronics and a deep C-carved mahogany neck. The body is bound fore and aft in cream plastic, with no heel cap, while the dark rosewood fretboard is left bare, save for mother-of-pearl dot position markers.

Light weight despite the active pickup system, the J-45 feels comfortable both seated and standing and simply handling the instrument reveals a lively soundboard with a big sweet spot behind the bridge. The Grover tuners, a popular retro-fit amongst J-45 owners with more rigorous tuning standards, do their job and the well-cut nut makes smooth work of fine adjustments. 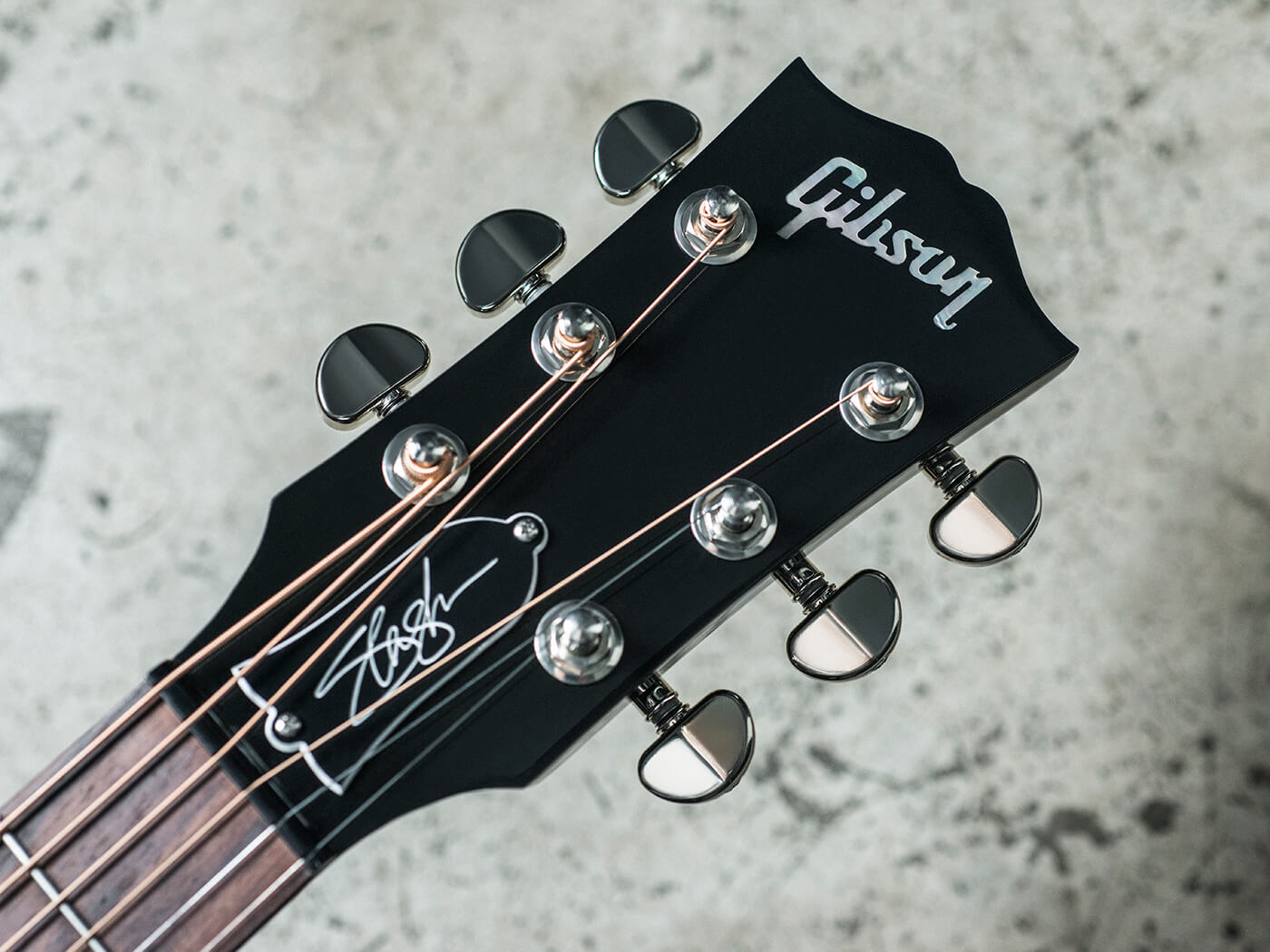 The first thing we notice about the Slash J-45 is how well the chunky neck translates into open position chord playing. There is a school of thought amongst acoustic guitar luthiers that a stiffer, more massive neck prevents energy being wasted along its length. In this case there is certainly a lot of power coming from the soundboard, especially when you dig in with a pick.

Fingerpicked, it’s a less convincing story but this is not a subtle, delicate acoustic voice nor do we believe that was Gibson’s intention with this guitar. Instead we are confronted with a muscular, chugging rhythm machine with the clear, fundamental range typical of a mahogany slope shoulder dread smoothed off by the scalloped X-bracing of the Sitka top. There is more than enough power here to fill a room unplugged, and the professional pickup system delivers convincing, stage-ready performance within a mix. 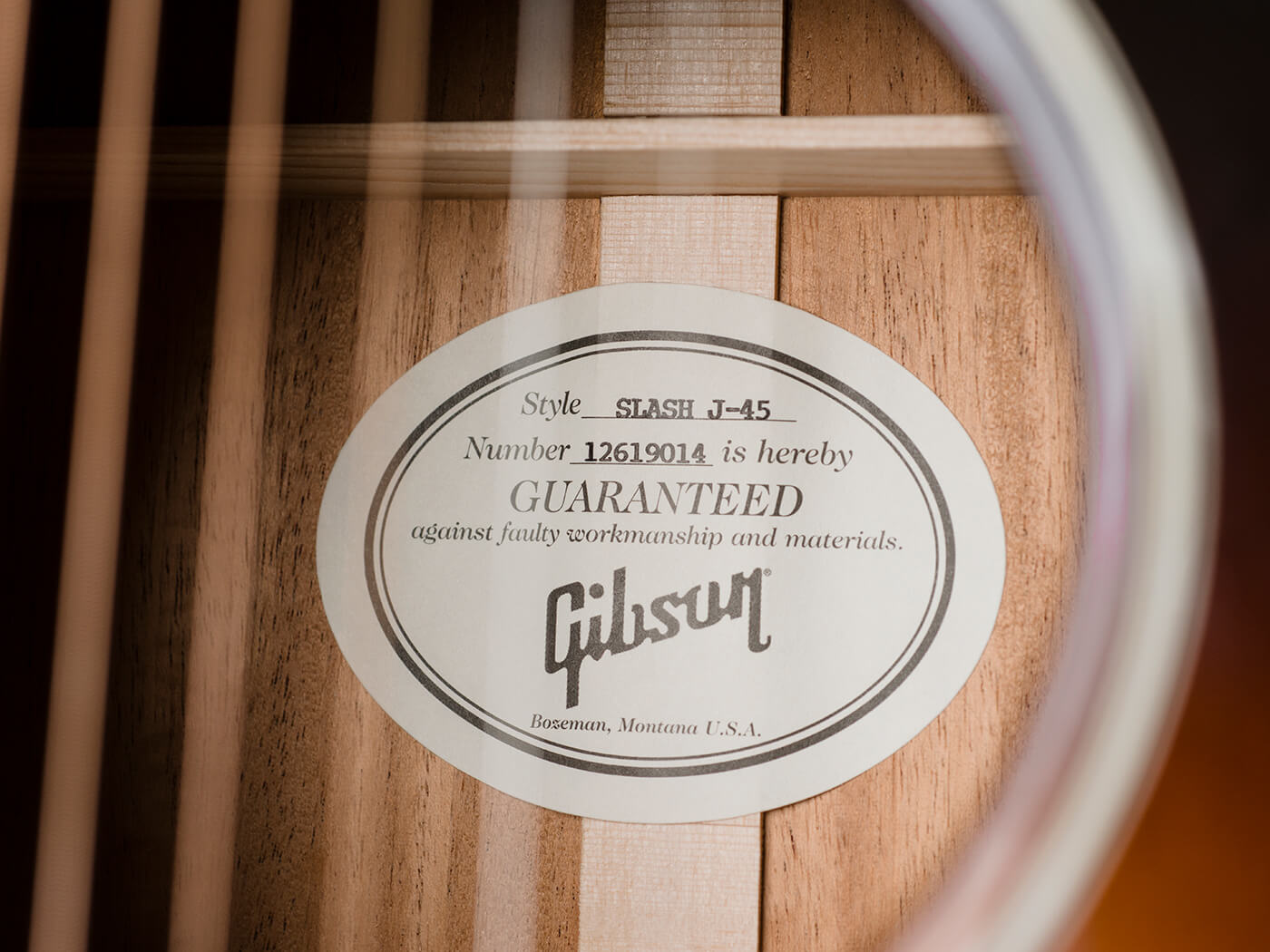 While Slash has pressed double-neck and 12-string acoustic guitars by Guild into service over the years, the more time we spend with the J-45 Standard model, the more we feel that it just makes sense for him. It’s brash and in your face but at the same time retains a lot of the feel and character of a vintage Gibson acoustic.

Even for a company that was founded well over a hundred years ago, Gibson has had a colourful, sometimes glorious and sometimes chequered past. The same could be said of Slash himself and it’s true that some player/guitar maker relationships just work, no matter what.

The stated aim of the Nashville company’s new leadership is to strip away the distractions and concentrate on what has made the Gibson such an integral part of music history since 1902. It could be argued that the most effective way to do that would be to draw on that same heritage to make the very best instruments possible and in the Slash Collection it has created a line of unapologetically rowdy, extremely characterful guitars that do their intended job perfectly. What more could you wish for?