Steve Wariner and Brian Setzer know a thing or two about great Gretsch tone and are two of the company’s most high profile artists. Time to give their signature models a spin. 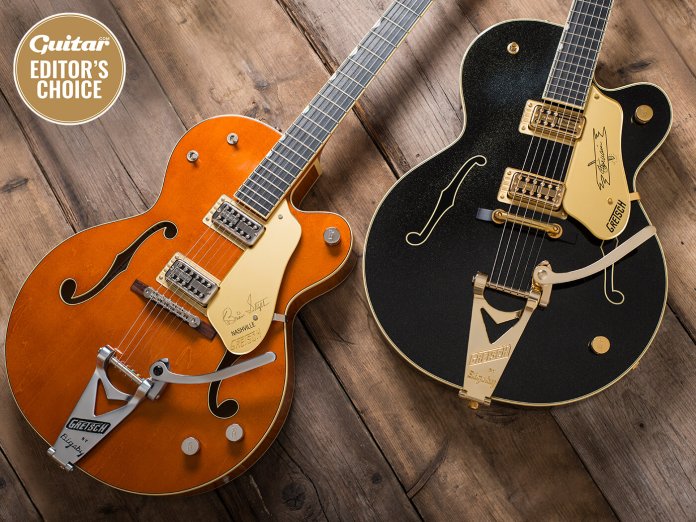 The iconic Gretsch 6120 and Nashville models are closely related. Most associate the 6120 with its single-cutaway incarnation. The last of these was made in 1961, and thereafter the 6120 became a slimmer double-cutaway with faux f-holes. This version was rebranded the ‘Chet Atkins Nashville’ and in 1966, acquired a fancy brass headstock plate. By then, the only features it shared with the 6120s of the 1950s were the Bigsby and orange lacquer.

In that context, both of these ‘Nashvilles’ are something of an anomaly and the Steve Wariner model actually harks back to something a decade earlier. With its Magic Black finish, gold plated hardware, deep 2.75-inch body and painted f-holes, it’s similar to the second 6120 that Gretsch made for Chet. He was first seen playing it in the late summer of 1956 and as well as being one of his personal favourites, it was also his preferred guitar for experimentation.

Steve Wariner is a Grand Ole Opry and Kentucky Music Hall of Fame member and one of only five guitar players ever to get a Certified Guitar Player award from Chet Atkins. No doubt he’s aware of Chet’s early 6120, but that doesn’t mean he wanted his signature Nashville Gentleman to be a straight copy. Instead, it sports an intriguing mixture of old and modern features. 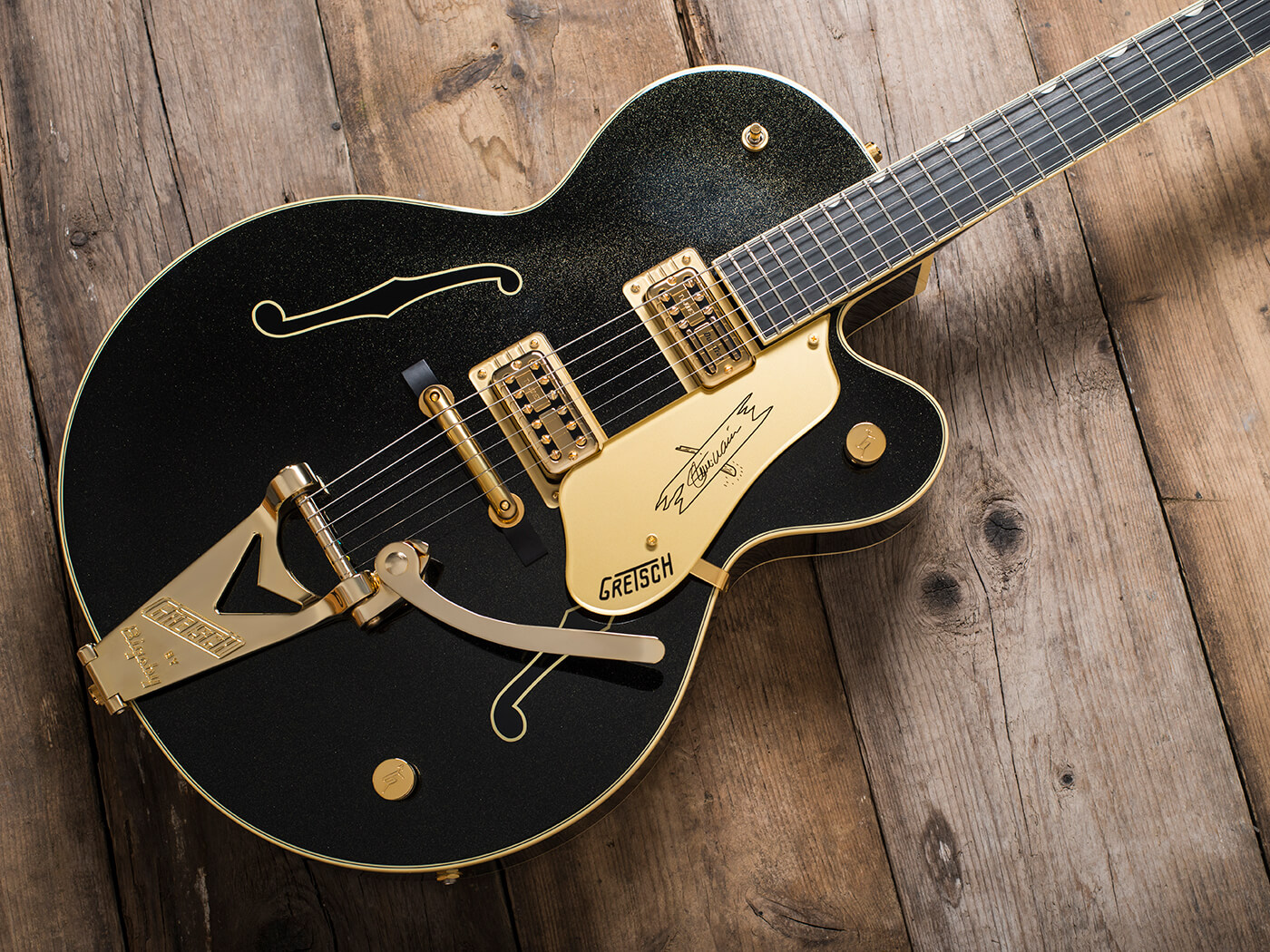 Like Chet, Wariner prefers a brass nut so fretted notes sound the same as open strings. Back in 1956, Chet’s black 6120 wouldn’t have had trestle bracing or a metallic finish, but this guitar has both. The finish is particularly impressive, with gold particles mixed in with the black to match the hardware.

Tim Harmon designed Tru-Arc bridges to match fingerboard radii – in this case 12-inches. As well as vastly improving playability, intonation accuracy benefits, too. Here it’s fitted on an ebony base that’s pinned to the top for stability.

Although Wariner has specified a stripped down ‘hot rod’ configuration with master volume and tone, the tone knob is also a push/pull switch for single-coil mode. That’s because Wariner loves Teles, too – and it’s also the reason his guitar has a 25.5-inch scale length.

Normally we feel apprehensive about low output humbuckers operating half cocked, but having a beefed-up TV Jones Classic Plus in the bridge and a Duo-Tron in the neck is more promising than regular Filter’Trons. For a busy pro, practicality is the name of the game and refinements include a String-Thru Bigsby and Gotoh locking tuners.

It’s a similar, although more familiar story with the Setzer model. Like many top players, Brian Setzer has been obliged to figure out how to make his vintage Gretsches viable and robust gigging guitars. Collectors usually prefer to keep guitars original, but if you want to use them for two hours every night on a six month tour, you’ll want them to play as nicely as possible and stay in tune. 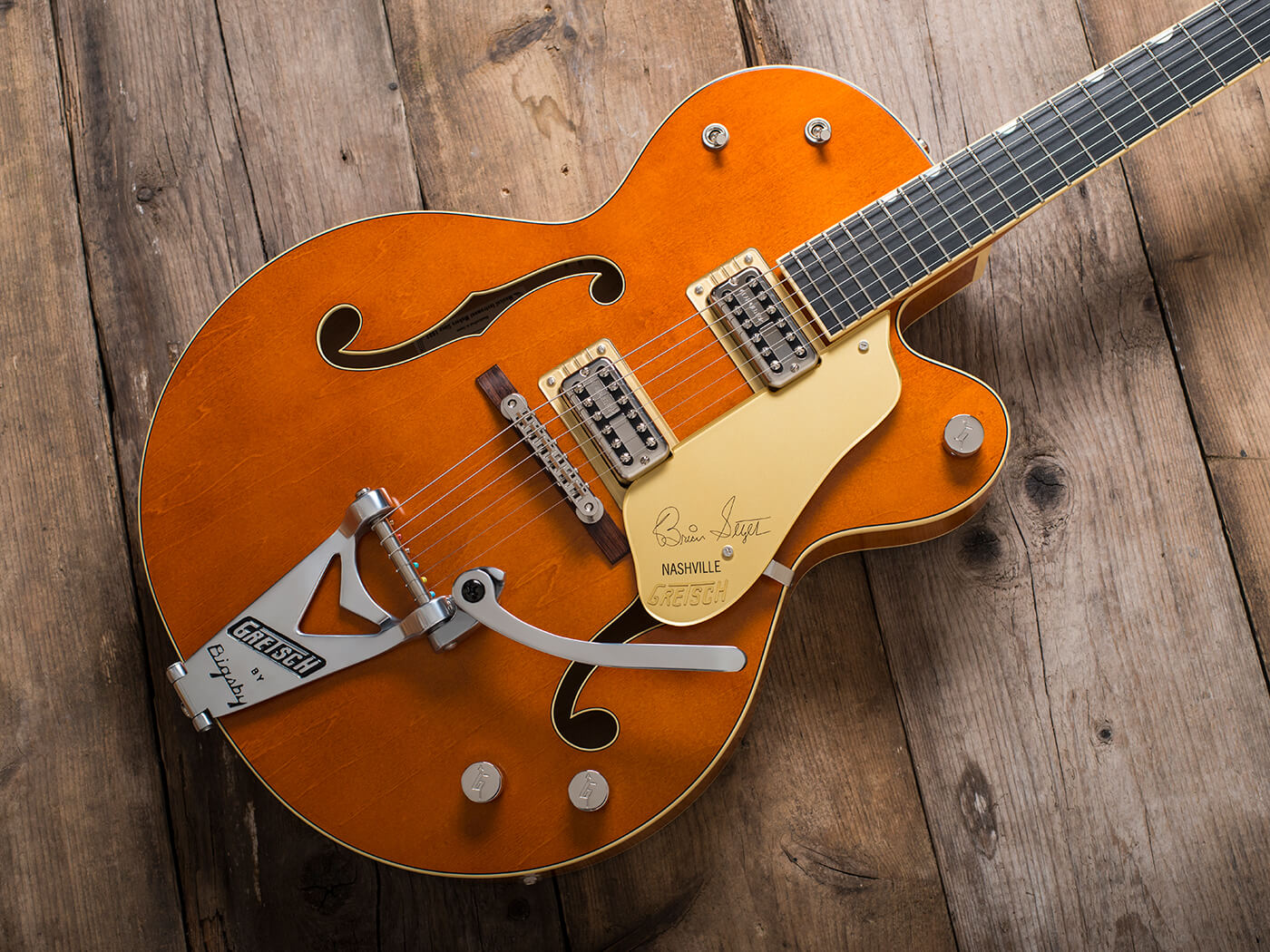 This guitar is based on a 1959 6120 that has been a stage and studio favourite of Setzer’s since the 90s and it features the refinements that Setzer and his techs have developed over the years. At first it was nicknamed Smokin’ because of its killer tone, but that eventually evolved into ‘Smoke’.

TV Jones has done a tonne of work on Smoke, and the bound ebony fingerboard is shaped to a compound radius – 9.5 to 12-inches. Medium-jumbo frets are also installed here, although not the stainless steel 6105 wire that Setzer uses.

Jones also re-veneered the headstock to conceal some ill-advised tuner swaps, and shifted it downwards to tidy up the area behind the nut because Setzer prefers a regular nut to the zero fret Gretsch used during 1959. Consequently, the logo is closer than usual to the tuners, and this guitar has the same look.

Setzer also favours a tune-o-matic bridge – here an Adjusto-Matic mounted on a pinned rosewood base – along with a regular V-cut Bigsby. The control layout is stock 6120 – complete with tone switch – but the pickups may surprise some. TV Jones’ Setzer Signature pickups were regarded as the most vintage-accurate Filter’Trons available – until Tom’s Ray Butts Ful-Fidelity units assumed that mantle. We’re very excited to try them here.

Vintage correct features include flamed maple rims and a dulled Smoke Orange finish that looks wonderful. There’s trestle bracing, too, and the body depth is 2.5-inches, but the tuners are locking Gotohs rather than the Sperzels more usually found on Setzer’s vintage Gretsches.

There’s little point in comparing the unplugged tones because the closed f-holes make the Wariner so much mellower and quieter, although both guitars display impressive natural resonance and sustain. The necks feel quite different, with the Wariner’s ‘Standard U’ being exactly as described and the Setzer’s ‘Vintage V’ being so subtle it’s barely noticeable. That said, it feels sublimely comfortable and uncannily like our own 1960 Anniversary/6120 conversion. 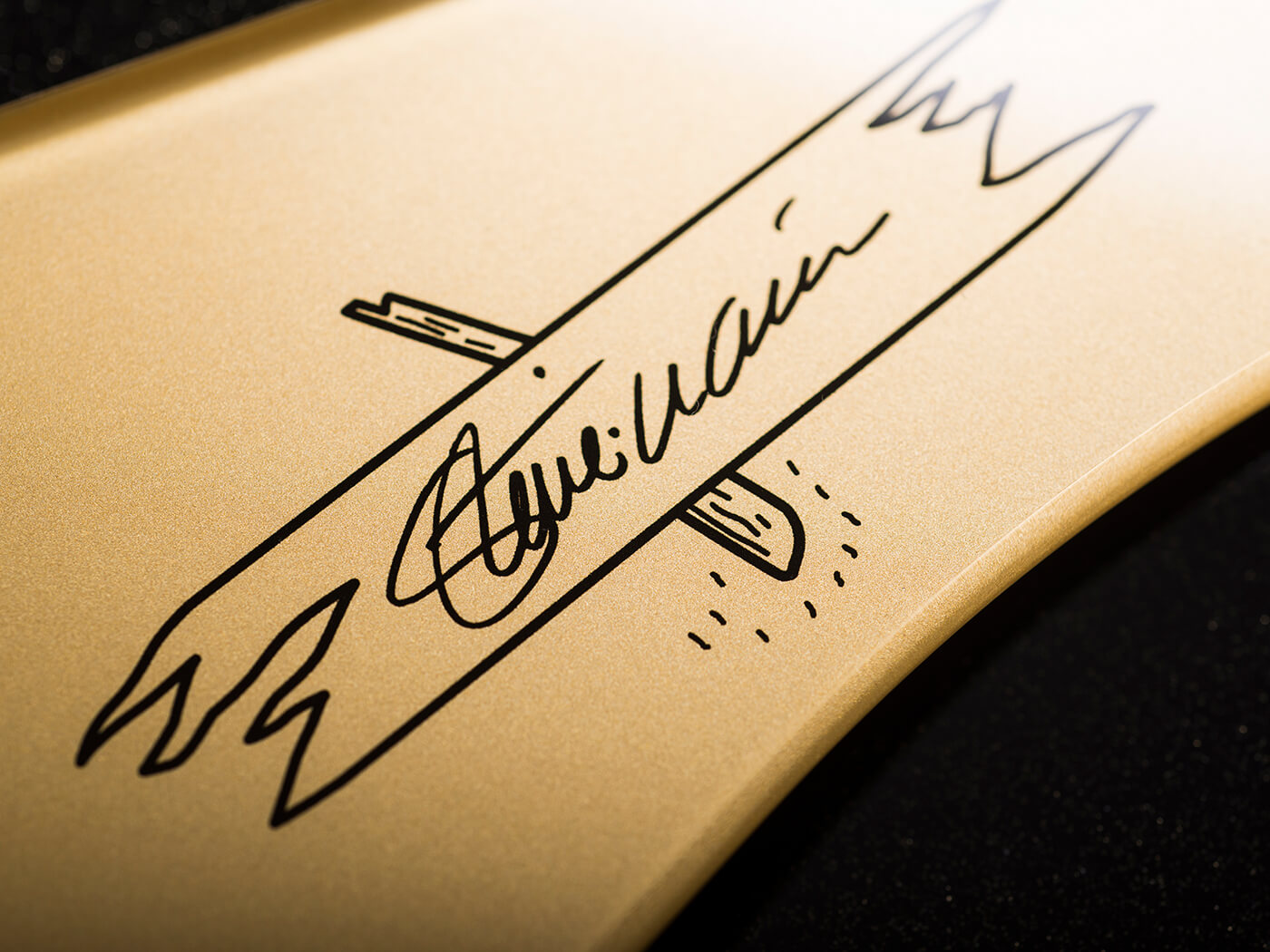 The Ray Butts Ful-Fidelity pickups have a distinctly vintage tone. The bridge is bright, quacky and has real bite. The neck is rounder and fuller, but steers well clear of muddiness. They sound a touch thinner and brighter than the vintage Filter’Trons in our Anniversary, but perhaps closer to the slightly squeaky twang and snarl we associate with Setzer’s tone. The Setzer model also sustains far more like a solidbody and we’re pleased that having made the much derided mud switch usable, Gretsch has stuck with it.

The Wariner’s TV Classic Plus is gutsier and fatter than the Ray Butts units. It retains a Filter’Tron type tone, but it’s more contemporary, aggressive and less niche. The Duo-Tron is something special because the blades give the plain strings extra heft and solidity. It’s remarkably well balanced and sounds powerful but not overblown. It also performs more convincingly in single-coil mode than the Classic Plus, but neither split-coil sound is much like a Telecaster.

The Wariner has amazing looks and greater versatility, and many will prefer the longer scale length. It could be a bit of a handful, but the Setzer is addictively playable and is among the best vintage inspired 6120 variants we have tried. Some might like it even more with a Tru-Arc and a set of Grover Sta-Tites, but we’re not complaining. 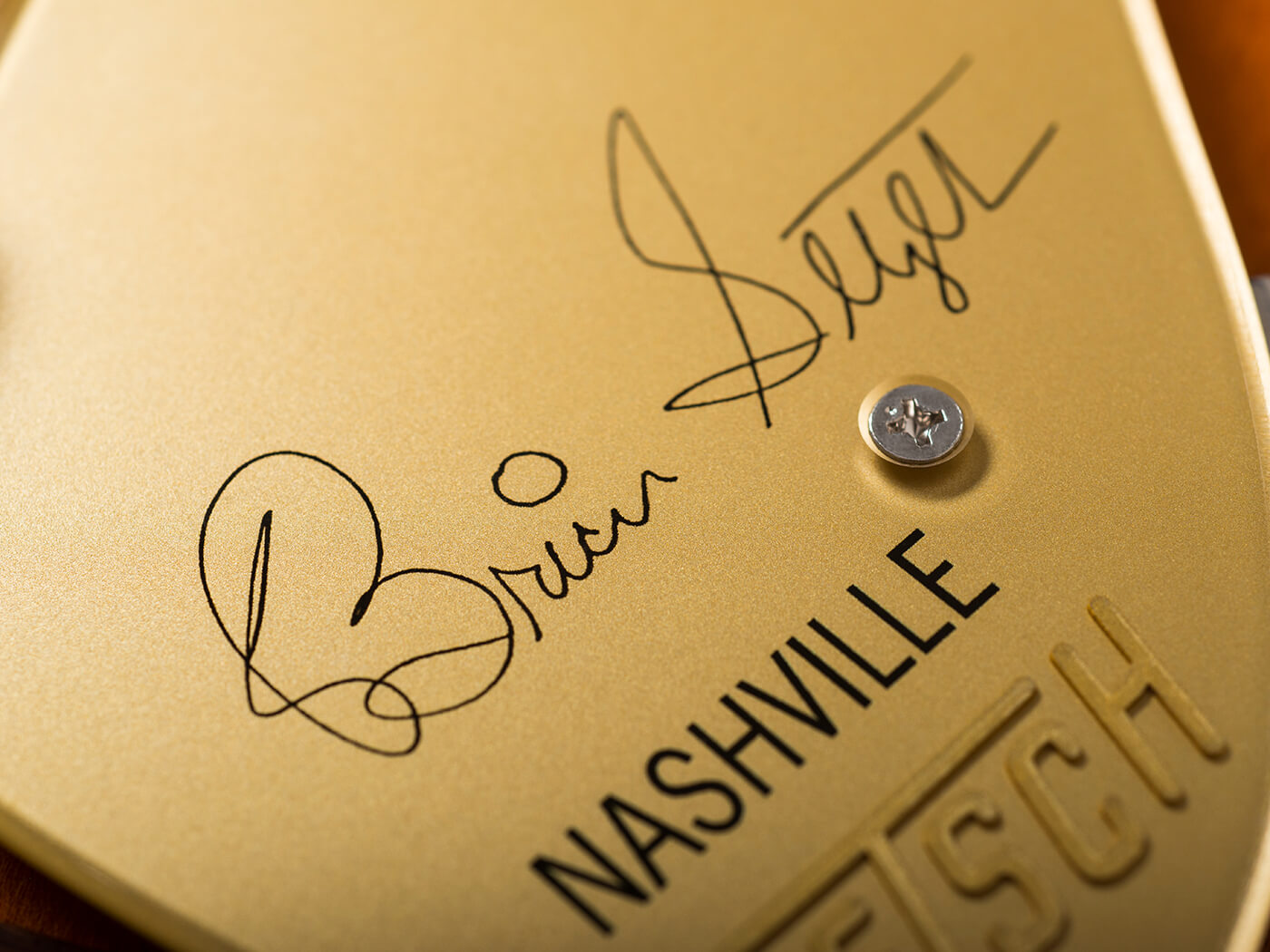