One of the coolest guitars of NAMM 2020 touches down in the UK. Hopefully we can stop looking at it for long enough to play the damn thing. 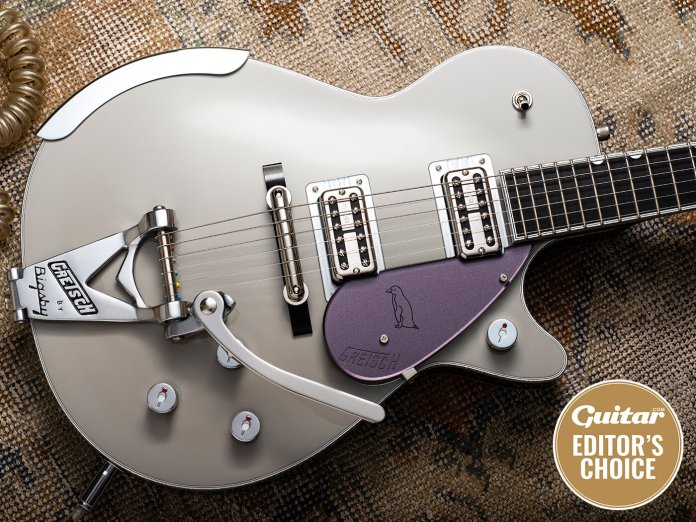 Gretsch guitars have always had more than enough cool to leave the competition in the dust, but at whichever end of the catalogue you dip into today, there’s a level of manufacturing consistency and player-friendliness unprecedented in the company’s 137-year history. Launched in January 2020, this limited edition model is the latest Gretsch to cherry-pick from the aesthetic highs of the past, combining sparkling Penguin chic with an Anniversary-style two-tone finish previously seen on the Country Club model a decade ago. Some guitars are built for speed – the G6134T-LTD is a Cadillac Eldorado.

Beneath a devastatingly attractive Smoke Grey and Violet Metallic gloss polyurethane finish is the chassis which, with its chambered mahogany back and laminated maple top, is very much a member of the Jet family – although the set neck is maple rather than the usual mahogany. Among the lashings of bling are silver-sparkle binding with four-ply white and black purfling, plus jewelled arrow knobs and a banjo-style armrest. 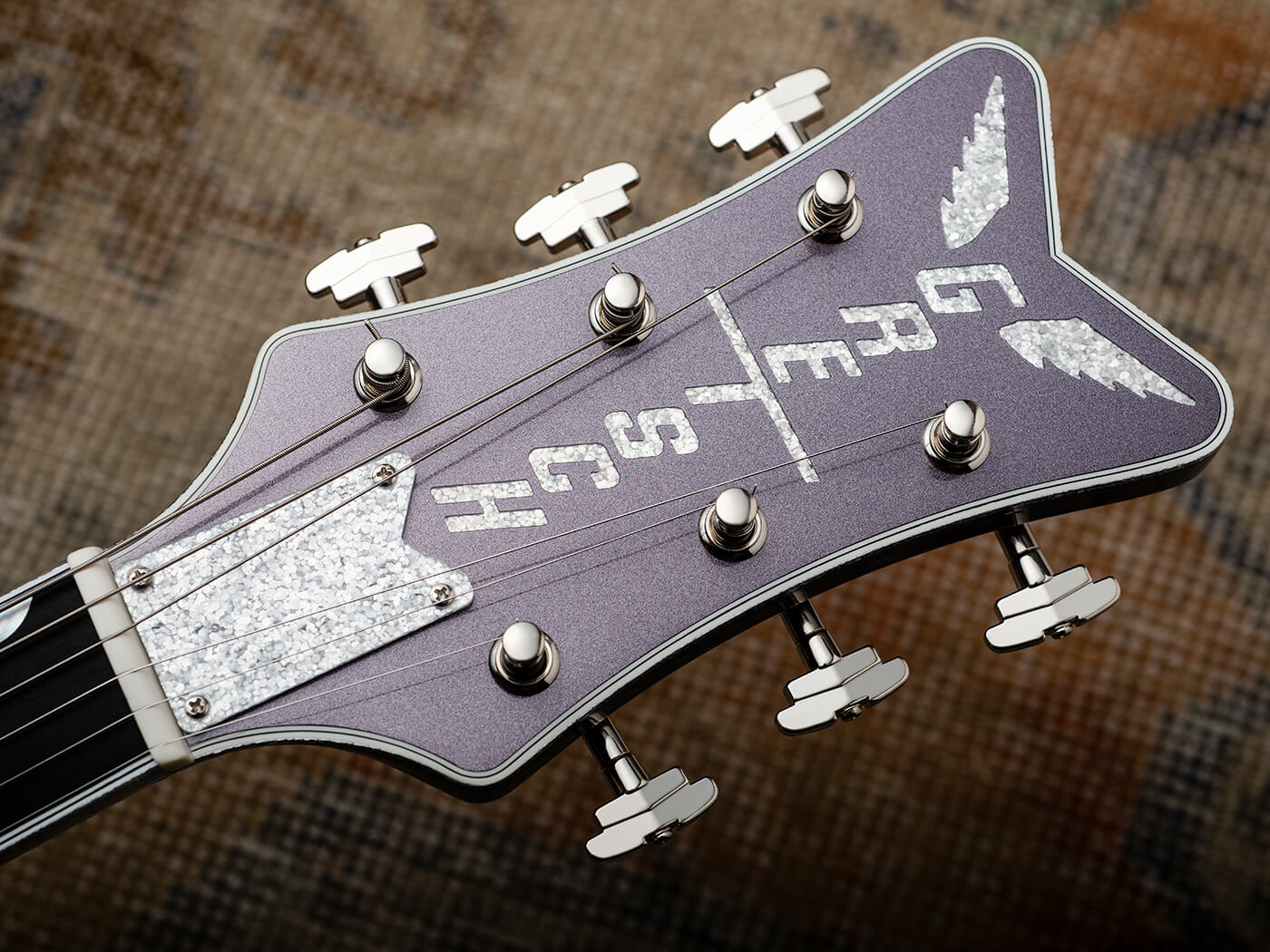 Then there’s that oversized headstock with its winged logo and Grover Imperial tuners – Violet Metallic it may be, but this is not an instrument for violets of the shrinking variety. That said, the nickel hardware is a much more tasteful choice than the Penguin’s traditional gold and we particularly like the understated ‘ghosted’ Gretsch logo, which appears to be cut into the Plexiglas pickguard from the rear before the metallic paint is applied. This Penguin is a heavy old beast – more of an emporer than a Humboldt, if you will – but it’s impossible not to feel like a million dollars with it hanging around your neck, and it balances superbly on a strap.

On close inspection the Terada factory’s finishing isn’t flawless but the execution is of a very high standard and several magnitudes cleaner and sharper than it was back in Brooklyn in the 1950s. Although the Penguin doesn’t come fitted with one of the new labour-saving String-Thru Bigsby tailpieces found on Gretsch’s Players Edition models, the combination of B3C and nickel-plated brass Rocking Bar is one of the most expressive and smooth in all of whammyville. In addition, the pinned ebony base ensures that a heavy right hand won’t send your bridge sliding across the top’s graceful arch while you’re mid-performance. 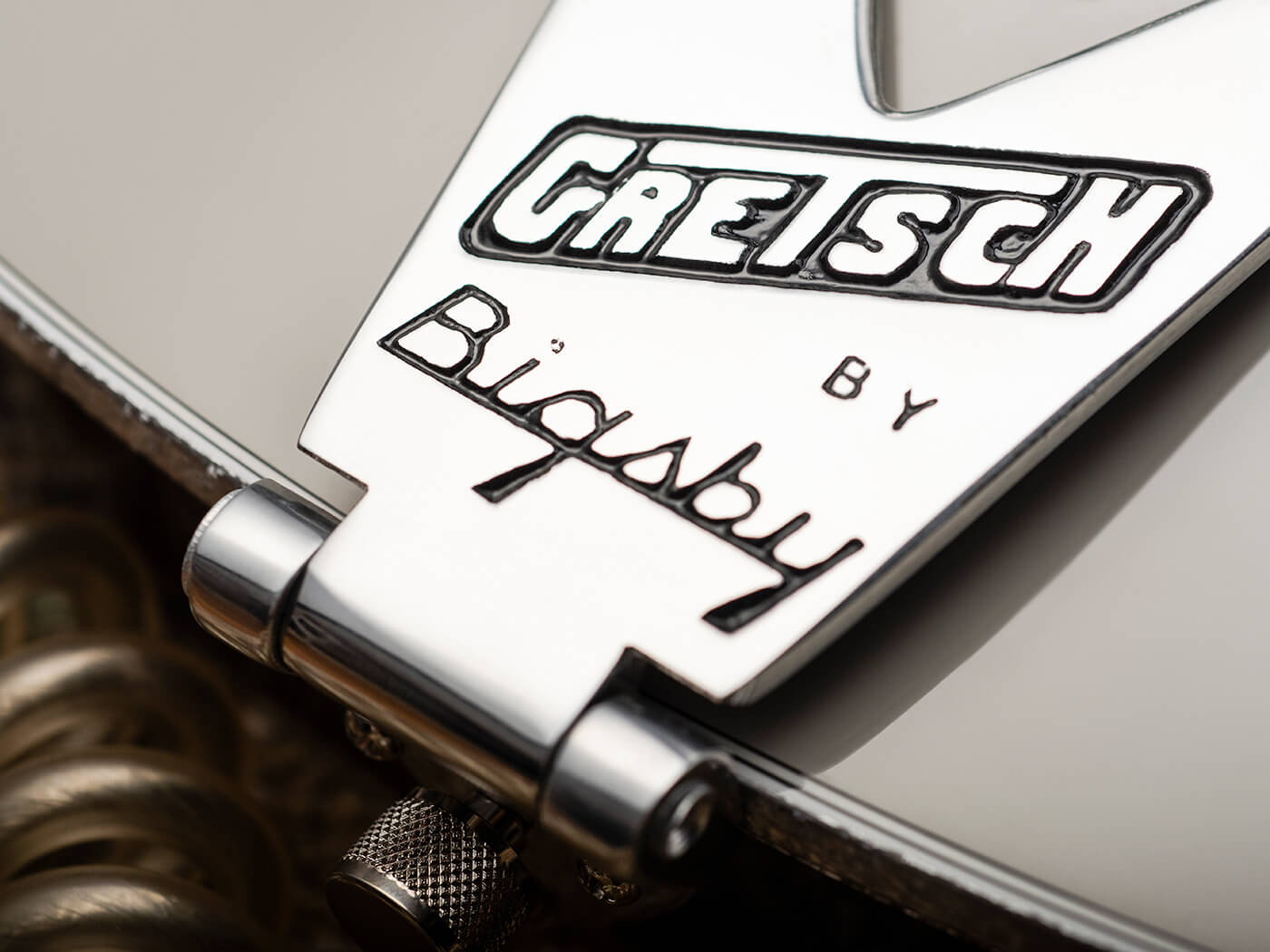 We’ve recently spent many hours engaged in remote recording sessions, and our G6137TCB Center-Block Panther has lived up to the last three initials of its model designation by taking care of business in impressive fashion. As you’ll soon discover in the Filter’Tron shootout that begins on p102, the Panther’s High-Sensitive pickups may not be the most vintage-authentic units out there but they have a satisfying raunch and perform very well indeed in a loud band mix.

Moving from Panther to Penguin in our guitar menagerie is interesting because the first thing you notice is the loss of lower-mid punch – the Penguin’s TV Classics having less of the aggression and immediacy that makes the Panther such a fabulous rock machine. The Penguin also offers a slightly shorter decay in high registers, but this has more to do with construction than electronics. 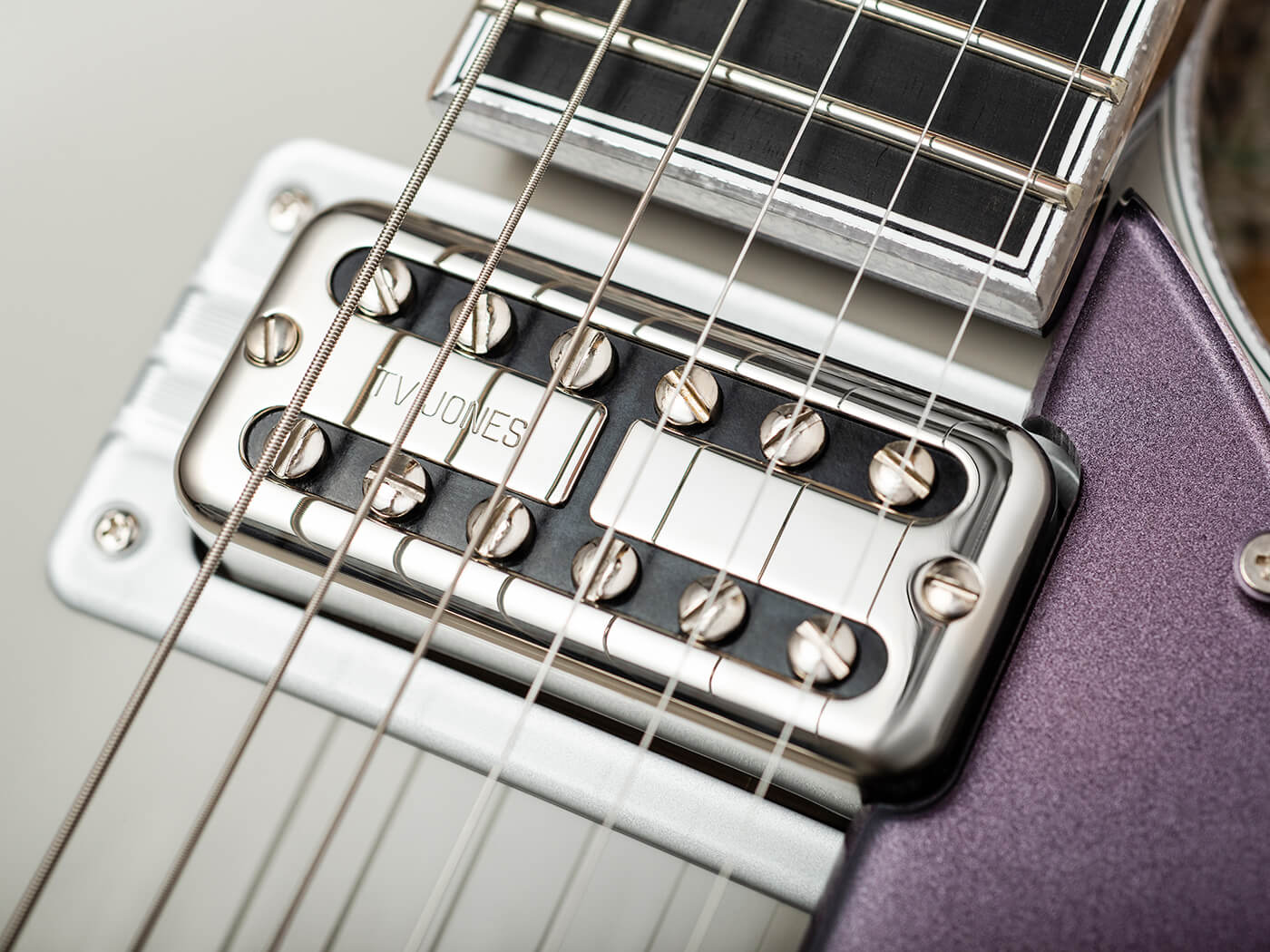 That said, it’s not long before the Penguin’s considerable charms reveal themselves. Instead of the Panther’s in-your-face snarl, what you get instead is a less congested midrange, greater articulation and a PAF-like treble extension providing an additional harmonic sheen. Much of this is down to the pickups but it’s highly likely that the Penguin’s no-load tone control (which effectively removes it from the signal path when running wide open), maple neck and ebony ’board are making their presence felt in the trebles too.

In all three pickup positions, the Penguin feels closer to a vintage Gretsch than the Panther does. As ever, the individual volume controls allow for some interesting blends in the middle position – roll back the neck volume a couple of notches, dial in some spring reverb and pick hard near the bridge to be transported to the early 60s or swap reverb for slapback echo and wind back the clock even further. 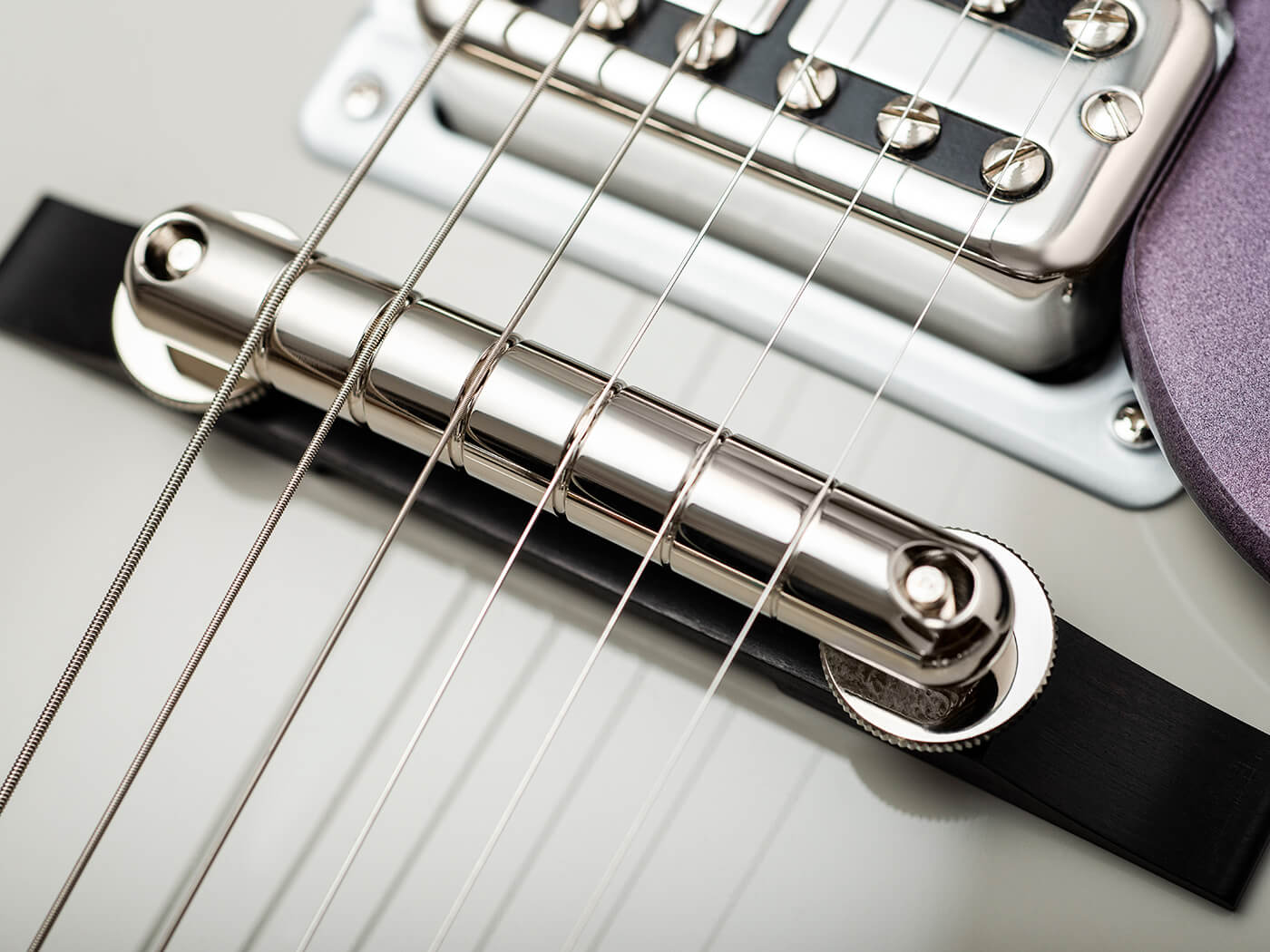 Rockabilly and vintage pop are typically well catered for, but with the bridge pickup at full throttle, you’ll find the classic crunch of Messrs Townshend and Young, and even the stinging attack of Jack White. In the neck position, modern pedal junkies will appreciate the clarity offered by the Penguin in conjunction with potentially swampy delay and reverb ambience. The master volume’s treble-bleed circuit is also exceptionally well voiced – cleaning up a raging tweed amp with the master produces some very pretty and alluring textures indeed, without ever sounding thin.

Shred pyrotechnics aside, whatever style you seek to wring out of it, the Penguin provides a smooth ride. There’s a seamless feel where the rounded fret ends transition into the binding and a slim, nicely tapered neck profile that disappears in the hand. The armrest looks very cool but be warned that you might find yourself catching your sleeve or bare forearm on its front-end lip – that said, if this guitar appeals, we think you’ll agree that the look is worth the risk.

There are undoubtedly more affordable ways to get an eye-popping Gretsch experience, and some of those make further concessions to modernity in terms of ergonomics and hardware – not least the G6129T Players Edition Jet FT (£2,049) in Red Sparkle we reviewed in issue 381. However, if you want an instrument which offers the unadulterated decadence of the business class experience along with hauntingly familiar tones from your record collection, this bird is the only way to fly.